At GDC 2015 last week, Richard Carrillo, Lead Game Designer for Ubisoft Toronto, gave a talk about choosing the right people for the right positions on your game design team. He has a theory that there are four different types of game designers: Visionaries, Salesmen, Empaths and Analysts.  For designers, they don't have things like demo reels or practical programming experience. Hiring designers can be a frustrating experience. "At the end of the day, experience is great, but I'm actually looking for a specific type of mind...one that isn't my own," Carrillo said. This theory should prove useful to three types of people: producers, recruiters and designers. Producers to understand their design team and what's missing, recruiters to understand the role and what they should be looking for, and for designers to understand themselves, their peers and where they fit in. How they solve problems and what questions your designers ask when they hit a wall is how the type of designer they are emerges. There are four designer types for a reason. Four is based on the different perspectives that are available when designing systems. You'd work on high-level or low-level problems, build from the top down, or the bottom up. 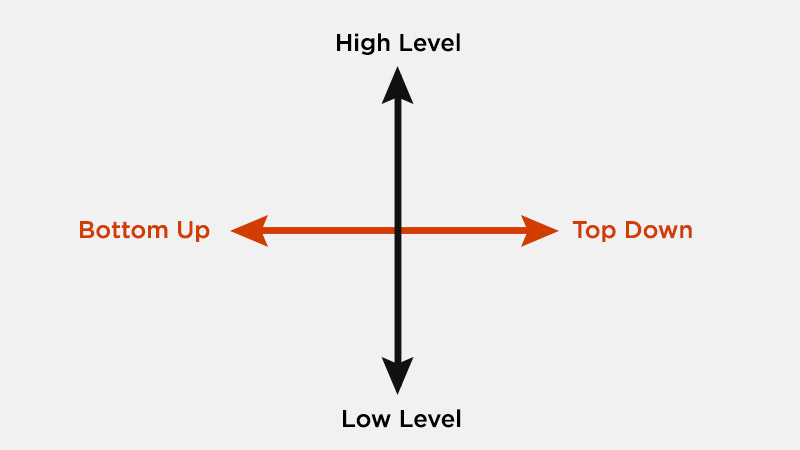 Talking about a high level of the system you'd think more abstractly and more about the "big picture". Low level thinking deals with exact and specific details rather than overview. Bottom up vs. top down relates to gameplay experience.  Are you looking at it from the player's perspective, or bottom up? Or are you looking at it from a system's perspective, or top down? According to Carrillo, that can also be simplified to be direction vs. gameplay and player vs. systems. 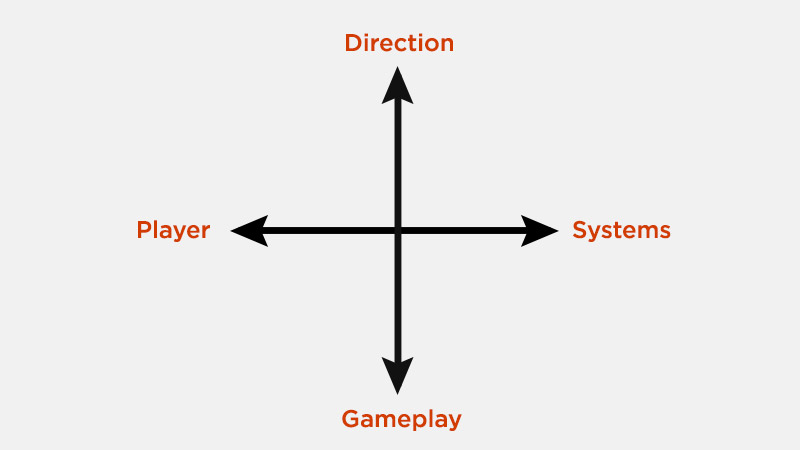 Are you looking at it from the player's perspective or from the system's perspective? Each of the game designer types fits snugly in one of the quadrants. 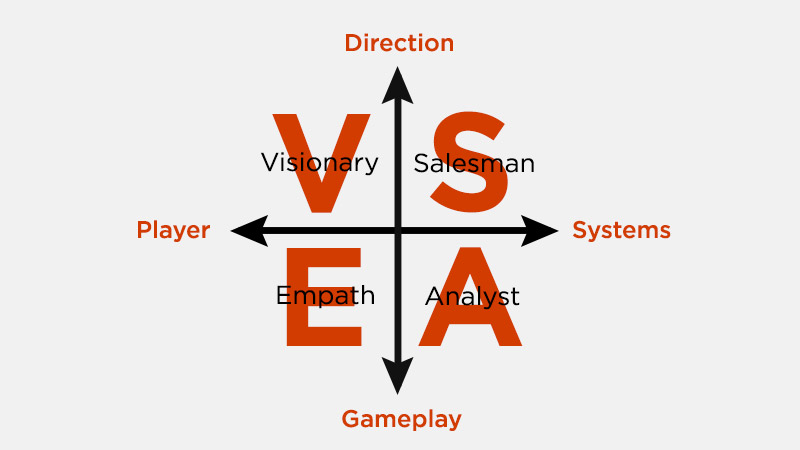 A designer that's focused on player fantasy (the player's narrative and control in the world) and self expression is a Visionary. The Visionary starts with feeling, asking questions like, "What's the player feeling right now?, What's the mood?, Does the player feel special?, or What's happening in there?". Those are the questions that they ask when approached with a roadblock. Their strengths are: Their biggest weakness, according to Carrillo, is they can fall in love with a world the audience doesn't care much about. They're also an artistic type of designer.

The salesman balances out the Visionary. They're goal oriented and completely focused on the consumer while taking into account market trends. The questions they ask when they're struggling with something are, "What are the goals of this?", "What are some examples in other games?". Their strengths are: However, they can unfortunately often get the team excited about what's really a lackluster experience.

The Empath works well with the gameplay experience from the player's perspective. They're focused on fun and can really see the world through the player's eyes. "A great Empath can play through an experience a hundred times and every time they play through it they're imagining it's the first time they ever saw it," Carrillo said. "That's a really hard skill to have, and to be honest it's great, especially if you're the one who designed the system." Their strengths are: Sometimes the Empath can end up with an experience that's fun, but rather shallow. There might not be enough depth for meaningful interactions.

The Analyst designer is focused on system analysis and long-term challenge and depth. They're direct counterparts to Empaths. Everyone probably knows who the analysts are. They think about gameplay from a systems perspective. They're generally asking how systems work together, if the game is challenging enough, and if there's enough depth. Their strengths are: "If your players are hooked on the game, it's the Analyst who's going to keep them hooked that much longer," Carrillo said. "Their weakness is they may build a 'spreadsheet' experience with a steep learning curve." Another thing an Analyst might do is blame poor test results on poor players and choose challenge over accessibility.

The easiest way to identify these types of game designers is within your own teams first, and you'll then quickly be able to pick them out in the early portion of interviews. These topics should help you to figure out the types of designers you have on your team.

World IP World IP is the current state of the world, current topics, the history of the world, and is a broad topic. It's a super easy way to spot a Visionary. A Visionary will think abstractly about World IP. They might say something like, "What if the world wasn't round. What if in our game the world was flat, how would that change everything?" The other designers on your team would be confused and not even know how to react to something like that. The Salesman will think about trailers because the trailer shows the best and most exciting parts of the world. The Salesman wants to think about how to package the game experience and how it's more meaningful to the player. The Empath will always think about fun and in a World IP will worry about how the narrative can get in the way of fun. The Analyst is almost the extreme opposite of the Visionary and you might encounter a lot of conflict between them. Each perspective is needed to build a full game experience, unless you want to go a specific way and not design for the masses. Monetization Each kind of designer type will have strong feelings about monetization. Monetization is something that the Visionary divides from the player experience because it breaks the fourth wall. They'll separate from what they're thinking about. The Salesman will think about interesting hooks and things that would get the player excited to buy your game. The Empath thinks monetization puts a wall between the player and fun so they say "no" to monetization. The Analyst thinks about the economy and what other games have done. What they say vs. What they mean "You're in a room and the Visionary says, 'I want a weapon that kills everything with one shot'," Carrillo said. "Generally the other designers don't know how to react." What they're really saying is that they want to player to feel more powerful in the game. The biggest issue here is that the designers like to bring solutions to problems before everyone's even agreed that there is a problem. A Salesman might suggest a weapon like a sniper rifle once the Visionary has explained him or herself.  The Empath will think about a skill component and the Analyst will think about at what point in the game you'd get a powerful weapon like that. Once you understand where your designers ideas are coming from, you'll be able to better understand their ideas.

How to Build a Perfect Team

Producers Producers should know the types of designers and which ones they're missing. Also, producers should think less about specific roles, especially since roles can always shift. They should also build an environment where designers can challenge each other. "If you notice that two designers work really well together, they riff off each other well and they always come to good conclusions together, then chances are they're the exact same type of designer and you don't need them working on the same systems," Carrillo said. "You want an environment of people that challenge each other, where people are asking different questions." Producers should know what's missing by looking at the current state of the game. Gaps will present themselves and you should be able to see what type of designer you need to fill them. If you're missing two types of designers should be extremely obvious. Recruiters Know the types of designers and which one's you're looking for by understanding your game. For example, if you want an easy UI, then you'll probably need an Empath, since an Empath cares most about accessibility. If you need something complex, you'll need to find an Analyst. The role isn't as important as its purpose. Startle designers in their interviews. Ask them questions like, "Why does our game suck?". Give them fresh design scenarios or problems to solve in their interviews and have them think them through out loud. Their first answer is usually the most important because that's is what's at the top of their mind and will reveal their type. Designers Designers need to understand their own type and which roles they work best. They should also follow design theories that work best with their type. If they start to understand the other types of designers, they can begin to respect them on a new level because they know the other designer's perspective.   Designers can have secondary types too. They would more highly identify with one type, but they'll understand a second type as well. Once you pinpoint the types of designers you have on your team, you'll be able to understand their intentions and what matter to them. You'll be able to better communicate with them and understand what motivates their ideas.