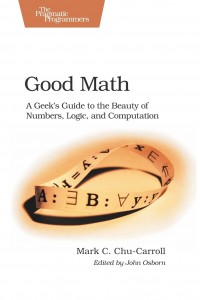 Mark Chu-Carroll likes math. No, he really, really, really likes math. If you want to know how much he likes math, check out Good Math: A Geek's Guide to the Beauty of Numbers, Logic, and Computation, in which he tries to pass on his passion to the rest of us. It's not a book one should even try to read in one sitting — your brain would melt. Not only is Chu-Carroll in love with math, he has a PhD in it, so he's light-years ahead of most of us. Fortunately, along with his passion, he has the desire to explain the concepts in layperson's terms, or at least in terms the average geek would understand.

He starts by defining "number" in its several forms. We have cardinal numbers, which count how many items there are in a group (there are ten horses in the race), and ordinal numbers, which tell you what position an item is in a group (the black horse came fourth). Pretty straightforward stuff. But then he starts defining types of numbers, beginning with natural numbers (positive whole numbers, starting with zero), using axioms. For those of us whose formal math training is in the distant past, axioms are sets of rules that, says Chu-Carroll, remove all ambiguity about what is possible and how it works. For example, natural numbers are formally defined by a set of axioms called Peano arithmetic. Feeling faint yet?

In subsequent chapters he discusses types of numbers:  integers, real numbers, irrational and transcendental numbers, and then segues to what he calls funny numbers. These include zero, e (Euler's constant), the imaginary number i (the square root of -1), and the Golden Ratio, phi (which he says really irritates him). I told you he likes math. One interesting section is all about logic. No, not Vulcan logic — Chu-Carroll starts the section with a chapter called "Mr Spock is Not Logical" — but mathematical logic. After defining and discussing the rules of logic, he moves into proofs, and from there gets into familiar ground for us: programming with logic. Using Prolog, which may not be quite as familiar to many, Chu-Carroll walks us through the syntax as well as the math. He also includes routines in Scala and Haskell.

He finishes the book by discussing the problem of whether we can reliably tell if a program will ever halt. Yes, that is a legitimate problem, and an interesting one. My one gripe about the book's organization is that, although it has a table of contents and a bibliography, there's no index, so it's difficult to find all mentions of a term or concept. Good Math is not an easy read, but if you're curious about the subject, it's a rewarding one. Because Mark Chu-Carroll really loves numbers, and he wants us to love numbers too. Good Math: A Geek's Guide to the Beauty of Numbers, Logic, and Computation, by Mark Chu-Carroll. Pragmatic Bookshelf, 2013. $34.00. ISBN: 978-1-93778-533-8.

Lynn Greiner is a freelance journalist specializing in information technology and business topics. She is also an IT professional, giving her real-world experience that allows her to cut through the hype and address topics that are relevant in the business world. Her articles have been published in both print and online publications, including itWorld Canada, Computer Dealer News, CIO.com, DevSource, Canadian Security, ACM netWorker, Security Matters, GlobeTechnology.com, Canadian Technology and Business, InformIT, Computing Canada, and many others. Find her @LynnGr.