5 Common Creative Myths and How to Overcome Them 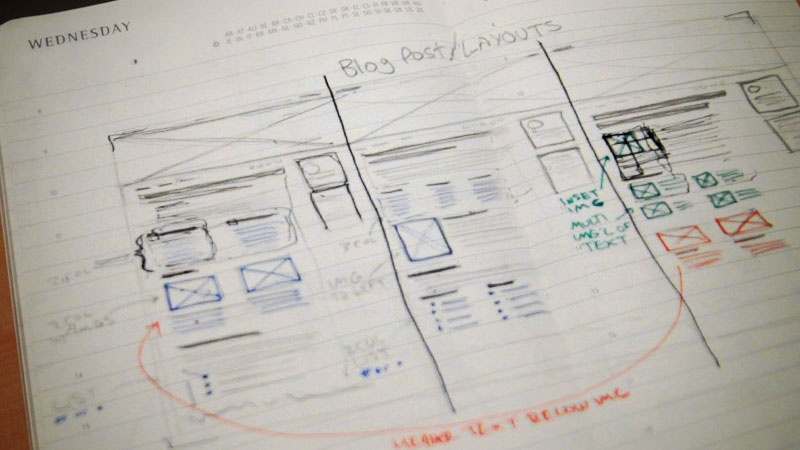 Sketching can be a great way to capture ideas.[/caption] If you're someone who can always remember every idea you have, more power to you! However, if you're like most people you might have ideas for your current project when you least expect it - when eating dinner, watching a movie or even in the shower. Simply put, the human brain is really good at remembering things at the most inconvenient times. I'm sure you love your smartphone as much as I do, but sometimes by the time I pull out my phone and open up an app to jot down or sketch out the idea I've forgotten what the idea was. A really easy way to avoid losing those great ideas is to have pen/pencil and paper ready. This is another one that certainly isn't limited to creative artists, but we've found that for some reason many artists tend to regard words as their natural enemy. If this is you, kudos to you for making it this far in the sea of words in this article. Unfortunately this avoidance of words can result in a lack of learning how to take good notes. As scary as words may be, don't let this stop you from taking notes because good notes can free you from being forced to be creative only when you sit down at your desk. Remember, too, not all notes are words. Since taking notes is really just intended to be a way to capture ideas, whether they're yours or someone else's, something like capturing ideas for a site design like you can see in the image above can be seen as just another way of note taking. So don't limit yourself to words in your notes. In many cases it can be a lot easier to sketch your notes. Either way, the point is to jot down or sketch out the idea really quickly to be able to get it out of your head. To do this, try having a small notebook with you at all times. There's even water proof pads if your best ideas come in the shower. The point here is that everyone can benefit from taking notes and creative artists are certainly no different. Next time you've got a great idea for your shot you'll be ready. Once you've done that, try going the next step and snapping a photo of it with your phone and sending it to yourself. That'll remind you when you get back to your computer to work on the project of your amazing idea. "I can't draw well, so I can't be creative." By this same logic if you can't write a masterpiece novel you must not be able to take notes, right? It might come as a shock, but not everyone in the CG industry is a master sketch artist. Just like taking notes is a far cry from writing a novel, being creative in today's technology-enhanced world means so much more than drawing. From 3D modelers, rigging TDs and animators to compositors, game developers and motion designers, there's an incredibly wide range of skills that are needed to be creative. Believe it or not, for many of those roles being a master at drawing is not something that will make or break your ability to be creative in those roles. The more you think about it, though, it shouldn't really come as much of a shock that the skill it takes to draw well is completely different than the skill it takes to push and pull vertices or to animate a character. With that said, there certainly are some creative roles where drawing is a necessity. Fortunately, for most of those roles it should be pretty self-evident. For example, creating a character concept for 3D would be tough to do without some drawing skills. However, the process of taking that concept and translating it into 3D takes a completely different skill. To sum up this myth, it's important to keep in mind that even though drawing may not be a requirement for many creative roles, it certainly can be helpful in just about every role. The more you invest in becoming better at drawing, the easier it'll be to use that skill to sketch out quick shots as an animator before jumping into 3D or maybe even sketch out some ideas to communicate how you might tackle a composite with a fellow artist. In those instances, drawing is a means to an end and not an end-all if you can find another means to reach that end.   Conclusion Although there's a lot of myths out there that go above and beyond those we've looked at so far, for just about all creative myths there's one common denominator. They're usually a self-fulfilling prophecy. For example, if you think you don't have the time to do something, you won't make any effort to make the time to achieve your goals and, by extension, you'll never have the time to hit those goals. The best way to avoid falling victim of any creative myth is to believe in yourself. Set yourself a goal, figure out how you need to get there and along the way don't let any sort of barrier stop you from reaching the goal you've set for yourself. You can get an idea of how this principle in action with our recent interview of Allan McKay. When you read the interview, you'll get a great sense of how Allan set a goal for himself of working in the VFX industry. It may have seemed like a pipe dream at the time, but it was achieved thanks to what boils down to a ton of hard work and the determination of not letting any barriers get in the way. What sort of barriers are keeping you from reaching your creative goals? Or how did you overcome some of these (or other) common creative myths to reach your goals? Let us know in the comments below!