If you've ever wanted to do traditional 2D animation in Photoshop, you'll be interested to hear that a new version of the free Photoshop add-on AnimDessin2 v2.0 will help you do exactly that. It brings a simpler, more traditional animation workflow. Developer Stephane Baril designed the add-on's interface to closely mimic the workflows of traditional animators like Disney animator Glen Keane. However, the Adobe plug-in's reference to old-school animation is only one of its impressive features. 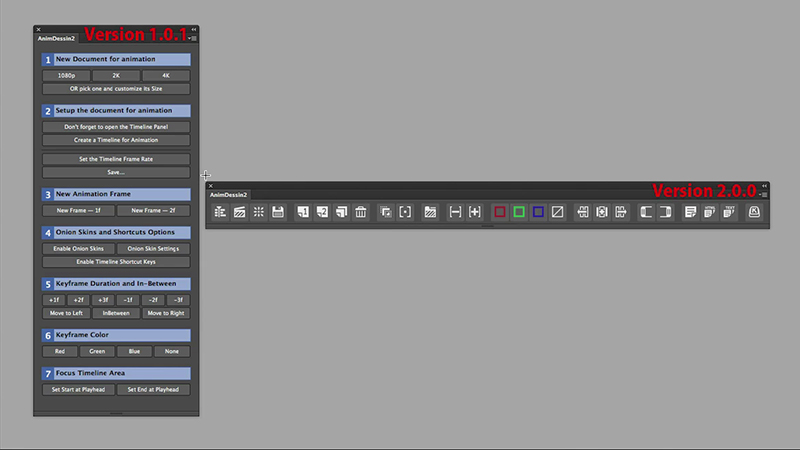 Baril has simplified the toolbar of AnimDessin2's previous version, which was large, blocky and text-driven, to a more horizontal, streamlined layout that exclusively features buttons directly above its timeline. ADv2's time line, like version 1, resembles the easier, more user-friendly iMovie software that also uses large blocks to represent individual frames. In AnimDessin2 v2.0 indicators function similarly to sheets of paper that animators like Keane would have use, placing one sheet on top of the other. Working within version 2's timeline removes the need to continually interact with Photoshop's Layers window, and places the controls closer to your canvas.

Baril's layout controls include a "+1" button that allows you to quickly add one new frame to your time line or a "+2" for multiple frames. These button choices let you quickly add frames as you decide whether to speed up or extend your animation by adding one, two, or more frames for each motion. Another interesting feature of the add-on is how easy it makes cleaning up your initial sketches in a sequence. It works by letting you add another layer of frames for your sequence above your existing one. Next, you can reduce the original sequence's opacity, and re-draw your entire sequence again. Essentially, this feature let's you transform your entire original sequence into an onion skin, which you can then retrace replacing your old one with a newer, smoother, more accurate sequence. AnimDessin2 does have some limitations like not being able to select individual illustrations on the canvas. Instead, you must hold down Command (Mac) or Control (Windows) in order to select individual frames. However, for a free Adobe add-on, AnimDessin2 is a great choice for beginners who want to use Photoshop in a more intuitive, more traditional way when rendering their drawings. Check out Baril's demonstration of AnimDessin2 v2 below and let us know what you think in the comments.