Blackmagic Design has just rolled out yet another release of their already popular software, DaVinci Resolve. While version 12 focuses on improving many aspects of editing and functionality, it also greatly expands the software’s color correction capabilities. With over 80 new features in DaVinci Resolve 12, it’s almost impossible to cover everything in depth in one article, so I’ll focus on some of the more exciting aspects. You can visit Blackmagic’s website for the entire list of features.

While the main focus in this release is on the edit and color pages, there are some general improvements that really help things move smoother throughout the software.  The UI is now much more user-friendly and customizable while offering layouts for pretty much any scenario. While you still can’t manually move the windows from one place to another, you can easily choose how many you’d like open or close. Whether you’re an editor, DIT or colorist, version 12’s has a UI setup that will work for pretty much anyone. With Resolve becoming more and more popular with studios, a lot of people have been having trouble with the limitations of screen sizes to run the software.  However, Resolve 12 can now scale all the way from a 13” Macbook pro retina display to a 5K retina iMac. You’ll be hard pressed to find a professional that doesn’t own a monitor capable of handling this software. The media management has been improved as well. There are now options to copy, move or transcode files as well as a simple archive and restore option. All the common features we take for granted in other NLE software has all been seamlessly incorporated into Resolve 12, and the workflow seems much more natural and intuitive.

Ever since the Resolve 10 release, Blackmagic Design has been making a push towards editing to simplify the ever complicated handoff between offline and online editing. In this release, they have really stepped up their editing capabilities and are nearly on par with editing programs like Avid, Final Cut X, and Adobe Premiere.  Probably the biggest addition into the editing world for Resolve 12 is the multi-cam editing functionality. The execution is similar to other programs and works quite well. Syncing clips by timecode, in/out points, or audio are all options. It’s intuitive and responsive while showing you everything that you want to see in a multi-cam editor. 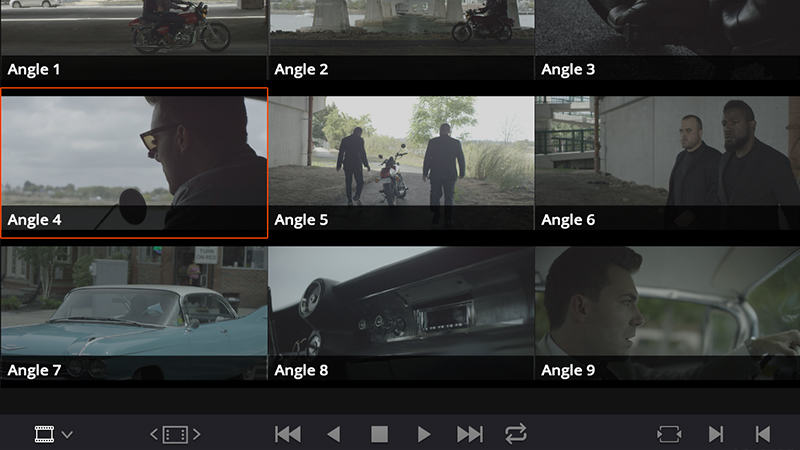 In order to be taken seriously in the market, Resolve 12 has had to meet or exceeded expected performance of traditional NLEs. Things like guaranteed real-time audio playback for all playback speeds, advanced audio/video JKL playback options, and simplified track selection for copy/paste operations are all implemented in this release. One of the new features that will really help out editors in the color page is the “Shot Match to this Clip” function. During the editing process, there’re often requests for a rough color pass to make the footage more presentable for client review. The shot match option lets you grade one clip then easily apply those same settings across an infinite range of other clips, which allows you to quickly get all shots to a good starting point. It’s like a down and dirty dailies pass that will make your edit pop. 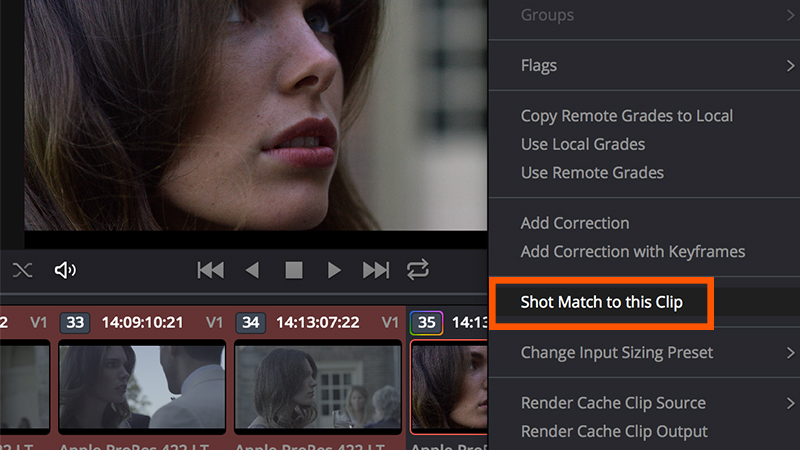 Basically, anything you expect an NLE to handle, Resolve 12 does. I should also mention that its organizational options have been greatly improved as well. Resolve 12 now offers “Smart Bins” which are simply customizable metadata tags placed on clips that can be sorted through specific filters. Very useful stuff for everyone involved in the post production process.

Resolve has always been a powerhouse in the world of color grading, and version 12’s new features only bolsters that already impressive functionality. There are lots of features that streamline workflow for all types of users. It’s obvious that Blackmagic has taken lots of feedback from a myriad of colorists and really listened to what they had to say. Organization, optimization, and overall workflow is greatly improved. Probably the biggest implementation in the new color software is the DaVinci Resolve Color Management that lives in the settings tab. Basically it’s a new color science that helps define individual color spaces and bring them all to a common ground. It greatly assists in the color management of multiple clips with different color spaces and helps simplify the beginning stages of the grading process. For example, if you have clips that are Rec709, LogC, and SLog, you could place them all into a unified color space that allows for a neutral starting point. It’s not the flashiest upgrade in the word, but it is extremely effective. It functions like a non-destructive LUT that levels out the different color spaces. 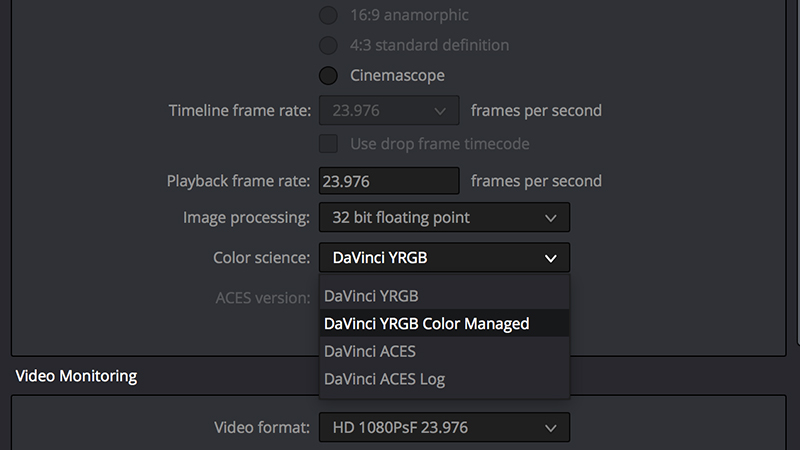 The curves in Resolve have always been a powerful tool that’s gone through several iterations since version 9, but in version 12 Blackmagic has finally nailed it. By having the YRGB curves placed on top of each other and the ability to add bezier handles, there is unprecedented precision when fine tuning your curves. They’re the largest curves ever offered by Resolve and you shouldn’t have a problem seeing all the details that you need to see in order to draw the perfect curve. I was a little dubious about them at first, but after using them a little bit, there’s no way I’d go back.

The one feature in Resolve that has always provided the “wow factor” is the tracking tab. With the ability to track windows or stabilize using PTZR controls, you’re able to stick shapes to images with great accuracy. Now, with the new 3D perspective tracker option enabled, you can easily track images off screen and account for inclusion of outside elements. And if that doesn’t nail the track you need, you can now enter the more simplified frame key frame tab which is a much more user-friendly than version 11. 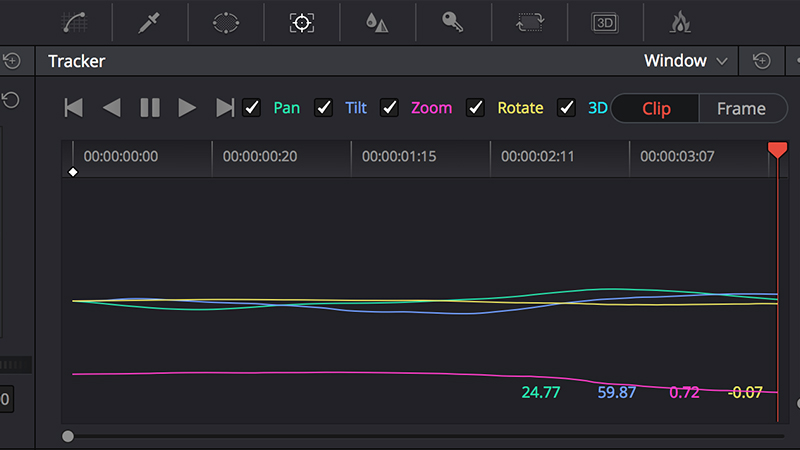 Another new feature in the color page that has me excited is the 3D keyer. Along with Resolve’s traditional keying options (HSL, RGB, and LUM) this new feature gives you the ability to really nail down almost any particular color that you want to isolate. So far in my tests, I have found that it works well with skin tones and exceptionally well with green/blue screen footage. Combined with the new “Despill” option, this can give you as good a key as most high end compositing software. 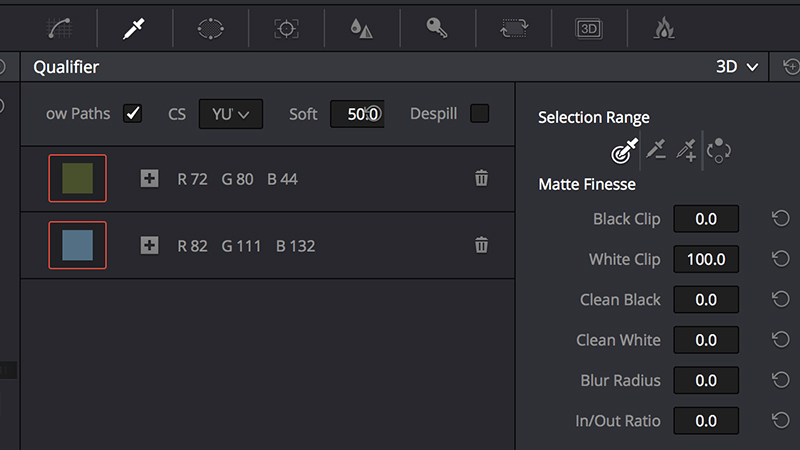 While I’ve tended to focus more on the new color tools, the editing features should not be downplayed. They are very powerful and have the potential to pull some editors away from traditional NLEs. I feel this software is fully capable of giving editors what they really need. As a colorist I was a little concerned with all the attention that the edit page was receiving. I mainly use Resolve as a color grading application, and I didn’t want to see Blackmagic abandon its roots. That being said, I feel as though they brought a lot to the table in terms of color grading and am quite happy with all the new features. Some honorable mentions are the Append node to selected clips, convert window to bezier, and cleanup node graph, all of which will have a huge impact on my everyday workflow. There are a couple of things that were reorganized and moved around from version 11 that I’m not a huge fan of, but I’ll get used to it. Any new software takes a little getting used to, but overall version 12 is a great new release. For the third year in a row, Blackmagic Design has managed to make their Resolve software more functional and user friendly while giving editors and colorists what they need to do their job even better.