Understanding typography is vital to being successful in graphic design. The choices that you make with your typography can mean the difference between a good design and a great one. The first step of great typography comes in picking the right typeface. Different typefaces can all convey their own feelings to the viewer. As a graphic designer  you will inevitably work on a project that involves a lot of text, whether that is a book layout, a magazine layout, or even a catalog. So let's take a look at some basic fundamentals of typography, and how to determine the right typeface and layout for your next project. Anatomy of Letterforms There are literally thousands of fonts out there and not all are going to be appropriate for your project. The first step to knowing what font to use for your project is to know what makes up type. 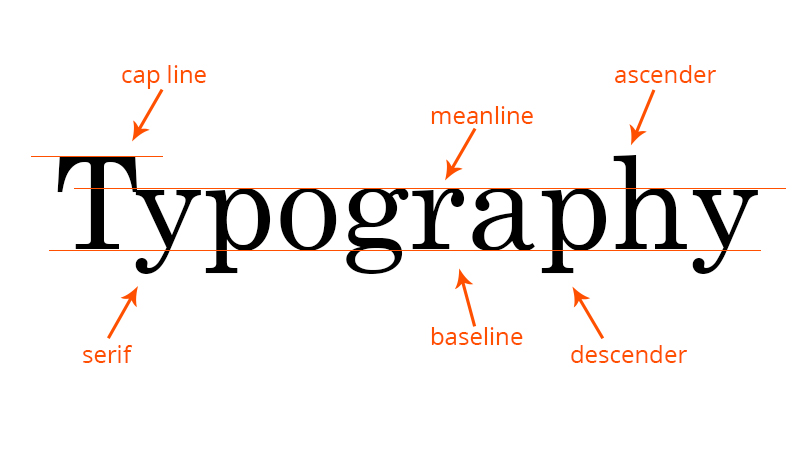 Cap & Base Line The boundary that defines the top of an uppercase letter is called the cap line. The line that defines the bottom of the letters or where the letters sit is called the base line. These of course are not visible but we've used the image above to clarify. Meanline The meanline represents the height of all the lower case letters. Ascender There are some letters like h, b and f that go above the mean line. These portions of the letter are called ascenders. Descender Similar to an ascender, a descender is the portion of a letter like p, q, y and g that go below the baseline. Serif The little foot shapes or extra strokes that are typically on letters are referred to as a serif. You may be familiar with a sans-serif font, and this just means the font does not have those extra strokes added to the letters. The term comes from the French word sans, meaning "without". In this case, without serifs. 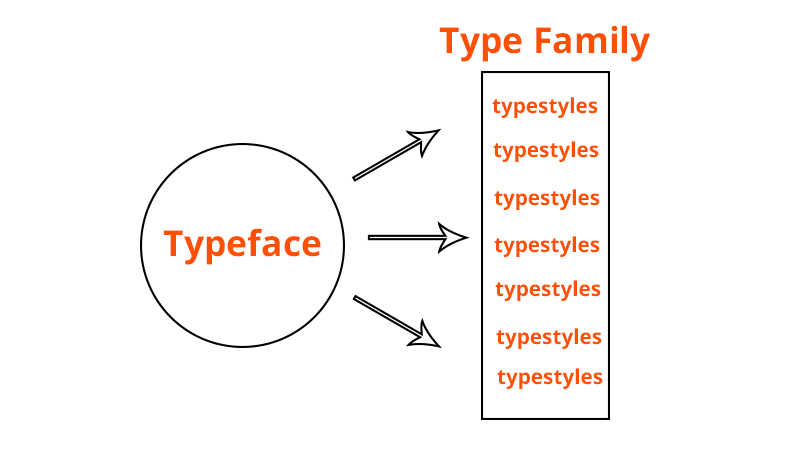 You may have heard several terms tossed around when learning about typography like typeface, typestyles, and type families. Let's break these up so you can understand the differences and become more familiar with each one. The first one is a typeface; a typeface is a specific design of the alphabet. This design can include not only letters but also numbers, punctuation and symbols. Within the typeface are type styles and there are typically multiple type styles in a typeface. Of course, there are some typefaces that only include one type style. Those type faces are often times more decorative and have one intended use. More type styles within a type face make it much more versatile. For example, a type face with multiple type styles could mean the ability to apply things like bold, semi bold, italic and more to the typeface. If you were to bring all the type styles within a typeface together as one whole unit, this would be referred to as the type family.

Not all typefaces are created the same. One may be very thin, the other very wide. Different type faces can take up a different amount of space on the page. As a designer one of the aspects of type that you need to be familiar with is the line spacing. Line spacing simply means the vertical space between lines in the body of text. Line spacing is commonly referred to as "leading", a term that came from the days of metal type setting. To add extra space between rows of text they had to add strips of lead between the rows and the term has stuck. There are two tools for adjusting the spacing between the letters in each word. The first one is tracking. Tracking adjusts the space between each letter in a word all at the same time so you can maintain even spacing between each letter. The second tool is kerning, kerning adjusts the spacing between just two individual letters in a word. For example, you might like the overall spacing for the letters in a word, but you may want to get in there and increase or decrease the spacing between the first and second letter of a word. Kerning allows you to do that. 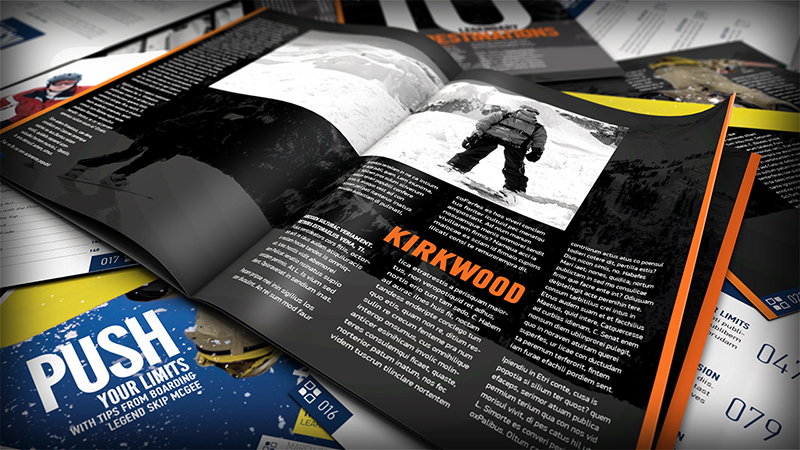 When designing some sort of layout, for a magazine or any other type of project where a large block of text is required you need to understand the expectations of the readers. The readers are going to want to be able to read an entire page of a layout effortlessly. There should be nothing on that page that interferes with the ability to read the page easily. The first step for creating a well crafted page layout is finding the right typeface for the project. You want a typeface that has legibility; legibility in typography refers to how one letter in the alphabet can be distinguished from any of the other letters. Finding the right typeface for a layout is quite a bit different than finding a typeface for something like a logo, where it's more about visuals rather than readability. If you're working on a layout that has a significant amount of copy on it you want to make sure that the typeface you are using is intended for that use. For example, a typeface that is more intended for a headline will not work well for the body of text within a layout. Typefaces that are fun, when delivered in large quantities will get very tiresome to look at. A good rule of thumb to go by when choosing the text for a layout is to stick with a good serif font. It is said that a serif type face is one of the easiest typefaces to read. A great way to get an idea of what typeface you should be using for your layouts is to look at what's been done in the past for inspiration. That way you can see what's worked well and what hasn't work very well based on your own preference. If you want to see the types of fonts major companies are currently using in their layouts and designs check out Fonts in Use. Before you start your next layout or design take a consideration of the type of font that will work best for the particular project. With the right typeface you will be sure to take your design from good to great! To learn even more about typography check out the Fundamentals of Typography course.