Make Your Graphic Design Compete With The Big Boys

Yesterday, production company, Gentleman Scholar, released a new commercial for Hyundai's new Blue Link feature, which provides emergency assistance, destination services, and remote access for its customers. All of these benefits can be summed up in the ad's tag line: "Navigate, Connect, and Discover." What is interesting about the ad's visual approach is how Gentleman Scholar used their flat visual design, smart transitions, and metaphorical iconography to subtly communicate these ideas. The following article will delve into the specifics of how their design strategy was executed and how you can incorporate the same approach into your own work. But first, watch the ad below.

The first thing you will probably notice is the ad's dominating flat design, which uses easily recognizable shapes and types of people to quickly convey meanings. Below is one of the ad's main introductory images you encounter as the vehicle does an aggressive 180 and comes to a stop. Several easily recognizable types exit the vehicle. On the left are the two body guards, coon-skin-hat-wearing Lewis (or Clark), the in-the-know "socialite," and the valet-turned-butler. They are characters that make an appearance in the story and represent convenience and safety. Balancing the images on the right is another group of quickly identifiable types: the basketball player, viking, astronaut, ballerina, and tennis player. It's important to note that this group never makes an appearance in the ad's main action like the group on the left. However, even though this group is not narratively important, they are used to represent active and energetic types of people that have very physically demanding and adventurous jobs. Both groups are important in visually conveying the balanced ideas of adventure (right) and safety (left). 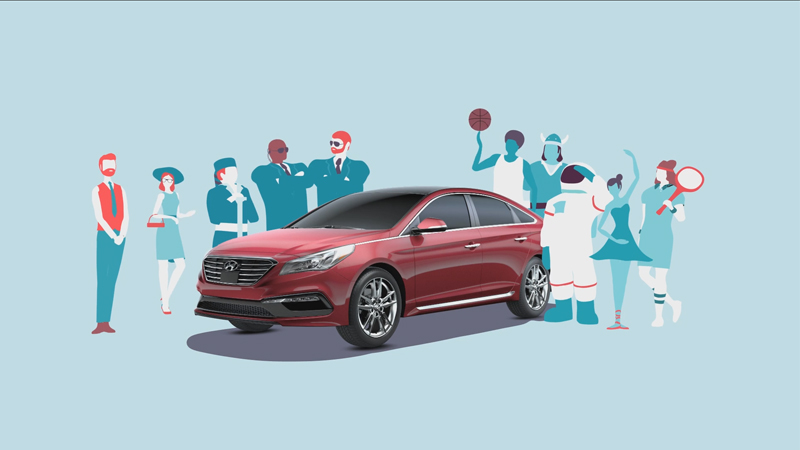 While the image's composition is effectively balance, also are the contrasts between the green-and-red color scheme and the flat vs. realistic (skeuomorphic) design. The lighter blue background helps bring the characters forward. The character's flat design (i.e. they cast no shadows) is heavily contrasted with the three-dimensional look of the realistic Hyundai, making it "pop". The car's central location and realistic rendering draw our eyes to it. Our look is also directed by the compositional lines that are created by each group's relative height. The tallest characters are near the center of the image. Overall, this flat vs. realistic design is used through the ad to continually draw our attention to the red Hyundai. It's an approach that uses color theory and balance in composition very effectively.

To emphasize the concept of connectivity, Gentleman Scholar used some really creative transitional devices to "connect" every scene within the ad. Several times these transitions are accomplished graphically and take several different forms. In one transition, a full-frame image of the butler changes into a smart phone screen of him holding a fancy covered dish. In the comparison below, you can see how the butler's overall image size shrinks while the street background becomes the phone's background. While his image shrinks, the butler remains centered within the scene, which helps to give consistency and stability to the rather chaotic transition. There is also a clever animation added to the butler making him react as if falling when the phone is dropped on the table.

The ad’s designers also used interesting blurs and “drip” effects to transition between one character and another. This occurs when all of the characters are getting into the car and also when the valet transforms into the butler. You can see in the image below the change mid-way through as the valet’s brown jacket and full beard fall away in a colorful smear. This technique gives a playful feeling and bouncy quality to the images overall. 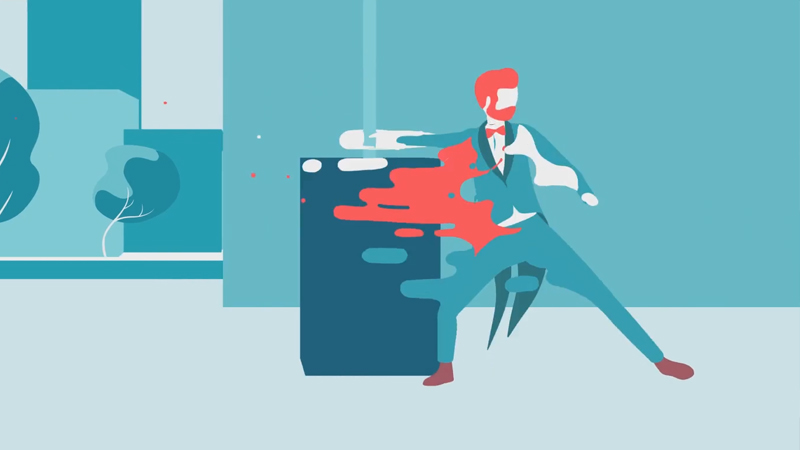 Other transitions that help connect scenes use vertical lines made from objects and people to create a division that “swipes” the screen from one side to the other. For example, the relaxing pool-side lounge is transitioned into a desert landscape via a palm tree that moves from right to left. It is within the desert scene that the Hyundai driver has an accident in what looks like the middle of nowhere. The palm tree helps smoothly transition between these two visually opposing images (water vs. desert) along with contrasting the ideas of relaxation and togetherness versus abandonment and anxiety. 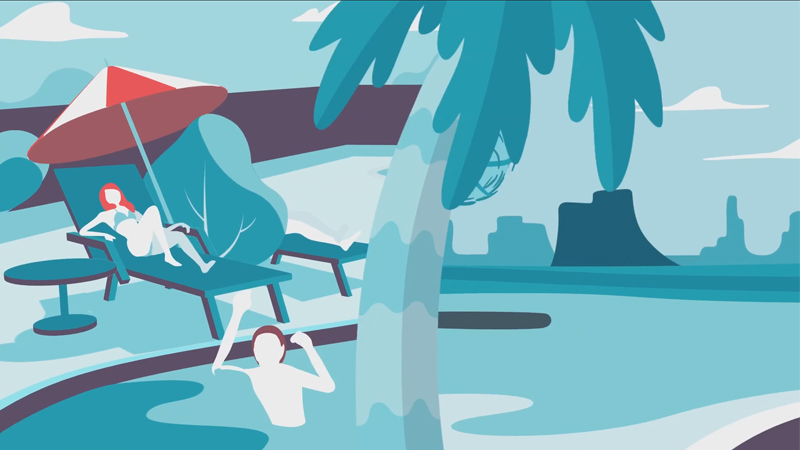 Another type of transition used is a kind of graphic match cut that combines similarly shaped objects or compositions to help connect two scenes. This occurs in the shrunken butler scene previously mentioned when the coffee cup, spoon, and knife on the table morph into the Hyundai’s power button, thermostat and door lock respectively. Again, we see the transition from ideas of comfort and leisure to issues of safety and convenience both visually and conceptually.

In another graphic match, the combined image of an architectural brace of a satellite and the Earth suddenly become the wench arm and spare tire of a tow truck on its way to rescue the stranded motorist. This specific transition is even more effective because it appears seamless. There is very little actual physical change noticed when moving from one to the other.

The ad’s use of character types and object iconography are metaphorical in that they attempt to directly compare two different things. The ad itself is aptly named “Metaphors,” and its script (voiced by The Dude himself) continually states one thing “is like” another. The ad’s comparison of two different images is often used to emphasize the main themes of connection, navigation and discovery.

For example, the common iconography of the manly body guards, with their secret-service listening devices and dark sun glasses, is directly compared to a “tween girl” through the image of the phone. It’s the tween’s ability to text “O.M.G.! I need a tow truck!! D:” that provides an extra sense of security and cellular “connection” to civilization. Forming the image of the body guard texting on a cellphone with a Hello-Kitty  cover certainly succeeds in creating humor. However, it also suggests being physically safe (the “body” guards) while being technologically connected (the “tween” phone).

Another image that contains a metaphorical meaning is the “socialite” and her bloodhound. It’s an odd pairing since, as the ad states, we expect to see her “carrying a chihuahua” rather than a bloodhound. Again, the effect is humorous, but there is much more at stake here than just laughs. How are these two similar? They know “where everything is located” just like the Blue Link feature. More importantly, they combine a sense of connection, navigation, and discovery.

The fact that bloodhounds are used to track escaped prisoners or to find dead bodies is used to suggest the product’s tenacity and accuracy. Combining the bloodhound image with the socialite transfers some of that meaning to her. And it’s a meaning that would appeal to some female consumers who view being aggressively up-to-date on all of the hippest places as a desirable quality. 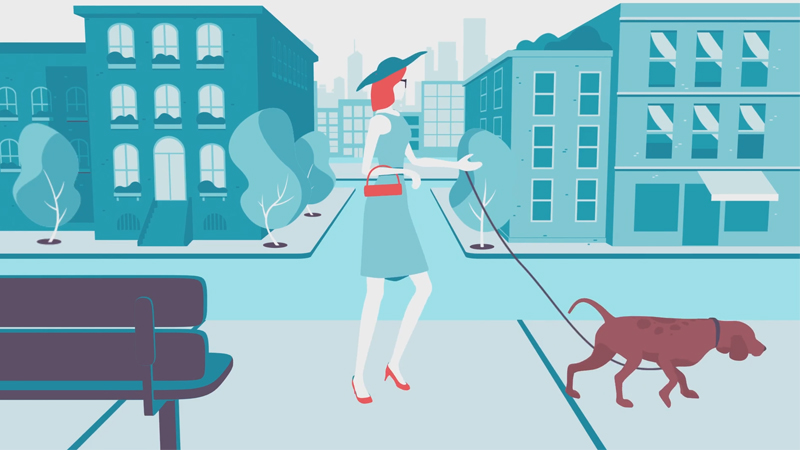 You have seen how Gentleman Scholar uses flat visual design, creative transitions, and metaphorical iconography to subtly communicate the ideas of navigation, connection, and discovery to its intended audience. Their use of a minimalist design accompanied with easily identifiable types of characters helps communicate those ideas within this minute-and-a-half spot. Central placement and balanced compositions add to the ad’s overall visual clarity. Transitions like match cuts help connect images and ideas in a logical fashion. Most importantly, the client’s messages are effectively conveyed through unique pairings of humorous and meaning images.

Try using these types of graphic design strategies in your own work and see if they inspire you to do great things.