How Suite It Is: Adobe Announces New Creative Cloud 2014 Updates

This week Adobe released its new Creative Cloud 2014 updates, which impact 14 new versions of apps ranging from Photoshop CC to Dreamweaver CC. The updates come close to the one year anniversary of the company's announcement in May of last year that it was shifting from a perpetual license to an exclusively cloud-based subscription model for its software. It would be a month later that Adobe would also announce its first updates exclusive to the Creative Cloud line of apps. The move would signal the company's intention to slowly phase in the new subscription model, which was initially met with widespread criticism from customers. In an attempt to showcase the CC 2014 updates, as well as the advantages of its subscription service, Adobe hosted a launch event that included keynote addresses from both CEO Shantanu Narayen and Senior VP of digital Media, David Wadhwani. 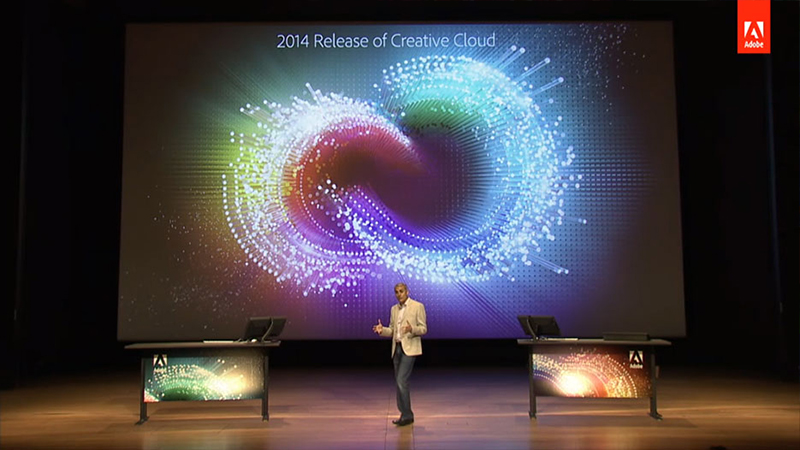 During the event, both execs stressed Adobe's commitment to increasing the productivity and innovation of its customers. Narayen highlighted the increasing evolution of the market place and the inundation of advertising that constantly attempts to engage consumers. "Today, advertising is content and content is advertising," stated Narayen, "all of us, as consumers, expect relevant, interactive, personalized material where ever we are on the go". It's within this complex, evolving, and open marketplace that Narayen believes will be the most "exciting time for innovation." "We have to re-image the creative process," he states, and one of the tools he hopes will drive that innovation is Adobe Creative Cloud. Wadhwani opened with somewhat of a justification of Adobe's move to the Creative Cloud format, citing the huge increase in cloud storage and usage over the past five years as evidence of the future of apps, which includes Adobe. Also, he emphasized the three tech innovations he believed have affected consumers and marketers the most over the past five years: mobile, social, and cloud. "It's hard to imagine any app that ships today without these technologies already built in," stated Wadhwani. It's these three areas of of the market (along with consumer-driven demands of increased performance, workflow, support, and innovative features) that seems to have helped create a theme for the topics and scope of the update launch event. For example, in the user-friendly, web-design app, Adobe Muse CC is now native 64 bit for a clearer picture and to work with Retina displays. Muse has also been tailored more to mobile devices by allowing in-app previews of desktop, smartphone, and tablet versions before having to go live with your website. However, if you need to make updates and edits to your website, you can now do that in-browser whether your site is hosted by Adobe or another provider.

These types of innovative features drew some enthusiastic applause from the launch party crowd. Their popularity being, at least in part, due to the increase in productivity the updates potentially allow users. Increased productivity was one main virtue Wadhwani continually promoted for the new updates. One other way the Adobe updates attempt to increase productivity is in branching out more into mobile devices. For example, Adobe has introduced a line of new iPad and iPhone apps like Sketch, a free-form social sketching iPad app and a similar one for drafting called Line. While the mobile version of Lightroom was first announced a few months ago, with the 2014 update there's a renewed push towards this new method of editing images on the go with iPad and iPhone. Aside from the productivity that comes with the mobility of these types of apps, one of their heavily promoted features is their connectivity via cloud-based support, which really epitomizes the central focus of Adobe's 2014 update package. This connectivity via cloud is best seen within Photoshop CC and its ability to link smart objects across multiple documents at once. This feature functions in a similar way to how iCloud syncs your music and pictures on multiple devices, except what's linked here are smart objects. However, rather than using smart objects just for non-destructive manipulation, Photoshop CC now actually links your smart objects so that you can make broad-based changes to any documents that contain those same smart objects. Other notable features of the 2014 update includes: Adobe's news release states that its updates center around the four areas of "performance," "workflow," "support," and "innovative features", and it would seem that, overall, the company has hit the nail on the head. Also, it appears from the launch event, that Adobe's updates suggest that they're moving aggressively towards the mobile, social, and cloud markets, the place where things can go viral. But, of course, the elephant in the room is Adobe's decision to turn an out-of-the-box software product into a subscription service, a move that will take some time to gain consumers' trust. While the move to "the cloud" a year ago is still a sore spot for many artists, Adobe seems to be in it for the long haul by consistently touting the future of the cloud and the virtue of connectivity in an attempt to expand its new updated service suite. These are only a few of the many updates Adobe has announced. To view more specific updates, go here and then let us know what you think  by commenting below.