The Puppet Pin Tool Is Not Just for Dummies

At first glance the puppet pin tool in After Effects may seem like a low impact tool that you'll probably never care to learn or need to learn. It's perched next to the rotobrush and is the last tool in the bar almost like an afterthought. Surely the last tool in the bar won't be that awesome or life changing or else it would be next to the shape tool or text tool. Well, maybe they saved the best for last. If you've ever seen anyone demonstrate the puppet pin tool, they probably had a cutout of an elephant and showed you that they could move the trunk around very organically. They may have even shown how they could put the trunk on top or behind the rest of the animal by using the puppet overlap tool. If you didn't run home and try it out on your own elephant, then you probably lost interest in ever pursuing mastery of the tool. The opportunity to use the tool probably never showed itself because it doesn't seem practical if you don't fully understand the full power of the tool. Here's your chance to see what the tool can really do. 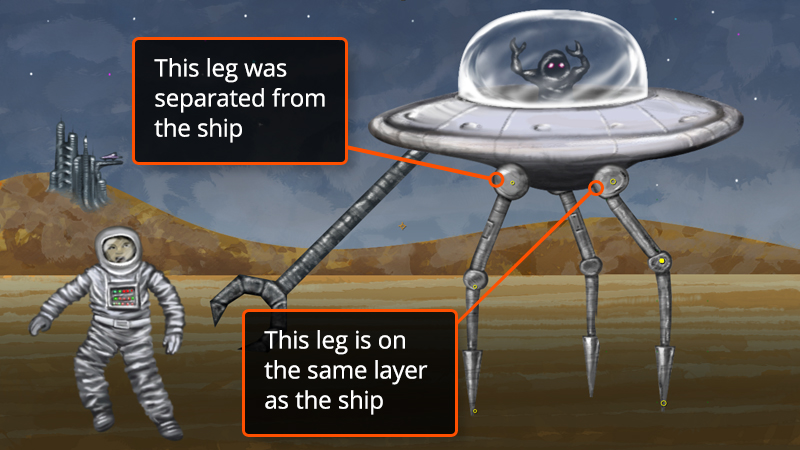 When you decide to take on puppet pinning, it's a good idea to have a clear concept of what you want to accomplish from beginning to end. This way, you won't have to go back and make changes to your mesh, add pins or subtract pins after you've already put time into your animation. If you're happy with how a piece is moving but forgot that you want to bend something another way, adding a pin could wreck your whole scene. So, plan it out. If this means building a better asset to animate, then don't cut corners. For example, if it's going to look weird for an arm to move because the shoulder is going to distort then this is going to limit you. In this case, build your asset with an arm on a separate layer than the body. It may take you a few more minutes now, but you'll be glad you took the time when you have more range of motion for your project.

In a perfect world, all assets would be created equal. However, when using the puppet pin tool, you may run into some issues when working with shape layers and vector layers. The biggest problem with a shape layers is that by default, they are continuously rasterizing. What this means to you is that if you try to transform a shape layer that has been deformed by the puppet pin, then the result will look like the mesh is staying in one place while the rest of the layer does its own thing. 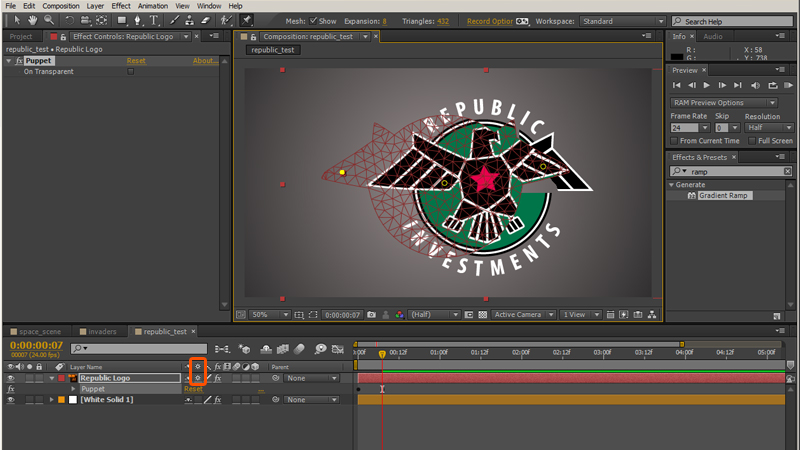 It's quite bizarre in appearance, but it makes perfect sense. The continuously rasterize being on by default is allowing After Effects to see that the deformation mesh of the puppet tool is actually transforming independently of the layer so that's the result you get. The same is true if you want to deform a vector layer with the puppet pin tool and you turn on continuously rasterize. A workaround for this is to precompose your vector layer or shape layer and then you can transform the nested composition as you would the layer. However, do not turn on collapse transformations for the nested composition or you will be right back where you started.

It's More than Pinning and Moving

There are some aspects of the puppet tools that just get overlooked, the first is the distortion mesh. Just by changing the expansion of the mesh and how many triangles make it up, you can completely change the behavior of your deformations. You should certainly experiment with these settings to learn what works for your project. Next, the puppet starch tool and the puppet overlap tool just sit in the shadows waiting for you to click and hold the puppet pin tool to discover them. They play a huge part in making sure your deformations look right. For example, if you don't want certain areas of your mesh to deform you can add rigidity with the puppet starch tool. What's fantastic about this tool is that you have settings for the amount and extent of the starch. You can get a wide spectrum of results just by changing these settings. You can also move the starch pin around the mesh. It isn't locked into position like the puppet pin is. And last, the puppet overlap tool is a little more straightforward, but once you understand that you can designate hierarchy of your mesh and even animate the overlap order, then you will not get frustrated when things don't look how you want them.

How Far Do You Want to Take This?

The puppet tools are great by themselves, but when teamed up with other tools and methods you can get some really stunning results. Using motion sketching with your puppet pins can give you some really organic movements that would take a long time to get by just manually keyframing pin positions. By holding Ctrl and moving the pin your movements are recorded in real time, this is crazy awesome. You can also adjust the rate at which your movements are recorded. Another great team up for the puppet tools is the use of expressions. You may not be a whiz at writing expressions, but taking the time to learn a few will be worth it. Parenting is also great to use with the puppet tools. You can parent the movements of one pin to another which is very useful when creating a walking cycle or movements for arms. Lastly, using scripts and plugins with your puppet tool can create some incredible results. One that deserves mention here was created by Greg Gunn and involves Inverse Kinematics. The results are really beautiful and would be a beast to accomplish without it. So, don't get intimidated or under whelmed by the puppet tools. Once you get in there and make your first animation, you'll wonder why this isn't the first tool in the toolbar. To learn more about this powerful tool, check out Getting Started with the Puppet Tool in After Effects