Tools and Techniques for Creating Better Motion Graphics in After Effects

Motion graphics is a complex and unique art form which takes a lot of dedication and skill to master. Mixing graphic design with animation to create appealing videos that communicate something to the viewer is no easy task. Whether you're just starting out or have motion design experience you probably know After Effects (AE) is the staple program for creating great motion graphics. This article will teach you some great tools and techniques you can be using inside of After Effects to help you create even better work.

While working on a motion graphics project, you'll inevitably need to render out your sequence. This can often times be a very time consuming task which often amounts to no more than a waiting game. A great technique to use while working in After Effects is to trim your layers. While this may not seem important at first, trimming your layers can help you stay organized and even speed up render time. As you start creating your motion graphics piece inside of After Effects you'll be working with numerous layers which all play a vital role in your composition. However, each layer may not be important for your entire sequence. For instance, you may be working with a layer that is important for the first two seconds of your sequence, but after the two seconds it's no longer needed. But even then the layer in the timeline will be calculated for the entire duration of your project. This is why spending a little extra bit of time trimming each of your layers down will not only allow you to stay visually organized, by being able see exactly when one layer's effect ends and the next begins on the timeline, but it'll also shorten the render time for your sequence because it's less that the system has to calculate on any given frame. In the end, that's something any motion designer wants to do. 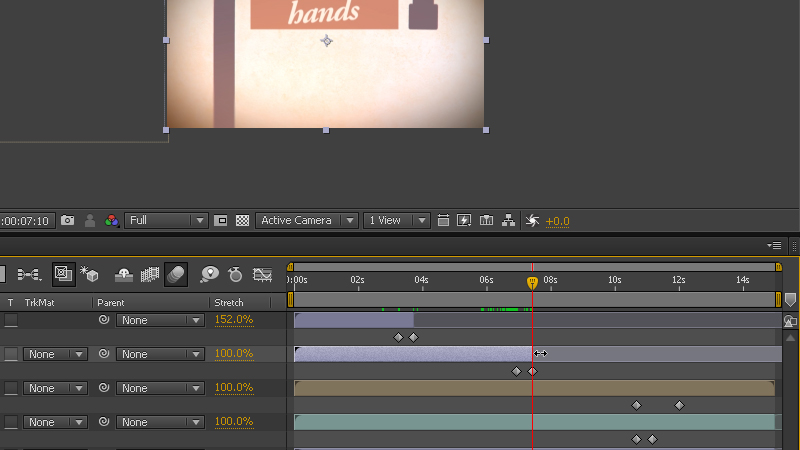 In order to trim your layers you'll simply need to find the last frame that the particular layer is needed. In many cases this is often the final keyframe, which you can find easily by using the shortcut U. Once you've found the frame you want to be the last for that layer, you can either drag the duration slider to the end of the keyframe or use the shortcut Alt + ] to trims the layer to needed.

An animated path is something seen a lot in motion graphics. It can be done relatively quickly, and it's an appealing effect. Often times it's used to create the effect that something is being drawn directly onto the video in real-time. There are many ways to achieve this type of effect inside of After Effects. One of the ways you could do it is by setting keyframes for each point on the path. While this would work, it would take a long time, and would be hard to get the right results. Instead, you can utilize one of the many animation presets in After Effects to create a great looking animated path in a much shorter amount of time. This would really only require two keyframes for the start and end to create the effect. 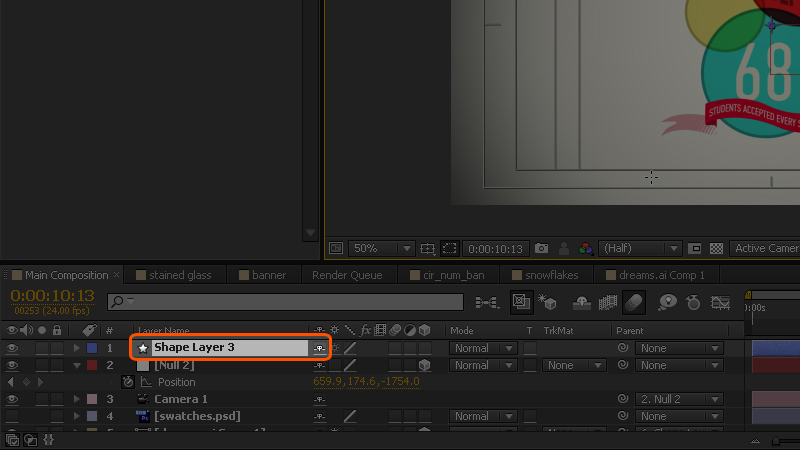 You can do this very easily in After Effects by first creating a new Shape Layer in your composition. Once you've created a new Shape Layer you can go to your pen tool and start creating the path you want. In this case it's a graph which'll be drawn on the video. 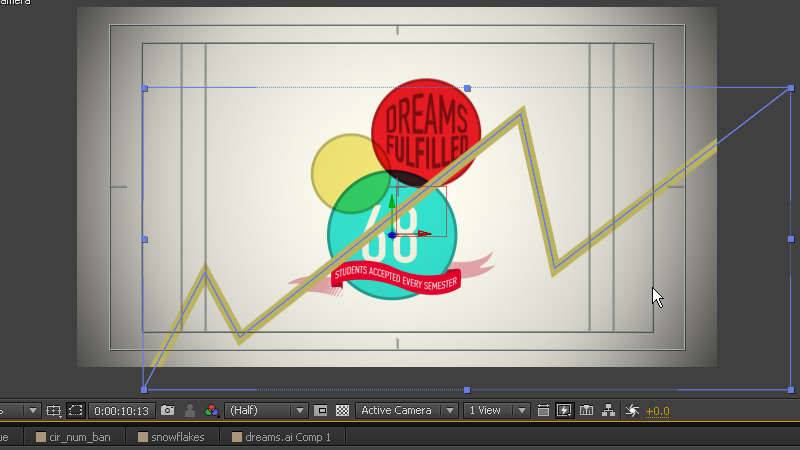 When you have your shape looking how you want you can convert the Shape Layer you created into a 3D layer. You'll probably notice your graphic has shrunk quite a bit, so you'll just need to scale it back up to get it to the right size. 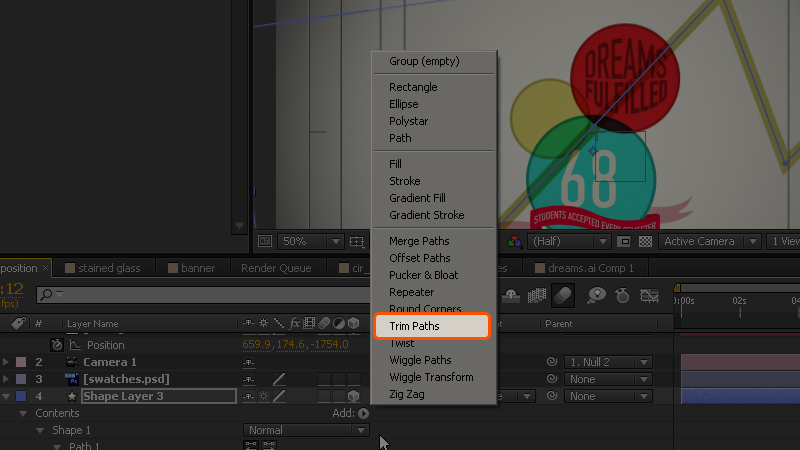 With your Shape Layer selected go to the fly out menu under the Add option, and choose Trim Paths as you can see in the screenshot above. 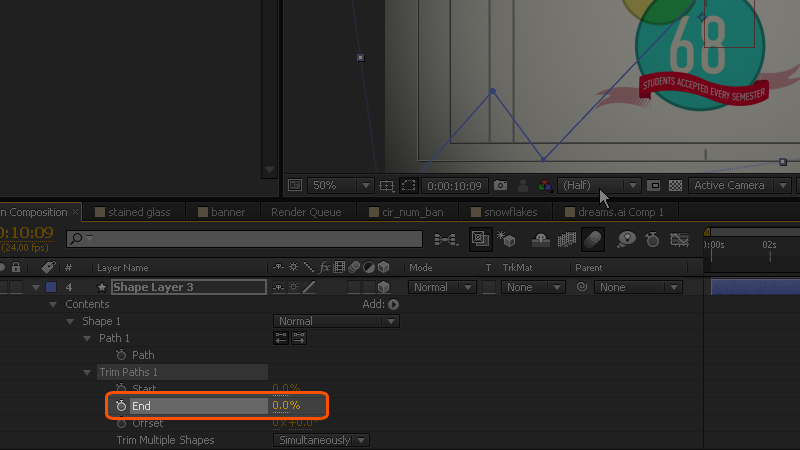 Now you'll need to go to where you want your animation to begin and set the End attribute of your new Trim Paths effect to 0% and set a keyframe. You'll notice your path is no longer visible. This is what you want. Next, go forward to where you want the animation to finish. Then set the Trim Paths End effect to 100%. After Effects should automatically set a keyframe here if you've set one in the previous step. That's it! Now you've the line you created look as if it's being drawn onto the video, and it only took two keyframes and just a few minutes to set up.

A common debate in the digital art world is whether you should use vectors or pixels. As you may already know, Photoshop creates pixel-based graphics, and Illustrator creates vector graphics. When you first start out working in AE you may feel more comfortable with one type over the other, simply because you might have used either Photoshop or Illustrator more in the past. However, it's important for you to remember there are benefits to both pixel-based and vector graphics, and there are certain instances where you'll want to use one over the other. For example, when creating gradients it's best to create them in Photoshop because there will be a lot less banding happening and you'll get much smoother results. With other graphic elements, vector should almost always be used over pixel graphics unless there's a specific need for pixel graphics. For instance, when working with animations where the camera comes really close to a graphic you'll notice that both the vector and pixel graphics will have bad aliasing issues and blurriness. However, this can be easily fixed with vector based graphics by setting the Continuously Rasterize option. With a pixel graphic you cannot fix this issue. It's important for you to know when to use one type over the other in your motion design work. Vector graphics are most likely the route you'll want to take, but there are some instances as mentioned above where pixel graphics will work better. Before jumping into a design, take the time to think about what aspects of the design will work best in vectors and what'll work best as pixel-based graphics.

When importing files from Illustrator into After Effects you may notice your colors don't look the same as they did in Illustrator. This happens because Illustrator defaults to the CMYK color mode, which is used for print, while After Effects uses the RGB color mode, which is best for video. To make sure you're getting the most out of your graphics and also to get an accurate representation of what your final piece will look like you'll need to switch your color mode to RGB in Illustrator whenever you're creating designs for motion graphics. This'll eliminate any of the coloring issues that you may have encountered in the past. 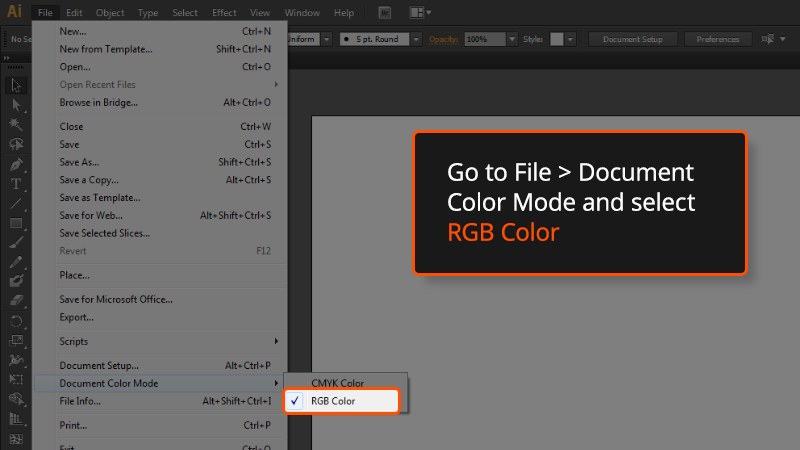 You can do this very easily in Illustrator by going to File > Document Color Mode > RGB Color as seen in the screenshot above. Whether you're creating the graphics yourself or someone else in the pipeline, when you're creating designs for motion graphics in Illustrator you'll get a better representation of the colors if you create those elements using the RGB color mode.

Check Your Keyframes in the Graph Editor

Like any other form of animation, motion graphics requires the use of keyframes to create movement. If you want to get the best possible results you should be utilizing the Graph Editor that's in After Effects. Since motion graphics is animation, many of the same animation principles can be applied to it. As you create the keyframes in the timeline you may be getting animation, but it will most likely be very linear and unappealing movements. You can use the Graph Editor to have gain more control over your animation and create much more realistic and interesting animations. The Graph Editor basically lets you see the interpolation happening between each keyframe. By fine-tuning the animation curves in the editor you can create things like ease in and ease out, follow through, and adjust the timing all fairly quickly.

Use the Puppet Tool

The Puppet Tool in After Effects is a very powerful tool letting you set points on a graphic that can be manipulated for animation. This is a great tool when you have a graphic element that resembles an animal or human. You can use the puppet tool to basically place all the joints on the graphic where the joints on a human would typically be, making it possible to manipulate those points individually of each other. 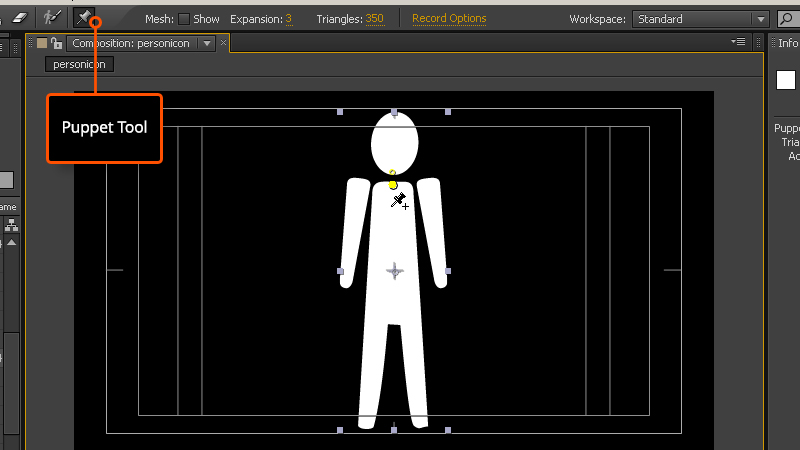 To start setting points you can go to your toolbar and select the Puppet Pin Tool. You can then start pinning your graphic in the places where the joints would be on a human, so the elbow, wrist, knee, etc. 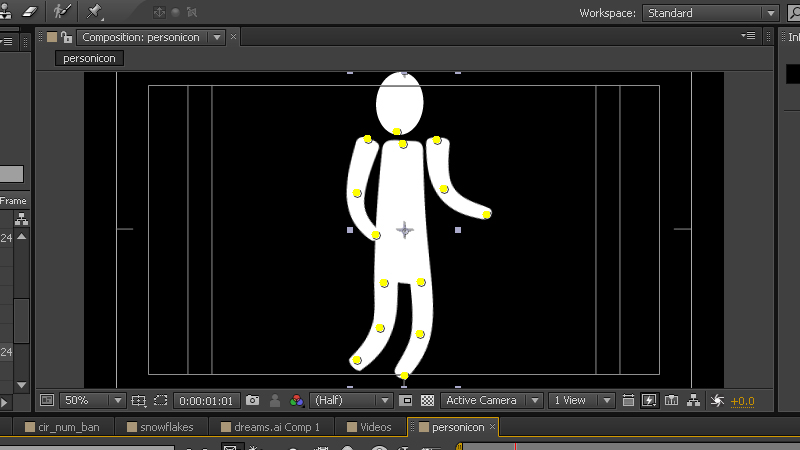 Once that is done you can start manipulating each pin point to get whatever pose you want. You can set keyframes like you normally would to create the animation. While the results may not be extremely realistic it's a great way to be able to move parts of your graphic around without having to separate different elements onto their own layer.   After Effects is an extremely robust application with many tools and features which are all vital in your motion graphics work. Make sure you're utilizing these tools and techniques to help you speed up your workflow and create even better work. This article has really just scratched the service on the types of tools available to you in After Effects, so make sure you check out the Introduction to After Effects for Motion Designers to learn even more tools and techniques, and continue learning with the many other After Effects motion graphics tutorials. If you've got and of your own tools or techniques that you'd like to share, feel free to add them to the comments below.