Continuing our series of discussions with Game Developer Members, we've decided to give a shout out to James Simpson, and his Goldfire Studio's newest project, CasinoRPG. The game is designed as a massively multiplayer online role playing game (MMORPG) similar to World of Warcraft; however, instead of battling a band of evil elves with your buddies, CasinoRPG's lets you work your way up from a lowly janitor within an enormous Vegas-style world, to being a mega tycoon who now owns your own casinos. Your rise to power involoves taking jobs, completing missions, running story lines and, of course, winning big at the casinos. All the while, you can play a variety of games on slots, poker, blackjack, and roulette wheels with friends and acquaintances then take those earnings and build new casinos to play in. You can also customize your casinos' layouts, locations, and featured games. CasinoRPG is open world, so there's plenty of room to build your empire. The game's concept seems very much like a Sims game meets online poker; however, the game's overall purpose is geared much more towards social events. 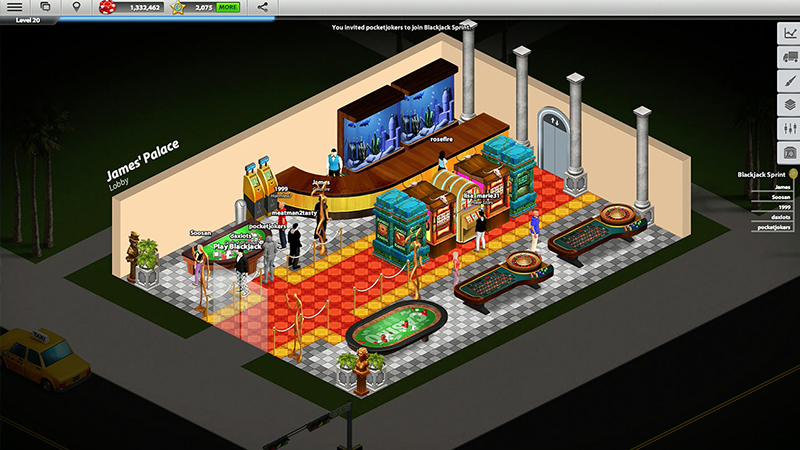 Also, CasinoRPG is a purely browser-based game developed for open web technologies such as HTML5 and can be played on anything with a modern browser. James explained how the game was developed. "We use a customized version of a game engine called Isogenic Game Engine," he states, "which is essentially just a Javascript library (no development environment). The only real software we use is Sublime Text 3 for coding, Photoshop for art and Google Chrome Dev Tools for testing and debugging. Our stack on the back-end is Node.js, MongoDB and Redis, hosted on a distributed cloud server setup with Joyent. Connections between players and the servers are purely with WebSockets." James is not only passionate about developing entertaining games, but he's also very optimistic about the social possibilities of gaming itself, especially on a global scale. Simpson sees in social gaming the potential to help connect the world in the same ways that innovations in communication and information sharing have done over the past two centuries. We at Digital-Tutors hope that this proves true and that James and the rest of the folks at Goldfire Studios continue to make some truly innovative social gaming experiences for the rest of us. Check out CasinoRPG trailer and let us know what you think about the game's potential. If you're interested in creating your own HTML5 game, be sure to check out James' course on Creating a Responsive Multiplayer Action Web Game in HTML5.