The Big Three of Character Animation

Character animation can be challenging. Your character might be required to move in a complex way, which is often accompanied with micro movements, e.g., subtle nuances that are added to convey realism. If not planned carefully, advanced animation can easily get out of control, which results in an excessive use of keyframes that eventually become unmanageable in the FCurve Editor, and a performance that is undesirable, to say the least. Thankfully, there are ways to prevent such issues, because if there weren't, all CG animators would be sad! Let's have a look at three helpful tips that can be used to manage and improve your character animations.

The Sound of Movement

The first tip is to use sound as a way of timing your character's movements. As of right now, you might be asking yourself, "Sound? What's he talking about?" Well, when acting out your animation (or when using reference) think about each movement as sound, then use this in your 3D software to match your character's movements to the sound that you've thought of from the reference. By doing so, you can begin to animate natural timing without having to rely on skipping through your reference frame-by-frame! This becomes even more useful when it's not possible, nor practical, to film reference. This technique can be utilized for all stages of the animation, e.g., from your blocking to your polishing passes. Let's have a look at a deeper example of how this technique can be put to use. If you're animating a super awesome jump-kick, and you're struggling with the timing of the animation, think about it in terms of sound. In your mind, imagine if that action produced a noise. What would that noise be? Once you've managed to figure that out, match your character's timing to the same audio. Continue to scrub your animation until your character's timing matches the noise you have thought of. As you start to implement this little trick, you should start noticing significant improvements in your Timing and Spacing, and that's something to sing about. In order to be most effective with this technique, start with your blocking pass and with your keyframe tangency set to stepped. That way you can focus on each major pose and how each pose is roughly timed before moving to the next stage (which is often another blocking pass). Think about it like a layered approach: start with a good foundation (blocking), then build onto the animation until you've added beautiful details to your structure (polishing).

Another helpful tip would be to hide certain parts of your character to mitigate distractions when working on advanced performances. This technique is typically most helpful after your blocking pass, when you're ready to polish your work. Usually it's required to have a feature on your character's control rig that allows the animator to hide sections of the rig. If, by chance, the rig you're animating with doesn't have this type of feature, you might want to request it because it can actually help you save time. Here's an example of how this can be implemented. Let's say your character needs to carry out a dynamic, acrobat-like flip before landing. After you've managed to rough in your timing and your extremes, and you feel confident enough to start on your polishing pass, try isolating the character's head and torso by hiding its limbs. Now, you're only focused on getting the torso to look top-notch without the distraction of the character's leg hitting its face. After you have finished your work on the torso, this would be a good moment to bring the legs back to correct their timing according to the changes made to the torso during its polishing pass. Once the legs have been polished, you can wrap up your work by polishing the arms. This kind of layered approach can truly help to simplify challenging character animations. You might also find this to be a more enjoyable approach to your polishing pass, since you'll hardly have any distractions, it will enable you to focus on implementing the Principles of Animation to add appeal to your work!

This last tip is about animating to the shot camera. In 3D animation, it's vital that all views are checked to make sure the animated character keeps its balance throughout the performance. However, when it gets down to the get-down, the most important view is the shot camera since it's the lens that the audience will view your awesome animations through. There are some moments when a pose that is corrected from your shot camera might look pretty atrocious from other views, but that doesn't matter because, at the end of the day, you should only be concerned with what audience members will see. At the same time, be careful. Yes, you should keep the shot camera in mind, first and foremost. However, you should still check to make sure your character's movements look swell from multiple views as much as they possibly can. The reason being, if you only animate from your shot camera, while not considering how the animation holds up from other angles, you might find that the character looks off-balance and moves awkwardly due to its poses being severely off in other views. Here's how a problem like this can be avoided: First, make sure your shot camera has been finalized before animating anything. The last thing you want to do is animate from the wrong angle, only to realize that most, if not all of the hard work you put in turned out to be a waste of time. That's how tables get flipped. Secondly, animate your character considering all views, but check back now and then on the shot camera to make sure all of your gestures are decently framed. Finally, on your final go at polishing your work, focus primarily, at this point, on how your animation plays through the shot camera's view. Aim for achieving the strongest silhouettes possible without destroying the performance. By keeping these steps in mind, you can begin to work without the stress of worrying if the gestures you have posed will hold up against the most important eye in film, the shot camera. 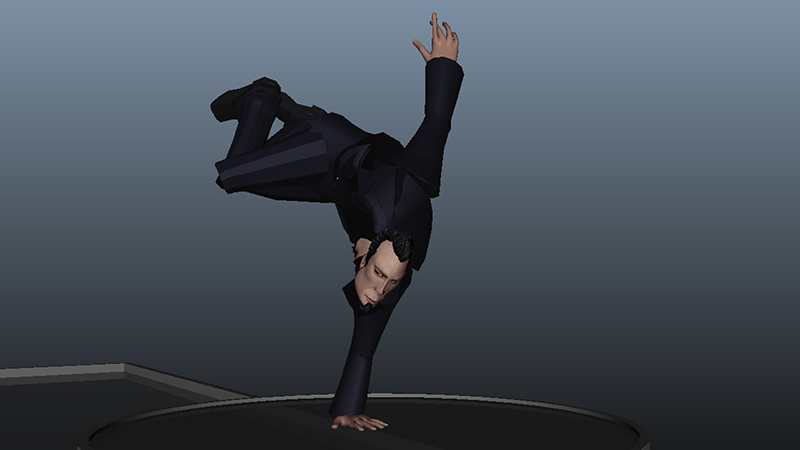 To conclude, you have learned, in this article, three useful tips for making the process of animating advanced performances manageable and achievable: use sound to figure out your timing, hide sections of the character to mitigate distractions, and animate to the shot camera. Implementing these tips can not only help you save time and improve the quality of your work, but they might also help you prevent headaches and table-flipping! And yes, this has been clinically proven...in my mind.