Graham Annable, co-director of The Boxtrolls, talked today at GDC about the making of the Laika's Academy Award nominated stop motion feature. Annable isn't a stranger to game development, however. He's work for 15 years in games industry animating for LucasArts and as creative director for TellTale Games. Later, Graham went to work at Laika studios doing storyboards for Coraline and ParaNorman. Annable explained that Laika began development of The Boxtrolls about 7 years ago when pre-production began trying to adapt Alan Snow's book Here Be Monsters. He began storyboarding on the project about 4 years ago when he was asked to board what would become one of the film's most important and emotional scenes: when the Boxtrolls find baby Eggs. However, Snow's illustration style within didn't provide a practical solution for adapting the story to stop motion animation. Laika soon brought on Nicolas de Crécy whose visual style was in keeping with the "wonky realism" of the European city inhabited by the Boxtrolls. "There's nobody better in the world at drawing piles of junk than Nicholas," Annable explained, "He was perfect for a film about cave-dwelling Boxtrolls." [caption id="attachment_41021" align="alignnone" width="800"] 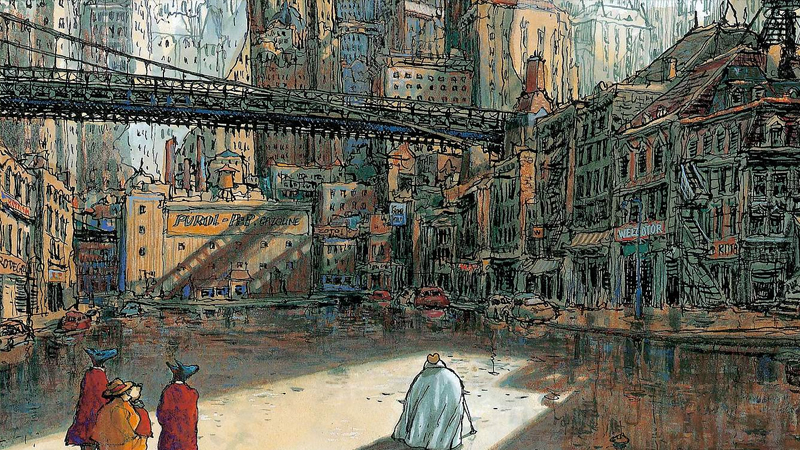 Drawing by Nicolas de Crécy[/caption] The next person that seem perfect to extrapolate from Nicolas de Crécy's drawings was French Canadian artist Michel Breton (The Triplets of Belleville). Breton was key in producing the shape language of the film. Annable explains: "Steep, stretched streets in old Europe, the feeling of being trapped in a rigged, tiered city, Perched high on a steep hill. Twisted streets and buildings. A city full of old traditions and new. The stuff that would set and sort of mirror the themes of class and prejudice in the story." [caption id="attachment_41024" align="alignnone" width="800"] 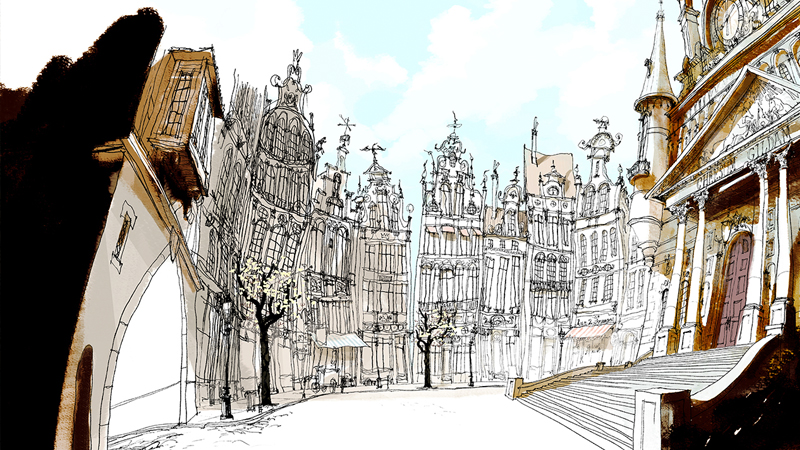 Michel Breton[/caption] After Breton's line work gave the desired shapes to The Boxtrolls design, production designer Paul Lasaine (Lord of the Rings) was brought in infuse the look with color. It was hard to avoid a dark look given the story's underground settings. But Lasaine pushed the film's color palette to give a warm feeling to the Boxtroll's underground home. 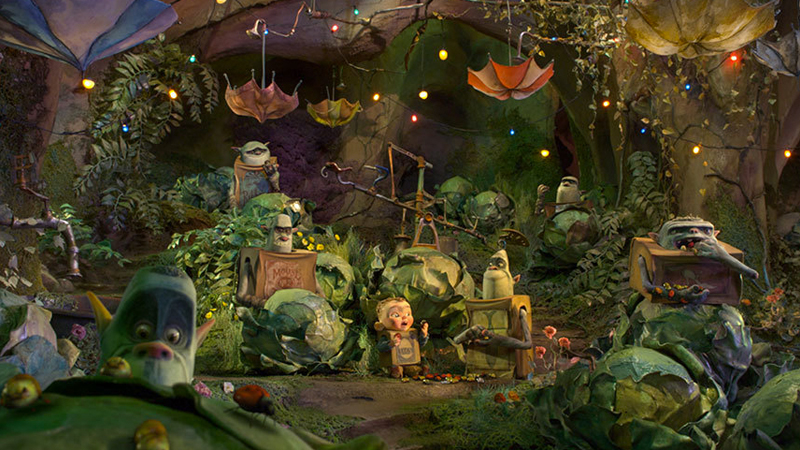 The final look of the film came together pretty quickly, which left the production in a unique situation. Annable explained that they have determined the world before they have designed their characters, which is opposite from a normal approach. This put the character designer Mike Smith into a tough situation. Smith ended up starting with silhouettes first and then layer on the designs and textures that would go with them. "This technique really allowed Mike to utilized the shape language that Michel had established with the buildings and put that into the characters. It felt right for these characters to be inhabiting the streets and buildings that Michel had created in our world," Annable recalls. 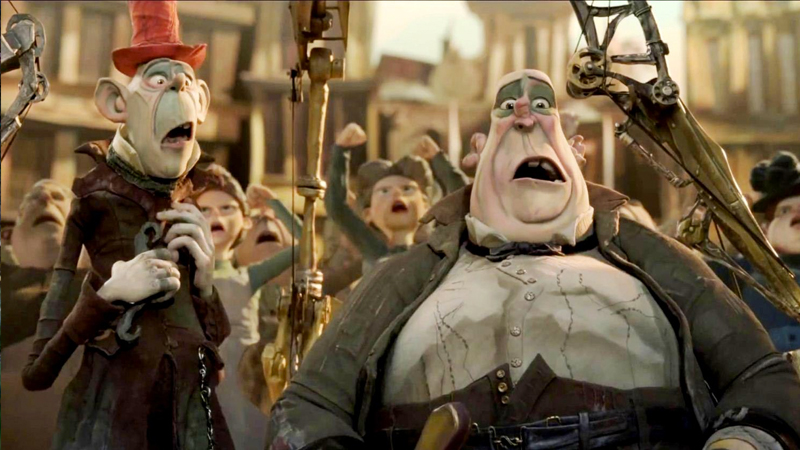 One thing Annable learned about the scale of the characters for a stop motion film was that the entire world is built around from main character. "Eggs, our main character, stands above 9 inches tall. When you create a stop motion feature, your main character's scale dictates how big the entire movie needs to be...Egg's 9 inch scale determined the smallest Boxtrolls to the biggest mech-a-drill machinery." In order to keep the scale of the characters hidden, the costume department used laser cutting machines on the material to keep the stitches small enough to maintain the illusion. 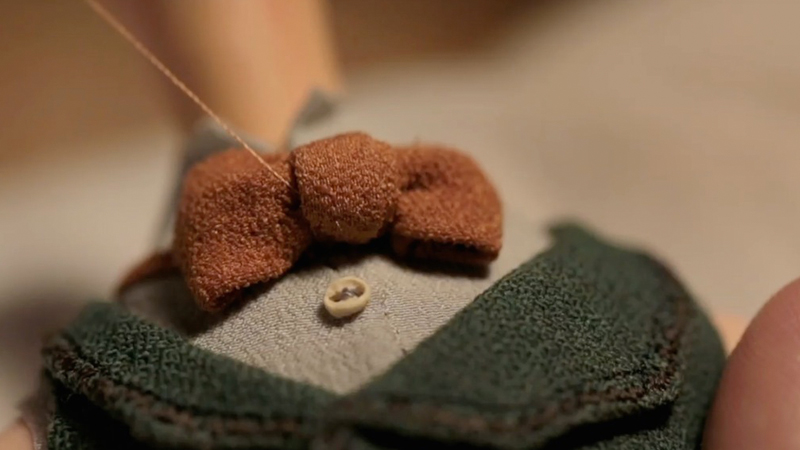 To create the Boxtroll's cardboard boxes, the design team actually began with cardboard, but soon realized that the material wasn't going to be strong enough to last the entire eighteen months of the shoot. So, they switched to a silicon-based material that resembled cardboard. Initially, Annable and co-director Anthony Stacchi wanted the Boxtroll's grunting and squeaky language to translate into a fairly intricate language. "We were super nerding out in the early days. We imagined that we'd be selling Boxtroll dictionaries after the movie came out." However, after hiring Dee Baker and Steve Bloom to do the voices for Fish and Shoe, it became apparent that their language was too complex. 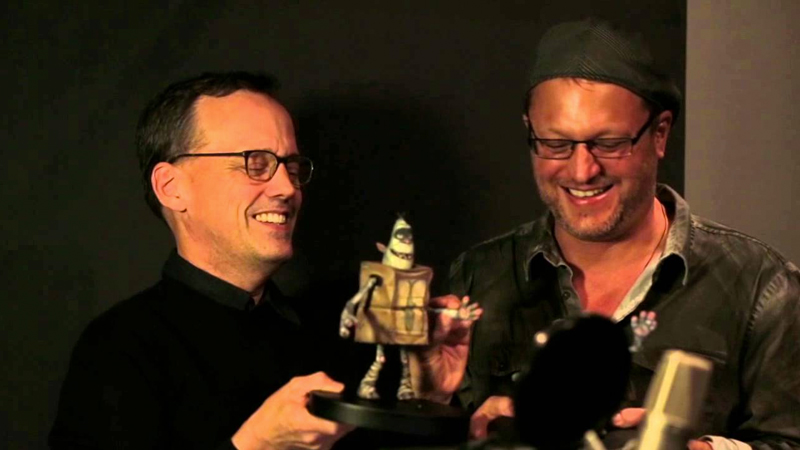 "They were instrumental in helping us work out a much more stripped back emotive soundscape for the Trolls. It was at a level where you could understand what they were getting at, but you weren't lost in a myriad of Klingon-esq words and odd phrases." To create the puppet's expression, producers used 3D printers. "Eggs had close to 15,000 face pieces created for the film, which gave him somewhere in the range of 1.4 million possible expressions," Annable explained. However, signing off on the final facial expression sequences, directors had to view play blasts before the puppets were actually animated. "The RP department essentially pastes digital versions of the faces they've created in Maya over top of the story reel so that everyone can agree upon the final faces that are going to be used on the set. Once we agree, they hit the print button on the 3D printer, and months later those faces will be used on the set." 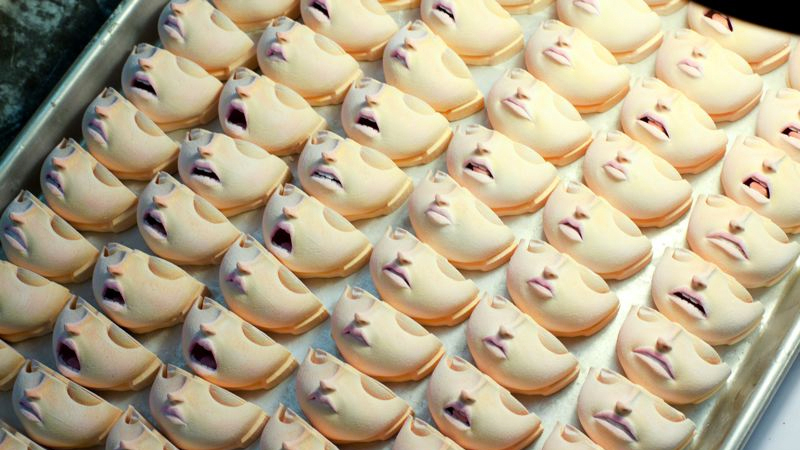 Despite all of the physical mechanics, 3D printers, and puppets, the producers utilized their VFX departments to help create fantastic worlds they were unable to produce other wise. "Neither Tony and I were purist with stop motion...the puppets are real, the sets are real, everything that the puppets touch or interact with is always real. But anywhere else we could help expand that world and create a fantastical landscape, we would always go to the VFX guys to help create it." "As insane as it is creating a stop motion film, there is no denying that it does hold a unique quality to the final look, a certain dream-like feeling that truly is special. Real objects and real light. I don't know what it is, but everybody gravitates to it. I think there's something in our DNA I guess as kids playing with dolls. You just can't get away from it. When you see these things physically in front of you, there's nothing quite like it. I do find that, in a world right now where there's so many CG animated films, it's kind of comical that Laika seems to offer something new by doing something so old."