Bringing the Hero to Life for the Indie Game Development Pipeline

The instructors at Digital-Tutors recently had the privilege of working on a game for educational purposes to highlight Maya LT and it's compatibility with game engines like Unity. It was designed to give indie game developers a chance to shine without having to spend a fortune to see their vision become a reality. This article will focus on the rigging and animation portion of the hero in this game, the Ghost Knight, as well as our hero's development stages as they relate to animation. 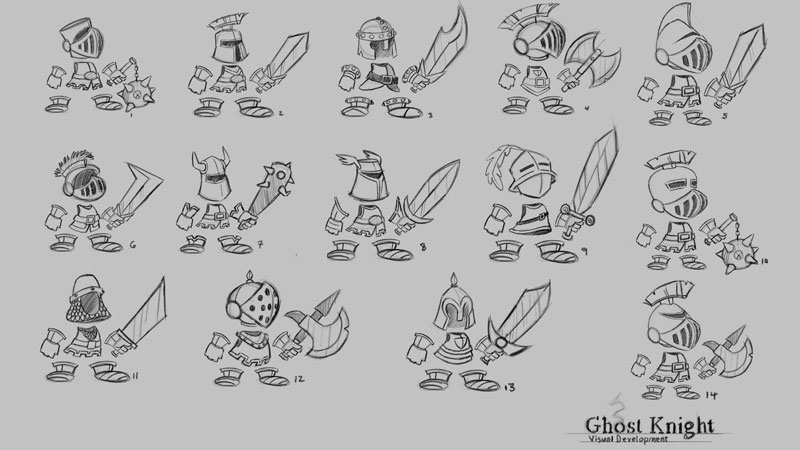 Before any character was rigged, animated, or even modeled, the visual development was done to get the look and feel of the project squared away. After a week of development, the team nailed down an idea we all felt would be very entertaining, and quite humorous. In the end, the Ghost Knight was realized as a phantom hero from the nether realm, summoned to save the day from the tyranny of the rock monster. Once we all came to an agreement on the design of the hero, Justin got to work modeling and texturing him. Afterwards, the character asset was handed off to be rigged and animated. 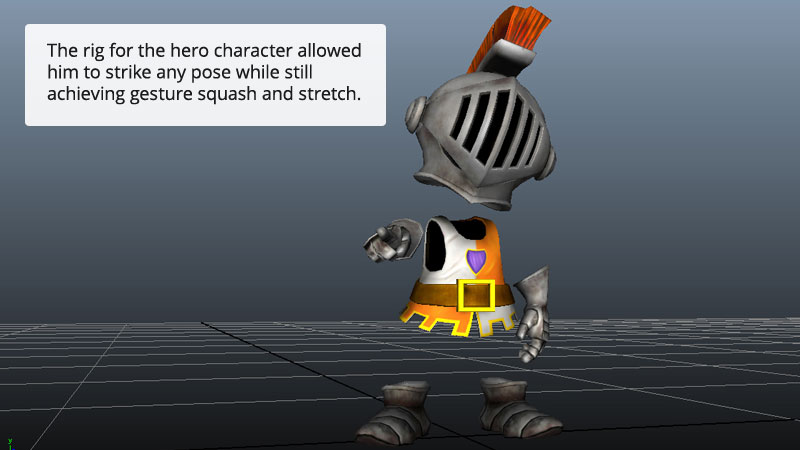 The hero of the game was designed to look as if he were an apparition inside of armor. All of his pieces (i.e., his helmet, gloves, torso, and, shoes) were built to reflect this concept. This idea gave a lot of liberty over how the hero would be rigged in order to create appealing animation cycles for the game. His underlining skeleton was built in the same way that you'd create any skeleton for a bipedal-type character. The controls for his torso and head were designed in such a way that he could be posed however you'd like while getting a nice squash and stretch on his rather ridged armor plates as he's animated. His limbs were connected with inverse kinematics (IK) to provide a sense of length, so the arms and legs were never pushed too far to stay true to the proportions of the model. Once the rig was finished, the hero was ready for animation.

A common keyword used throughout this project was "whimsical". This helped to keep our animation pipeline focused when creating performances for the Ghost Knight so every piece of art had a sense of consistency. Several animations were built specifically so players could have a fun time exploring the stage of the game that focused on the boss's environment. Here's a list of the core animations that were needed for the hero: Most of the animations had to be mirrored manually in order for us to have full control over how the character looked as he moved along the game's two-dimensional plane. After all animations were completed, the performances were baked to the model's skeleton and all controls and nodes foreign to Unity (i.e., constraints and IK systems) were removed from the file to prepare for a clean and seamless export to Unity. We took advantage of Maya LT's robust Send to Unity feature in this process. It proved to be very convenient for exporting these animated assets for use in Unity. Maya LT's FBX exporter also turned out to be a helpful alternative to the Send to Unity utility. In the end, it was important to make sure our hero performed in a way that felt magical and entertaining. When you're creating animations for your own indie game, it's always important to keep in mind that the success of your game is ultimately going to rely heavily on a team of artists getting together with one vision in mind: to create an appealing game that would help indie game developers figure out the steps needed to make the games they are passionate about. For a more in-depth look at the rigging and animation of the hero character, follow along with the Indie Game Development Pipeline Volume 6: Hero Character Rigging and Animation tutorial or check out the entire Indie Game Development Pipeline to learn  how Maya LT and Unity can be leveraged to accomplish your indie game development dreams.