Film commentator, Tony Zhou has published a video essay examining some interesting framing techniques within Akira Kurosawa's The Bad Sleep Well. Zhou's thesis is that filmmakers today could learn a lot from Kurosawa's use of "geometric" framing to create dramatic tension within dialogue scenes. The type of tension Zhou discusses usually occurs within a scene that goes beyond the standard shot-reverse shot coverage between two people. Instead his advice is most applicable for scenes with three characters or more. The video below, along with Zhou's explanation, gives you some good strategies for creating variety, depth, interest, and tension within your own scenes. To continue the discussion, I've also provided an analysis for one of the scenes that further illustrate how these geometric framing techniques function to direct the audience's attention.

Zhou correctly points out Kurosawa's use of geometric lines and framing in depth. He contrasts this technique with recent Hollywood films (The Imitation Game and The Theory of Everything) that use a much flatter, less interesting approach. As you can see in this image, Kurosawa carefully framed the two characters at this tense moment so that viewers' attention would shift back and forth from Nishi (sitting), Shirai to the bag containing the money. 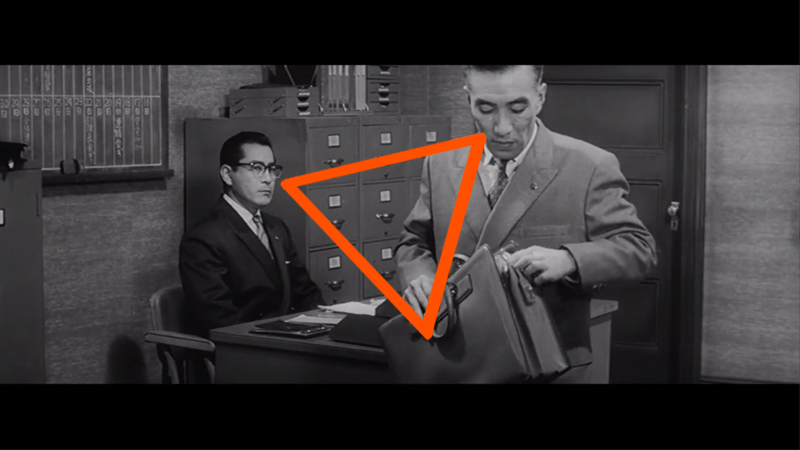 In this scene we see Nishi secretly put the money in the bag and give it to Shirai. When the camera moves over to follow Nishi, our attention is focused strongly on his gaze. We are just as interested in his reaction as we are to Shirai as he's discovering the money. Our focus moves from these three points as we try and take in all of the narrative information. It's this shifting of our attention that helps create dramatic tension. Providing an audience with multiple, equally important areas within the frame to focus on can heighten their attention level and curiosity. Notice also that the resulting triangle is equilateral. This provides predictable, easily follow paths for scanning the action. The image also places both men's faces onto the intersecting lines of the rule of thirds: 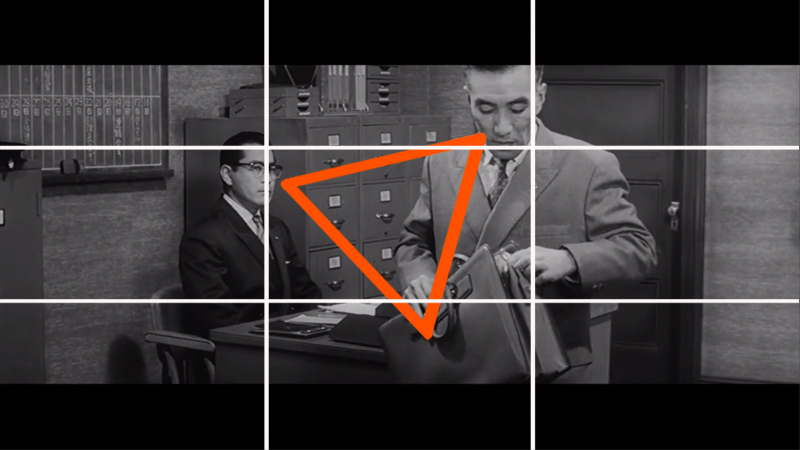 Thus, this shot from The Big Sleep Well is both visually complex, having multiple focal points, yet it's easily understandable by the viewer. It should also be noted that requiring too many points of attention can cause confusion and annoyance for a viewer. However, Kurosawa seems to have gotten it just right in this scene. Today the approach to this shot would probably involve mostly editing. That is, we might be shown a closeup of Shirai opening the bag, then a cut to Nishi's reaction as he glances sideways, then finally back to either a closeup of Shirai or the same two-shot. One might argue that these cuts would also heighten the audience's attention in the same way by switching from one character to the next. In this case, we would need to understand each character's actions and reactions between the cuts. However, one important difference exists between the two options: the amount of control used in directing the audience's attention. A cut to a closeup gives the viewer very little choice of what to look at. We really have little choice but to look at the one character, as in the image below from The Theory of Everything. 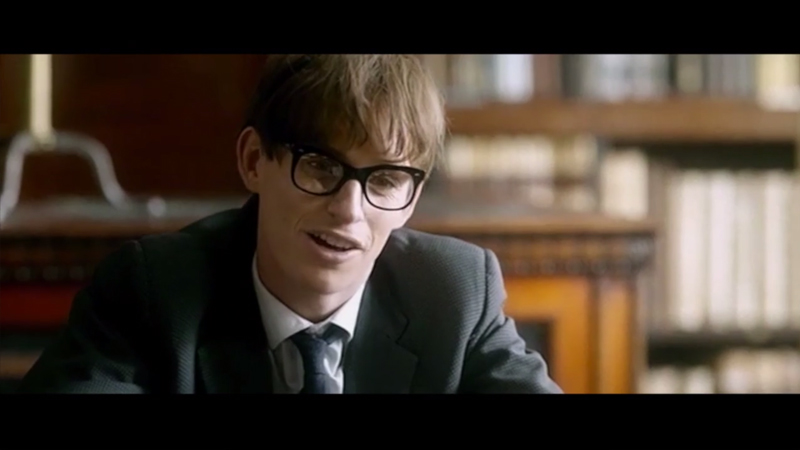 Of course this is perfectly acceptable when you want the focus placed on one character. But while audiences like direction, they also enjoy doing some of the visual interpretation themselves. Viewers like Zhou might find themselves feeling bored with these scenes for this reason. Kurosawa's style, while also carefully directing our attention, is much more subtle. It's a nudge rather than a push.

One reason why these types of tableau compositions are no longer utilized today is that films are increasingly using shorter focal lengths. The cinematographic technique is presumably used to make the characters "pop" off the screen, in contrast to blurred backgrounds they set against. In The Bad Sleep Well, Kurosawa used a longer focal length to keep more of the scene in focus. This is a technique used to the same effect within American films as well, such as Citizen Kane. 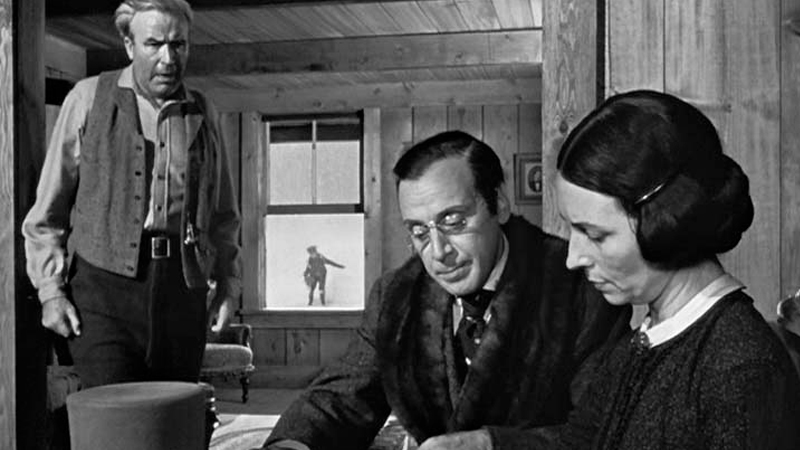 Maintaining a short focal length doesn't give you much opportunity to compose in depth. For example take this shot Zhou provides in the video from The Imitation Game: 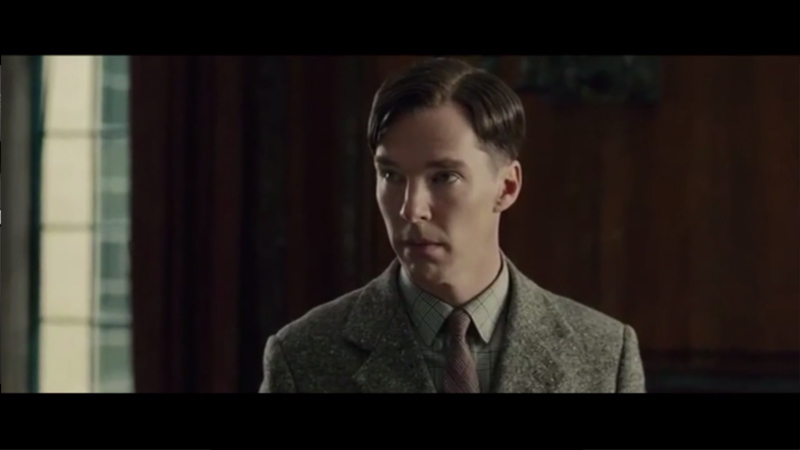 If we apply a similar blurriness to the background of Kurosawa's shot, it's easy to see how it prompts a change in the way we read the image. When compared with the original, this altered version insists that we focus our attention on Shirai opening the bag despite our desire to see Nish's reaction in the background. 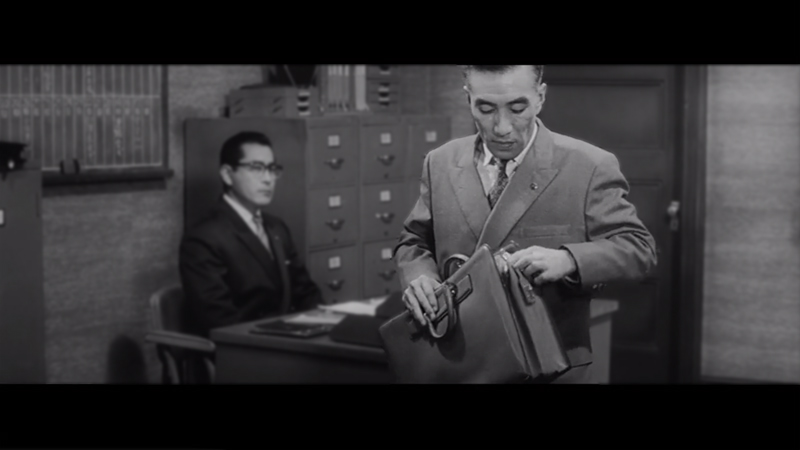