If you've ever animated a character or creature and have noticed a significant loss of volume as the rig deforms, it simply means that the rig, by itself, is not capable of producing such complex shapes. Fortunately, this  can be resolved with a Corrective Target. In this article, you'll learn the steps for designing and implementing Corrective Targets.

So, what exactly IS a Corrective Target? It's simply a model that you would like another model to morph into. The model that influences these morphing deformations is known as the Target model. Though the Target model is typically used for facial animation, it also serves as a great corrective solution for deformations you aren't so fond of.  For example, if you notice that your model loses a lot of volume in the wrists when posed, this would be an excellent opportunity to fix these issues with Corrective Targets.

Now that you're familiar with what a Corrective Target is, let's learn how to implement this corrective workflow. First, after weight-painting has been completed, pose your model and search for any remaining deformations that are undesirable. Make sure these areas can't be fixed by merely spending more time in the weight-painting process.

It's vital that the Target is cloned from the Base model's neutral position to ensure that only modified vertices on the Target will appear on the Base model. If this isn't done, you run the risk of throwing off the vertex position of all vertices across the entire skinned model as you trigger the Target model. Once the Target is made, you can then assign it as such using the mesh-morphing deformer of your software, i.e., the Blend Shape deformer, Morpher Modifier, etc, and then translate it next to your base model so that it's easy to see updates on your base model as the Target is tweaked.

You're now ready to jump to the frame that holds the pose with deformations require polish. Once there, it's time to begin sculpting the Target until the deformations on the Base mesh are desirable. 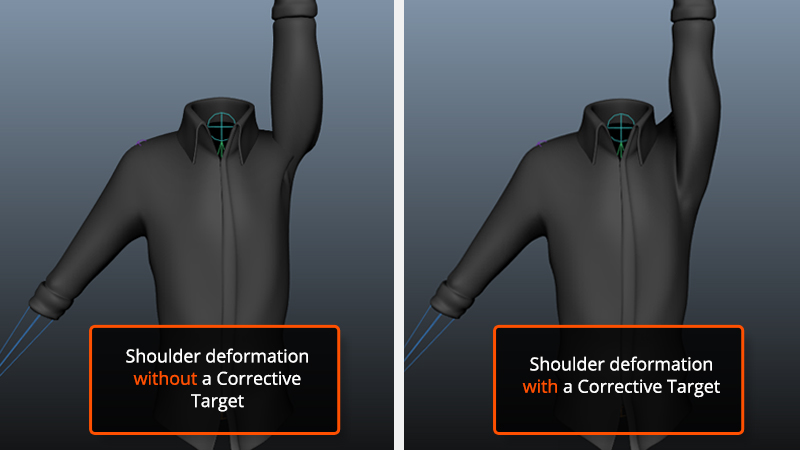 At this point, you've managed to achieve the deformations you'd like to see on your base mesh, all with the help of your Target mesh, however, you're not quite finished yet. The next step is to figure out the most practical way for the Target to trigger once you reach the pose that it was created to fix. This can be done a number of ways:

Option 2, is more ideal since it can help save you a lot of time and repetition. However, its implementation can be more challenging than one might expect. You could connect the Target's triggering to the rotation of the joint responsible for producing the problematic shape. However, a joint's orientation tends to flip due to Gimbal Lock, when the joint is rotated to an extreme that would cause such a problem to ensue.

Thankfully, there are other solutions that are far more robust, one of them being the use of cone readers that track a joint's angle and uses that angular data to activate the Corrective Target at the right moment! Learn more about cone readers from our article, The Rise of Cone Readers - Helpful Production Tips for Rigs.