For the second volume of our mastering VFX terminology series, we will be discussing the ins and outs of rotoscoping. Rotoscoping is one of the essential tools in a VFX compositor's toolbox. It's grunt work, but everyone has to do it when they're first starting out. There's also a right way and a very wrong way to do it. Learn some of the best time-saving practices, and prevent a lot of headaches and reworks.

Is there a right way to draw a rotoscope?

Often when you're first drawing a rotoscope you'll start by outlining the entire shape with one big rotoscope. This is a common rookie mistake. The reason this is wrong is because later when it comes time to animate that rotoscope it will be much harder to create keyframes that accurately move a rotoscope that encompasses an entire image. Instead, consider breaking the rotoscope into several smaller overlapping parts. This may seem like more work at first, but the drawing process is much less time consuming than the animation process. The animation process can be sped up considerably when joints of moving parts are taken into consideration. Consider a person waving their hand. Instead of creating one big mask that encompasses the whole body, create a mask for the fingers, the palm, the forearm, the upper arm, the shoulder and all the body parts that are defined by natural joints. This might take more time to draw initially, but once things get moving it's much faster because you can focus on moving the whole rotoscope rather than individual points within it. 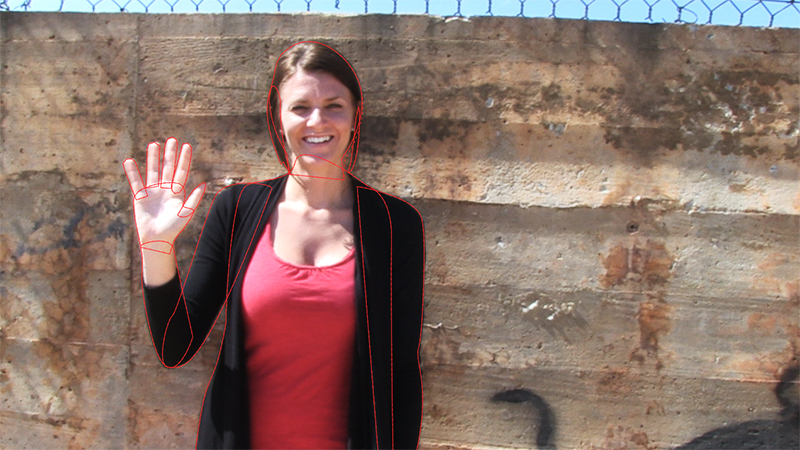 What's the best way to make a rotoscope move with an image?

You might be tempted to go ahead and start moving the rotoscope or scopes around and going through them frame by frame. This will take a very long time and have more of a chance of being inaccurate because of the tremendous amount of keyframes this technique generates. Instead, watch the footage through several times and establish the most prominent points of change in the motion of the object. Then set keyframes for your rotoscope on these keyframes. Now, begin scrubbing between those keys and finding the areas where the rotoscope is not matching the outline of the object. If you find yourself having to do a lot of point level animation on the rotoscope, you probably did not break the roto down into small enough parts. You should be able to reposition and rotate the rotoscope with minimal changes to the shape of its outline. Setting those intermediate keyframes is the longest part of the rotoscoping process. Do your best to set as few keyframes as possible so that you can save yourself the most time and have the least chance of a jittery looking matte.

Using a track with a rotoscope

If you find you have a lot of complex movement that you have to match with your rotoscope keyframing, consider tracking some of the features and using the tracking data to animate your rotoscope. Different software have different ways of actually executing this but the concept is still the same across the board. Track the position and rotation of an object and then apply the tracking data to the position and rotation of the rotoscope. Some software won't allow you to directly tie tracking information to the rotoscope so you may have to create a rotoscope that's not being applied directly to your footage but first to a solid that will act as a matte. These types of footage can receive tracking data and also can be reused later if output as a sequence. The rotoscope as an alpha, or if you drew your rotoscope on solids to begin with, you could just make sure you are using pure black and white colors for the final output to work as a luma matte. Rotoscoping can be relaxing for some people or mind-numbing drudgery others, but doing your rotoscope the right way the first time is a good way to ensure that you'll eventually move up in the VFX pipeline. Are you one of the people out there who likes rotoscoping or do you hate it with a passion? Tell us about it in the comments below!