I've finally made it to the end of the Maya Journal! I have to say it's been personally satisfying to complete the modeling section in our Introduction to Maya 2015 tutorials. It comes just in time too because we've just launch our Intro to Maya 2016. In this last installment, I'll finish up with the mech by modeling the bottom half of its body, the legs and feet. We'll be using all of the techniques I've demonstrated in the past episodes of the tutorial and apply them to the modeling of these lower appendages.

Before beginning to model a leg for the mech, we need to build a structure for attaching them. It needs to serve as a base for articulation, similar to the way our hips function for our own legs. For this base, we'll use a simple polygon sphere. Below I've given you a perspective view of the back and side of the mech's torso to give you some idea of the size and placement of the sphere. 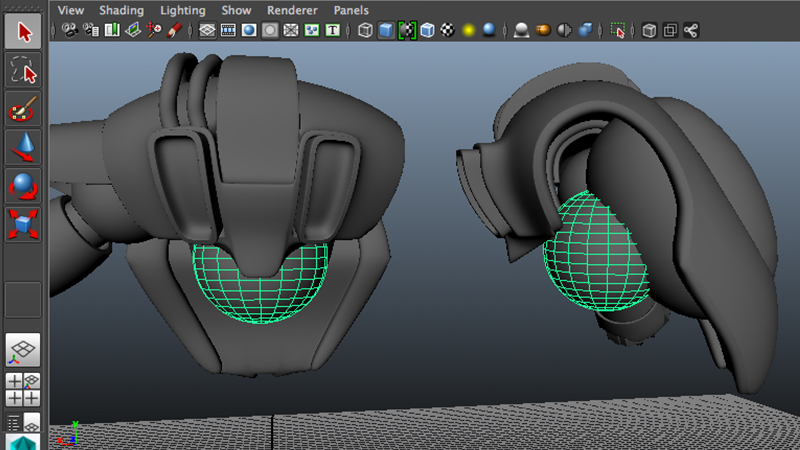 For aesthetic reasons, you may also want to include an undercarriage to the torso that hides the various parts and gives the body some volume. We can do this by first creating a cube and locating it near the sphere we just created. Next, we'll want to add 3 subdivisions within the depth so that we can alter its shape easily. Below is a side view of my cube's shape and location. 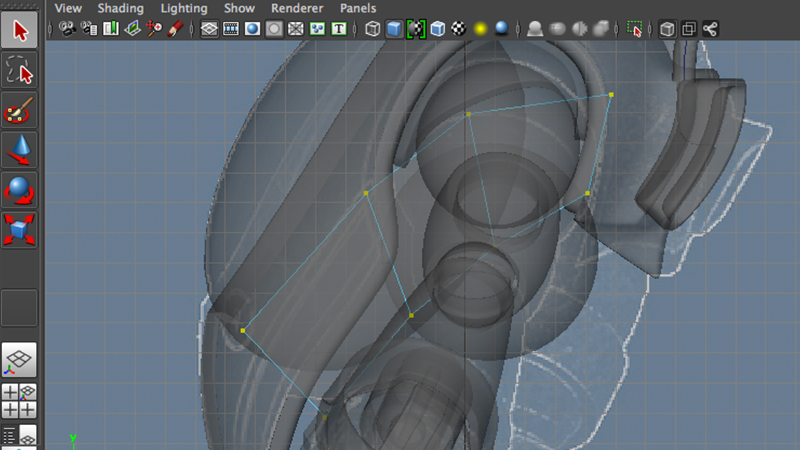 You may want to insert some edge loops around the cube's edges so that it maintains a cube-like shape. The cube's shape and size doesn't need to be perfect right now because we'll probably be re-sizing it later. Here is the smoothed version of mine: 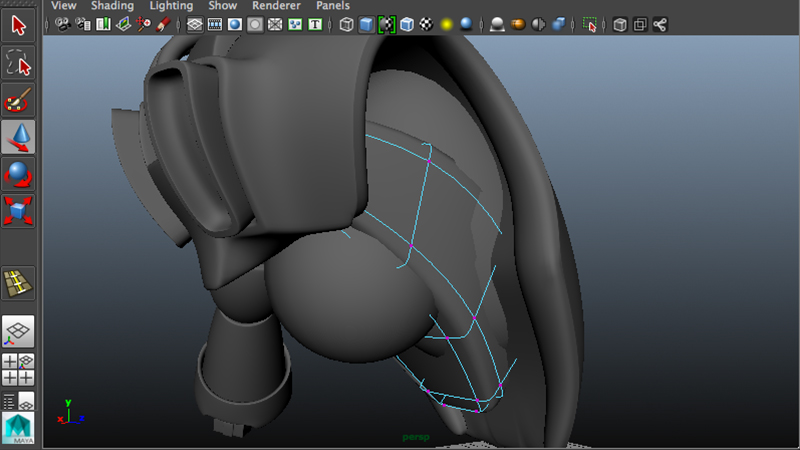 We're now ready to build a hip joint socket that's attached to our sphere. This is what our upper leg joint socket will sit in later. Build the socket out of a cylinder and place/rotate it where the mech's upper leg will attach. Again, just make a rough estimate of its size and placement. You can always adjust it later. 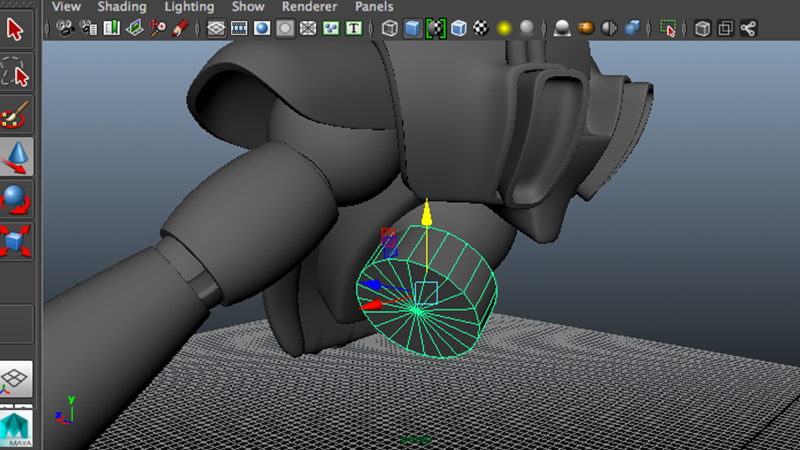 Next, select the front vertices on the outside of the hip socket and slightly taper it. Then extrude the outside faces inwards to form a lip and push back to create a recess (i.e. socket) where the leg joint will sit. Finally, use the orthogonal side view to align the socket with the angle of the leg. You'll also want to add some edge loops to the socket's circumference so that its edges stay sharp. 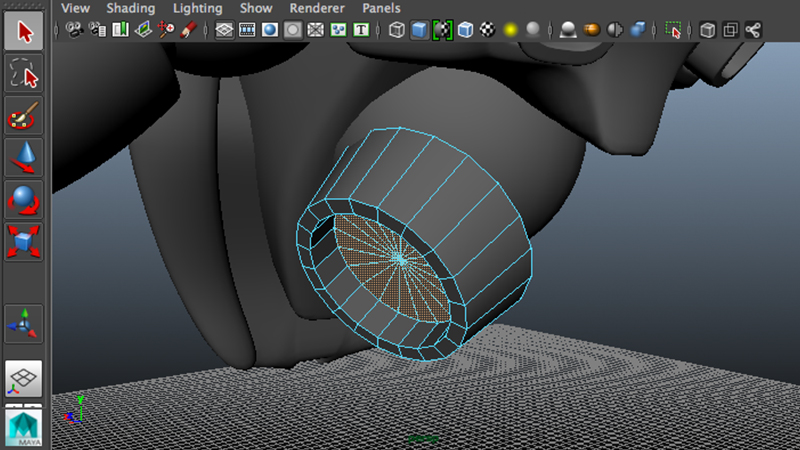 Instead of making another hip socket for the opposite side (i.e. right side), you can duplicate this one and change its position in the Channel Box. Doing this is fairly easy with the following steps: This should place the duplicate socket exactly opposite the original. You should also freeze your transformations, which will reset your -1 back to 1. Knowing how to duplicate objects in this way can really help in keeping your models symmetrical. Plus, it's just easier than building another object from scratch. 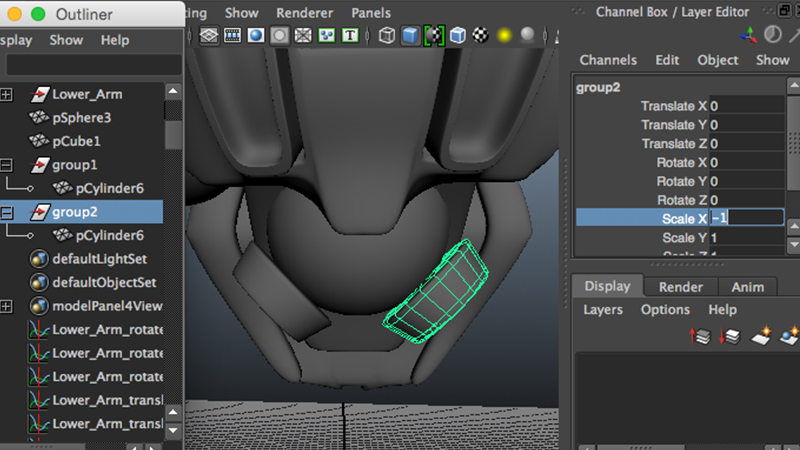 You can also use this same grouping and duplication procedure to copy and move another set of hoses to the opposite side of the mech's shoulders. We’ll be using this procedure throughout this article, especially at the end when we're finishing up the mech. Here is what my mech looks like with duplicated hip sockets and hoses. 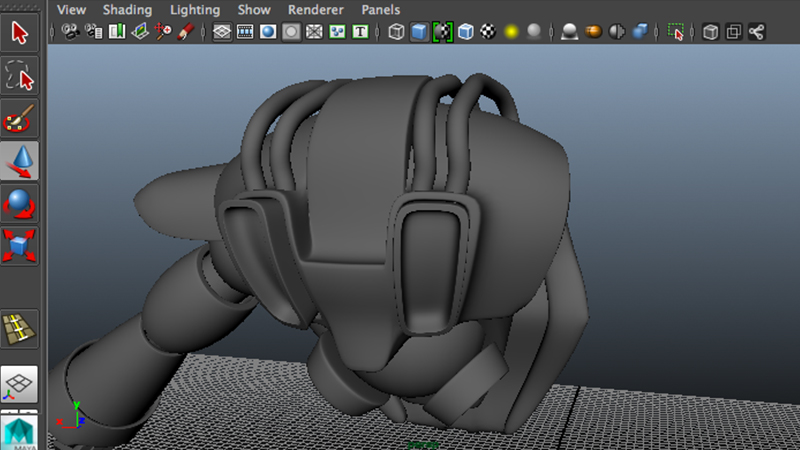 Instead of starting from scratch to build the upper leg, we can use existing geometry we've already created in the upper arm. This is another time saving procedure: In the image below, you'll notice I've labeled each group Upper_Arm_Right and Upper_Leg_Right in the Outliner. This is to avoid confusion later on. It's important that we begin to organize all of these various pieces into groups for this purpose. The reason for this will become clearer as we begin finishing up. 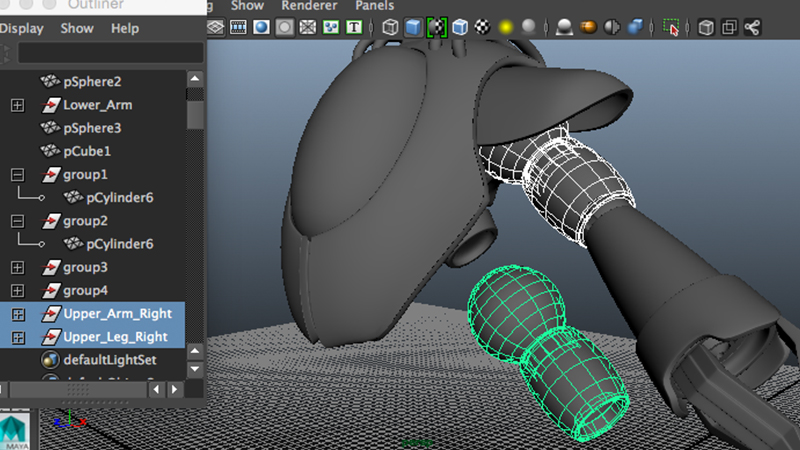 Position each lower leg shape separately. First the sphere and then the cylinder. Make sure the sphere (i.e. ball socket) is seated nicely into the hip socket. After positioning the cylinder over the ball socket, you may need to adjust some of the vertices at the top of the cylinder so they don't intersect with or pinch the hip socket as the leg is articulated backwards and forwards during animation. 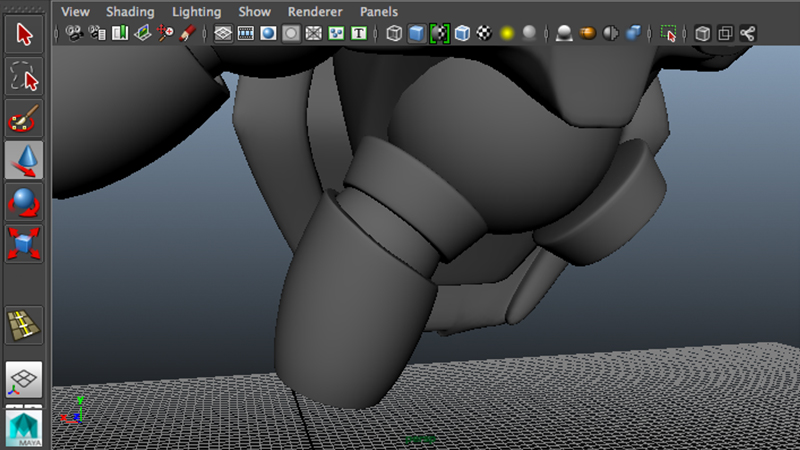 To build the lower leg, we’ll again use existing elements, this time from the lower arm: 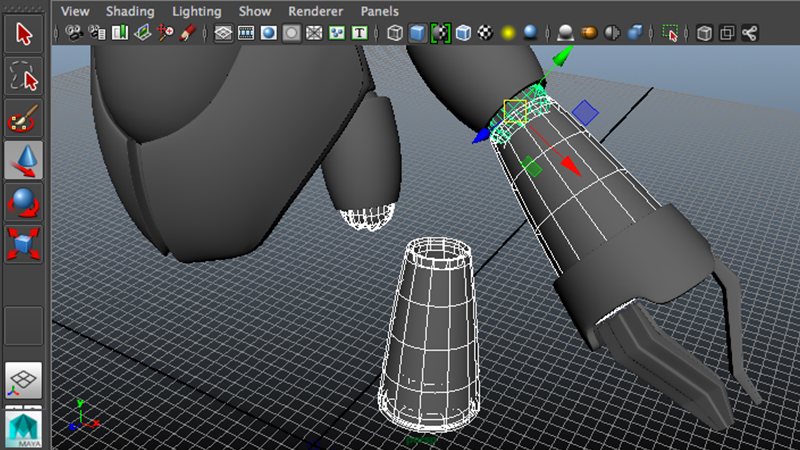 The lower leg section has a slight bend to it, so use the side orthogonal view to shape the lower sections of the leg. Just don't extend the lower portion all the way to the ground since we’ll be extruding part of it downwards in the next step. 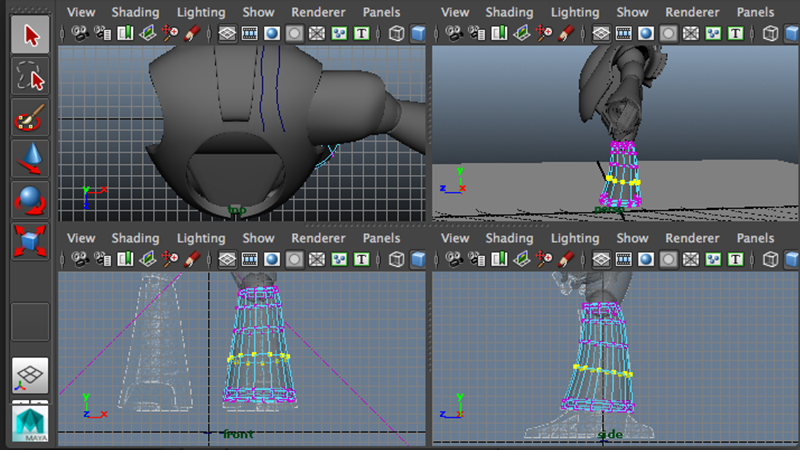 To form a recess for the feet to sit in, select three bottom faces of the inside and outside of the leg and extrude downwards. These two side pieces can now extend almost to the floor. 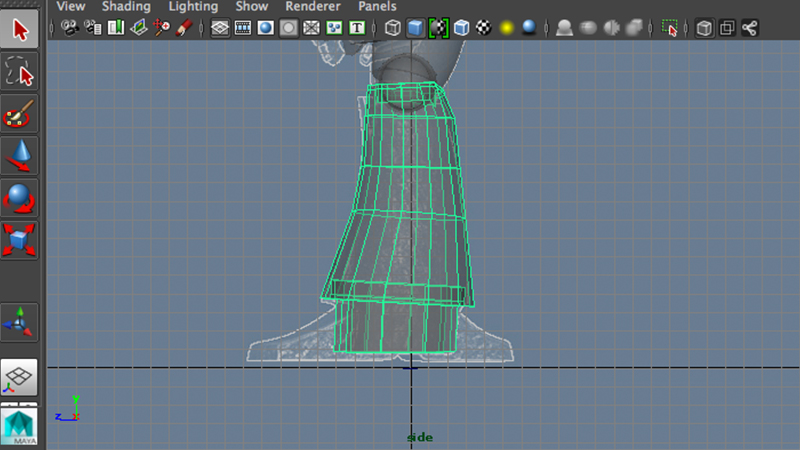 We can create some detail on the leg's front shin by selecting the center row of front faces and extruding them outwards slightly. 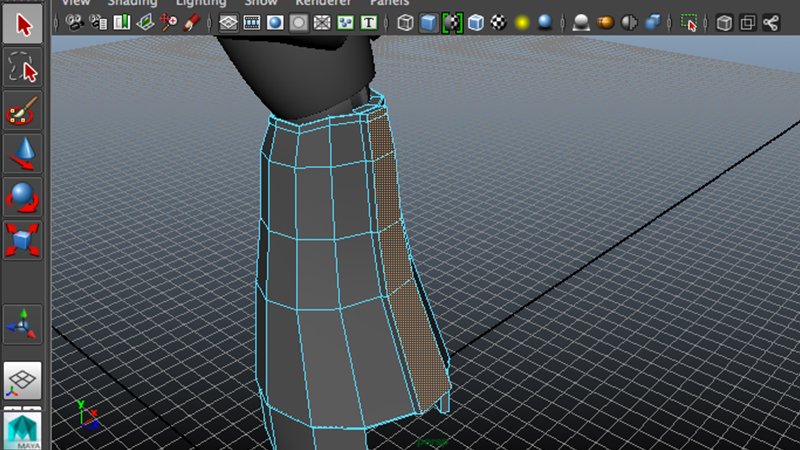 You may want to use the Merge Vertex Tool and join the two pairs of vertices in the center of this extruded shin section and add some edge loops to tighten up each end of the lower leg. You can see in the image below how the extruded shin detail is now more prominent at the top and bottom once you add in a little bit of extra resolution.

Each foot for the mech is made from a front piece and back piece. Both pieces join back-to-back in the center of the lower leg. We can build the front piece first from a cube: 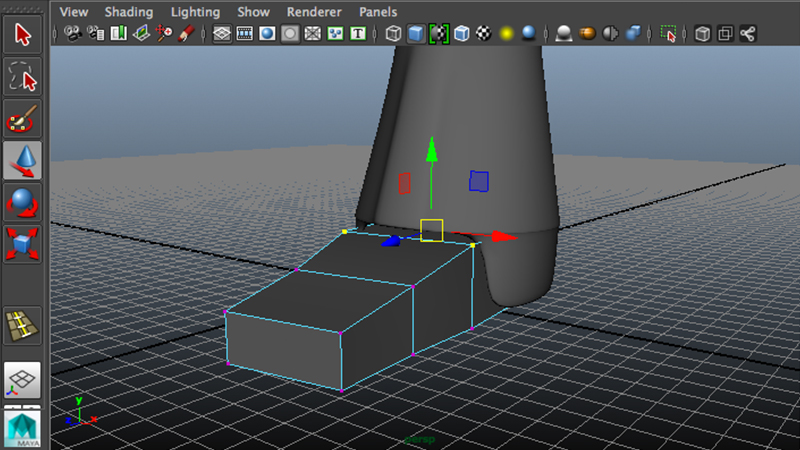 To form the back part of the foot, simply duplicate the front piece and rotate it about 180 degrees. You may even want to shorten the back piece a little to give the overall shape of the foot an asymmetrical look. It's up to you what you want your mech's foot to look like. If the foot is too rounded, you can add some edge loops along each piece's edges to keep it squarish and more robotic looking. 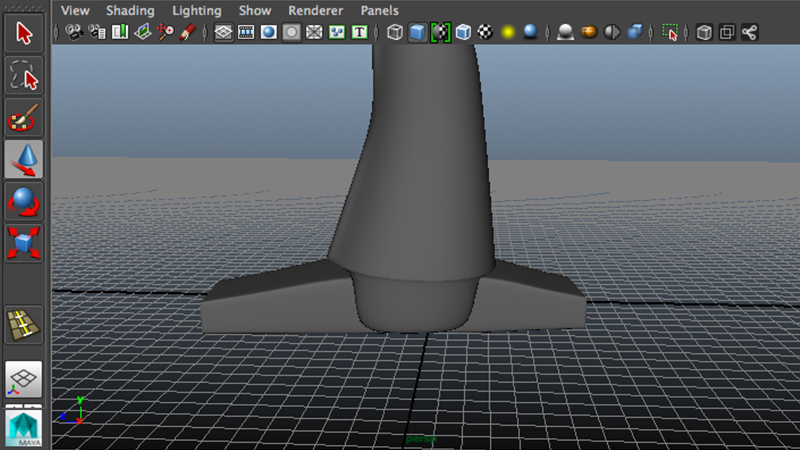 Finishing up the mech

Now that we've got all of the parts built for the left side of the mech, we can begin to group these various parts together in the Outliner. This organization will help us find larger sections later when we begin rigging and animating the mech. Here is how I grouped my mech's parts:

You can repeat this same process of grouping, naming, and re-positioning to create the right leg and right shoulder guard. After everything is copied to the other side, you can take all of the mech's remaining elements and group them in a way that seems reasonable to you. Note: When organizing your Maya scene, it's helpful to know that you can move any object in your Outliner by clicking and holding the MMB. As you can see in the image below I ended up with 5 different groups: Arms, Legs, Hoses, Torso, and Shoulders. 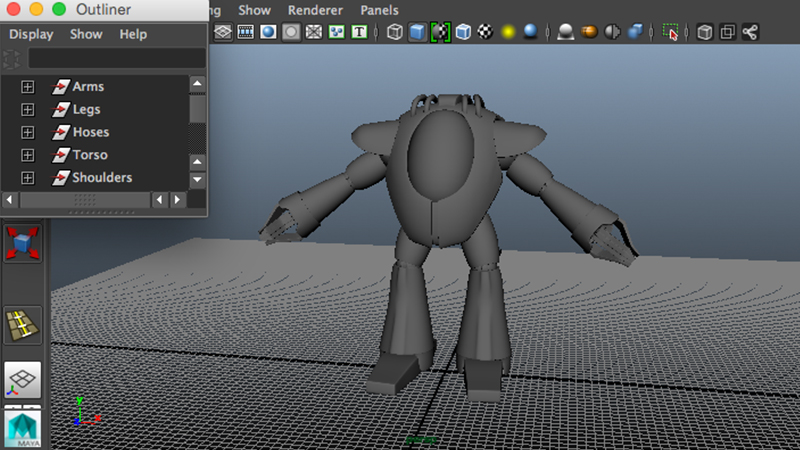 Well, that does it for the Maya Journal and my first serious venture into the realm of 3D modeling. I hope you've learned as much as I did throughout this process. As a 2D artist, I can say that making the switch to creating objects within 3D space has been quite the challenge. It's been an experience rife with frustrations and confusions, but also one of accomplishment and satisfaction! I also feel I've grown immensely from the experience and have gained a much better understanding of the artistic process as a whole. I hope for all of you who've stuck with me through this adventure have also prevailed and learned as much about basic modeling techniques in Maya as I have. Thanks for following along. Now, I've just got to learn to animate and texture this damn thing! Until next time...