If you're as excited as us about the new Unreal Engine 4 (UE4) you're probably itching to begin learning this powerful next-gen game engine. UE4 has some amazing features that make the game development process more intuitive and enjoyable. Whether you want to create a top-down 2D adventure game or an intense FPS with graphics on par with today's next-gen systems you have that ability with the very versatile UE4. However, if you have any previous experience with UDK and are ready to upgrade to Unreal Engine 4 you may find yourself at a road block because UE4 has basically been completely overhauled, from the interface to the scripting language and beyond. This doesn't mean UE4 is harder to use than UDK, in fact, the changes that have been done have made the overall experience that much better. It's important to keep in mind that if you're moving from UDK then there is going to be a bit of a learning curve. To help this transition process easier on you, this article will cover all the key things you need to know when moving from UDK to Unreal Engine 4 so you can spend less time having to re-learn the game engine and more time creating your games.

One of the most obvious changes you're going to see when first opening up Unreal Engine 4 is the newly designed interface. If you're moving from UDK this will take some getting use to. In the previous Unreal Engine the tools and menus were very condensed taking up a minimal amount of space, allowing for the viewport to take up the most screen real estate. In Unreal Engine 4 you'll see the different tools and menus take up the majority of the application, but UE4 actually allows you to completely customize the interface, letting you set up the interface to fit your needs. At first glance you may feel that the UE4 interface feels very cluttered, but in actuality the way it's designed allows for a much cleaner and organized workflow. For example, the devs at Epic Games took a lot of inspiration from modern day web browsers and incorporated a very similar tab system, so you can snap different menus and tools into a new tab on the tab bar located at the top of the application.

These operate the same way a typical website tab would behave in a web browser like Chrome or Firefox. These tabs can be moved, deleted or created by simply dragging a window onto the tab bar, and you can have as many tabs as you need. 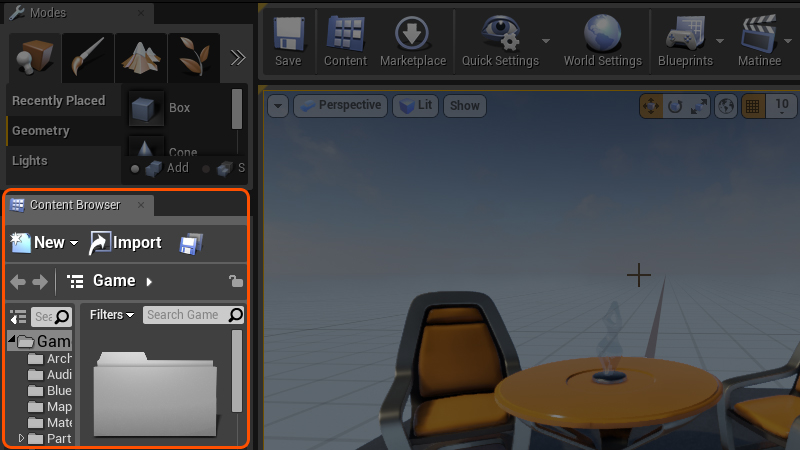 Along with the new tab system you'll find that the Content Browser which is something you probably found yourself opening quite often in UDK is now by default a menu snapped under the Modes toolset. However, now that the interface can be completely customized you can move the Content Browser to a new window or create a completely new tab for it in the tab toolbar. UDK has always been known for having a great level editor and allows you to quickly block out whole buildings and levels by using the BSP brushes which was a way to drop in basic primitive shapes that acted as a stand in until you actually committed to creating the geometry. 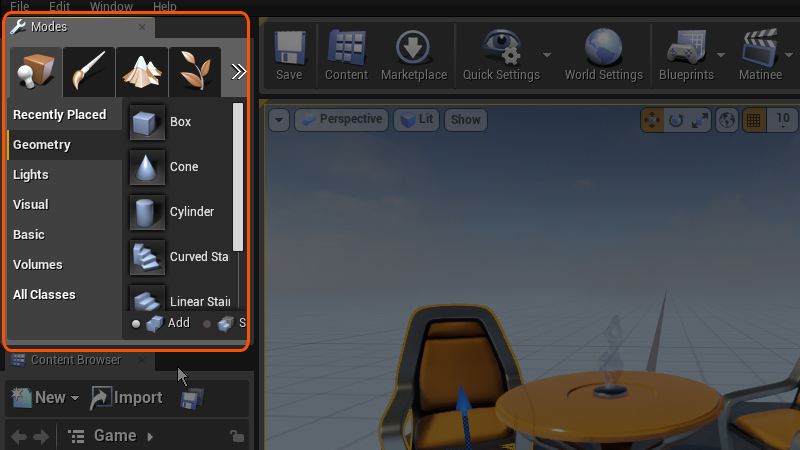 In Unreal Engine 4 the BSP brushes are still there but they're now called Geometry brushes and are located under the Place mode under the Modes panel. You still have access to things like a basic Cylinder or Curved and Linear stair cases. 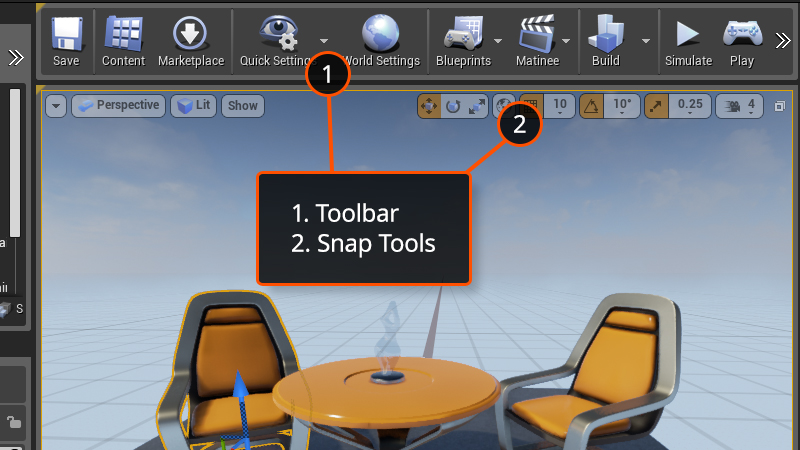 The toolbar by default is located above the viewport and contains all the most used commands, like Simulate and Play so you can test out your game, as well as many other commands. You'll also notice that the movement, rotation grid and angle snapping tools are now located directly in the viewport in the top right. Whereas in UDK these same tools were located outside the viewport in the bottom right of the interface. This helps to keep everything at close any easy reach. 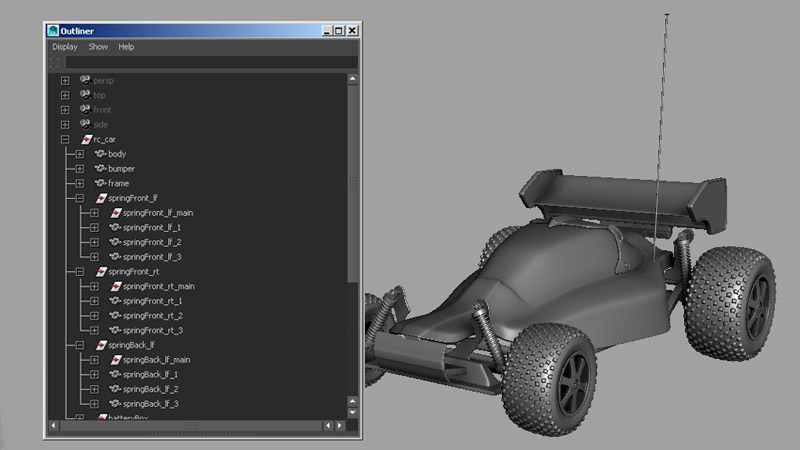 In UDK you had a menu called the Scene Browser which was helpful for seeing the different actors that made up your level, in UE4 this has been improved upon and is now the Scene Outliner which behaves a lot like the Outliner in Maya. You can name assets placed in the level straight in the Scene Outliner. The new Scene Outliner is extremely useful for quickly locating actors placed in a level. If you're a person who enjoys using hotkeys to speed up your workflow, UE4 lets you now assign custom hotkeys to editor commands. For example, you can assign a new keyboard shortcut for things like Play in Editor or pausing a simulation. You can find this under Edit>Settings>Keyboard Shortcuts. The navigation of the viewport has stayed pretty much the same as UDK. So if you hold the Left Mouse Button (LMB) it will allow you to move the camera forward, backward and left and right. If you hold down the Right Mouse Button (RMB) it will rotate the viewport where the camera is sitting. Similar to how you would look around in a FPS. And just like in UDK if you hold down both the RMB and LMB you can pan the camera.

In Unreal Engine 4 the material system is rather different than UDK because it uses a physically-based material system. With physically-based shading it approximates what light actually does to a material. The result is a much more accurate representation of real-world materials. These physically-based materials have become common place outside of games in animated movies like Monsters University, so it's great to see this functionality in UE4 now. In order to capture a more realistic representation that meets the demand of this generation of games Unreal Engine 4 has adapted this system in the game engine. 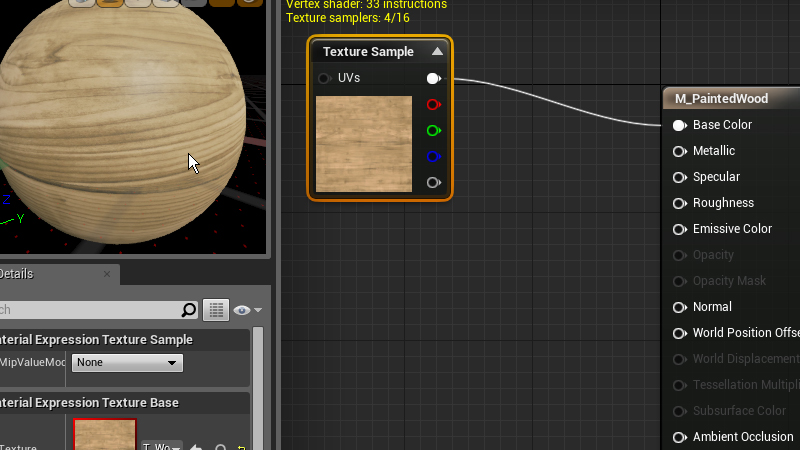 There are four main properties that you need to become familiar with when working with physically-based materials, Base Color, Metallic, Specular and Roughness. The Base Color is pretty self explanatory; it controls the overall color of the material. The Roughness simply controls how rough the material is. The Metallic property controls how close to metal the material is. A metal would have a metallic value of 1, and non metals would have a value of zero. Values between 0 and 1 can determine the look of materials like plastic or rusty metals. Specularity controls the amount of specular highlights on a material that is non metallic. It's important to remember that the specular value has no effect on metals.

In UDK you had Kismet, in UE4 this has been replaced with Blueprints. Blueprint is a visual node-based scripting interface, giving a helping hand to artists with little or no scripting knowledge. If you've used Kismet in UDK you'll see some similarities between the two, but it's not going to be exactly the same, and Blueprints are even more powerful than Kismet.

A very basic first script in a game engine is to toggle a light source on and off when a player touches it. This can be done in a matter of minutes in Blueprints. By first creating a node for the light source in Blueprint, and tying it in with a visibility function. In UDK what was called an action is now called a function in UE4 to match with the terminology of C++. However, the process for connecting a Target to a Variable is still relatively the same in Blueprints. The Blueprint system is powerful enough to create entire games without using traditional scripting editors. Unreal Engine 4 is an extremely powerful game engine, moving from UDK to UE4 can seem daunting though, however once you get familiar with the interface and where the old tools are now located as well as some of the new naming conventions you'll be able to get back into the swing of things in no time! To get an in-depth look at UE4 watch the Introduction to Unreal Engine 4 and be sure to check back for more Unreal Engine 4 tutorials as they get created.