Today, Side Effects Software announced its release of Houdini Indie, a limited commercial license version of the popular 3D/VFX software for devs who want access to Houdini but who are just getting started. Houdini Indie includes the same procedural node-based workflow and features as the commercial version of Houdini and the physically-based Mantra renderer. It can be used in all stages of animation and game production including procedural modelling, character animation, lighting, rendering, effects and compositing. Houdini Indie also gives artists render farm access using HQueue on Amazon’s EC2 compute cloud. Side Effects has also created Houdini Engine Indie, a standalone software that can be used to load Houdini Digital Assets into Maya, Cinema4D, and 3DS Max. 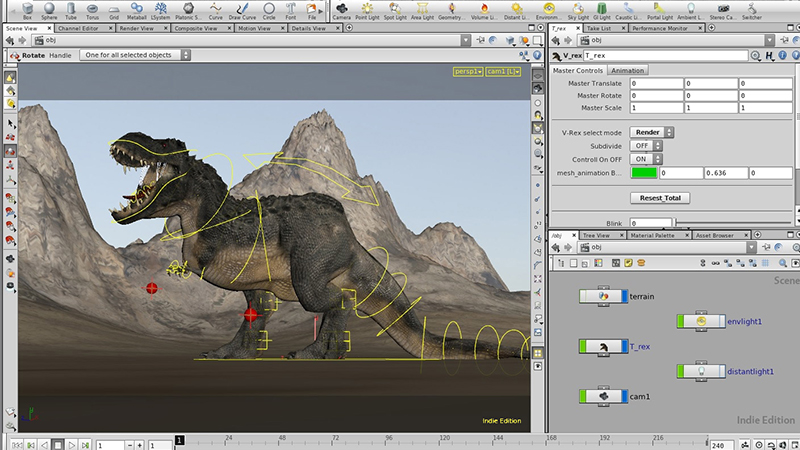 Houdini Indie seems a good alternative for start up studios with limited resources. Side Effects is limiting access to Houdini Indie to studios that have revenues less than $100K/year USD. This would make up a significant portion of total independent devs and freelancers. The annual subscription price will probably be re-assessed by the end of the yearly licensing agreement. If you're still under the $100K limit, you can continue to use the more affordable HI, If your gross profits has gone over, good for you! We think this is a win-win for both company and consumer. Side Effects' thinking seems to be that a studio or individual breaking the $100K barrier is more likely to be financially stable enough to afford the standard licensing version of Houdini in the future. This seems a reasonable assumption and helps explain the company's long term strategy at building brand loyalty among start ups groups while helping to incubate small studios. Houdini Indie is available today for $199 USD annually while Houdini Engine Indie is available for $99 USD annually. You can check out more Houdini Indie features and offer limitations here. Houdini Indie is a great resource for building that studio you've always wanted. Digital-Tutors can also be part of your strategy to build the knowledge and skills that help make you a contender in the marketplace. Or we can simply help you realize your creative dreams. Get started now by checking out our Introduction to Houdini series and you can get started off on the right foot financially and educationally. Let us know what you think by commenting below.