The OceanMaker Team Discusses Their Unique Approach to Film Making

This week at SXSW 2015 we got to meet up with Lucas Martell and his team to discuss what went into creating the post apocalyptic animated short film "The OceanMaker" and to learn more about their unique approach to film making Lucas calls "Destination Production." The OceanMaker is currently making the rounds at SXSW and has been received well by audiences and we were really impressed by the animated film here at Digital-Tutors; it will see an online release sometime later this week. Lucas' other endeavors include his award winning short film "Pigeon: Impossible" and is animation studio Mighty Coconut. Ocean Maker was created by a small team of eight extremely talented artists with years of experience under their belts. As with many animated short films it comes down to a labor of love, rather than earning a lot of money. The OceanMaker had an Indiegogo campaign, but Lucas knew he wouldn't able to pay the artists for a majority of their work. 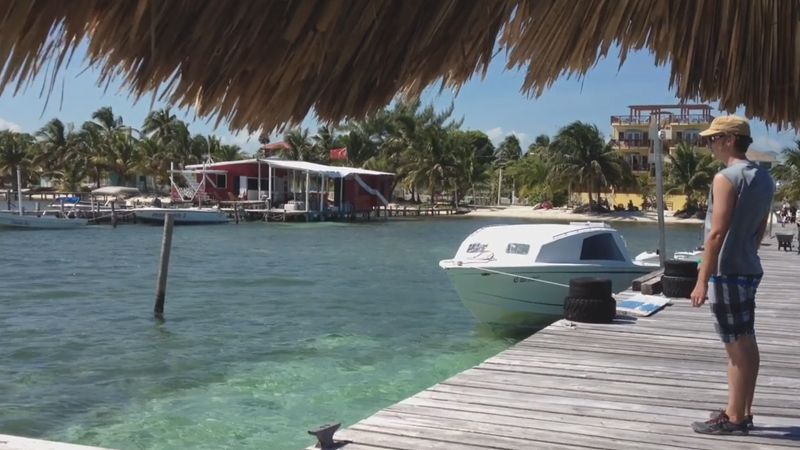 The best way to get around this and still get the artists on board was to bribe them a little. Instead of being held up in a dark office somewhere in the city which is where most animated productions take place he decided to take the production away from the hustle and bustle of the city. Lucas and his team flew all the artists out to a small island off the coast of Belize where they worked on the short film for six and a half weeks. Getting to work on an animated short film in "paradise" is something the artists quickly agreed to. This also allowed the team to get away from the distractions of day to day life, and go some place inspiring to work on the film. Lucas went on to explain how he came up with the destination production method, "I was working on a contract project in New York and working some very long hours, and realized I hadn't really gotten a chance to see the sun. I had been trying to figure out a way to do another project. I wanted to have a team, and I wanted to have them all in the same place and working full-time on the film, not just a few hours here and there like most of these other independent projects. Once I realized if it's so hard to get everyone in the same place, maybe that "place" can be the thing that draws them together as apposed to a barrier that keeps everyone wanting to work from home." This is an extremely unique approach to film making that proved to be a big success for Lucas and his team. Most animators are use to being held up in a dark room, but changing the location to a beautiful island off Belize is a perfect escape for the artists and is very much a vacation as it is work. As with any production there's going to be both things that work and things that don't work and bringing a group of artists to create an animated short film on an island of only about 1,000 people can pose some unique challenges, "We definitely learned a lot. One of the challenges with this is that because we were working on such a small budget we were kind of rolling the dice a little bit and everyone who came on board didn't really know exactly how it was going to work." Lucas went on to explain their setup on the island, "We did the entire film with laptops which surprisingly worked really well. We also had essentially dial-up internet on the island. Ultimately, that was probably the number one thing that made us so productive, is that people were either on their laptops working on the film or they were off enjoying the island. You don't have Facebook or Youtube distracting you." The Destination Production was very much like a camp as Lucas explained it, "Because we were on a budget we rented two houses, five of us were living in one of the houses and the central area became the work area. It worked in some instances, but we realized it would have been better to have a house for work, and house just for living. Everyone worked throughout the day, but people could go outside. We had mandatory team meetings by the pool, which was a really creative time where everyone talked about the story. For dinner, much like camp, we cleared the laptops and set the table and we all had dinner together every night."

Someone who is working on their own project, short film or movie can learn a lot from Lucas Martell's unique approach. Having a film making retreat can be an excellent way to keep the artists engaged and enjoying their work. We are all use to the dark windowless rooms that are often associated to the animation industry but breaking away from the norm can produce great results. That being said, this film making retreat will not work for every project as Lucas talked about, "Part of the reason this was so successful is that everyone working on it has several films and years of experience under their belt. So we knew going in how to manage a team of this size, how to get stuff done and how to organize everything. If it was just students who hadn't really done this before it could go off the rails really fast. For professionals which is exactly what I think this approach aims for most, because it's those people who want the chance to escape that grind of working at a huge studio." Lucas and his team wanted to make sure that the artists only worked eight hours a day because they knew the typical work schedule of an animator includes long hours and often burning the midnight oil. Even then, they found the artists were so passionate about the project it was hard to tear them away, "We realized our friends were so excited to work on this project that we had to stop them from working, I had to tell everybody to stop and get on a boat and go experience the country." Christina Martell, the Producer of The OceanMaker explained. Not only can producing a film on an island get a lot of great artists involved with the project but it can be an excellent way to have a more collaborative and fluid workflow between the team. This type of animated film making retreat might be something we'll start to see more often in the industry, and Lucas mentioned they planned on doing this Destination Production method more on future projects because it proved to work so well with The OceanMaker. Watch The OceanMaker trailer below: