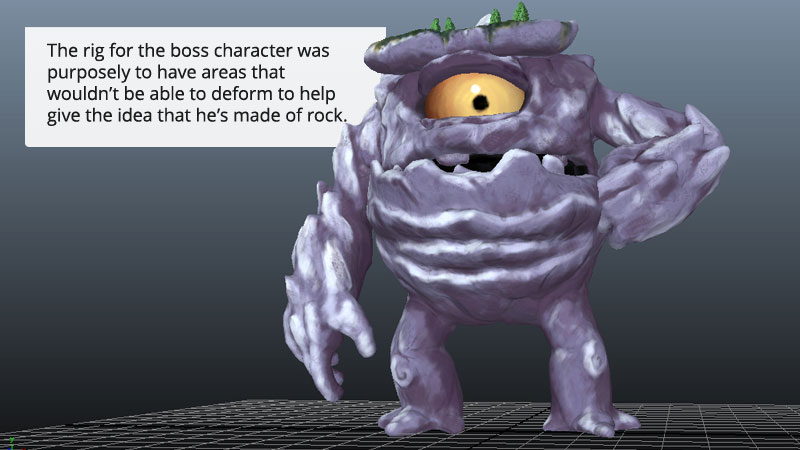 The boss enemy in this game was designed to look as if he were created from spell cast on a mountain. This idea allowed us to devise imaginative ways this creature would perform and interact with the hero. His underlining skeleton was built using a typical bipedal skeleton. The only exception to this was for his torso, which was intentionally rigged to look as if it could not deform. The reason for this was to help stay true to the boss's rock-like composition. Other than the typical control objects you'd expect any biped to have, (e.g, for the hands,  feet, center-of-gravity, etc.) special controls were implemented for his eyelids, eyebrows and the trees growing from his head. We also rigged the specularity in his eye to create the illusion of an actual specular highlight shining on his "reflective" his eye as he moves about in the game.

As mentioned in the article about the hero's rigging and animation, it was important for every piece of art to have a sense of consistency. With that in mind, several animations were built in order for players to have a fun experience as they battled this massive creature. The core of these animations included an introduction to the boss (seen in the animation above, this is the moment when the player awakens the boss), an idle, a hit, a strike (for both hands) and of course the final death animation. There were a few challenges with scale and the platforms that both the boss and player would interact with. Since this was a 2D game, the 3D boss had to seem as if he hit a platform the player was standing on as his attack. To assure that there was alignment between what was done in Unity and Maya LT, proxy geometry was first designed in Unity and then exported to Maya LT using a script. Once in Maya LT, the proxy mesh was repositioned and resized in order for the boss's interaction with the stage to look convincing when he was exported to Unity. After all animations were approved, the moment came for the boss to be exported from Maya LT. To prepare for exporting, all of the performances were baked to the model's skeleton and, exactly as was done with the hero character, all controls and nodes foreign to Unity were removed from the file to prepare for a clean and seamless export to Unity. As the final step, we then used Maya LT's Send to Unity feature to export the animated assets to Unity. If you're interested in seeing the in-depth step-by-step that went into the rigging and animation of the boss character for the indie game, you can do that by watching the Indie Game Development Pipeline Volume 7: Boss Character Rigging and Animation tutorial.