Today at the CINEMA 4D  presentations Manuel Casasola Merkle from Aixsponza gave us an in-depth look into their workflow for creating the Dreadnought trailer and how they leveraged CINEMA 4D and its new features to create a finished product for the upcoming space combat game Dreadnought.

Retopologizing With the Polygon Pen Tool

During the presentation Manuel stressed the importance of the brand new Polygon Pen tool found in R16. They received the high polygon ZBrush spaceship models from Yager (the devs behind Dreadnought) and needed to retopologize the models. They imported the meshes into CINEMA 4D and went through the process of retopologizing. 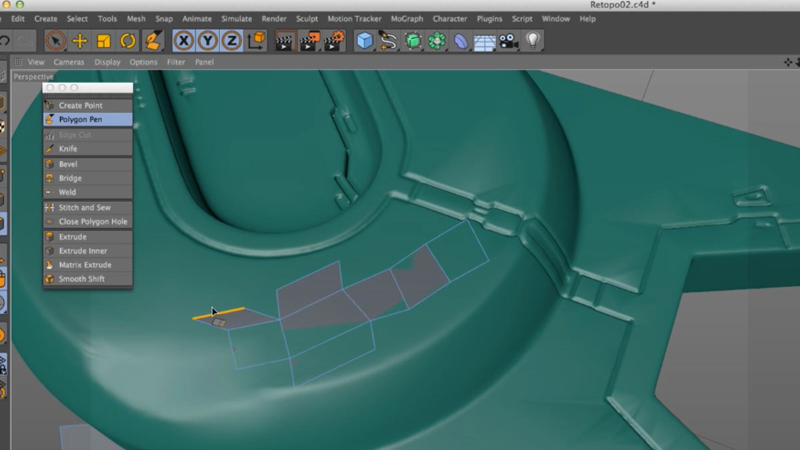 Manuel walked through the process by showing his workflow. With the Polygon Pen tool he could quickly create strips of polygons that will automatically snap to the surface of the object. The Polygon Pen also works a little like the Tweak mode in R14, by simply hovering over different components i.e. vertex, edge and face, you can select them. Using the Polygon Pen tool they were able to quickly create low polygon models out of the high res ZBrush models. Another very handy feature Manuel demonstrated was the ability to use the paint brush to actually paint loops of polygons on the surface of the high res model. By basically painting strips of polygons that snap directly to the surface they were able to very quickly get the low res model done extremely fast. 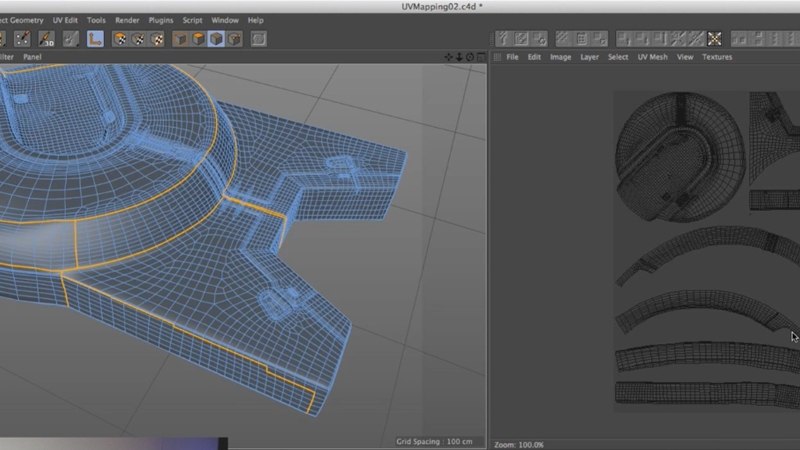 Manuel walked through their workflow for UV mapping in CINEMA 4D. To quickly create projections they used the loop tool to select a few edge loops and these edge loops were used to split up the UV islands on the model. Once the edges were selected he used the UV editor to relax the UVs and he then went into the individual islands and used different projections to quickly create a nice UV layout. 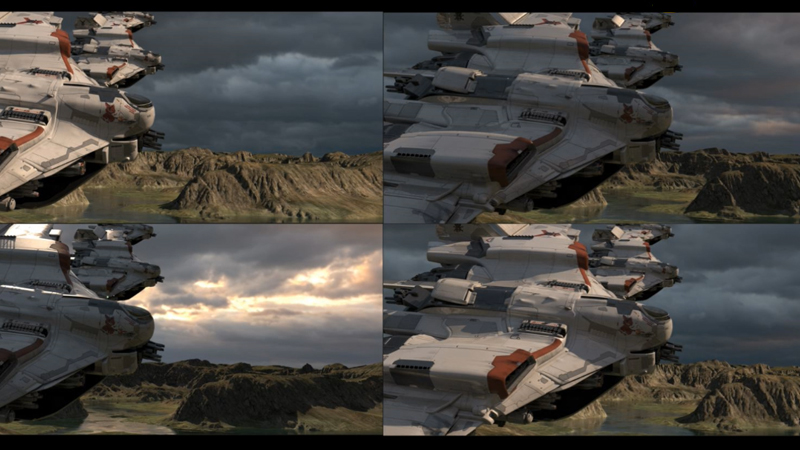 For the lighting in the trailer they used HDRI for the backgrounds, and to save render time they used a physical sky setup to create the lighting. They then went into several iterations of lighting and tested out different styles until they found the lighting that worked for the scene. 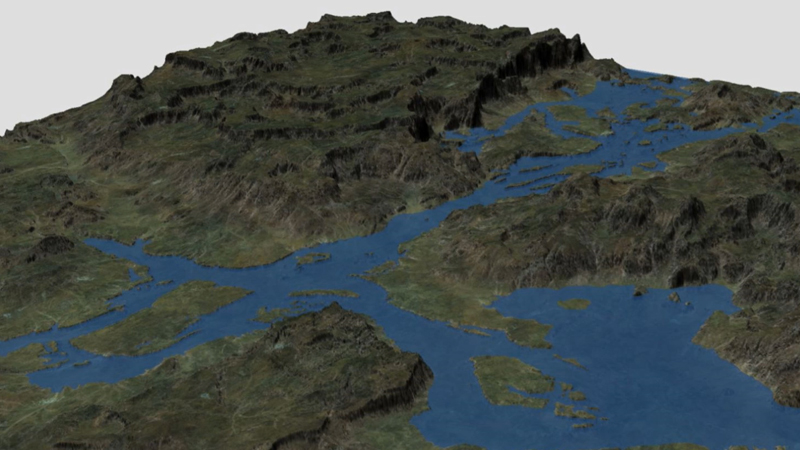 Manuel stated that all the shots in the trailer happened in the exact same environment, so this required them to create a massive environment that varied in terms of visuals. In order to create an environment like the one in the trailer they used World Machine, which allows for the generation of procedural terrains. World Machine will generate different types of erosion and produce very realistic results. Another benefit to World Machine is that they could derive texture maps from the generated terrain as well. For example, it separates the green lands like grass and forest from the actual rock surfaces. 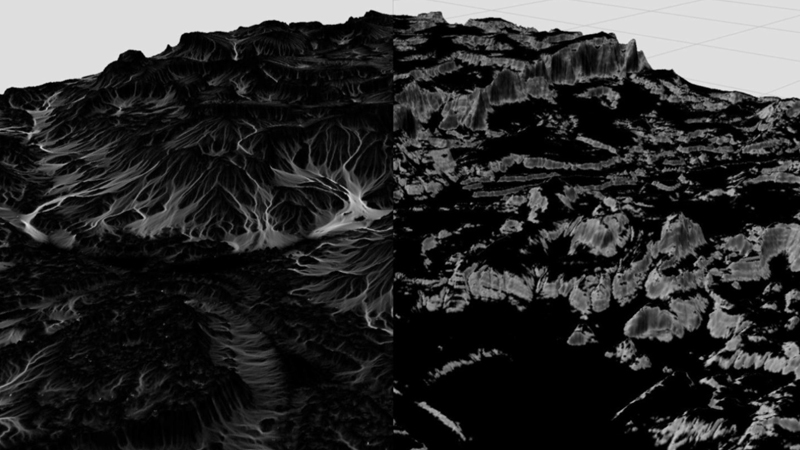 The problem they found with this was that the data sets were huge, in order to create all these details it required over 2TB of data, which is not possible to load in CINEMA 4D. In order to get around this Manuel stated that they utilized World Machine's use of a tile setup and they exported hundreds of individual tiles and re-exported them back into CINEMA 4D. Manuel also stated that they used very small textures that were far off in the distance and more detailed textures during the close up shots in the environment. With the new Python integration with CINEMA 4D Manuel was able to create scripts that would automate this process, for importing meshes, importing textures and even applying the textures to the meshes. All of this was done through Python scripting. 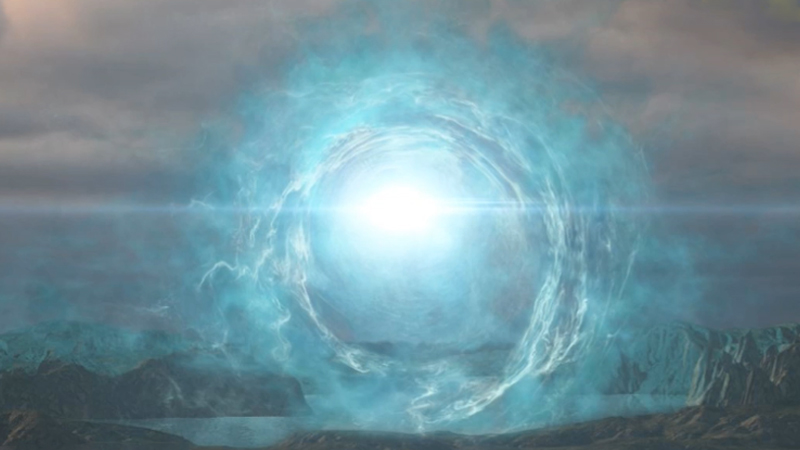 During Manuel's presentation he also dove into some new features of CINEMA 4D R16 that will help in production, one of those features is the integration of Arnold Renderer. During the demonstration Manuel walked through the alpha build. He covered some of the features like the IPR window which is an interactive rendering window used to quickly see changes. He also demonstrated Arnold's easy to use interface in CINEMA 4D. Arnold is something that has been requested for CINEMA 4D for quite some time, so this is a new feature bound to make quite a few people happy.