The Book of Life studio making VR cinema a reality

Animation studio, Reel FX is best known for producing the award-winning feature The Book of Life last year. However, the studio is also making some major moves into the realm of virtual reality, establishing its own department last year. It has partnered with companies like Samsung to produce content for its Gear VR series. For example, the studio created the "Shatter Reality Mobile VR App" for the Insurgent series, a trailer for The Book of Life, and a Jaeger Pilot experience based on the film Pacific Rim for Legendary Pictures. 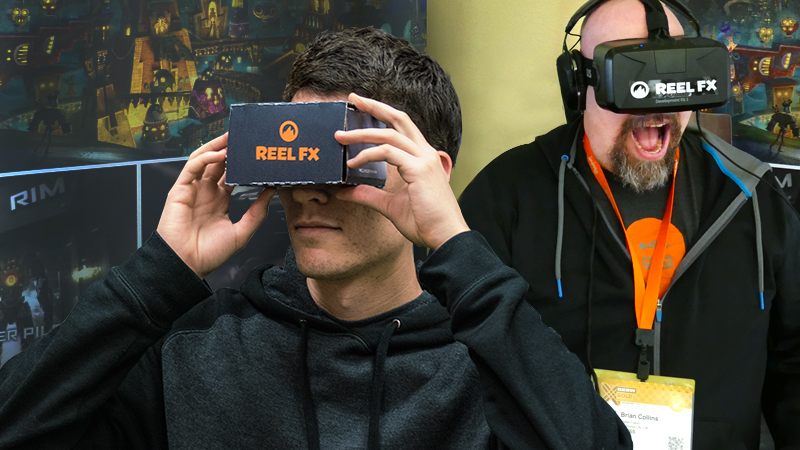 We first saw Reel FX’s work at SXSW and were blown away by its realism. The team suited us up with both the Oculus Rift and the Samsung VR Gear version and fully immersed us in these fantastical worlds. The VR magic that studios like Reel FX are producing are really pushing the technology and dev kits to their extremes. It's a platform that truly brings the magic of illusion back to the cinematic experience. Here is a brief description of our virtual trip.

March saw the release of the Insurgent VR downloadable app that was used to promote the movie. The app has two distinct parts: the first part is a 4-minute VR experience called “Insurgent – Shatter Reality,” which was created by the LA-based Kite & Lightning. 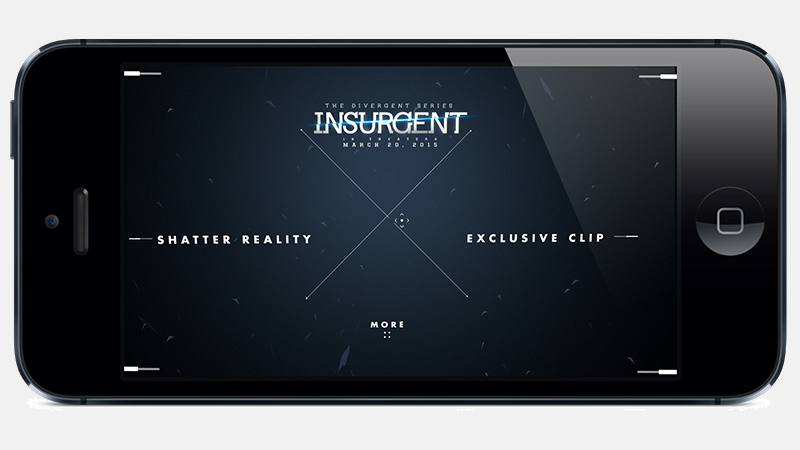 Shattering Reality's GUI © 2010-2015 Reel FX, Inc.[/caption] The experience is designed around a first-person perspective where the viewer takes the persona of a Divergent who's run through a series of preparedness tests. It feels similar to a video game tutorial in that you're sitting down and given information by other characters, one of which is actress Kate Winslet. At one point you're overlooking a ruined cityscape while a mad murder of black crows is dive bombing you in a 3D spectacular show that only Alfred Hitchcock or William Castle could fully appreciate. The second part of the Insurgent VR app was created by Reel FX in conjunction with Lionsgate and allows viewers to step into another CG room to watch an exclusive stereoscopic 3D clip from the film within a "virtual theater." The experience is uncanny in that you're essentially watching both a 3D and VR movie...that is until the screen explodes from the impact of a run-a-way train coming at you at full speed while the broken shards of the virtual theater screen float languidly before you. 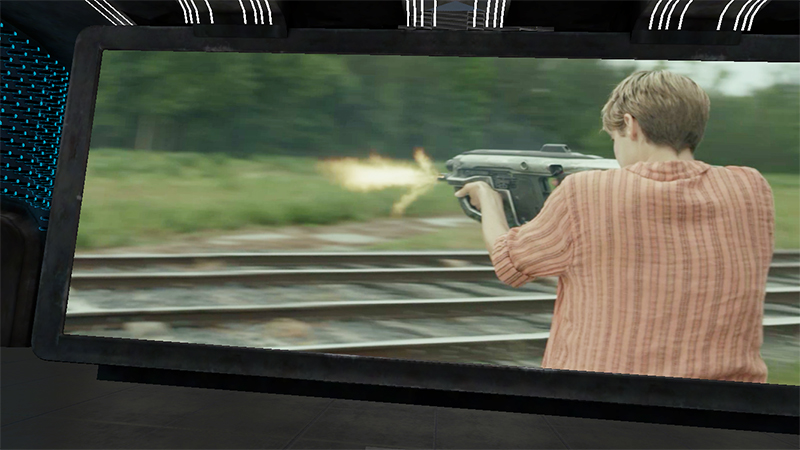 The "virtual theater" environment © 2010-2015 Reel FX, Inc.[/caption] The Insurgent app also utilizes gaze-based user controls that allow viewers to enter each experience simply by focusing on objects in the 3D environment. We were able to view the app via both the Oculus Rift and the Samsung VR gear, and the latency tolerances were low enough not to create noticeable lag or motion sickness. The Insurgent app is free to download at Google Play and iTunes and can work with Google Cardboard.

The Book of Life VR experience

Another spectacular VR experience Reel FX served up for us was The Book of Life VR Experience. The project was a collaborative effort between the studio and Dell, the technology used to produce The Book of Life. For this one, we were immersed even further by donning the Oculus Rift, a pair of headphones, and seated with our back to a stimulator pad that vibrated in conjunction with the action. The main action that makes up The Book of Life VR Experience is a very realistic roller coaster ride through the Land of the Remembered. 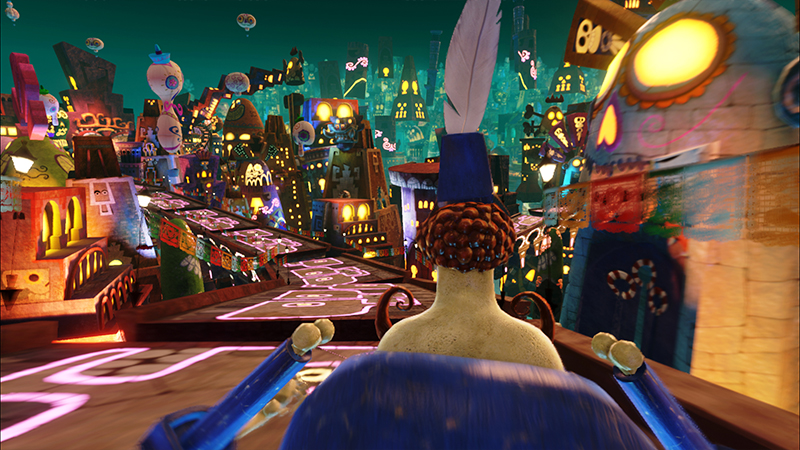 The Land of the Remembered VR experience © 2010-2015 Reel FX, Inc.[/caption]
The beauty and splendor of the 3D feature we witnessed last year was brought to its fullest measure when adapted to the VR platform. Embodying Manolo's skeletal body, you're taken on a tour of a truly mythical space, conceived with epic scope and rendered in beautiful detail. The roller coaster's ups and downs prompt a visceral reaction. When the ride ends your body is tricked into a type of pseudo-inertia that prompts a feeling of continued momentum despite being quietly seated. Your body finds itself moving forward, compelled beyond your control to continue the virtual movement forward. 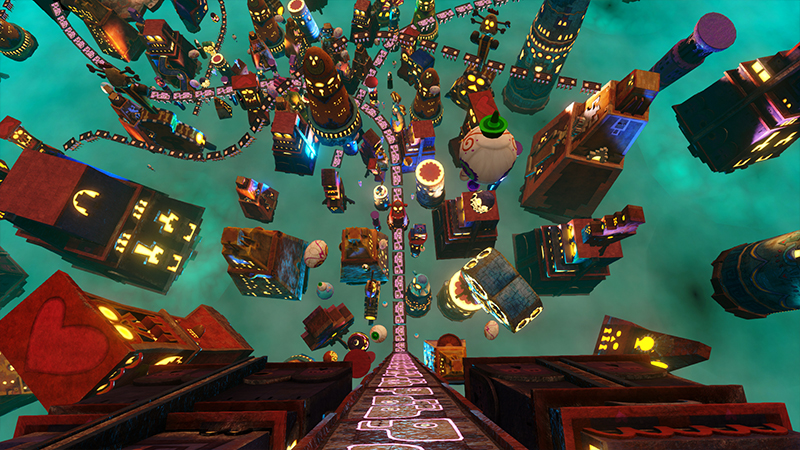 Riding the virtual rollercoaster © 2010-2015 Reel FX, Inc.[/caption]
Our experience with the The Book of Life VR was also enhanced because it was rendered in real time. This allowed you to not only look around 360 degrees but to also lean forward in your chair closer to the Oculus' motion tracking device that resulted in a similar movement from your avatar.

Released at last year's Comic-Con, the Jaeger Pilot experience was another VR ride that shows the potential for the platform, especially for video games. The project was a partnership with Reel FX, Oculus, and Legendary Pictures, producers of Pacific Rim. We witnessed this VR extravaganza on both the Rift and Samsung's gear VR. 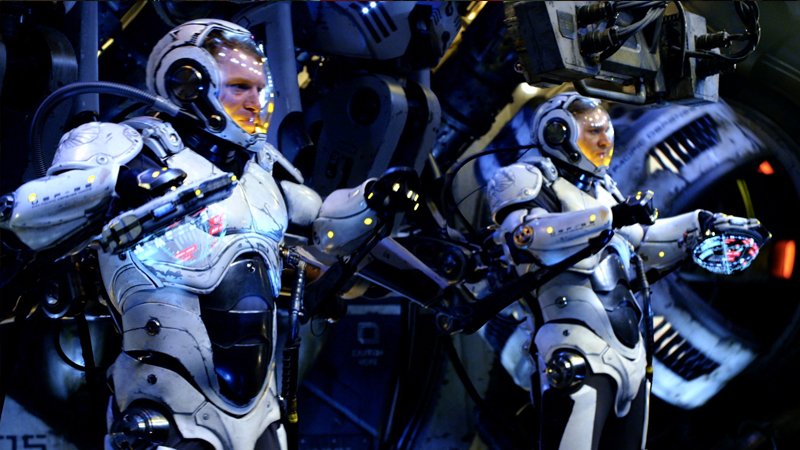 Scene from Pacific Rim © Warner Bros[/caption]
You begin within the Jaeger in your pilot position, strapped within your suit staring out the giant robot's head. Held in your hands is the control system device and your co-pilot is getting ready to fight the nasty Kaiju. Suddenly, the 80-story monstrosity attacks your ship, ripping open your Jaeger's face, and reeking havoc on the entire ship. The Jaeger Pilot experience really feels like a video game cinematic in 3D. Again, the scene could easily be a tutorial that introduces you to the mechanics of a game while being a virtual thrill ride at the same time. The VR magic that studios like Reel FX are producing is really pushing the technology and dev kits to their extremes. Witnessing professionally rendered VR projects has to be a feeling akin to those who first witnessed the birth of cinema. It's a platform that truly brings the magic of illusion back to the cinematic experience, and after witnessing what the folks at Reel FX's VR division have accomplished in such a short time, only leaves us wanting more!