Top Must See Films This Holiday for VFX Lovers

As a VFX artist, it's always good to find some great sources of inspiration to help push your art forward, and to give you that extra boost of energy if you're starting to get burnt out. What better way to get inspiration than to watch some of the VFX heavy movies created by some of the industry's most talented artists and studios. The summer time is typically the time of year when an assortment of blockbuster movies are released with as much CGI to make your eyes water. Well, let's not forget about the Christmas season, because like the summer, the Holiday season is often a time when many blockbusters are released for your viewing pleasure. Let's look at some of top must see films to be released this December, that all have one thing in common, lots and lots of VFX. 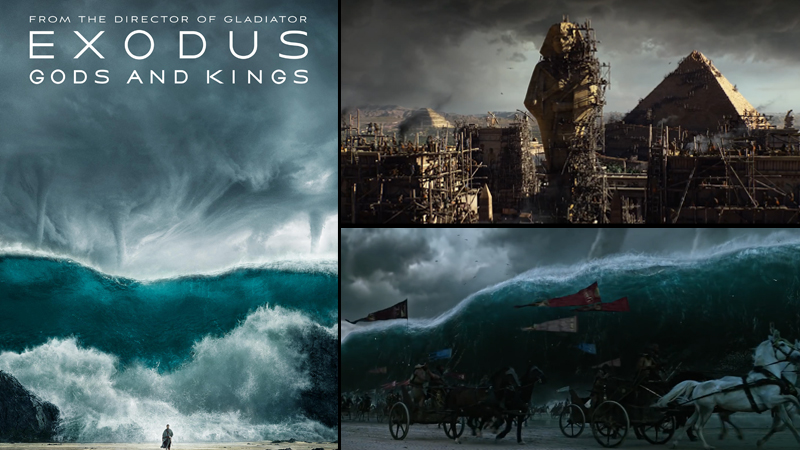 © 2014 Twentieth Century Fox Film Corporation. All rights reserved.[/caption] Director Ridley Scott's new film Exodus: Gods and Kings tells the story of Moses standing up against the Egyptian Pharaoh Ramses. From the trailers, you can see some very amazing VFX by some of the top VFX houses in the industry like Double Negative, Method Studios and MPC. From the spectacular sequence of the parting of the sea, to the immense battles taking place, Exodus: Gods and Kings shows off some truly impressive VFX that seems to continue throughout the entire movie. We were really impressed with the dynamics and fluid simulations involved in creating the towering wave that looms over the two armies battling on the ocean floor, and the vast crowd simulations for the charging chariots. The VFX artists also did an amazing job recreating Egypt which you can see in some of the shots in the trailer, like the building of the pyramids. 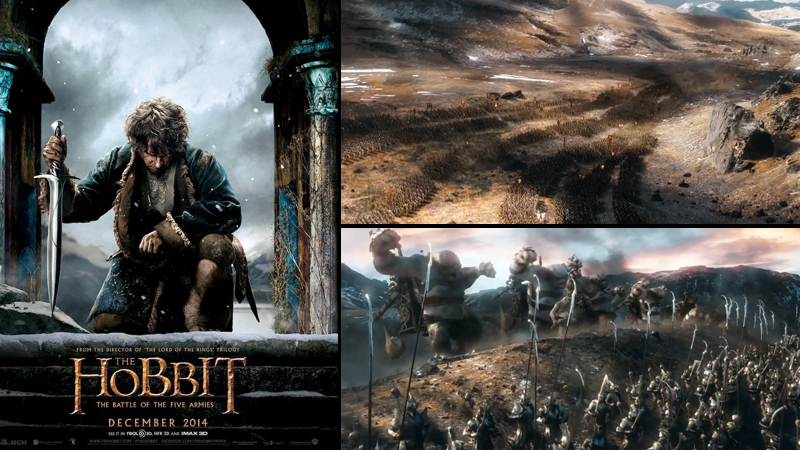 © 2014 Warner Bros. Ent. All Rights Reserved[/caption] The VFX house Weta Digital really established its name with The Lord of The Rings trilogy, and they continue to showcase their talent with the upcoming Hobbit: The Battle of the Five Armies, which is the conclusion to the three-part film. Whether or not you agree with the decision to split one book into three movies, you can't deny that as a VFX artist, getting three large doses of some spectacular VFX is not a bad thing.

The Hobbit: The Desolation of Smaug treated us to some extremely powerful work on the dragon creature Smaug, now we get to see the epic conclusion of Smaug's rage in The Hobbit: The Battle of the Five Armies. The trailer showcases some of the remarkable VFX work that you can expect to see in the film. Like the final battle in the film featuring striking crowd simulations that Weta Digital has improved and refined since The Lord of the Rings trilogy. As well as the impressive animation on the troll creatures taking position on top of a hill, that really showcases some great attention to timing and weight. Since just about every single shot in the film features some type of VFX, this is definitely a movie you'll want to see this December. 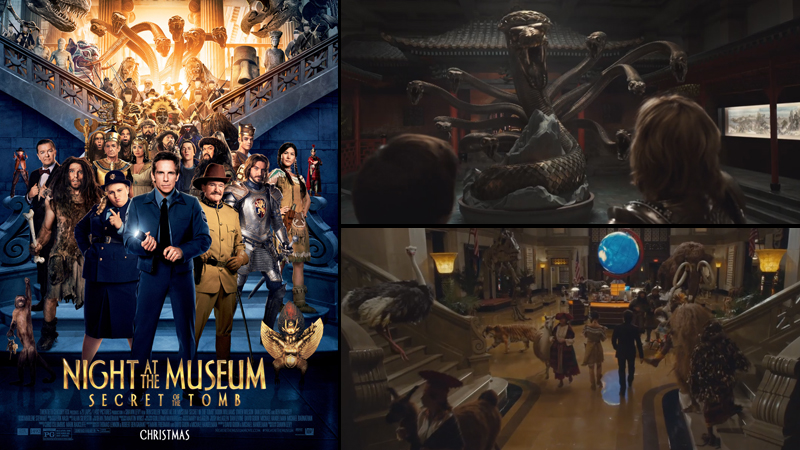 Night at the Museum 3: Secret of the Tomb might not have the huge battles with thousands of creatures on the screen at once that The Hobbit: The Battle of the Five Armies has. It still delivers some truly great VFX work from studios like Digital Domain and MPC, and shows some really excellent creature work from these studios. Like the skeleton T-Rex, or the massive Wooly Mammoth, and even the metal Lions that have come to life, the creature animation in the film is definitely one to study if you're an animator.

With a museum where everything comes to life, you can certainly expect to see a whole lot of VFX work involved. 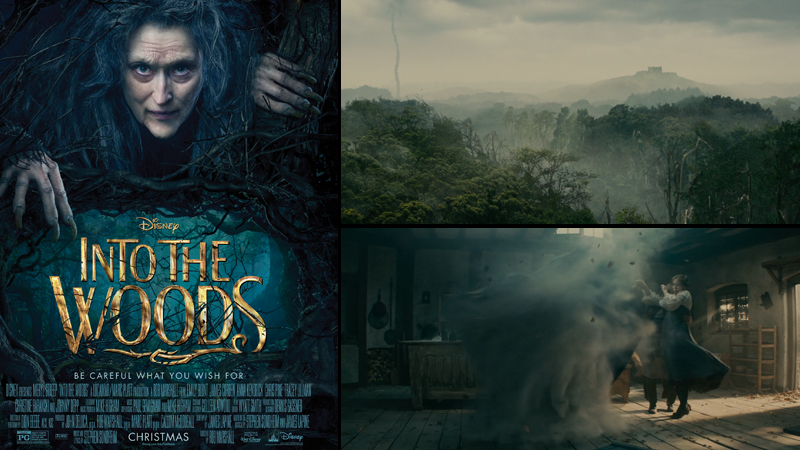 © Disney, All Right Reserved, Disney Lifestyle[/caption] Into the Woods is a musical fantasy film taking the plots of several different fairy tales like Little Red Riding Hood, Jack and the Beanstalk, Rapunzel, and Cinderella that all play a role in the film. With all these various fairy tales coming together, there is naturally a lot of VFX involved. You can see some really excellent particle effects in the trailer as the witch disappears in a whirlwind of smoke as well as the sequences of Jack climbing the beanstalk high into the sky. While the VFX may not consist of trampling Wooly Mammoths or Dragons, it's certainly impressive with much of the VFX in the film done by Soho VFX and MPC. 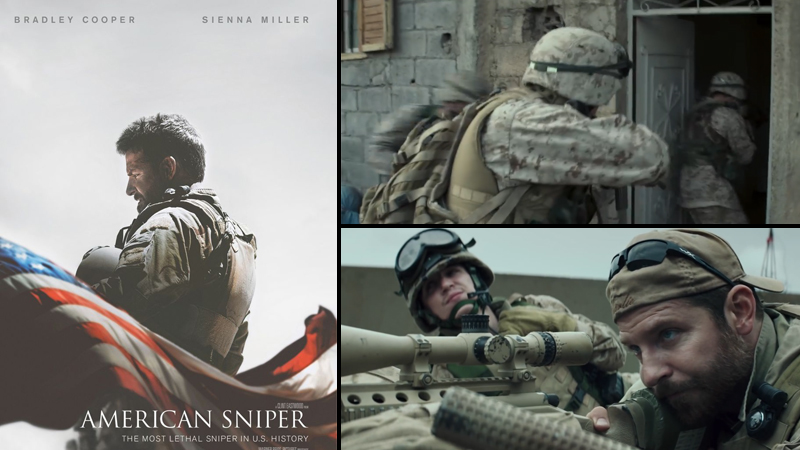 American Sniper is based on a true story that follows a sniper in the Iraq war. While the trailer focuses on tension rather than big explosions and gun fights, much of the VFX in the film is created by MPC, Sony Pictures Imageworks, Image Engine, Pacific Title and Lola Visual Effects. The VFX in American Sniper may not be as prominent as it is in some of the other movies listed above, as VFX artists, it's important to see how artists and studios handle the VFX in movies that is really not meant to be seen, or as much of a staple as it is in films like The Hobbit.

If you want to find some great inspiration as a VFX artist, these are five movies coming out in December of 2014 that will surely give you some ideas for your own work, and give a chance to visit the movie theater and call it homework. Visit the Digital-Tutors library to learn key VFX techniques that will help you create the effects that you see in today's hottest movies.