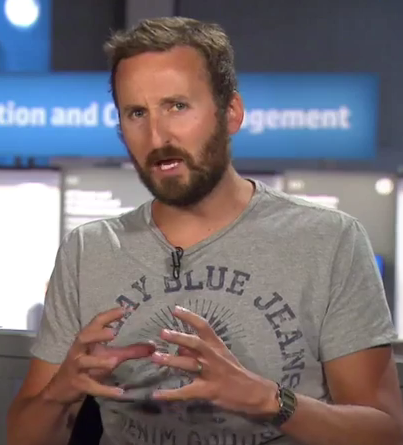 Pluralsight author Nigel Poulton has been hooked on technology since he was a kid—with everything about technology seeming completely magical. And these days, Nigel gets to bring that magic into his everyday life as an IT pro. Nigel has worked in the industry for 15 years, writes a popular, longstanding blog on storage, hosts the In Tech We Trust podcast and spends his free time rooting for his favorite football (soccer) team and with his family.

After his recent #DockerChat with us on Twitter, Nigel took some time to tell us about his career in the IT industry and a little bit of life outside of tech.

Why did you gravitate toward IT, enterprise storage and “all things Data Center” more so than other areas of technology?

Hard to say, but deep down I think that computer hardware always seemed cool. And to be the guy who built and understood the underlying infrastructure always appealed to me—though I have been gravitating away from that to a more DevOps focus over the last couple of years.

Why have you been moving to a more DevOps focus?

There’s a major shift going on in the industry toward DevOps, and I want to be on the curve, or ahead of the curve where possible! I also like the DevOps approach to working.

You’ve had some pretty great IT experience with some big names, mostly in large enterprise environments. Who are some of the companies you’ve worked with and what did your role consist of?

Most of my roles over the last 6-7 years have been with financial services organizations. I’ve had varying roles, including strategy & architecture, as well as operations and team leader roles. Whenever I’ve been in the architecture and strategy roles, I’ve felt like I’ve been losing my hands-on experience; and then when I’ve been in operations roles, I feel like I’m losing sight of the bigger picture.

What have been some of your biggest successes and breakthroughs while working with some of these companies?

I always like deploying new technologies. I implemented what was considered a world’s first at one organization (Active Directory Fast Forest Recovery Service using array-based snapshots). That was fun—seeing as how we encountered a lot of challenges along the way and had to involve senior engineers from many of the technology companies involved. We learned a lot and successfully delivered the project.

And any fails that you learned a lot from, but managed to turn around to come out on top?

Oh yeah. I remember starting as a new guy at a company only for the guy who was supposed to be my mentor to leave one week after I started. About a month later, we needed to recover a major MS Exchange server from backup—only none of the backups had the file we needed. It turned out this wasn’t a real file, and the way we’d been backing up Exchange didn’t backup that *file*. We ended up having to manually rebuild the Exchange serve, and the lesson we learned from that experience was to always practice your recoveries. So, we ironed out any problems like that before we ever had to use the service for real.

What advice would you give to someone who wants to begin a career in IT?

Do your “wrench time.” The best IT professionals are those who’ve spent the required hours doing the hands-on stuff. Think of it this way: the same way we would expect a chief surgeon to have worked his/her way up through the ranks and not skipped any important roles and jobs, we should expect the same for our own IT careers. Don’t try and skip ahead and become an architect or leader without having earned your stripes! If you do, you’ll have gaps in your skills and experience that will hold you back later in your career. Learn everything and do everything!

How did you become a Pluralsight author?

Back in the TrainSignal days, I was contacted via LinkedIn. Though prior to that, an existing TrainSignal author had recommended me, but at that time I was too busy. Second time of asking (via LinkedIn) I decided to give it a go! And I’ve never looked back!

You’ve authored a number of IT courses on CompTIA Storage and Linux. Do you have a favorite course?

My most recent course – Docker Deep Dive – is definitely my favorite course! It’s a fairly detailed course (and I like details) on a really cool technology that’s revolutionizing IT and application delivery. So for me that’s a perfect combo—cool technology that is making waves and getting into a fair amount of detail as to how it works!

You feel that Docker is revolutionizing the industry. Can you elaborate on what Docker is and why you feel it’s a game-changer?

First up, working with Docker reminds me of when I first got introduced to VMware—it just feels right and like it’s about to change things! So that’s a gut feel. But it’s also an amazingly simple technology to grasp and work with. At a really high level, it’s like a more efficient version of virtual machine technology, and designed for modern web-scale apps—and who doesn’t want that!

Recently, you joined us for a Twitter chat, or #DockerChat I should say (which can be viewed here). What do you find is the biggest concern people have about Docker, and what are your thoughts?

People wonder whether it’s a fad and if it will be around for the long run. People also don’t know how they can leverage it within their organizations. Both of which are standard concerns for any new and revolutionary technology. My recent Docker Deep Dive course aims to help fix the latter of those two problems by walking viewers through exactly how Docker works and how to get it up and running.

You host a tech podcast, called In Tech We Trust. Great name! Why did you decide to call it this and what can we expect from this podcast?

Oh…it was sooooo hard coming up with a name for the podcast. We must have floated about 50 names before shortlisting “Tech Force One” and “In Tech We Trust.” We picked In Tech We Trust, as Tech Force One seemed a bit pretentious. Check out our logo, that’s awesome and homemade too. As for the podcast itself, we’re a weekly show that rounds up news and events in the infrastructure tech world. So if you want to stay on top of what’s going on in the world of infrastructure tech, give us a listen and we’ll keep you informed. 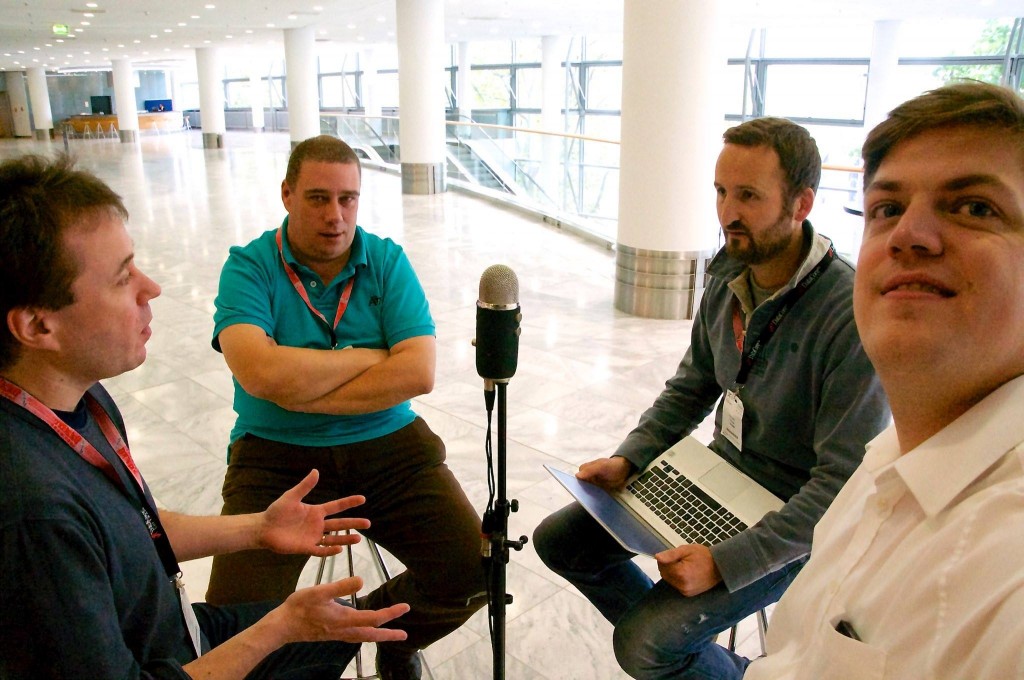 What’s your favorite part of working in tech and IT?

I love learning new stuff. Anything new that I don’t understand is kinda magical to me. And I love learning and taking the mystery out of stuff. I also love dealing with problems. One of my favorite things about working in IT operations was dealing with major severity 1 issues - you learn soooooo much when troubleshooting.

When you’re having a tough time solving a tech problem, what do you do to regain your focus?

Step back from it: take a run, ride my bike, or sometimes just take a hot shower. Quite often that clears my mind and I get my inspiration.

Last time I spoke with you, you were off to Dubai and Barcelona. I take it you travel a lot for work. Any favorite places your tech career has taken you?

I’ve traveled enough for it to stop being fun. Barcelona is probably my favorite city. But apart from that, I do like Silicon Valley because of all the tech innovation that goes on there. I love tech and especially new tech, so it’s kind of the perfect place for that— like a kid in a candy store!

What prank would you pull with your tech powers?

I think I’d hack into secret government databases and find out if any of the major conspiracy theories are true: Did we fake the moon landing? Are there colonies on Mars? Have we received communication from other planets?

Who do you admire most within the tech industry?

I admire innovation, so I admire startups and anyone working at them. I guess I’d like to be involved with startups, to help get something awesome off the ground and help it start disrupting and making change happen!

While you’re a tech professional, what are your other hobbies?

When I occasionally do get free time, then I split it among the following: family (husband and dad to three daughters), fitness (I run, cycle and play football (soccer) and lift weights) and supporting a crappy football team, Sunderland AFC. 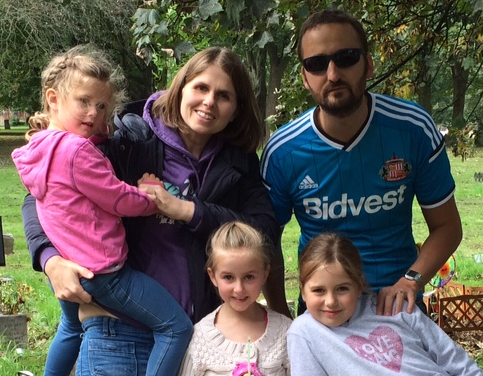 What is the toughest thing about being a Sunderland AFC fan?

We’re crap and always will be. Because of where our city is located geographically, nobody wants to come and play for us, so we’ll never attract the top players! That’s depressing. If I could start life again, I wouldn’t care about football. But my dad got me into it when I was a boy, and now there’s no getting it out of me.

You live in Cheshire, England. What’s the best thing about living in Cheshire?

It’s a beautiful part of England with a lot of rural spots and great places to run and ride my bike. The people are awesome too—very down-to-earth and family focused as well as being driven and successful at what they do. They’re my kind of people!

What are you most excited about when it comes to the future of technology?

Learning new stuff and changing the world! The world is all about technology now and that means working with tech is more exciting than ever!