CompTIA revised its A+ certification credential again, and it’s time to make sure that you’re fully up to speed with what’s new and what’s changed in the exam blueprints. So, let’s start with a  quick overview and then dive right into the details.

For those who don’t know, CompTIA (pronounced comp-TEE-ah) is a non-profit trade association based in Chicago that publishes a number of vendor-neutral IT certification programs. Newcomers to the field are attracted to the A+ because its content (computer repair and maintenance) is more approachable than, say, mobile device management or cloud computing infrastructures.

The A+ certification is globally recognized and accredited, and even carries an ISO/ANSI status. This means that earning the A+ provides you with practical, respected validation of your hardware and software support skills.

To earn your A+ certificate, you need to pass two exams, one of which focuses mainly on hardware (the 220-901), and the other on software (the 220-902). Check the CompTIA A+ exam pricing page for details, but be prepared to dig deeply into your wallet to pay for your exam vouchers—they aren’t cheap.

In comparing the exam details between the 800 and 900 series certifications, I’ve adapted the following points from the Exam Details table on CompTIA’s Web site.

First off, the 801/802 exams launched in December 2012, and the 901/902 exams launched on December 15, 2015. As you know, a lot happens in IT over the course of three years. We’ll see later in this article how CompTIA has stripped away old technology and included new tech trends in its current exam blueprints.

Both the 800 and 900 series A+ exams share the same basic metadata:

Finally, both the 800 and 900 series tests have a three-year expiration attached to them. CompTIA offers plenty of options for renewing your credential; check here for details. 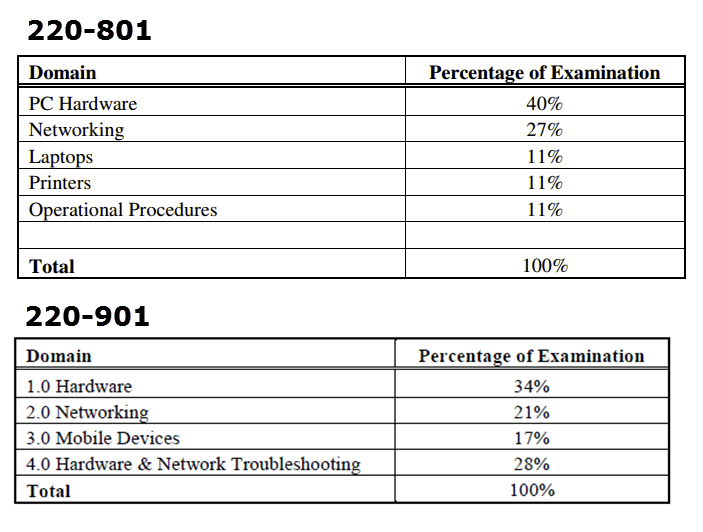 OK, we see that the first two content domains, covering hardware and networking, remained largely static between the 801 and 901 certs. Under the covers, however, you’ll discover that CompTIA removed obsolete hardware (like older CPU and RAM architectures) and included coverage of modern hardware trends (like SLI and Crossfire GPU linking).

The Laptops domain in 220-801 has been broadened and deepened into the Mobile Devices domain in 220-901. This means you’ll be expected to know far more than traditional laptops. Additionally, you’ll need to understand the basics of tablets, phablets, e-readers, smartphones and other mobile hardware.

Printers have long been a staple content area for the A+ Hardware exam. Strangely enough, CompTIA moved the 801 Printers domain into the 901 Hardware domain. Likewise, CompTIA extracted the troubleshooting bits that were previously strewn throughout the 220-801 blueprint into the Hardware & Network Troubleshooting domain in 220-901.

Finally, we’ll see in a moment that CompTIA took the 220-801 Operational Procedures domain and moved it to 220-902. This makes sense because, historically, the 802/902 exam is focused more on software and professional “soft” skills as opposed to hardware.

Now, we’ll perform the same comparison, this time between the 802 and 902 tests: 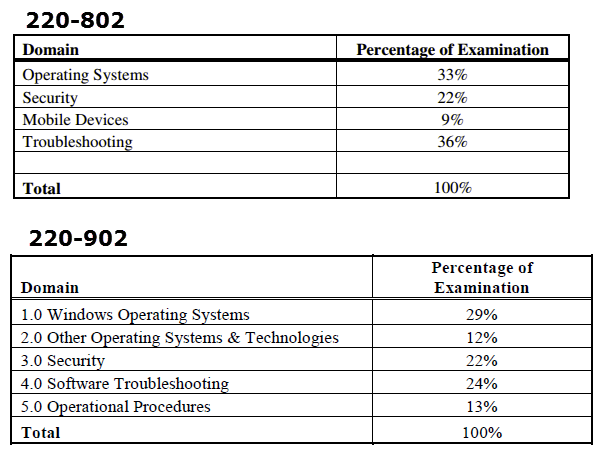 The first domain of both the 802 and 902 tests focuses on Windows operating systems. However, CompTIA (finally) does justice to Linux and Apple OS X by adding the Other Operating Systems & Technologies domain to 902.

Security is present in both exam versions with the same weighting. Of course, you can expect to see coverage of newer security trends in 902, such as mobile device security.

Lastly, we have the requisite soft skills and professional conduct stuff placed in the 902 Operational Procedures domain.

Having spent a great deal of time in the weeds of all four exams, allow me to summarize the major trends in the 900 series A+ exams:

Removal of obsolete technology. CompTIA has been dinged in the past for requiring exam candidates to know technologies that don’t exist anymore. I think it did a good job in stripping the legacy stuff out of the blueprints and bringing the content up to date.

Focus on mobile device hardware and software. CompTIA recognizes that just about everyone has at least one smart device in their life now, so it packed the 901 and 902 blueprints with mobile device management skills.

Inclusion of non-Microsoft operating systems. The CompTIA A+ exams are supposed to be vendor neutral. This leads many exam candidates to question why the 802 software test focused so strongly on Windows.

I think the answer to that question is that CompTIA probably considers market dominance in its equations of which technologies to cover on its tests. Let’s face it, Microsoft Windows dominates the desktop in both business and consumer environments.

That said, I’m proud of CompTIA for requiring A+ candidates to know a few things about non-Microsoft operating systems like OS X and Linux. If I had a complaint regarding CompTIA’s Microsoft coverage, though, it would be the complete absence of Windows PowerShell from the objectives. This is inexcusable because Windows PowerShell is the de facto command-line administrative interface for windows. As of this writing, we’re still expected to know the old MS-DOS-era command-line tools—that’s crazy. But then again, CompTIA never asked for my input.

We have full coverage of both the 800- and 900-series A+ exams here at Pluralsight, and we look forward to helping you learn. Please feel free to connect with me either through the Discussion tab in our Web player or directly via e-mail. Happy studying, and all the best to you!

is a full-time author with the Pluralsight IT Ops division. He's worked with Windows Server since NT 4.0, and is totally in love with Windows PowerShell. Follow him on Twitter @TechTrainerTim.