When you complete the update to Android Studio 0.4.5 and open one of your existing projects, you'll see this scary message:

What in the world is that message telling us? It feels kind of like an “it’s broken” message. We know it's bad but have no information as to what actually happened. Clicking on the “open event log” link to the right of the error message gives us a little more information.

Finally something we can work with. Apparently the latest update to Android Studio requires a newer version of Gradle (the build system), and we now need version 1.9 or above. Updating our project configuration to use the newer version of Gradle should help. To change the Gradle build settings, open the build.gradle file that’s a peer to the application’s src folder (be sure to open the correct build.gradle file, there are multiple in the project hierarchy). 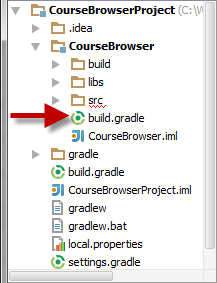 Inside that file you'll find a number of dependencies including the following entry for Gradle:

Here’s where we have to be careful. Notice that you currently see a version number of 0.5. You might be tempted to change that version to 1.9 since the error message says you need version 1.9 or above, but this would be wrong. The version number ties to the tools package rather than directly to the Gradle version. The proper fix is for us to change the 0.5.+ to 0.8.+.

So with the Gradle version issue resolved, we can try to build our project. And with that comes more good news...and bad news. The good news is that scary “Gradle project sync failed” message is gone. The bad news? Now we have have a build error.

Now that should do it. Let’s do the build again. And...we get the same error. It turns out that we did indeed need to download the latest Android SDK Build-tools, but we also needed to tell the Android Studio project to use those latest build tools. To do this go back to the same build.gradle file we worked on previously and locate the line for buildToolsVersion. 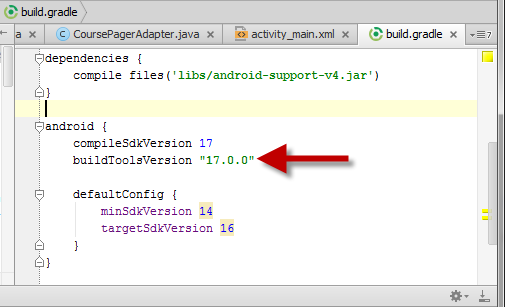 We need to change the buildToolsVersion value from 17.0.0 to 19.0.1. By changing the version number, the build system will now use the correct version of the build tools. And now the build works!

Putting it all together

We touched on a number of issues as we went through the process of identifying how to fix our project to work with Android Studio 0.4.5, but in reality there are just a few steps to get things fixed up. Then updated build.gradle file appears as follows: 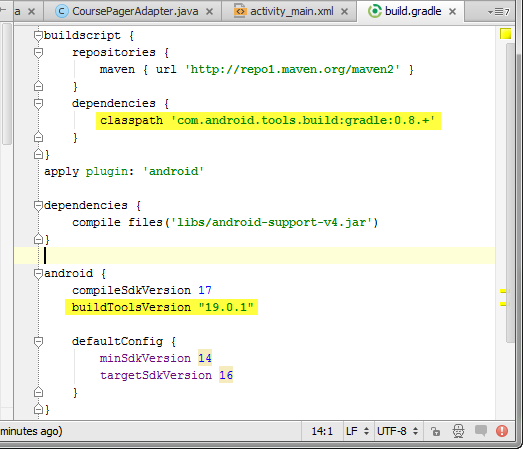 And with that, you should be up and running with Android Studio 0.4.5.

Jim Wilson is president of JW Hedgehog Inc., a consulting firm specializing in solutions for the Android, iOS, and Microsoft platforms. He has over 30 years of software development experience with the last 13 years heavily focused on mobile and location-based solutions. He is author of several Pluralsight courses on Android app development and cross-platform iOS/Android app development. Jim’s latest book is Creating Dynamic UI with Android Fragments.