Working as a director and VFX artist for the past ten years, I've seen many projects go over budget on VFX. From broadcast commercials to indie films, it's often the same easily avoidable mistakes on set that cause big problems for compositors and 3D artists. If you’re a digital artist gathering your footage or a director filming on a limited budget, these 10 tips will save you time and money once you get into post-production.

An experienced VFX artist on set will help you gather the right footage and avoid costly mistakes. The more VFX shots you're filming, the more important it is to have this person there. Even if you're just doing one shot, see if your VFX artist can stop by for a couple hours. You could film that shot first and get it out of the way. You don't need an Academy Award Winning VFX supervisor for your low-budget music video, but you also don't want a student who has never been on set. Your supervisor should have an overall understanding of VFX, experience with compositing and match-moving, and spent at least some time on set. Your friend the 2D animator who recently completed a 3D car modeling tutorial might do great work, but he may not know the first thing about the screen replacement shot you need. Every production will require a different set of VFX capabilities, but the ideal supervisor on-set is probably the person who will be completing the VFX in post. They'll be the most invested and able to offer suggestions that are within their capabilities. They might even surprise you with an idea you hadn’t considered. When a production can't afford to bring me on-set, I always advise them to shoot conservatively and not to try anything that's not in the storyboards. But when they do bring me on-set, I help the Director and DP solve problems, push creative boundaries, and avoid over-shooting. 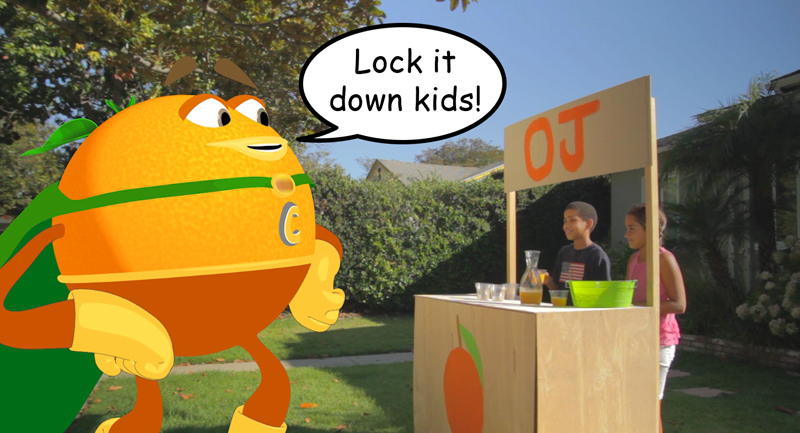 If you can't afford a VFX supervisor (or if you're a first-time VFX supervisor), my number one piece of advice is to lock the camera for any VFX shots. This will eliminate 3D match-moving and a host of other challenges that go with it. Your hand-held monster chase through the woods might look awesome on camera, but it will be a nightmare in post if you haven't planned for it. Find a way to tell your story with lock-down shots if you can. One easy trick is to take a static shot and add a little hand-held shake in post.

Storyboards are useful for any production, but especially one that requires VFX. Using a 3D previsualization or animatic is great if you can do it. At the very least, sketch out some stick figures or an overhead diagram on a piece of blank paper. Discuss this with the DP and the VFX artist days before the shoot. The communication will expose challenges you might face on set and allow you to make a checklist of the elements needed for each shot.

4. Don't use a green screen if you can help it

I can't tell you how many times a client has handed me a pile of green screen footage and said, "okay, now work your magic!" Many times I've turned down projects because a director thought he was "saving money" when a team of ILM rock stars couldn't materialize his green screen dreams. If you're shooting on green screen, it should be for a good reason. Is it because you happen to have access to a green screen stage? Bad reason. Think you'll save money on locations? What about the time and money you'll spend creating a digital environment? There are many good reasons to shoot on a green screen stage -- impossible locations, period pieces, and insert shots to name a few, but you should have the resources and planning to back it up. 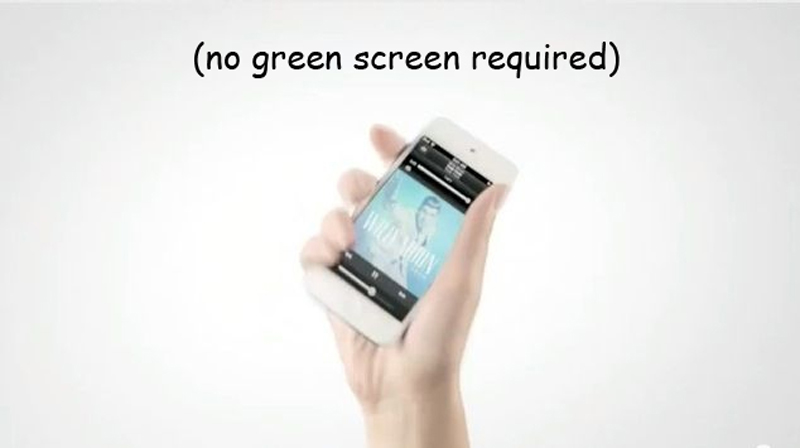 5. Use an insert green screen and a clean plate

The main instance where I do recommend a green screen is when it saves time on rotoscoping. Is there a CG spaceship landing behind your main character? Drop a green insert screen behind your subject! It will minimize rotoscoping, and, if you know how to pull a proper green key, it will be a better looking result. Of course, you'll also need to shoot a clean plate -- also known as a background plate. Clean plates are shot with no action or actors in the frame. They’re usually filmed last, although sometimes you may want to film them first if you're blowing something up or making a giant mess. Clean plates are also useful when you’re not using a green screen. I've spent countless hours rebuilding and repainting a shot because the production team didn't shoot a clean plate. It only takes a minute to clear the frame and roll the camera. If you're not sure if you should shoot a clean plate, that probably means you should shoot a clean plate. 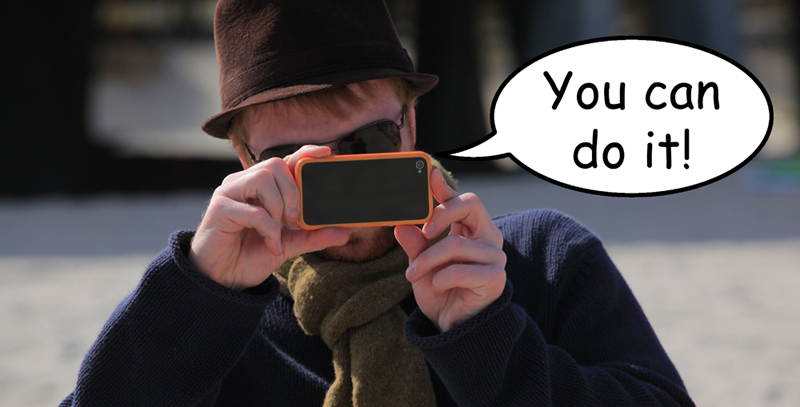 If your production requires complex VFX photography like HDRs, 360 panos or chrome ball shots, you’ll want to hire someone with that specific experience. But anyone with an iPhone can easily grab a few still photos of the walls and floor of the scene. For example, if you wanted to remove a dolly track from the floor of a shot, an overhead still photo of the floor (without the dolly track) would be very useful. If you’re doing scene extensions or matte paintings, it’s great to have photos of anything that might be referenced or reused in post--grass, dirt, rocks, concrete, sky, etc. Again, if you're unsure what still photos you need, ask your VFX artist.

7. Use tracking markers when you need them

The proper use of tracking markers could make up an entire class taught by an experienced VFX supervisor, so I won’t be able to cover it fully here. However, here are three quick tips:

8. Watch out for continuity

I get a lot of requests from independent films to move, remove, or add objects that are different from one take to the next. It’s impossible to control every detail of a film set. An actor can’t be expected to place his drink in the same spot every time, and even the most iconic films feature cigarettes that grow and shrink on every cut. However, if you can keep a close eye on continuity, it will save you money in post. I’ve seen some directors take a picture of the set and the actors at the end of each day. If they need to shoot pick-up shots weeks later, they know what everyone was wearing and exactly where that picture on the wall was hanging.

9. Watch out for reflections

A cameraman standing in the corner of the bathroom is not only creepy -- it ruins the illusion of film. Keep a close eye on anything reflective like mirrors, windows, or sunglasses. Often crew members and set pieces can be eliminated from a reflection by adjusting the angle of the camera on-set. Other times it’s not so simple. You may need to shoot a clean plate of the reverse angle or completely rebuild part of the shot in CG (a lot of money is spent removing film crews from car commercials). Check with your VFX artist if you’re filming something complicated like traveling through a window. 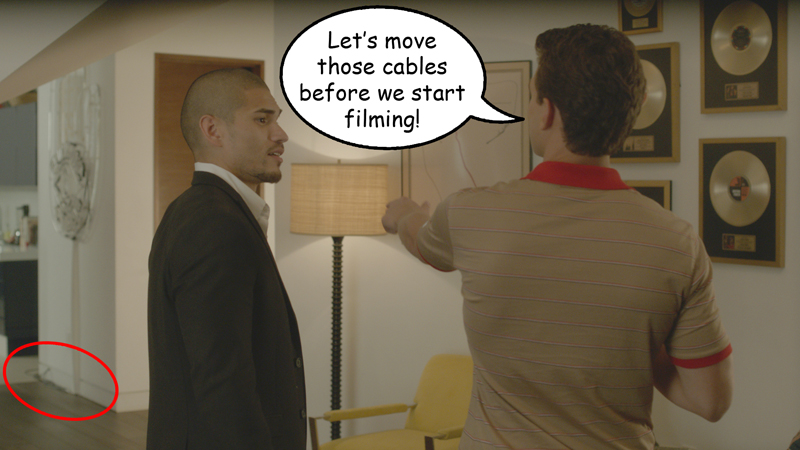 Sometimes I cash in on the adage, “we’ll fix it in post,” but usually it just gives me a headache. Big budget film shoots can afford to be sloppy because Lady Gaga won’t wait for you to move those sandbags in the corner - she’s got places to be. But if you’re shooting on a budget, you’ll save a lot of time and money in post by clearing cables, c-stands, and production assistants from the edge of your shot. Watching out for these mistakes is either a reflex or will become one after you get the bill. Also, unless you’re David Fincher, and you’ve got the budget for face replacement, hire a makeup artist!   These are some of the most common things I’ve seen in my career that help save time and money on any project. All of these steps take some planning and attention beforehand, but they can save you tons of effort on the back end. Let me know what time and money saving tips you might have by commenting below.