Create more appealing animations with the principle of arcs

When you watch someone do the robot, what’s the main characteristic that you see occurring? It’s probably the fact that every movement they make is completely linear and rigid. As humans, we don’t move in a linear fashion, robots do. When we move in the real world, arcs play a huge role in making our movements not seem robotic. Nearly everything we do moves in an arcing pattern, from simply turning our head, to waving at someone. If your animation is missing these arcs then suddenly it looks like your character is doing the robot. Unless you’re actually animating a robot, you’ll want to steer very clear of this robotic feel. One of the key ways of doing that is of course, keeping the principle of arcs in mind. In this article, we’re going to dive deeper into the principle of arcs so you can have a better understanding of it in your own animations.

Not all arcs are the same

A more obvious area you can find arcs clearly is the trajectory of an object as it’s thrown. Looking at a basketball, for example, when shot toward the basket it’ll travel in a clearly defined arcing path. Just as with anything in the real world, gravity has an effect and keeps the basketball from traveling to the basket in a perfectly straight line. It travels upward and slowly descends back to the ground. Of course, the more force something has behind it, the less of an arc it’ll have in its travel. A baseball pitcher throwing a fastball will travel extremely quickly and the arc wouldn’t be nearly as prominent, but it’s still there. A softball player, however, throws the ball in a much different way and the ball travels in a clear arc. So if you’re animating a baseball or basketball you need to consider arcs, right? Well, that is definitely true, but it’s not just for inanimate objects being acted upon by outside forces. Arcs are there for every action we take whether it’s a foot moving up to take a step or a hand reaching for a glass. Even though we do this unconsciously, it’s just how humans move. In animation, you have to constantly remember these things that are typically second nature to us. However, if you fail to incorporate arcs into your animation you’ll quickly get that ‘robotic’ feel to the animation, which you want avoid. Arcs help to add fluidity to an animation, and increased realism. If you look at the video example above, you can see two of the exact same animations side by side. The only difference is that one has a clearly defined arcing motion while the other is linear. The one that moves in an arcing path feels more natural and fluid. The other one, however, feels like a rigid animation. When it comes to animation, you always want the audience to forget that these are just 3D character puppets and believe that they are truly alive. Even something as small as not incorporating arcs into an animation can quickly destroy the illusion you’re trying to create.

It’s very easy to create linear movement in the 3D application, because the computer likes to work mathematically and the most logical way to move from point A to point B is to move in the straightest line possible. That’s why you should never trust the computer to do the animation for you. It’s up to you to go in there and make sure that your movements are fluid and believable. You can begin establishing an arcing motion very early on in the animation process. For example, when adding in the breakdown be thinking about the arc that would occur in the real world and put this into the breakdown. That way, the arc will already be established so when you eventually go into spline mode the computer won’t interpolate its own trajectory (which is always a rigid straight line). Once you start incorporating arcs into each area of your animation, even if it’s something as small as ensuring there’s an arc on your character’s fingers during an action, the more you add them the more it’ll start to become second nature. As you’re adding in breakdowns and inbetweens you’ll always keep arcs in the back of your mind and ensure you incorporate them into the poses. While just about everything we do moves in an arcing pattern, it’s important to be smart with this principle. There are certain situations where less of an arc will make more sense. For example, if someone is scared by a noise and looks in the direction of the sound, their head is probably going to shoot in that position because they are moving very quickly and they are frightened. This means there may hardly be a prominent arc. So it really just depends on the situation of the scene, and whether or not a broad arc will make more sense. 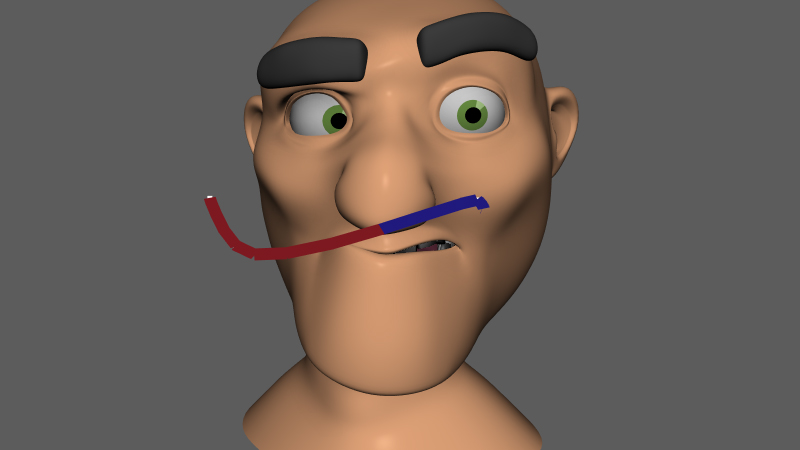 Most 3D applications have some way of tracking arcs very easily. With Maya you can either use the Grease Pencil tool, do it the old fashioned way and mark dots on each position or use the Motion Tracker tool. The best way is to pick one position on the body you want to track. For example, if you want to track the arcs on a character’s head as they turn, choose the tip of the nose. That being said, there’s a certain way you should first begin tracking your arcs and that is to work from the root of your character outward. The reason for this is to avoid causing yourself unnecessary work. Any changes you make to, say, the hips of the character can change the arcs on the wrists significantly. So you don’t want to track the arcs of the wrist and then go in and do the root of the character, because that’s only going to change the arc on the wrist based on how you change the root. Not all arcs travel in the same pattern, but you’ll probably find yourself commonly using a couple patterns of arcs. There’s the half circle arc, which you’ll likely be using most often. Then there’s the figure eight arc, which you can see during the arms on a walk cycle. The arc pattern should be dependent on the animation, because one pattern may make more sense for that particular action. Now that you have a stronger understanding of arcs, be sure to implement them into your animations to create more realistic and fluid movements. To dive in deeper, check out our 12 Principles of Animation article to learn more about the other key principles of animation.