How to Create Your First Character Rig in Blender: Part 3 - Control Curves

The final step of creating this very basic character rig in Maya is to make it animator friendly. When you're rigging your designing for the animator, which can be someone down the pipeline or even yourself. Animators need to have a clear indication of what is what on the rig, and an easy and intuitive way to move the joints around. You can certainly just select the bones you want to move, and animate that way, but that is cumbersome. Instead, you can create simple curves that are positioned outside the character mesh, each control will be tied to a bone, that way the animator can see clearly where each control is, and they can move and animate the controls rather than the bones. Let's go through the process of setting up a basic control system inside of Blender. If you haven't completed the first two articles in the series I recommend reading How to Create Your First Character Rig in Blender: Part 1 - Setting up the Armature and How to Create Your First Character Rig in Blender: Part 2 - Weight Painting.

Creating the Controls for the Upper Body

First we are going to create the controls for the upper body, which will consist of the hips, spine and chest bones. For this particular project we are going to keep the controls very simple, most of them being circles. The controls just need to be something that's easy to see and easy to select, spending time creating an intricate control design will not really be time well spent. The more rigs you create, the more controls you'll likely have saved off that you can bring into your scene and setup. However, we'll be creating all the controls we need for our rig. 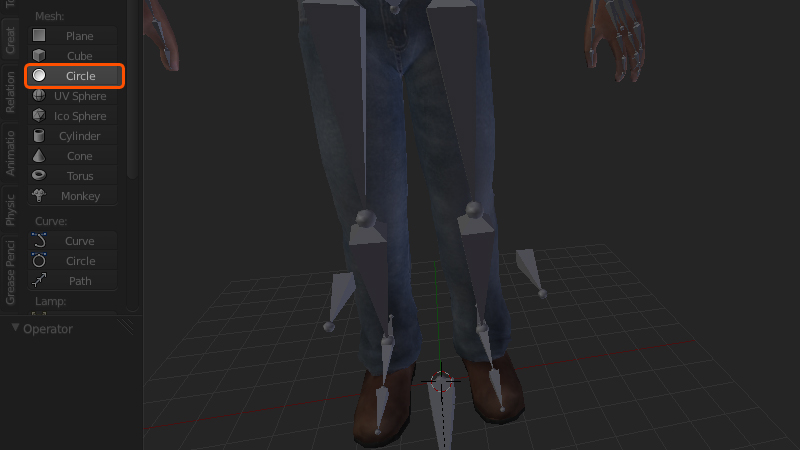 Let's first go over to the Create toolbar and select the Circle under the Mesh options. This will drop a simple circle into the scene. The main reason you want to use curves instead of geometry is because you want to keep the scene as simple as possible, if you add more geometry you create the risk of bogging down the scene making it slow to navigate and just not as responsive in general. 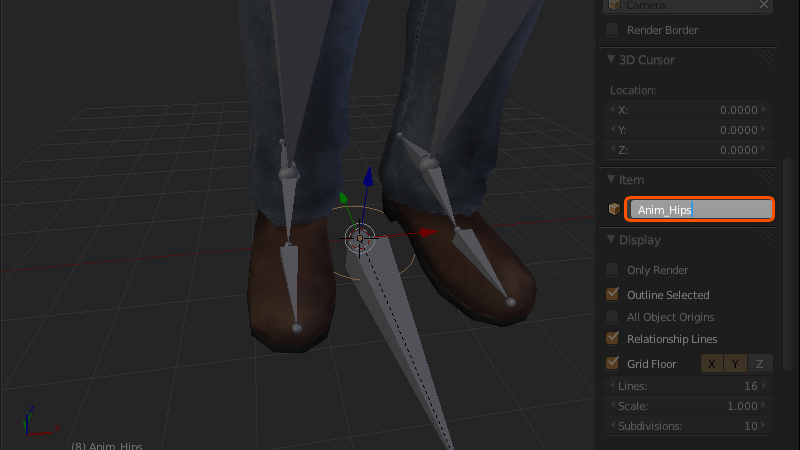 You'll want to make sure that the 3D cursor is back at its origin, if it's not you can press Shift+C to set it back to its default. With the circle now in the scene you can name it, I've called it "Anim_Hips." In order to connect the control curves to the bones themselves is a little bit different than you may be used to in typical 3D applications. So Blender basically uses the shape you created as a reference, and it converts the bone shape into the curve. It's probably easier to understand if I just walk you through the process, so let's do that. 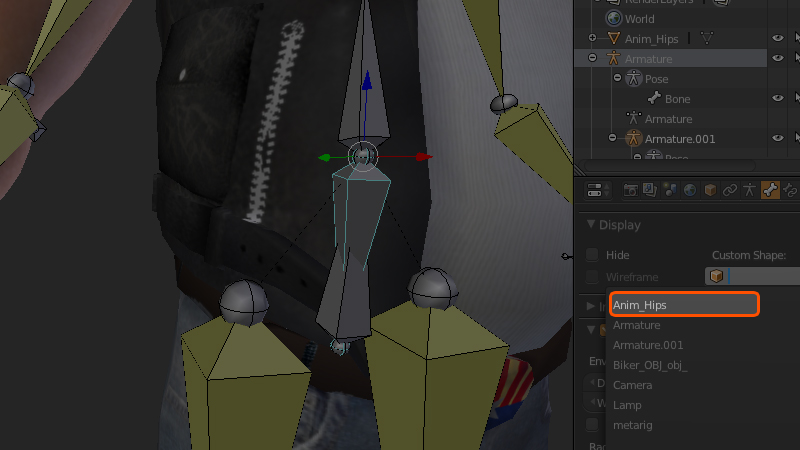 Go into Pose Mode and select the hip bone. Under the Bone properties panel scroll down until you see the Display tap. Under the Custom Shape box select it and change it to the new circle you just dropped into the scene. In my case, I'm changing it to "Anim_Hips." 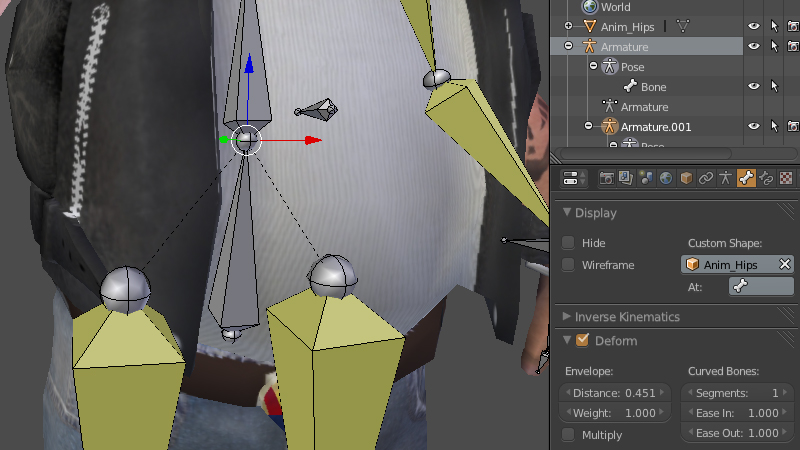 As soon as you do that, you should see that the hip bone is now no longer visible. Don't panic! as I mentioned above we've changed the bone to a custom shape, in our case the Anim_Hips curve. 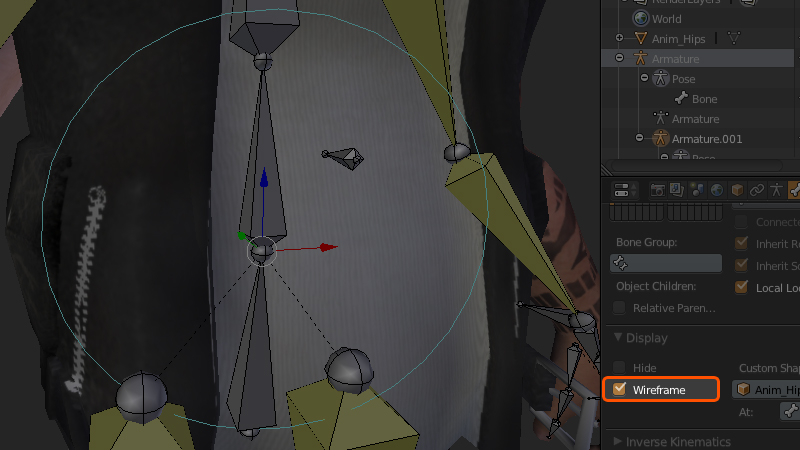 You won't be able to see the new shape until you check the Wireframe box under Display. Now you should see our circle placed at the root of the hip bone. However, you should see it doesn't really look how we want it to. So we'll need to make some changes to the original Anim_Hips curve. 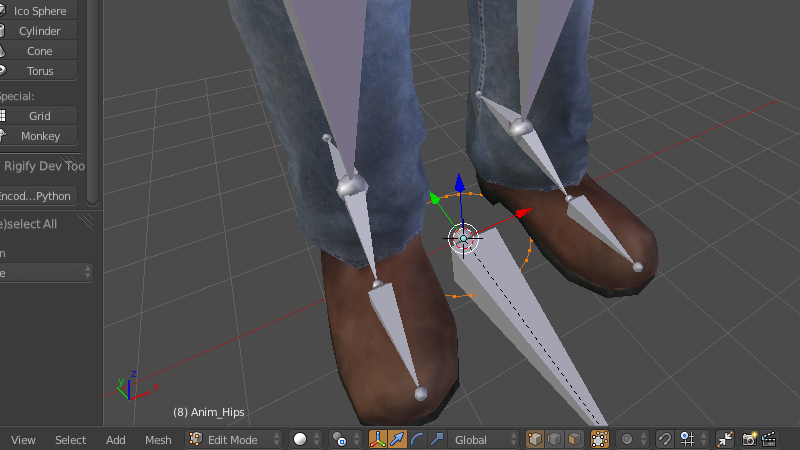 Go back into Object Mode and select the Anim_Hips curve, and then go into Edit Mode (the hotkey is Tab) and select all the vertices that make up the circle. You can select all by pressing "A". 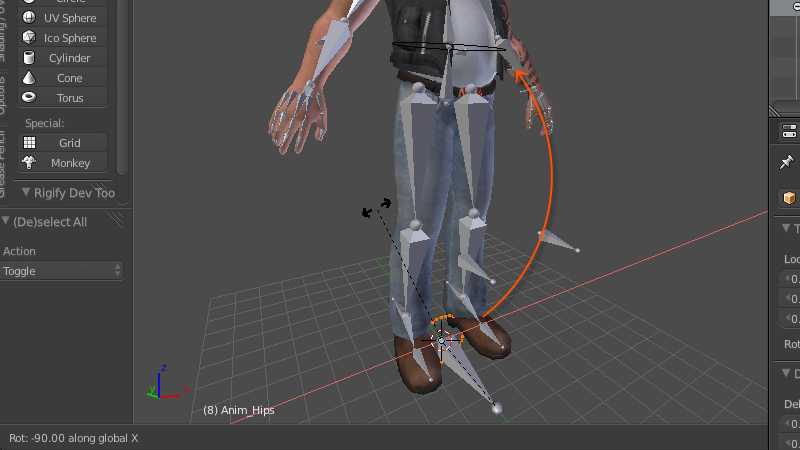 If we turn on snapping and set the snapping to increment, we can rotate the circle 90 degrees in the X axis. You can also scale the circle out slightly by pressing "S" you want to scale it so the circle is easily visible outside of the mesh. You'll notice that as you're editing the Anim_Hips circle you can see the changes reflect for the custom shape on the hips bone. 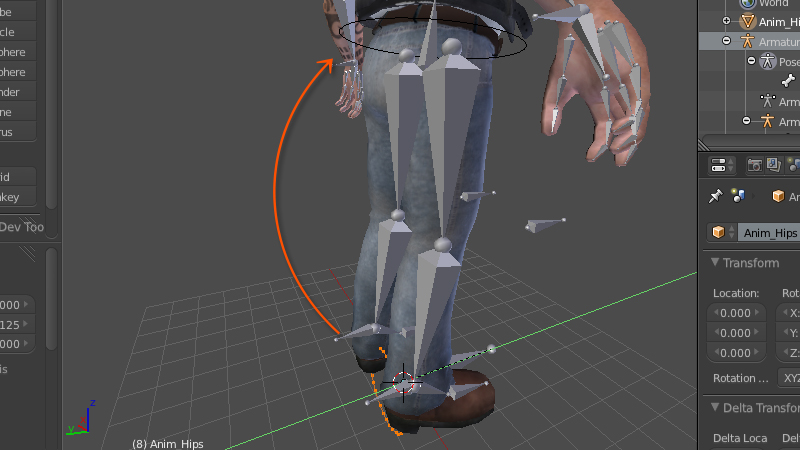 With the circle still selected this time translate it back in the Y axis so the custom shape for the bone will get lowered on the hips, try to get it to where it's around the belt area on our characters mesh. You'll have to edit the position of the custom shape because by default it's placed at the root of the bone, in our case it was slightly too high on the character mesh. Now when you go back into pose mode you can select the curve and rotate it and you'll see that it now affects the mesh. So basically we've just changed what the bone looks like. 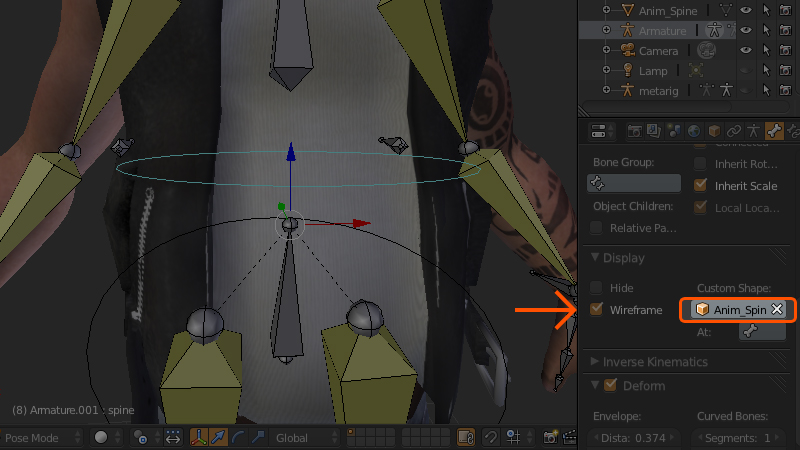 We can continue creating the rest of the chest controls by just duplicated the original Anim_Hips control and naming it Anim_Spine. Just like you did previously go into pose mode and select the Spine bone, under the Bone parameters change the Custom Shape to "Anim_Spine" and turn on Wireframe. 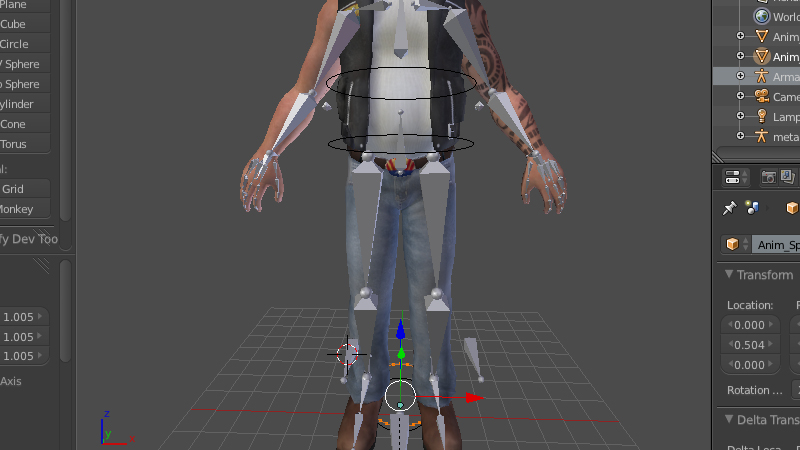 You may notice now the control curve is a little too small, so we can select the Anim_Spine control and go into Edit Mode and scale it up slightly. 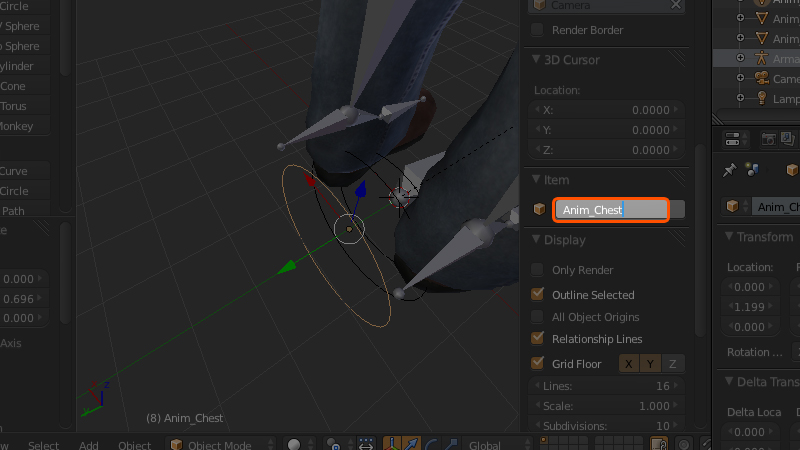 We can just repeat this process for the chest control, so now duplicate the Anim_Spine control and name it Anim_Chest. 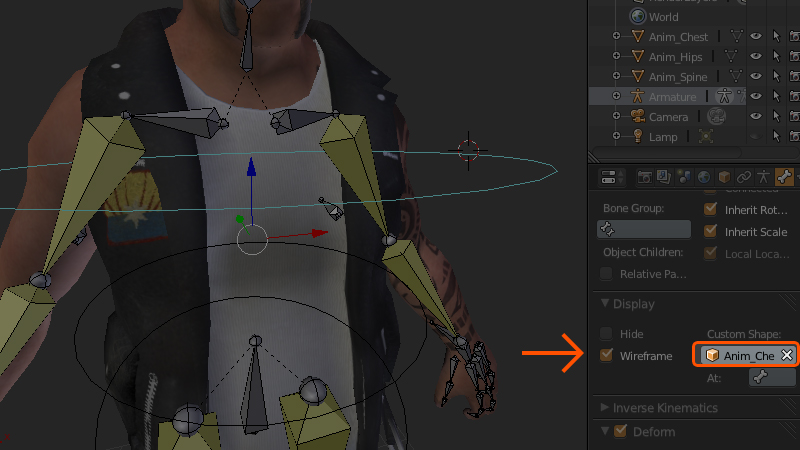 Go back into Pose Mode and select the chest bone, and change the Custom Shape to the Anim_Chest control and turn on Wireframe. You may notice the custom shape is just a little too big so we'll need to resize the Anim_Chest curve to adjust its size. Now you should have three bones with their custom shape set to the circles you created. When you go into pose mode you can now select the controls to manipulate the character. You can just go ahead and turn off the visibility of the original circles. 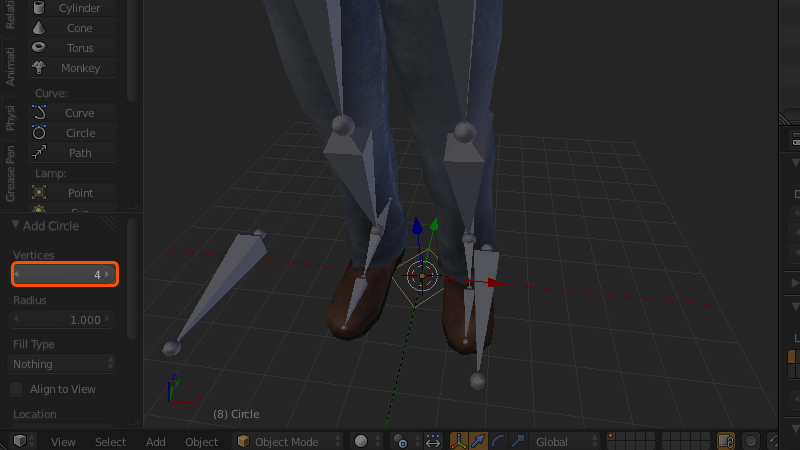 To create the shoulder controls we'll do pretty much the same thing, but this time will adjust the look of the curve slightly. So drop in a new Circle and change the number of vertices to 4 and change the name to Anim_Shoulder_L or whatever you like. 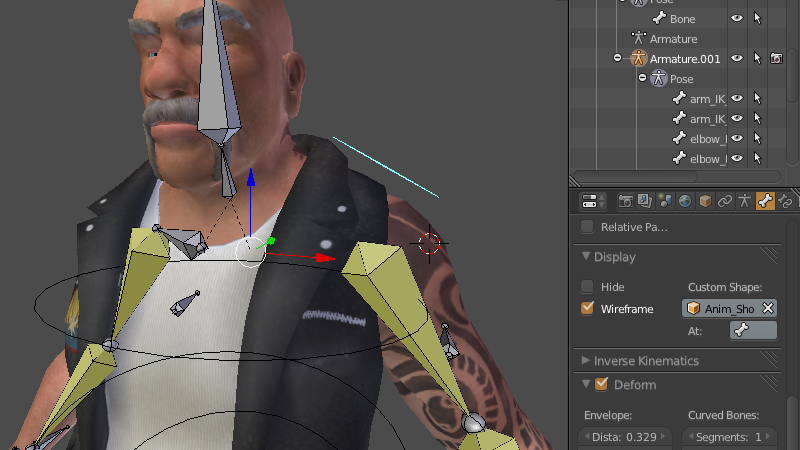 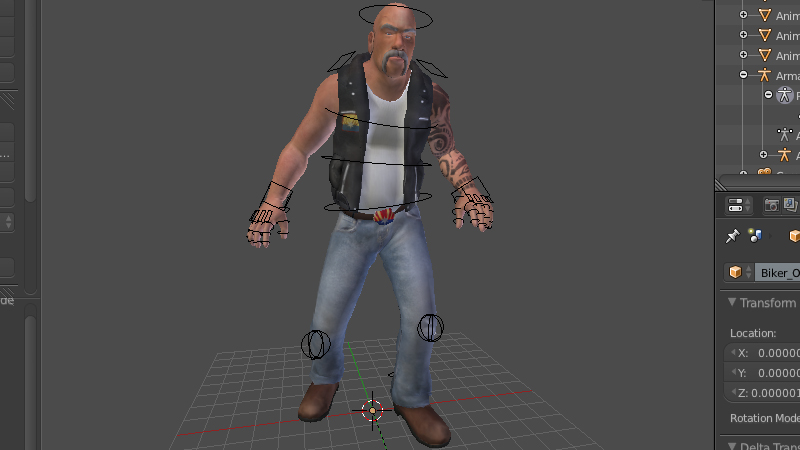 I went ahead and continued creating the rest of the control curves. You should have an understanding of the process at this point to complete the rest on your own. Once you complete a few you'll get into a rhythm and it will be come an easy process. For each bone you'll go through the same process, creating a circle naming it, and selecting the bone you wanted it to be applied to and changing the custom shape for the bone to the new circle you created. Remember that you're basically just changing the look of the bone to the curve, it's not like similar 3D applications where you constrain a control curve to the bone, in Blender it's a bit different, imagine the curve you're created as a shape the bone references. You can get a little creative with the shapes of the curves, as you can see from the completed rig I dropped in a sphere and just snapped points along the sphere to create control curves for the knees and elbows to be easier to see and grab. Now you should have a basic understanding of the process for creating character rigs in Blender. While this is a pretty basic rig, we'll be diving deeper into more advanced rigging concepts in later articles.