Getting Comfortable with the Houdini 14 UI

With the recent release of Houdini 14, there's no better time to get into this robust 3D application. While Houdini is a full service 3D program allowing you to render, model, animate and more, its bread and butter is in the dynamics engine. Houdini has become one of the go-to apps for creating jaw-dropping simulations, from vast oceans to crumbling buildings. If you’re serious about creating dynamic simulations, you’ll want to have a strong understanding of Houdini. In this article, we’re going to spend some time just scratching the service of what Houdini has to offer by diving into the program’s UI and getting familiar with the basics. After this introductory article, I highly recommend checking out our Introduction to Collisions in Houdini tutorial to begin diving into the ‘meat’ of the application. If you don’t have Houdini 14 yet you can jump over to sidefx.com and download Houdini Apprentice which is a completely free version of Houdini FX that can be used for non-commercial projects and is perfect for learning purposes.

As with any 3D application, the first time you fire it up you’re bound to get a little anxiety. So many menus, buttons and so many potential options can make anybody’s head spin. Of course, if you have prior experience with another 3D program then it’s definitely easier to jump in, but even then, learning a new application always brings new challenges. 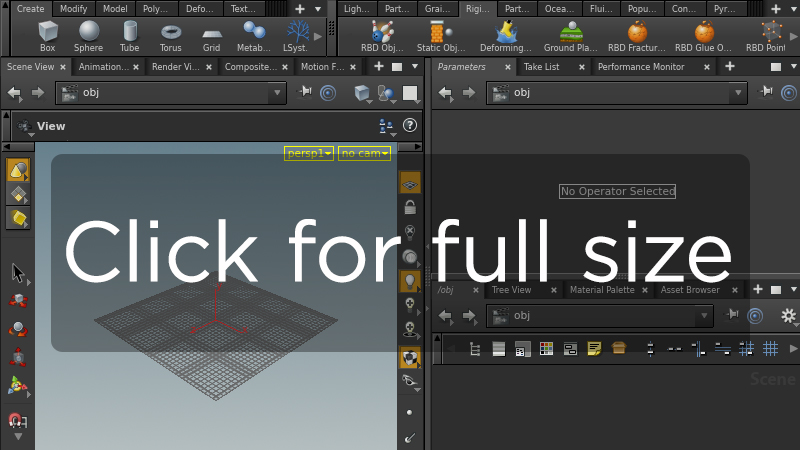 When you first open Houdini 14 this is what you’ll see and, if you’ve used any 3D application before, it probably doesn’t really seem out of the ordinary. You have the 3D viewport in the middle where your creations will be visible, and all the various buttons and tools around the viewport. Now, if you’ve never used a 3D application before this interface will probably seem very foreign to you. To make it a little easier to understand let’s break down the UI and go over some of the various menus and tools. There are really four key areas of the UI where you’ll find all the tools you’ll ever need, let’s start with the basics and work our way through them. 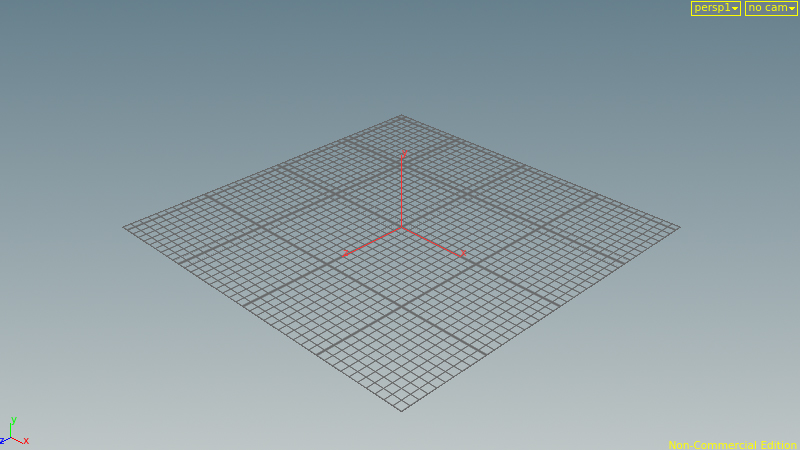 In the middle of the Houdini interface, you have the 3D viewport. As mentioned previously this is where you’ll navigate, create models, and see your dynamics play out. Basically, this is where all of your pretty creations will be displayed. I assume you have some knowledge of other 3D apps so I won’t go into too much detail here. Navigation within the viewport is pretty simple. By holding down the left mouse button (LMB) and dragging around you’ll begin to orbit the viewport. If you hold down the middle mouse button (MMB) you can pan around the viewport by moving your mouse around. Clicking the right mouse button (RMB) and dragging in and out will dolly the view in and out. There’s also some more advanced navigation hotkeys that’ll be handy for you to know. If you hold down Ctrl+Alt+RMB you’ll zoom in and out. At first, this may look like you’re dollying the viewport, but you are truly zooming in and out just like you would with your camera. If you hold Ctrl+LMB you’ll tilt the viewport, which can be extremely disorienting if you’re not expecting it. In most cases, you’ll be fine sticking with the basic navigation of orbiting, panning and dollying.

At the top of the Scene View, you’ll find the shelves. These shelves give you quick access to some of the most used things in Houdini. On the left side, you’ll have the various shelves for things like polygon primitives, rigging, texturing, and more. On the right, you have all the various shelves for dynamics in Houdini, this is where you’ll likely spend most of your time in. For example, the Particles shelf will allow you to create various particle parameters like fireworks, particle emitters, and so on. 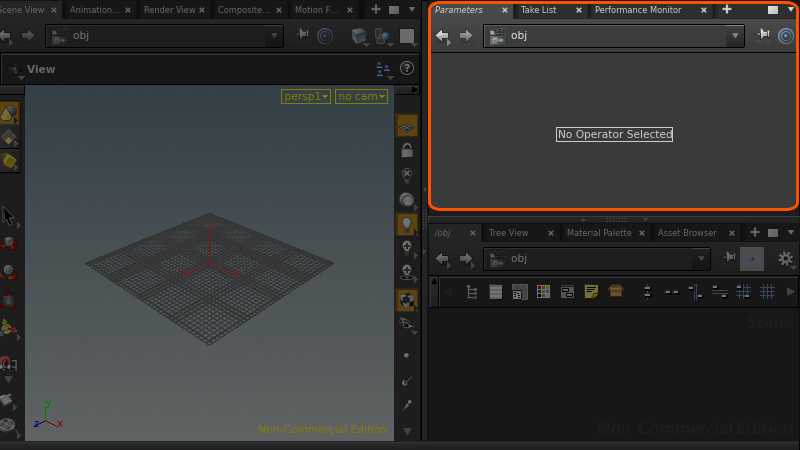 To the bottom right are two panes where you’ll likely spend much of your time. The first is the Parameters pane. It’ll be blank when you first open Houdini, but we’ll dive deeper into this pane later on in this article. For now, just know when you create a new object, the various parameters of the object such as things like translation values, rotation, pivot, etc. are displayed in this Parameters pane. This is also where some of the key parameters for your dynamics will be editable. 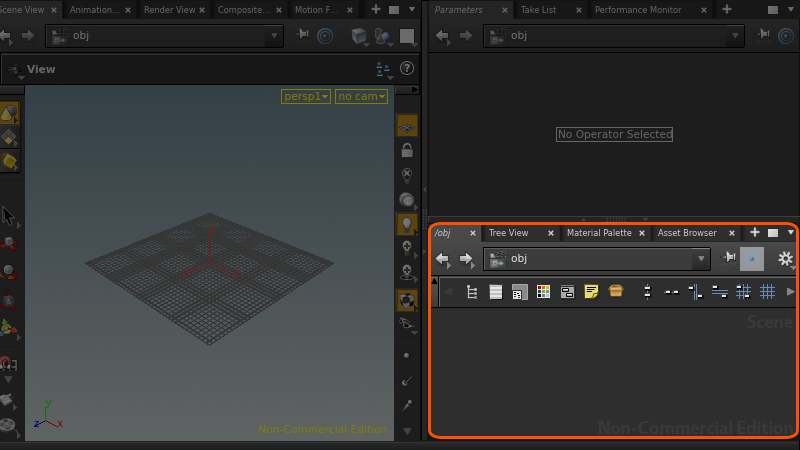 Below the Parameters pane is the Network pane. This a key area in Houdini, and one of the things that makes it unique. Much of what you’ll do in Houdini revolves around nodes that can be tweaked, adjusted, and stacked in various ways to get the results you want. As you’re working with dynamics in Houdini the Parameters pane and Network pane is where you’ll be spending the majority of your time. Before we dive deeper into these two panes, though, let’s go over some of the other areas of the UI.

Above the Scene View you can see a list of a view different tabs, as you can see in the screenshot above. By default, you’re in the Scene View, which is the 3D viewport, but you can also go into the Animation Editor, for example, by selecting the tab. This changes the viewport away from the Scene View and into a curve editor. You also have things like the Render View, Composite View, Motion FX View, and so on. 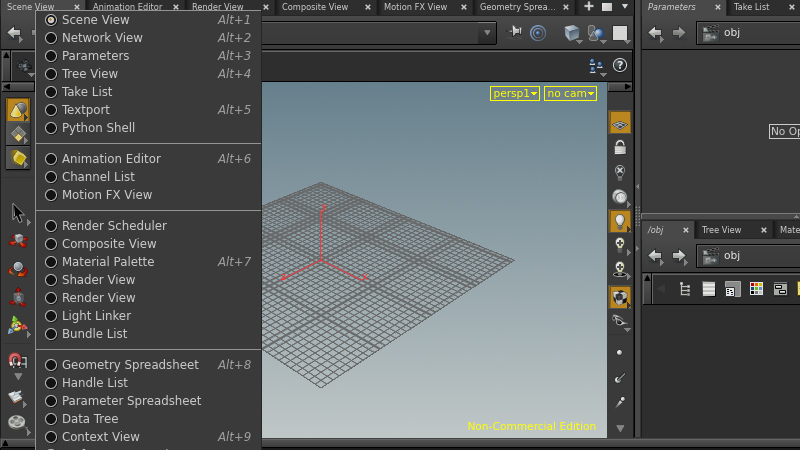 If you don’t use the default views, you can customize the tabs by right-clicking on any one of them to change them to a different one. For instance, you can change the Animation View to the Shader View and so on. You can also select the little plus icon on the very end to add in a brand new tab if the default amount isn’t enough for your needs.

To the left of the 3D viewport is a toolbar that contains a lot of the same things you’d find in any other 3D application such as move, scale and rotate. You can toggle the different rotation translation and scale gizmos as well as adjust the snapping options.

On the right side of the viewport you have another toolbar that lets you do some basic things like toggle the grid on and off, change the lighting options from normal to off, as well as enable high quality lighting in the viewport. You also have options to turn on various object level visibility. For example, you can display the points of the object, as well as the object’s normals among other things.

Now that we’ve gone over some of the basics of Houdini’s UI, let’s go a little bit deeper into the Network pane and the Parameters pane. The best way to get more comfortable with these two areas is to create a very basic simulation. 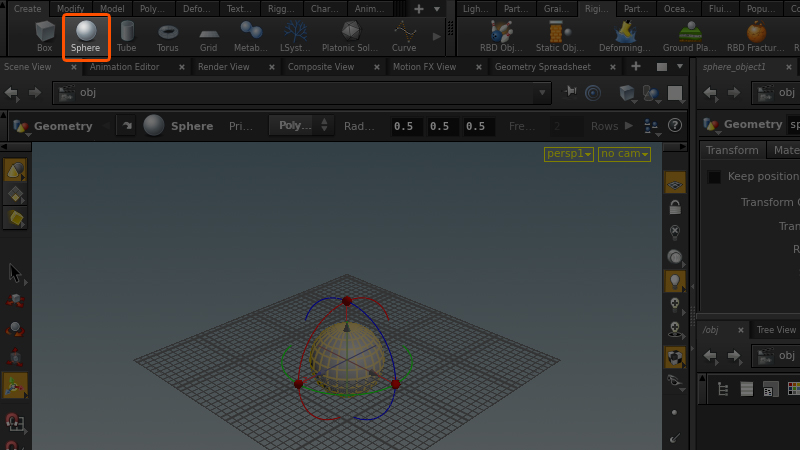 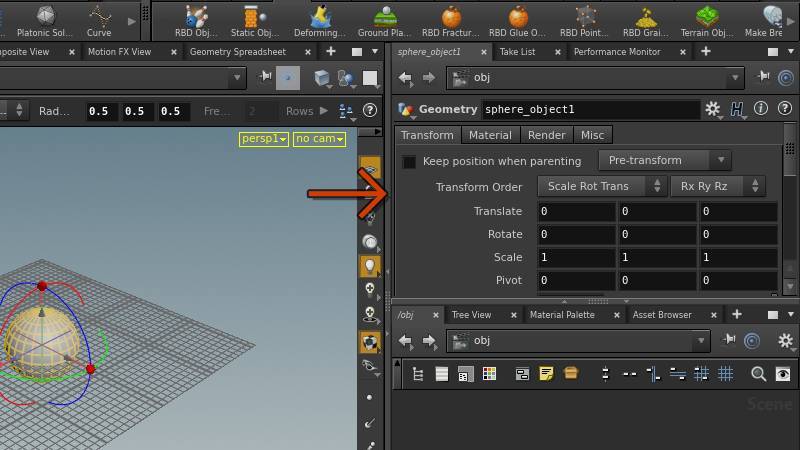 Immediately you’ll see a lot of new parameters have become visible inside the Parameters pane. At the top we have our object’s name, which is sphere_object1. Below that we have the various transform values. 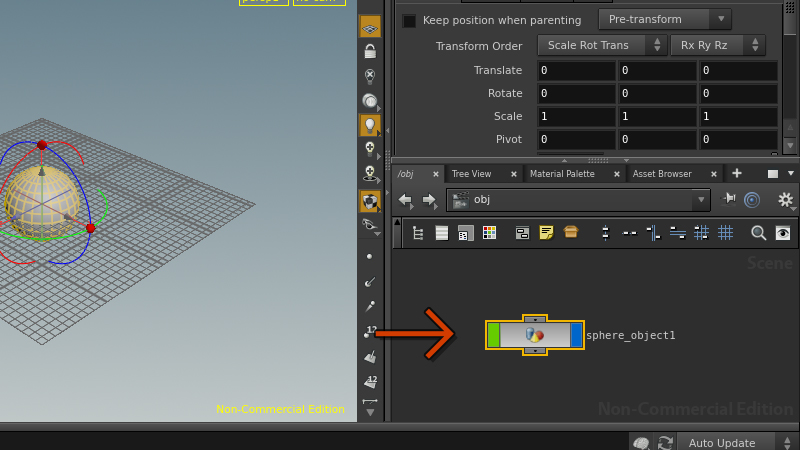 Now that we have a sphere created let’s setup our first dynamics simulation, something very simple so that we can get an understanding of the Network pane and how to navigate within it. 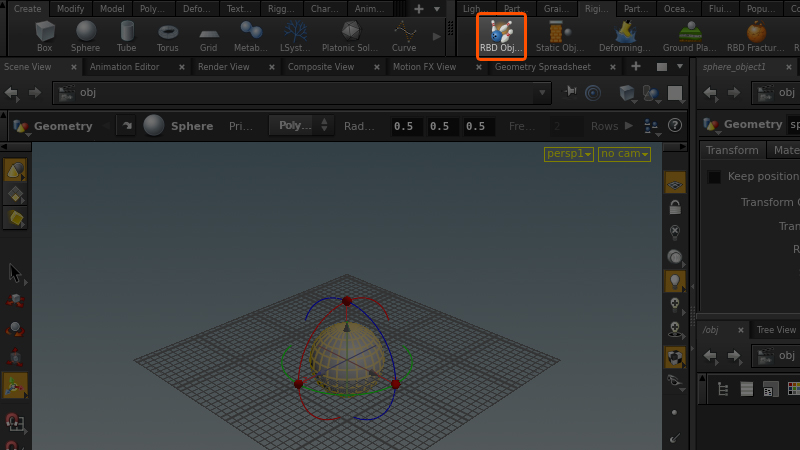 Under the dynamics shelf select Rigid Bodies and choose RBD Object. Make sure your sphere is selected when you do this. 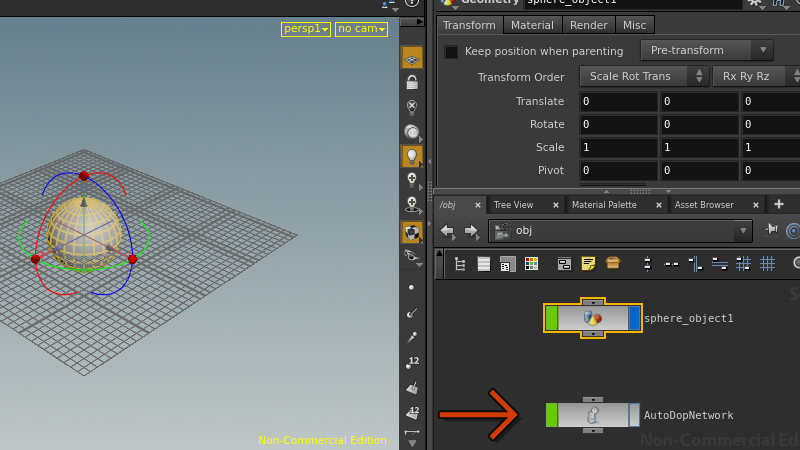 You should now see a brand new node dropped into the Network pane. This is the AutoDopNetwork node. Inside this node is where all of the dynamics will live. You may notice that the AutoDopNetwork node may have been created off to the side and away from the sphere_object1 node. If you want to keep your Network pane tidy use the keyboard shortcut “L” to line all your nodes back up. It’s always a good idea to stay as organized as possible. 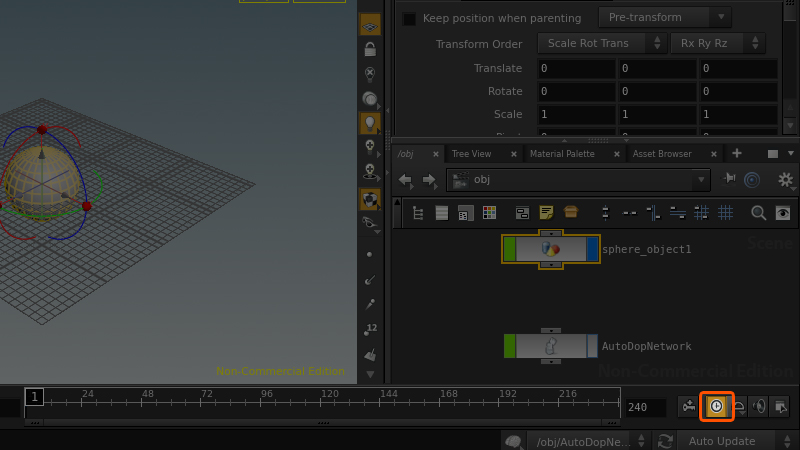 If you press Play on the timeline you should see your sphere drop into endless 3D space. With the default settings, the sphere will seems to be dropping extremely fast. The reason for that is because the animation isn’t playing back at real-time 24 frames per second. You can enable this by selecting the Real-Time toggle button to the right of the timeline. Now the simulation should look more realistic. Before we do anything else, let’s go back up to the dynamics shelf and under Rigid Bodies choose Ground Plane. This drops in some geometry we can use as a floor for the sphere to interact with. Keep in mind that while it may look like the ground plane only covers a small area in the Scene View, it’s actually an infinite ground plane so you’re just seeing the preview. When you play back the simulation now the sphere should come into contact with the ground plane and bounce a few times. 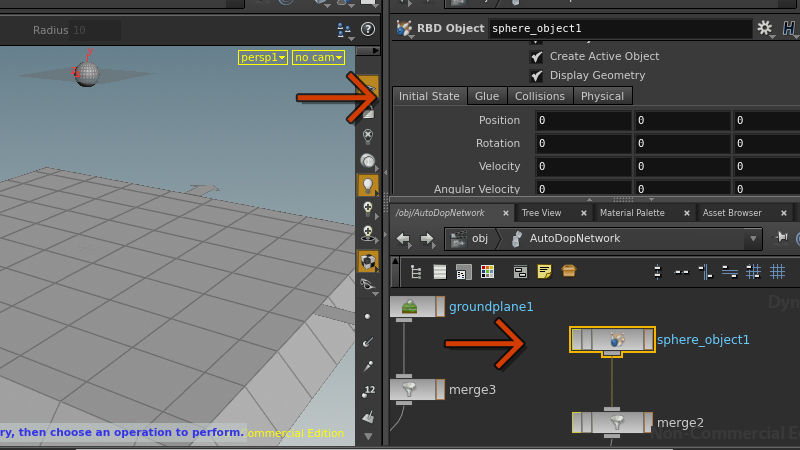 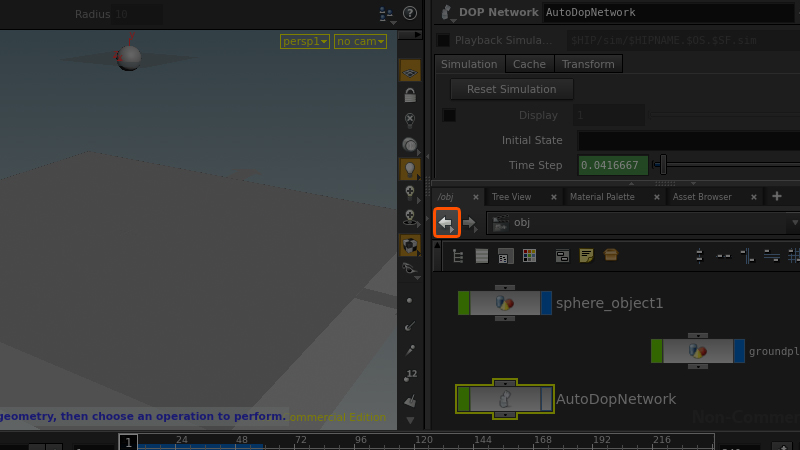 To go back to the scene level, press the back arrow icon in the Network pane.   As you can see, the Parameters pane and Network pane are two of the areas you’ll be spending most of your time in when working with dynamics in Houdini. Be sure to check out the Introduction to Collisions in Houdini tutorial to get a more in-depth at how to work with simulations inside of this powerful application.