Key Methods for Blocking in a Dialogue Performance Animation

As animators, it is our job to create convincing character performances, to create something the audience can engage with, and believe in. You want the audience to forget that these are just 3D models; you want them to truly feel like these are thinking characters with a personality, not just puppets you are manipulating. In order to be successful at this you need to know who these characters are, how they think and how they act. Before you can convince the audience that these are living characters, you must convince yourself. Often the most daunting task for an animator is the acting shot, which is a combination of great body mechanics and a character performance that feels genuine. When you think about it, actors have it pretty easy. Sure, they have to ensure they are acting in a way that feels believable, and make sure they embody the character they are portraying, but that's it. Animators on the other hand not only have to create convincing and non-cliché acting choices but they also have to think about body mechanics, and how we move in the real world. Every single action that a character is taking on screen has been thought of and consciously put in by the animator. The unconscious tapping of a foot on a character to show nervousness has been consciously added in by the animator. Nothing is ever put in without a specific reason. In this article, we are going to walk you through the various methods for blocking in an acting shot. When it comes to a shot like this, sometimes the most difficult part is the early stages, so this should give you a strong understanding of how you can approach these animations in the future. The first step to animating an acting shot is to find some audio to use. Now, of course, not all acting shots include dialogue, a big part of animation is pantomime acting as well, showing emotions without any dialogue. This of course presents its own sets of challenges. You can go about getting great audio a few ways. The first way, and probably best way is to search online. Now, you could just record some audio yourself and animate to that, but you really want to find excellent audio that carries a lot of believability and emotion. There are a lot of great websites out there that feature short dialogue clips from just about every movie imaginable. Although I highly recommend not using a clip from an animated movie, because you don't want to have any outside influences, you want to create a completely unique shot for that particular audio. A good place to find audio is at the internet archives, which have countless old time radio shows from the 30s and 40s. These of course fall under the public domain license so they are completely free to use. At the same website archive.org you can also find a lot of short films and movies that you can get audio from which also fall under public domain. 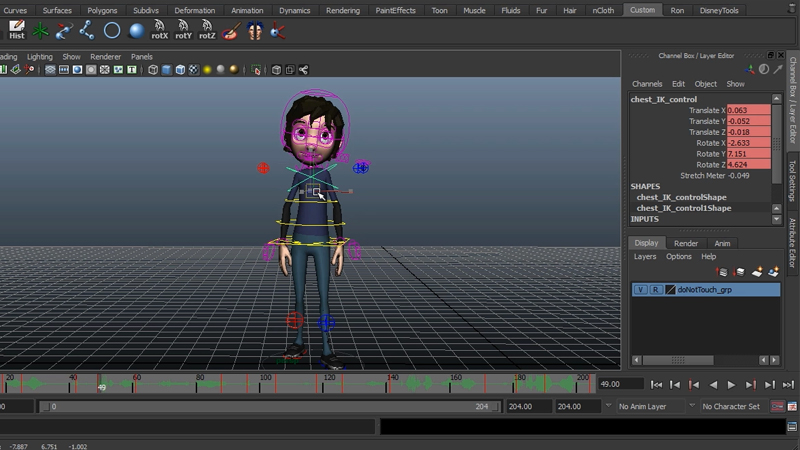 It's also important to try and keep your shot as short as possible, you don't want to get in over your head and try and take on a 20 second shot. Instead, find something around five-ten seconds. It may sound excessively short, but once you start animating you'll realize five seconds starts to feel more like five minutes. There are a few different ways you can go about blocking in an acting shot, however, no matter what method you choose the most important thing is to have a strong idea of the character performance. You want to hit those story telling poses first and foremost, these are the most important acting beats. You also want to ensure that you're not over acting, which can be extremely easy to do. When shooting video reference it's very tempting to really over act the shot. As you know from watching movies, over acting can be a sure sign of an inexperienced actor. Often times, simpler is better. This means hitting thirty different poses in a six second shot is not the best route to take. Instead, you want to pick two to three main poses throughout a shot, and have your character perform within those main story telling poses. Of course, this is not a must follow formula, but rather a good rule of thumb. It really depends on the style of the animation, and the particular shot. In a film like Cloudy with a Chance of Meatballs, extremely exaggerated acting is part of what makes the movie so fun. When you have everything in order, your planning, video reference, etc., it's time to begin blocking in your shot. This is where it can start to get daunting, because you're basically staring at an empty canvas, of course, your planning should give you a good idea where to begin, but even then, opening up the 3D application can be a whole different monster. 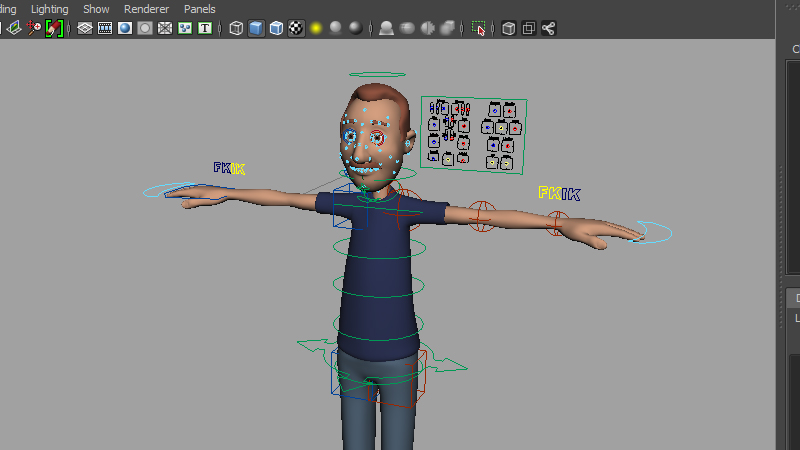 You likely have your preferred method of blocking, whether it's starting in stepped tangents, or spline. Maybe you're still experimenting with the technique that works best for you. Something I've found out is that it can be good to deviate away from your preferred method, depending on the shot. The shot you're animating can help you determine if you should start in stepped tangents, or spline. In the past, I would block my shots with stepped tangents 90% of the time. However, recently I've switched to starting my shots in spline right out of the gate, specifically with more subtle acting shots. Now, I'm not saying you should do this as well, but don't feel that every single shot you do has to be blocked in the same way. A very common reason why animators avoid starting in spline tangents is because it can be hard to focus on the story telling poses. The computer is interpolating between each pose, and at the beginning this can look extremely ugly, and it can be very easy to focus on getting this to look correct rather than ensuring your poses are clear. The fact is, you really shouldn't care how the animation is looking at this stage, try to ignore the interpolation altogether and focus on the posing. It's a good idea to just jump between each keyframe rather than playing the animation out this early on in the blocking stage. We've all been there before when starting in stepped tangents. The animation is looking perfect! However, once you switch to splines everything just falls apart and you have to spend a majority of your time fixing things to make them look good in spline mode. One of the reasons for this is in the timing, and the lack of key poses. In stepped tangents, everything is very snappy, because while you may have a key pose at frame 20 and the next at frame 30 it's still going to display as a pose change over one frame, that's how stepped tangents work. Suddenly when you switch to splines you see the ten frames in between, and not just one frame. Because of this, your animation doesn't look anything like it did before. It lost that snappiness that was there previously. With any animation you do, you are eventually going to have to convert it to splines. I've found that simply starting in spline right out of the gate can actually speed up the process. You're also able to see right away accurately what you're timing looks like. Now, you don't need to pay attention to the horrible job the computer does at interpolating between each keypose, you just need to focus on the timing itself. This will all be ironed out when you start to add in betweens and breakdowns. 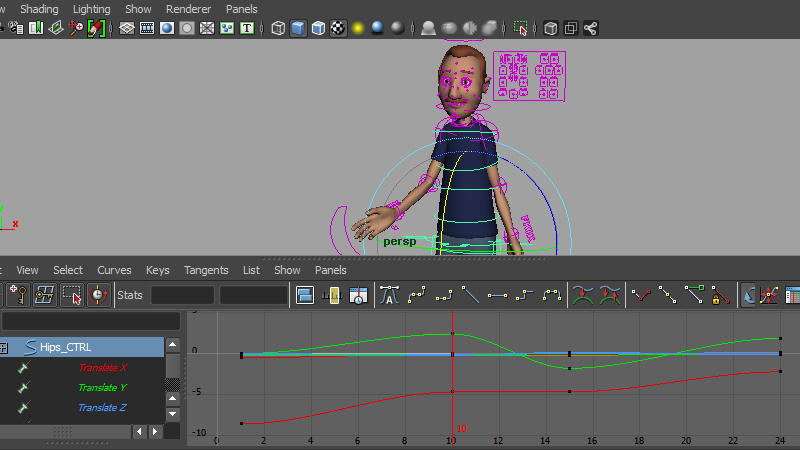 Of course, starting in spline mode doesn't work for everything, but I've found with dialogue shots where there is an emphasis on acting it's a lot easier to start with splines and see how the timing and interpolation is looking early on. With a more body mechanics-heavy shot starting in stepped may be the more logical option. It's important to not feel constrained by one particular method, do what works best for that particular shot. When blocking in a shot you don't really need to be concerned at all about the timing. You just wanted to establish the story telling poses, and make sure those are as clear as possible. Since the timing isn't an issue at this point try creating each pose in order on the timeline, frame 1-2-3-4-5, etc, each frame has a key pose. You can use the period and comma keys on the keyboard (Maya) to flip through the poses to see how one pose transitions from the next, the timing at this point doesn't matter. From there you can begin to time out the animation, remember not to worry about the interpolation, at this point its going to appear very "floaty" because the lack of inbetweens and breakdowns. You still should get a good idea of the timing and that's the most important thing at this stage. This method is more of a layered approach, each pass you do on the animation will begin to flesh it out a little at a time. Before you ever start adding in breakdowns, you want to make sure that your key poses and timing are where they need to be. You also need to spend the time to make sure that each key pose is fully fleshed out. It can be easy to think of blocking as an extremely rough version of the final animation, which it is. But it's important to give each pose the time it needs to be right, this means tweaking even the fingers. While blocking is the first version of the animation you don't want to just throw some poses in there and call it good. 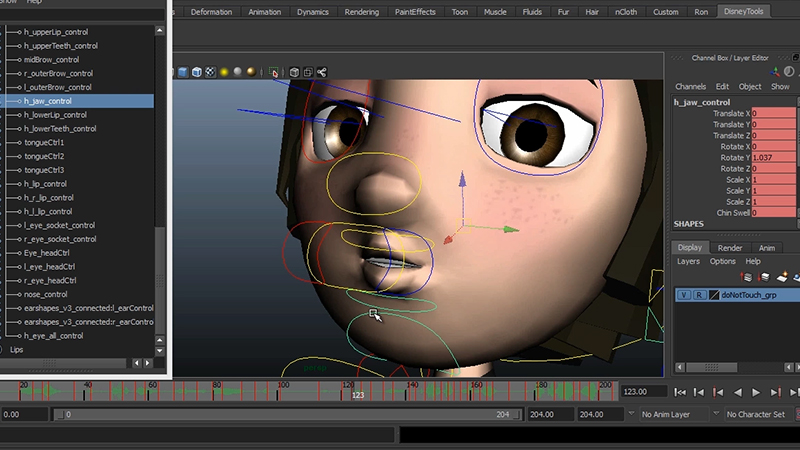 Another important thing to keep in mind is that you really don't need to worry about the facial animation at this point. When it comes to dialogue shots the facial animation is something that can be done last, consider it icing on the cake, the thing that takes your shot over the top. Now, you can block in some of the main facial expressions throughout the shot but there is no need to go in there and add the small details. You should have a stronger understanding of the methods you can take for blocking in a dialogue shot. Remember you don't have to stick with one technique, because depending on the animation starting in stepped mode might work better than splines in the beginning and vise versa.