Blender is capable of just about anything you throw its way, whether it's animation, modeling, rendering, compositing, etc. In this article, we're going to take a look at some of Blender's modeling tools and create a bow and arrow from start to finish. We'll block the bow in using an edge modeling workflow, which is great for quickly establishing the shape, and then we'll go in and add more detail. Once we've got the bow looking how we want, the next step will be to use a sculpting application to begin editing the high-res mesh. If you're brand new to Blender, I recommend checking out the Introduction to Modeling in Blender tutorial and get familiar with the user interface in Blender's UI article.

Step 1: Get Some Reference

Approaching a model without reference not only makes it more difficult to achieve the model, it also can cause the quality of the model to suffer. Having reference to basically trace over in the 3D application speeds up the modeling process significantly, so spend the time needed to find the bow that you want to create. For this, I just did a quick Google search for "Bow". Who knew that if you search just "Bow" you're bound to get a mismatch of bows and bowties... Since I wasn't modeling a bowtie, I wanted to narrow my search down by searching for "Bow Weapon". You're bound to find some really great reference you can use just in the first few images that pop up. Once you've found some reference that you think will work for you, the next step is to bring it into Blender. Luckily, this is extremely easy to do. When in Blender select the little "+" icon in the top right corner of the viewport. This will open up some various parameters for things like shading, display, and background images, which is what we want. Check the background images check box, navigate to where you saved off your reference, and in the Axis change this to "Right" view. There you go! You've now got your reference in Blender and you're ready to begin modeling.

Step 2: Blocking in the Bow

With your reference brought in, you can now start modeling the bow. For this I used an edge modeling workflow, starting with a simple plane, rotating it 90 degrees, and grabbing one edge and extruding it to create the base shape for the bow. 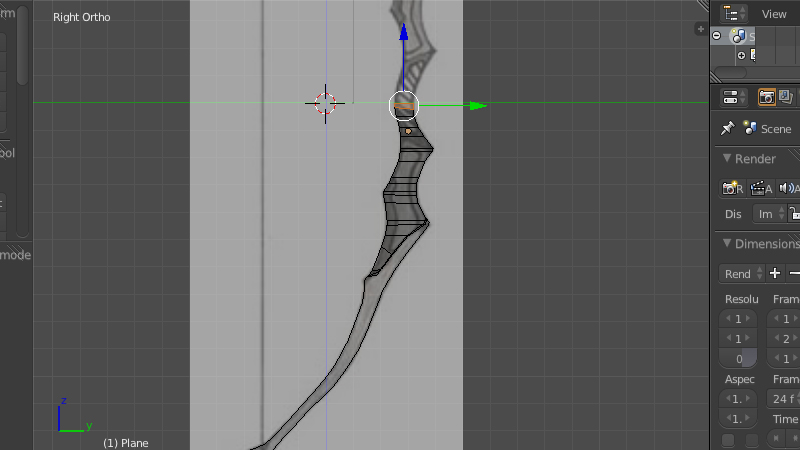 I separated the bow into just two different pieces of geometry. I created one piece for the area where the handle is, and another piece for the rest of the bow. In the reference image, it looks like there is a small ridge or accent here, so I decided this could be part of the bow that will be a little be wider. 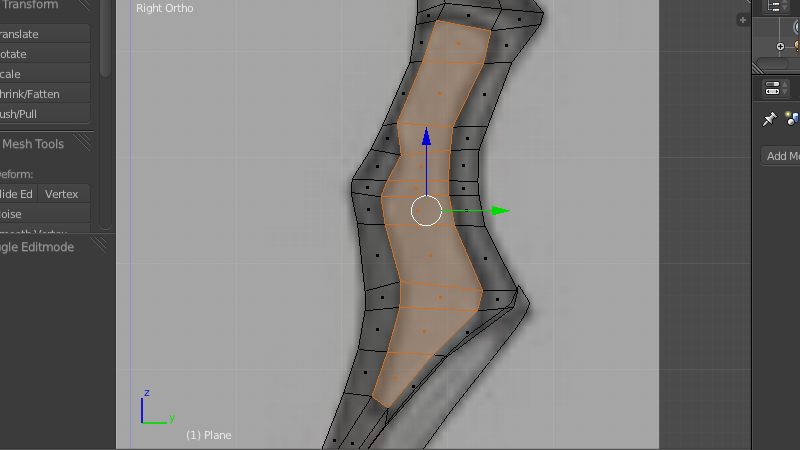 In the reference, there is also an area near the handle that extrudes out from the side of the bow. You could create this one of two ways. The first is by just creating a completely new piece of geometry which could be placed in that spot. In this case, I added two edge loops, and moved the points to match the shape of the area on the bow. Later on, I can just extrude this directly from the bow, so it will be part of the mesh. It's a lot easier to separate the most important areas on the model that you know are going to need to be a different shape or width than the rest of the model. I could have tried to keep the bow one entire mesh but that would be unnecessarily difficult. Remember, you don't really need to stick with any particular modeling method throughout the entire process, use whatever method works best for that particular area. For instance, there could be certain areas on the bow that you're creating that would make more sense if you just dropped in a cylinder or cube. It just depends on how you like to work, and what makes the most sense for your model. 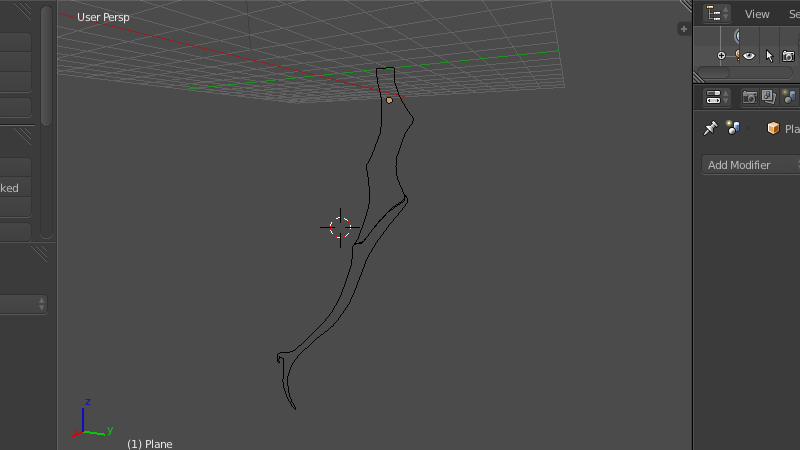 I also only modeled the bottom half of the bow, that way I can just mirror it and it will be symmetrical and I only have to model half of the bow. There is also no reason to mirror the mesh until very later on. Once you begin adding in very fine details with sculpting you don't need to mirror it, because you don't want every single detail on the bow to be symmetrical. 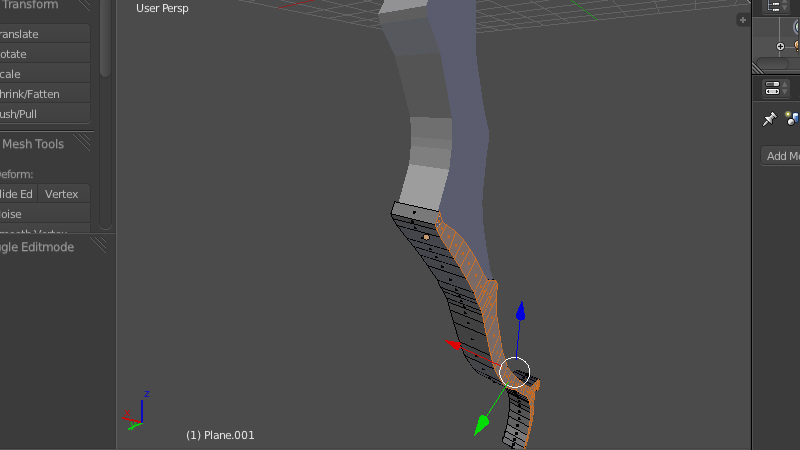 Now that we have the basic shape of the bow blocked in, its time to begin adding thickness to the bow. You can do this very easily by grabbing all the faces and extruding them out. Since I only have a side view as reference, I just had to "guesstimate" on how thick each area should be. 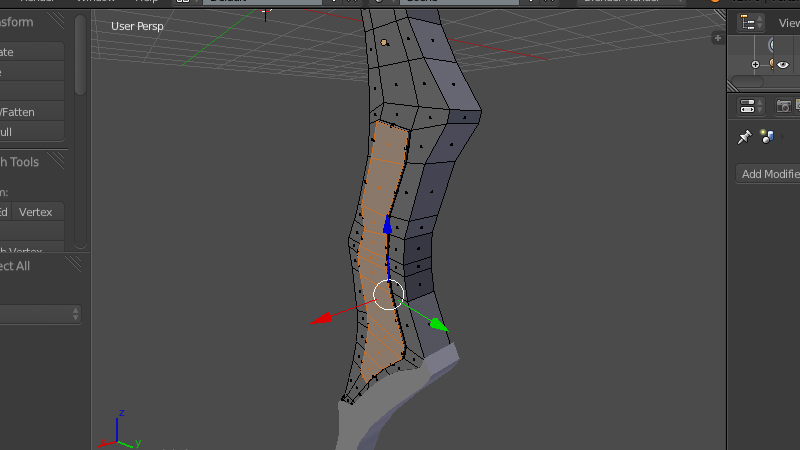 So now that the bow has some thickness to it we can duplicate it for the top portion of the bow. Up until this point, we've just had half a bow, now it's time to create the rest. 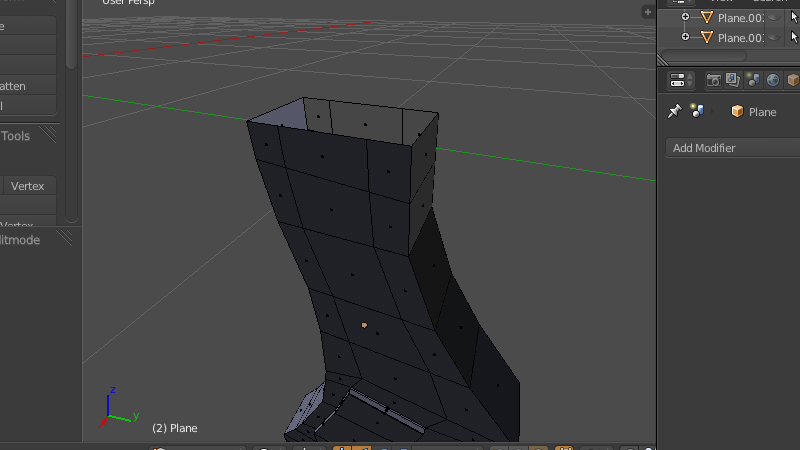 First select the faces at the very top of the bow, where the handle is, and delete them. We are going to be joining both sections of the bow when its duplicated so we need to have these faces deleted. 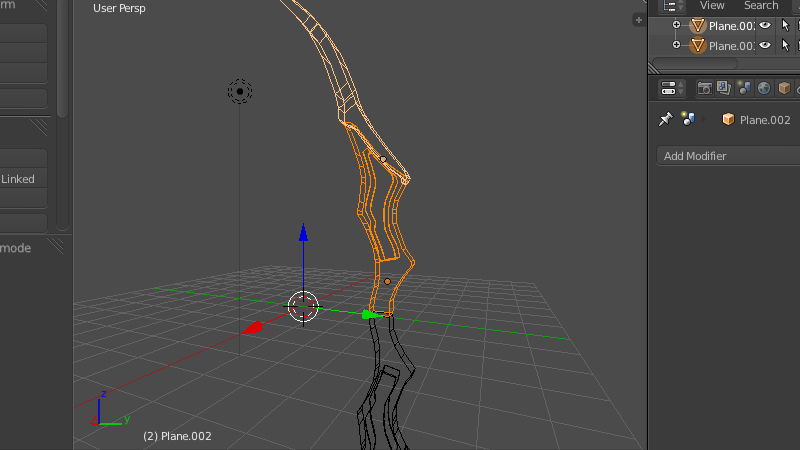 To create the top part of the bow all we have to do is select both pieces of geometry, and press Shift+D to create a duplicate. With the duplicate selected press "R" to rotate it, and "Y" to snap it to the Y axis, and all you have to is rotate it 90 degrees. 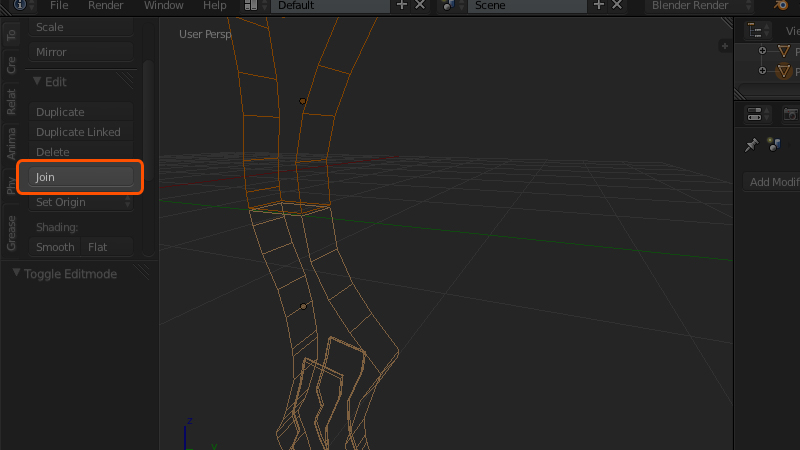 Position it where it's just above the other half of the bow, select both pieces of geometry that make up the handle area, and under Tools select Join. 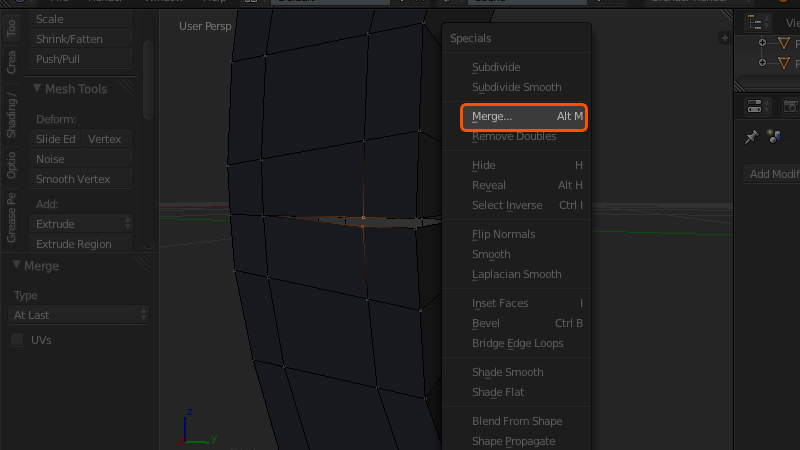 Go into Edit Mode, select the vertices opposite each other, and merge them together by pressing "W" on your keyboard and selecting "Merge" to join these areas. 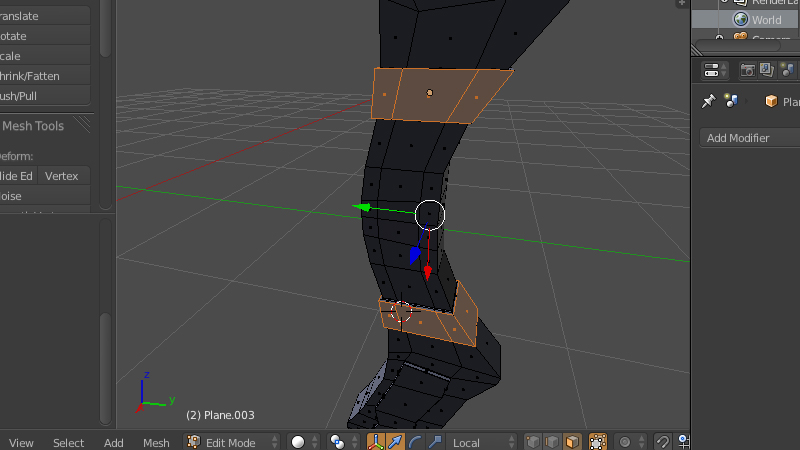 Based on the reference I'm using, there isn't really anything where the hand should go. There looks to be some grips in that area, but it's not as detailed as I would like it to be. Since reference is really just a guide, you can use your creative liberties to add things that you think will add more interest and appeal to the model. I've gone ahead and selected a strip of faces on both the top and bottom of the handle area, and extruded them out to create an indication of where the grip area ends and begins. 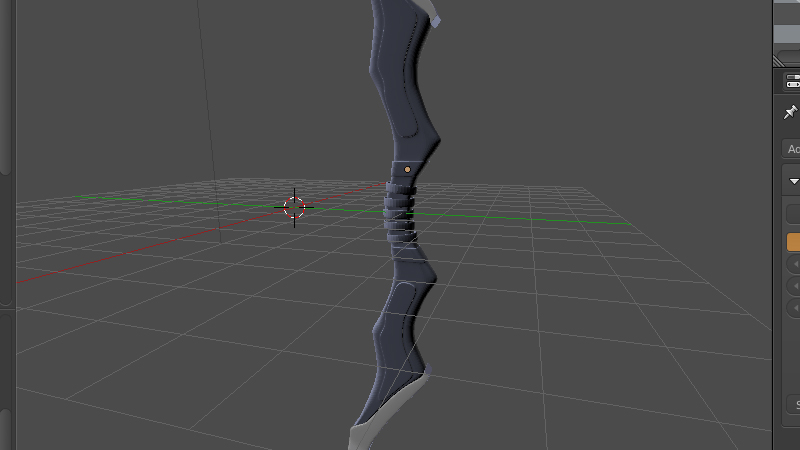 The last thing to do before we can begin to add more detail to the bow is to add in the hand grips. For this I'm just going to create strips of cloth so you can drop in a Torus, and lower the resolution to somewhere around 8 and scale it into position around the hand area. Once you're happy with the size, duplicate it a few times to create the grip. Of course, they don't look like much now, but later on we'll sculpt in more details to make them look more like cloth pieces. I've also applied a Subdivision Surface modifier to all the pieces of geometry to smooth them out and get a better idea of what it will look like at a higher resolution.

Now that we have the basic structure of the bow created we can begin sculpting in the finer details. You can do this directly in Blender or bring it into an external sculpting application. I brought the mesh into Mudbox to add the details. 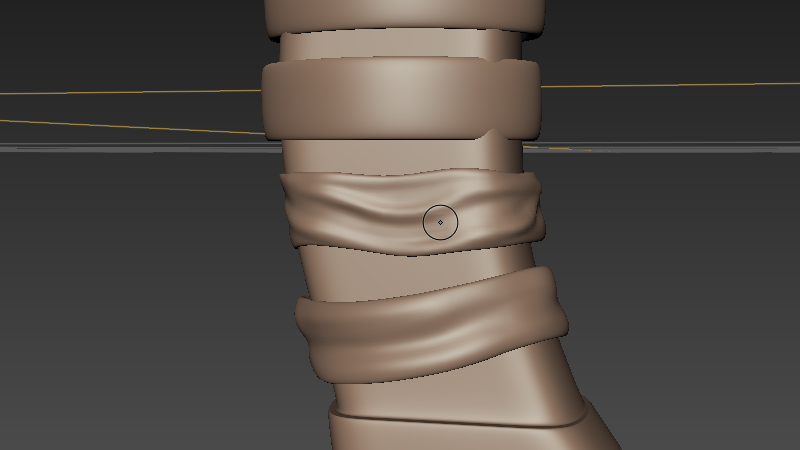 You can see I started adjusting the cloth straps around the hand grip to make them appear more cloth like rather than just a strip of polygons. I used the basic sculpt brush in Mudbox to create the folds on the cloth. 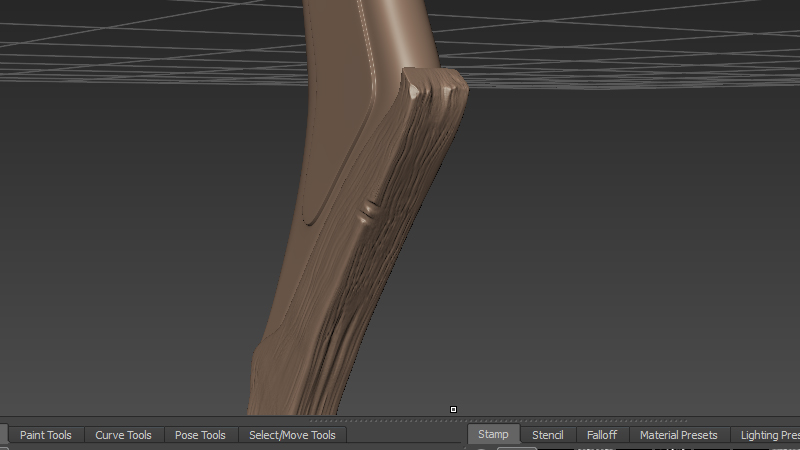 To create the wood look for the bow I used a combination of various brushes like the knife brush, wax, scrape, and sculpt, along with a few stamps to give it an older and worn out look. You can really have a lot of fun with this and create as much detail as you want. Depending on what you're creating this for though, you could skip this step and just go straight into texturing. However, spending time to sculpt in details will allow you to create a great normal map that you can use along with your textures. If you want to learn more about Blender and the power of this free 3D application check out our growing library of Blender tutorials.