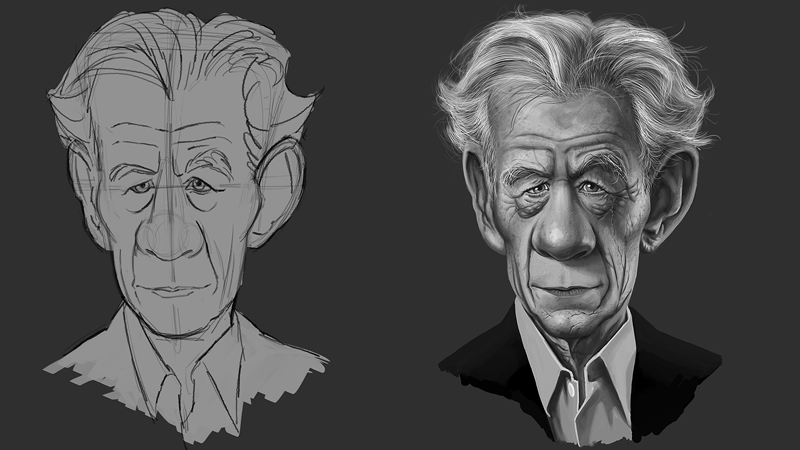 A caricature captures the essence of a person in an over the top way by calling attention to and emphasizing certain physical features. You can find examples of caricatures in all forms of media. Often times you'll see caricatures of movie stars in entertainment magazines or animated shows. Caricatures of politicians are commonly used in editorial cartoons. Depending on the design and rendering, a caricature can be presented in a manner that comes across insulting or complimentary. Regardless of the intent behind a caricature's design, usually a humorous response is sought. Creating an effective caricature that captures the essence of the subject it's been modeled after can be challenging, so here's five concepts to consider when designing a caricature.

People come in all shapes and sizes and that's what makes every individual unique and special. If this wasn't the case then the world would be a really boring place. There'd be no variety or culture amongst society. The degree to which you exaggerate different facial and body features will define the intent behind your caricature design and direct the viewer's focus around those features. This is where you want to spend some time studying the features of the person you plan to create a caricature of. Ask yourself what features really stand out to you. It can be easy to try and capitalize on every single facial and body feature. However, focusing on the top two or three defining features will allow you to begin to capture the core attributes of a person. Does the person have a large chin, bushy eyebrows, a giant smile, or a tiny nose? These could be the dominant features that stand out. From here you can continue to build on the caricature with additional exaggerated features that help support those primary attributes. Exaggeration can involve making a feature larger or smaller in a variety of ways. A common type of exaggeration that we see with full body caricatures involves making the head much larger than the body. This is great especially if most of the features you plan to exaggerate are on the face.

In addition to exaggerating specific facial and body features you also want to simplify others. Some features could distract from those you want to emphasize. Sometimes leaving out certain lines in the face or simplifying the detail of the hair can help a lot. Naturally, every caricature design is different and the degree to which you simplify certain features can vary depending on the level of rendering and the type of style that you plan to use for your caricature. An example of simplification might involve not including the eyelashes in the design, especially if they're not a feature that even remotely stands out on the person. Just as you'd study a person for features to exaggerate, you'll also want to look for features to minimize. This will help emphasize those exaggerated features a lot more and allow the final rendition of the caricature to read well visually. 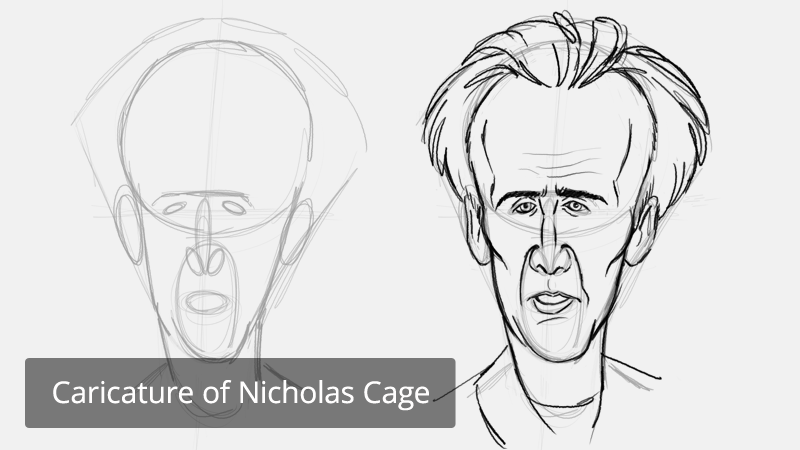 Once you've decided what features you want to exaggerate and simplify, it comes down to how you want to construct those features so they'll translate visually in an effective way. If the person has what appears to be a strong and rather large chin then perhaps you might want to start by blocking in an overly large square or boxy shape for that feature. Simple shapes help lay the foundation for the features you want to draw emphasis to. By capturing features in the form of simple shapes, you can begin to experiment with how large or even small you want to make them before layering on any additional details to define the form.

Another key component of a fun caricature design is the spatial relationship between features. Just as you've studied a person's face for features that stand out to you to be exaggerated either larger or smaller, you should also explore the placement of those features. Do the eyes appear to be really close together? Or does the mouth sit really low on the face? The amount of real-estate that certain features take up between each other can sometimes create an illusion how the space between them appears to be. For example, an old man with a receding hair line might appear to have a larger forehead. A person with a smaller bridge to their nose might appear to have eyes that sit farther apart. 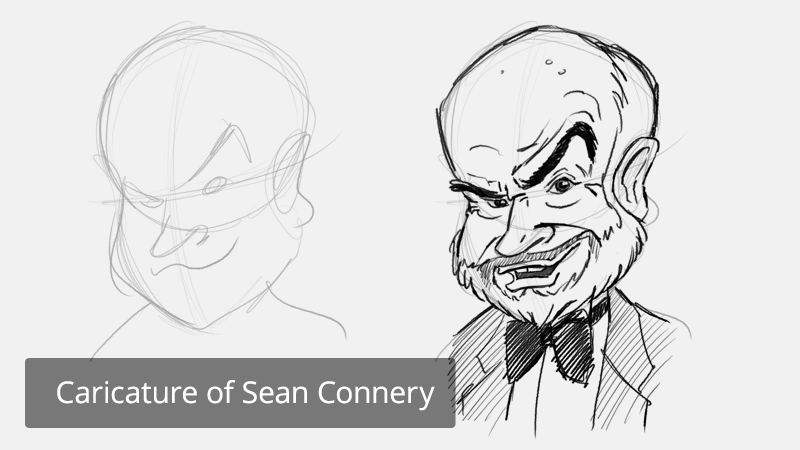 Finding a visual balance between features that you have exaggerated, simplified, and repositioned will help you create a caricature that is both fun and appealing. A caricature that has appeal will resonate in an audience's mind. Study and experiment with the relationships between the major features that you've exaggerated. If they are all the same size and too close together then they're all going to compete for attention, ultimately canceling one another out. This hinders the impact that the caricature could have on it's audience. In the end, visual contrast supports the composition you have crafted through the exaggeration, simplification, and placement of various features and helps create a sense of visual harmony.   As you explore these five tips, it's key to remember that there is no one way to design a caricature of someone. Explore sketching multiple designs for your caricature and try various combinations by exaggerating, simplifying, and placing facial and body features in different ways.