Last week, we asked what your favorite feature in creative software program is. We received votes in a wide range of software from 3ds Max and After Effects to Houdini and Blender, although the software …

Last week, we asked what your favorite feature in creative software program is. We received votes in a wide range of software from 3ds Max and After Effects to Houdini and Blender, although the software that ended up getting the most features ended up being MODO. There were a ton of great features represented and, quite honestly, many features that artists here at Digital-Tutors have expressed to be major time-savers for us in the past, like the MMB click in Softimage. With that said, let's break down the top five features as nominated by the community. You'll have a chance to vote for your overall favorite feature in creative software at the end of this post.

This is the only truly software-independent feature that made it to the top five. It's really interesting, too, because it points out something that is fundamentally true for all CG artists and that is everyone makes mistakes. A lot of artists, especially those who are just starting out, tend to think that there's a place where somehow you don't make mistakes anymore. Of course, this isn't accurate. Everyone makes mistakes and that's where working in a digital world really has a benefit over working traditionally. If there's one feature that sets CG artists apart from traditional artists, it's the ability to undo. Another really great way of taking advantage of the undo feature is to let it free you to make mistakes on purpose. Sometimes being creative means trying things and making tweaks until something looks right. If you know you can undo your work and get back to where you were, you'll be a lot more likely to take risks and be creative. If you aren't fully taking advantage of undo in your favorite creative software, now is a great time to start. Because undo is in just about every computer program, we have tutorials that cover this feature in everything from Photoshop to MARI and just about everything in-between.

One of the first things you'll do as a Maya artist is to become acquainted with the Hotbox. A marking menu is really just a radial menu that pops up under your mouse within the Maya viewport, and while the Hotbox contains a lot of them, most of the marking menus you'll find in Maya exist outside of the Hotbox. There's a lot of ways you can customize Maya, but one of the most time-saving ways is to use the built-in marking menus spread around the program. For example, if you have a polygon object selected and you hold down Ctrl+RMB click on the object, you'll be greeted with a marking menu that allows you to quickly switch to any of the polygon's component modes. If you have a NURBS object selected, the same Ctrl+RMB on the object will give you a marking menu with NURBS component modes. As you can imagine, this method of moving around Maya's commands can save you a ton of time. It doesn't stop there because you can create your own custom marking menus. This lets you ensure that all of your favorite commands are at your fingertips, or more accurately under your mouse cursor, at all times. Not only can you pick from Maya's built-in commands, but you can add your own custom commands (using MEL or Python) along with customizing what hotkeys you have to pull up what marking menus. For example, you could set one hotkey to pull up a marking menu with all of your favorite modeling tools and another hotkey to pull up a marking menu with all of your favorite animation tools. With all of this power it's no wonder marking menus made it to the top five favorite features for so many artists. If you're not already using custom marking menus, check out this lesson to learn how you can start to take advantage of this powerful feature in Maya. 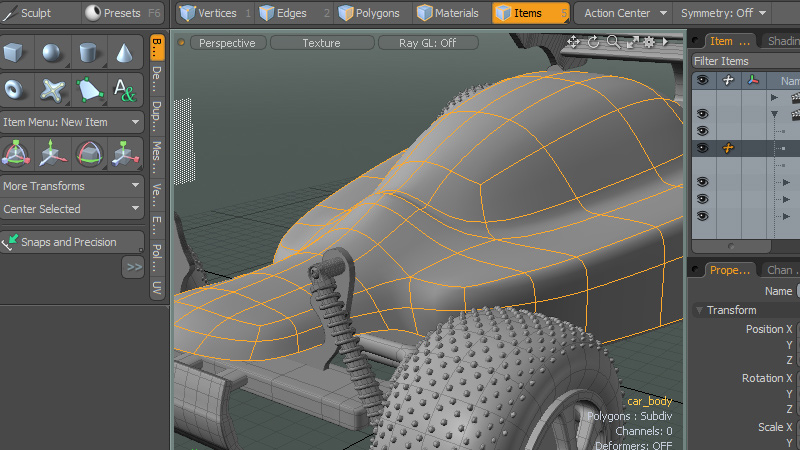 Unlike some of the other features that made it to the top five, the concept of why Pixar's SubDiv in MODO is something that many artists see to be so great is a little abstract to grasp. To understand it better, you'll need a crash course in exactly what issues subdivision surfaces solve. When you're modeling something there becomes a fundamental problem with simple polygons. That's because polygons are made up of straight lines. In the early days of 3D, the only way to get a smooth surface out of polygons was to manually go in and add a bunch of polygons. Fortunately for us, there's some really smart people who've figured out how to do that automatically. You can read about the math behind it here if you'd like, but basically as you may have guessed, two of those smart people developed an algorithm that can do exactly this. Pixar's Ed Catmull and Jim Clark are the brilliant minds behind the Catmull-Clark technique of smoothing polygons to a subdivision surface. The Catmull-Clark algorithm behind what we know as subdivision surfaces was first introduced in 1978. As you can imagine, quite a few things have changed in the world of CG since then and as technology has changed so has the demand for a more processor-friendly solution. In December of 2010, MODO 501 was released with a new type of subdivision surface they had licensed from Pixar called Pixar Subdivision Surfaces (also referred to as Pixar SubDiv, Pixar SubD or just PSUB), which could be over-simplified to be thought of as an updated version of Catmull-Clark subdivisions. Some of the primary features of Pixar SubDiv in MODO are the ability to do multi-resolution sculpting, increased edge creasing and a host of other advantages. In fact, it was MODO's development team (then Luxology) working with Pixar to develop PSUB in MODO that ultimately made Pixar's OpenSubdiv technology possible, which they first released a couple years later at the 2012 SIGGRAPH in L.A. While PSUB in MODO is not exactly the same as the open source OpenSubdiv, that's really only due to it being integrated into MODO before OpenSubdiv even existed. As an incredibly powerful feature, many of those who voted for it regarded PSUB as one of the big reasons why MODO quickly rose to become such an amazing modeling tool over the years. You can learn how to take advantage of this great feature in the Introduction to Modeling in MODO. 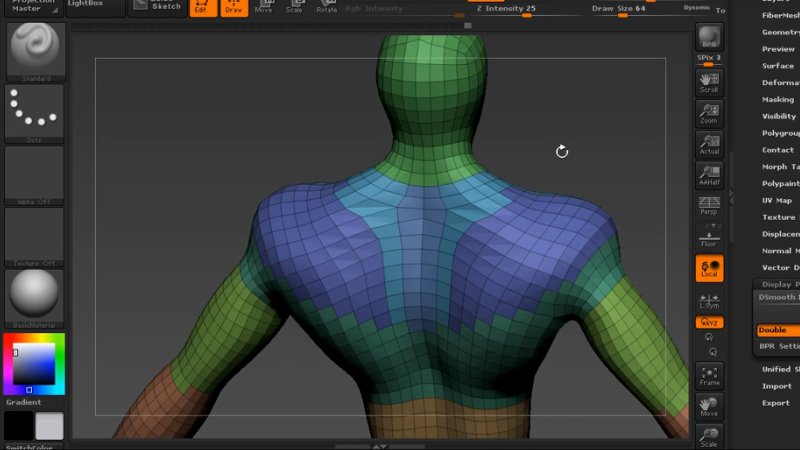 If you're working in ZBrush, the chances are pretty good you'll be dealing with tens of thousands, hundreds of thousands or even millions of polygons. Incredibly high resolution detail is just something that comes naturally to ZBrush. So when you've got a mesh that's so dense you couldn't tell the difference between wireframe or shaded mode, how can you be expected to keep track of the mesh topology? Enter polygroups. With a super-cryptic naming scheme, it's probably hard to tell what polygroups do, but there's some pretty neat tricks you can do with polygroups that go beyond just grouping polygons. For example, if you're working on your character's head and find his arms are getting in the way as you're orbiting around you can use polygroups to quickly hide or show different parts of your mesh. This lets you focus on a specific area of your high resolution mesh without having to actually break it up into multiple objects, like you would if you used different SubTools. Polygroups, which can be quickly created by converting UVs into groups, are also commonly used throughout the entire modeling process in ZBrush as a quick way to manipulate large areas of a mesh, add in resolution to specific areas or even to aid with masking off areas from being affected by whatever tools you're using around them. For any CG artist wanting to get into using ZBrush, polygroups will definitely be something that you'll want to get used to using. You can get a head start on that right now by watching this tutorial. 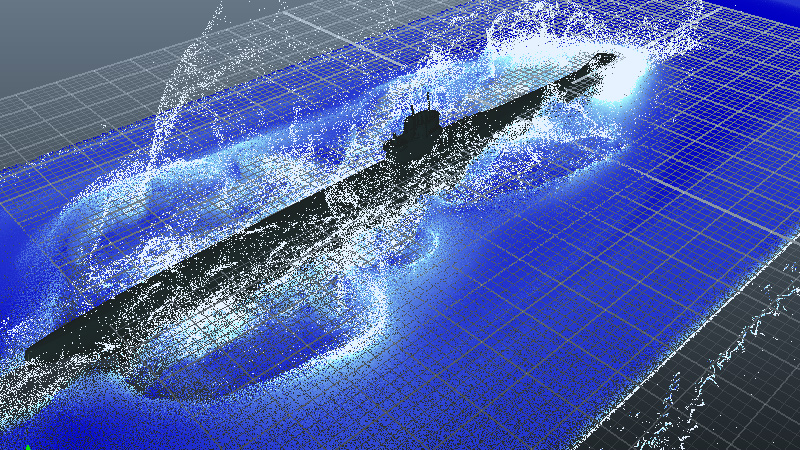 We weren't surprised to see Hybrido in this list. Although we didn't know it would make the list at the time, you may recognize the Hybrido image above from our call for nominees. Or maybe we're just psychic. Like Pixar's SubDiv in MODO, Hybrido in RealFlow is a bit of an abstract concept to grasp. Some of that abstract nature starts with the name, which stands for HYBrid laRge dImension LiquiD SOlver and essentially it is an extremely powerful way to simulate large amounts of liquid. Although it's not limited to just water, one of the common uses for Hybrido is to simulate a large body of water, like a pond or even an ocean. With Hybrido you can add just about anything you would expect to find in a real body of any liquid, such as splashes, foam and mist to name a few. Another thing that's really nice about Hybrido is it's interaction with objects. This makes it easy to add in any sort of geometry you might have to interact with the liquid. For example, in the image above you can see a submarine, the object, as it splashes down in the water, which is simulated with Hybrido. After being first introduced in RealFlow 5, Hybrido has seen continuous improvements including a massive update that was essentially a rewrite of the solver with RealFlow 2013. Now on RealFlow 2014, Hybrido continues to improve with some impressive new control for viscosity that will allow you to create thicker liquids, such as chocolate. If you're needing to sort large fluid simulation and haven't yet looked into Hybrido, check out what it can do for you in this tutorial.

Each of these five features showcase some pretty impressive technology that has really pushed the CG industry forward. Yes, even something as seemingly simplistic as the use of Ctrl+Z has helped push CG forward. Of these five nominees, now's your chance to vote for the community-chosen winner. [polldaddy poll="8279844"]