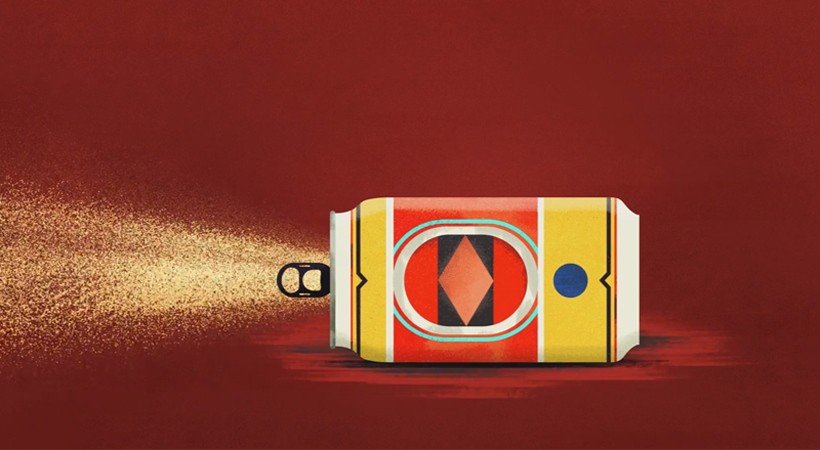 Unintentionally dropping something is something we're all acquainted with, and LA-based 2D artist, Jordan Scott, recently released an animated short  that examines this universal human experience. The short, entitled “Butter Fingers," reveals a series of animated "drops" of common, easily identifiable objects like toothbrushes, light bulbs, and hand grenades. These images are accompanied with a playfully comic score along with the groans and moans of the unfortunate, butter-fingered droppers. One thing that's obvious from the short is that Scott has a great skill at key frame timing and an adeptness at simulating the effects of inertia, mass, and gravity on different objects as they roll across or hit the ground. The three knives that fall, sticking into the ground, are a good example of Scott's eye for detail. You'll notice that while the meat clever sticks and remains static, the hunting and chef's knives continue to move because of their lighter weight and thinner blades. The hunting knife performs a short-lived vibration because of the larger mass of the handle forcing it from from side to side while the slow sideways lean of the chef knife is a nice, realistic touch. Given that chef knife's blade point is blunter, its stick into the ground would be shallower, causing it to be less anchored.

The hand grenade is also a good example of animating realistic mass. After falling, its see-sawing movement suggests a heavier bottom section. After its detonation arm springs open, the entire mass moves once more. In addition, both the donut and salt shaker show a fine handling of a small particle element's reaction, which is evident within the bouncing sprinkles and spilling salt.

Scott's design also is an interesting combination of "flat" and 3D design. For example, the marbles rolling across the floor are provided specular lighting to give them a 3D look. The shadows they cast, however, are much more flat and stylized. The shadows have an interesting "jittery" look to them rather than simply smooth, dark gray ovals that faithfully follow along. Their forward movement is rendered nicely, even if their spacing seems a bit too uniformly spaced by the end to be real. Overall, "Butter Fingers" is a delightful short while also being almost a study in the art of falling objects. What did you think was most impressive. Let us know by commenting below.