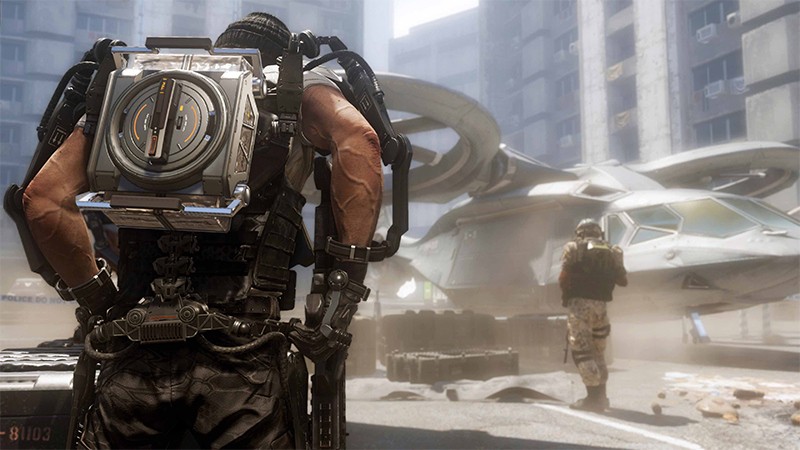 In a video released at E3 this week, Sledgehammer exec's Michael Condry and Glen Schofield discuss the overhaul of the Call of Duty engine for the latest installment of the franchise: Advanced Warfare. In the video, Condry touts the new game's enhanced rendering, animation, physics, and audio systems while Schofield stresses the advancements made over previous versions of COD for story, dialogue, and facial expressions that were intended to make the game more immersive.
[youtube http://www.youtube.com/watch?v=xwxPr-jvYSc?rel=0&vq=hd720&showinfo=0&autohide=1&theme=light&color=white&w=800&h=450]
Advanced Warfare's hyped weapons and armor advancements, like the M1 Quantum rifle, seem to echo Sledgehammer's new approach to the series, which is "power changes everything." One manifestation of gamer power comes in the form of the newly introduced M1 Quantum rifle. The M1 is a new class of weapon for the series and is a battery powered, directed energy weapon, which can potentially allow you zero reload time because it requires no ammunition. Such a weapon would be an interesting development for multi-player sessions if searching for ammo isn't as much of a factor. For those players who like going vertical, Advanced Warfare provides a powerful boost pack that allows you to take higher positions or avoid injury during drops.

Advanced Warfare's induction game play video also shown at E3 this week highlights the game's new environments like a slick looking Times Square-a-la-Armageddon cityscape complete with jumbo-trons that still work somehow despite the enormous amount of destruction going on within the city. The video also gives you a sneak peek into the various types of grenades available, which range from standard Flashbangs and EMPs to an interesting "THREAT" grenade that highlights enemies in red in addition to booster rocket powered "SMART" grenades that can seek out their victims where ever they hide. Additional features to COD are large Titanfall-esq robots built like tanks and armed to the teeth along and large swarms of drone-like robots that fly at low altitudes looking for victims.
[youtube http://www.youtube.com/watch?v=1sRUZ9p4oYQ?rel=0&vq=hd720&showinfo=0&autohide=1&theme=light&color=white&w=800&h=450]
From its trailer Advanced Warfare does seem to have upped the immediacy of the COD experience with nicely conceived urban landscapes and dramatic situations for the storyline. Also, the trailer's audio does present a expertly rendered, vast array of sounds ranging from low, distant booms to the sharp, tinkling of small debris up close. The facial capture renderings do contain realistic texturing and modeling, but the range of facial movements for the NPC's don't quite mesh with their dramatic dialogue. The story's drama seems driven by intense situations rather than character expressions. It's hard to be emotionally moved by excellent dialogue, if the character's faces appear relatively frozen. Overall, Sledgehammer's claims at re-vamping the COD experience with an overhauled game engine seem to be justified, but there's still some factors that need work. Either way, come November, you can check out the game itself and see if it lives up to the hype. Check out the videos and let us know whether Advanced Warfare engine is indeed an advance on the COD experience.