Camera structure and language within Inside Out

Most, if not all, elements of narrative film and video production are designed to service the storyline. Set design creates believable costumes and locals. Lighting can alter the mood of a scene, and sound design can build suspense or drama. In an effective production, all of these elements work together to tell the story. Cinematography works the same way. Whether it’s your camera movements, shot compositions or even the type of lens you choose, these decisions all impact the way an audience reacts to and understands your story and characters. [caption id="attachment_47295" align="alignnone" width="800"] 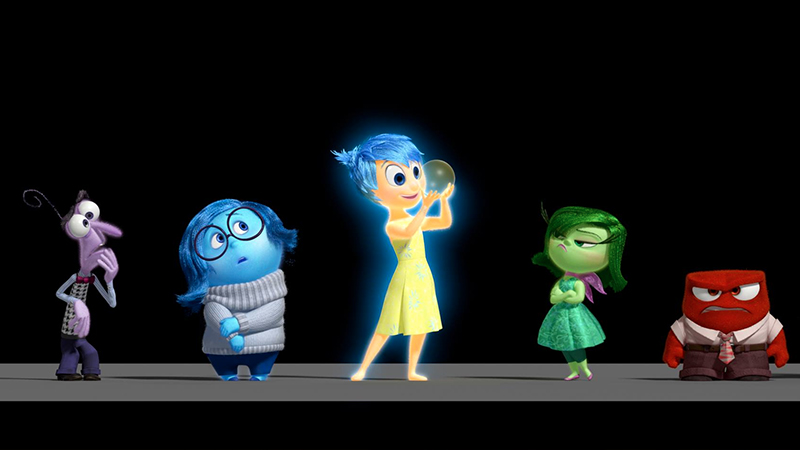 © Disney, All Rights Reserved, Disney Entertainment[/caption] Pixar director of photography, Patrick Lin, recently explained in a SIGGRAPH talk how he and his layout team helped develop the camera structure of Inside Out. Lin defines camera structure as a “way of organizing all of [a film’s] visual elements into something coherent that can support the story and characters’ emotions.” He also explained that camera structure is made up of 3 parts: Understanding Pixar’s approach to camera structure can help you apply similar ones your own projects, whether they’re animated or live action. Recently, we had the chance to chat with Lin about the camera structure within Inside Out. Listen to our podcast with Lin below, or continue reading to get a synopsis of Lin's discussion. [Warning: Contains spoilers]

Your camera language essentially determines how you want your camera to communicate or "speak" to the audience. For example, your camera language might depend on a specific lens length or shot length (ex: medium, close-ups, etc.). Since Inside Out's story takes place in two very different worlds, (i.e. the inside world vs. the outside world), Lin wanted the camera language to deepen this contrast. Widening the distinction would also help the audience understand when they're in one world versus the other. Lin and his team designed two distinction camera languages, one based on perfection and the other one imperfection. The thinking was that the film's external world is real and so should feel imperfect and flawed. In contrast, the internal world of Riley's mind is characterized as virtual and imaginary and so could be perfect. [caption id="attachment_47305" align="alignnone" width="800"] 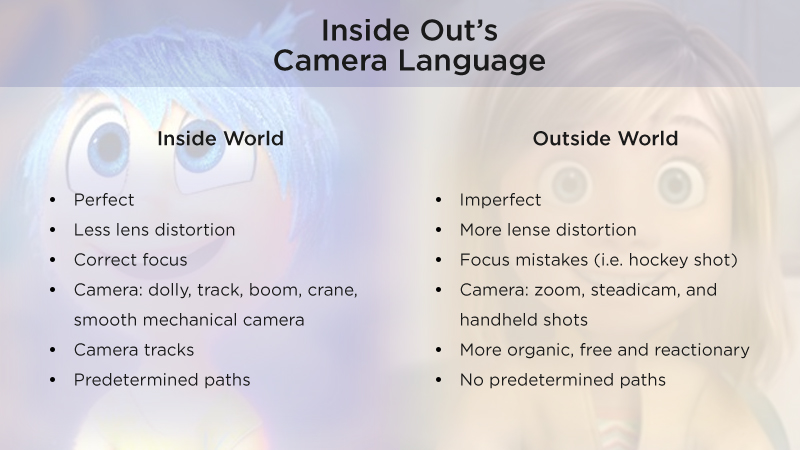 The Pixar team inscribed the external world (i.e. San Francisco and Minnesota) scenes with flaws by incorporating lens distortions and focus pulling mistakes. Also, they used more organic, kinetic camera movements for steadicam and handheld looks. The camera paths were also less determined, seeming to roam throughout a space with no definite track.

In contrast, Riley's mental world was seen through less lens distortion and more in focus. What's more, the camera movements were much more studio-like. The result was usually a dolly, track, boom or crane shot with a fluid and mechanical looking motion that was more predictable.

While contrasting these two differing visual styles may not seem ground-breaking, their execution throughout the entire film certainly took a unique approach. Lin's team shifted the two visual languages to reflect Riley and Joy's changing emotional arch throughout the story. As the emotional intensity progressed, the contrasts in the two camera languages would become more profound. Sometimes the visual styles of the two worlds differed little, other times it was very noticeable. The team meticulously mapped out their camera plan to match different acts of the story.

Throughout Act I Riley's world is relatively stable. She has yet to feel the emotional upheaval of embarrassing herself in class or falling at hockey tryouts. To reflect her emotional stability, the team used the studio style, mechanical camera for the "inside" shots of Joy's small world, tucked securely within the control room. [caption id="attachment_47252" align="alignnone" width="800"] 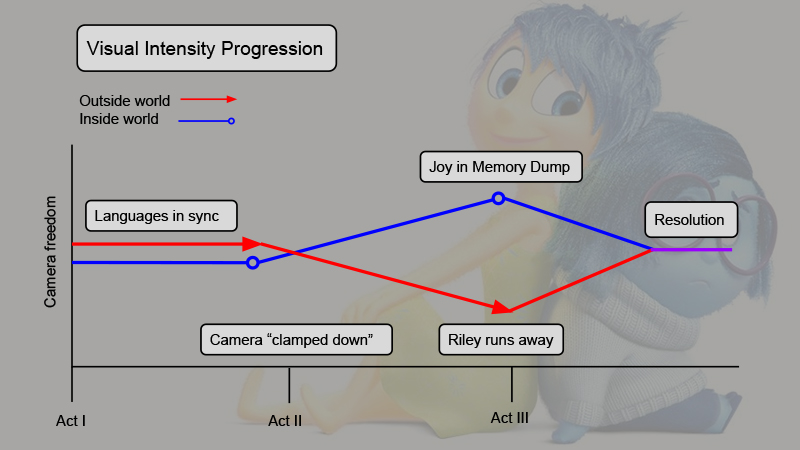 The growing contrast over time between t he different camera languages. © Disney, All Rights Reserved, Disney Entertainment[/caption] Riley's outside world is viewed in a somewhat similar way with steadicam shots. However, more randomized were used to illustrate her coming of age and freedom. Overall, the two camera languages for Act I appear in sync and fairly unified, with little difference visual between Riley's inside and outside worlds.

Soon Riley's troubles at home and school begin to leave her apathetic and depressed. She starts to withdraw from her parents, and her emotions become "clamped down and unstable," according to Lin. In response, the outside world camera becomes devoid of spatial movement, locked to the tripod and limited to pan and tilts. It's at this point, Lin explains, the first use of the imperfect focus pull occurs during the hockey tryout. "Like the camera," he states, "Riley has become unfocused in her hockey practice." [caption id="attachment_47284" align="aligncenter" width="500"]

For a brief instance, the focus pull is off in this scene. © Disney, All Rights Reserved, Disney Entertainment[/caption] As the narrative moves into Act II, the contrast between the two camera language begins to widen. As Joy and Sadness get increasingly lost within the maze-like world of Riley's mind, their camera becomes much more agile, moving through space with quicker pans and tilts.

By Act III the two languages have completely swapped. Joy's fall into the Memory Dump with Bing Bong along with Riley running away from home are the most emotionally intense moments in the film. Sweeping mechanical movements follow Joy as she continues her journey back to the Control Center while a more chaotic handheld camera follows Riley as she boards the bus bound for Minnesota. Lin explains the motivation behind the switch: "Riley's running away, and she doesn't feel like she's being supported by her family, so we went with a handheld" camera to reinforce this feeling. Finally, the story's resolution ends with the return of Joy and Sadness and the reconciliation of Riley and her parents. Both families have united with stability and balance returning to both worlds. The resolution is signified visually through the mixing of the two camera languages: the scene begins with a steadicam shot (i.e. outside world) and transitions into a crane shot (i.e. inside world) that smoothly lifts away from the action. Lin explains that prior to this scene the two styles had never mixed and that the scene's purpose was to "symbolize the harmony of the inside and outside world." [caption id="attachment_47294" align="alignnone" width="800"] 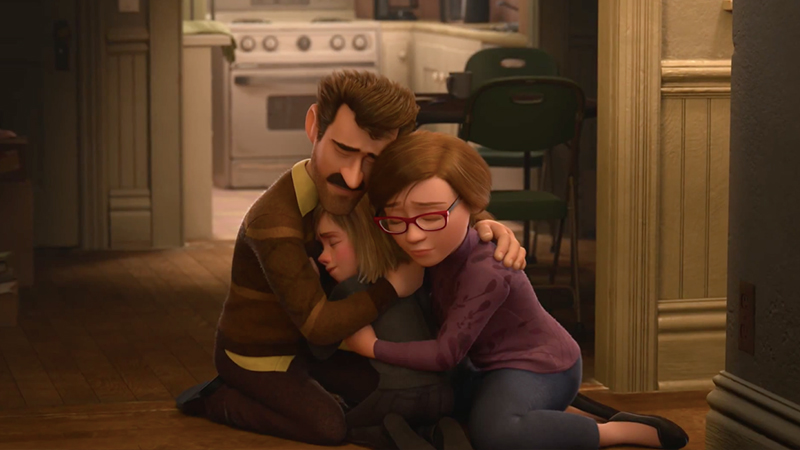 In this ending scene, the two camera languages are combined to show balance restored. © Disney, All Rights Reserved, Disney Entertainment[/caption]

Scale progression involves expressing the size of the world from a character's perspective. Again, the difference in size of the inside and outside worlds alternates as the story progresses. To affect the perceived scale of the different spaces, Lin and his team used composition, framing and strong horizontal and vertical lines to create a sense of openness and enclosure respectively. [caption id="attachment_47272" align="alignnone" width="800"] 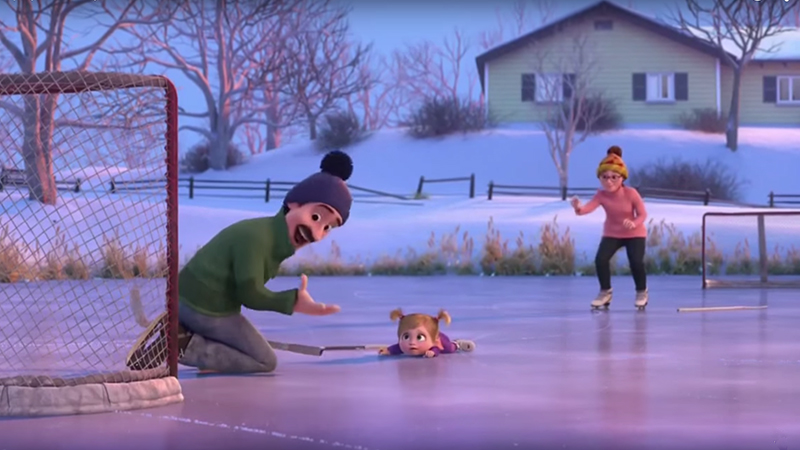 Strong horizontal lines from the fence and pond create a sense of openness in this happy family scene. © Disney, All Rights Reserved, Disney Entertainment[/caption] At the start of the film, Riley is shown growing up in Minnesota. Her world is big, wide and open. Strong horizontal lines frame these scenes as long shots show her surrounded by lots of space. However, after moving to San Francisco, her more urban world gets smaller and more enclosed with strong vertical lines consistently framing her. As the emotional intensity of the scenes increases, this vertical framing strategy also increases, squeezing her into tighter compartments until the climatic scene on the bus when she is completely alone. [caption id="attachment_47271" align="alignnone" width="800"] 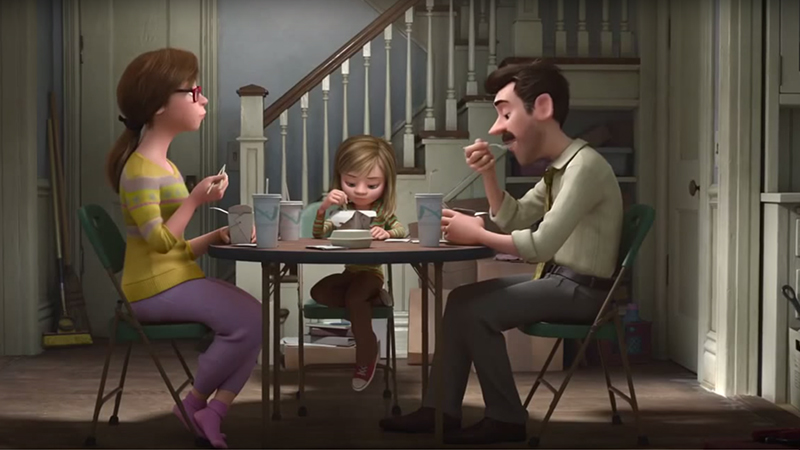 An abundance of vertical lines compose this image during one of Riley's most emotionally intense moments. TM & © Disney, All Rights Reserved, Disney Entertainment.[/caption] In direct contrast, Joy's world begins in the small, confined space of the Control Center. It's only after she and Sadness are sucked out of HQ, that the inner world becomes an incredibly large, open space. Similar to the outside world, Joy's world continues to expand larger until the story's climactic moment when she falls into the fathomless Memory Dump. According to Lin, this moment contains the film's widest shot.

The Inside Out example shows how to create a specific theme for your project and then adjust your cinematography to reflect that theme. In this case, Pixar used strong contrasts to help identify the different worlds and to help support and reflect the emotional intensity of the characters. To do this effectively, it's helpful to know what specific physical camera elements "say" about a characters emotional state. For example, horizontal lines can communicate a physical and mental "openness" while verticle lines can help suggest that a character feels enclosed, small or trapped. These examples, of course, represent only one element (i.e. cinematography) of a total project. When used in conjunction with set design, color schemes, blocking, sound, and others, the overall effect is amplified.