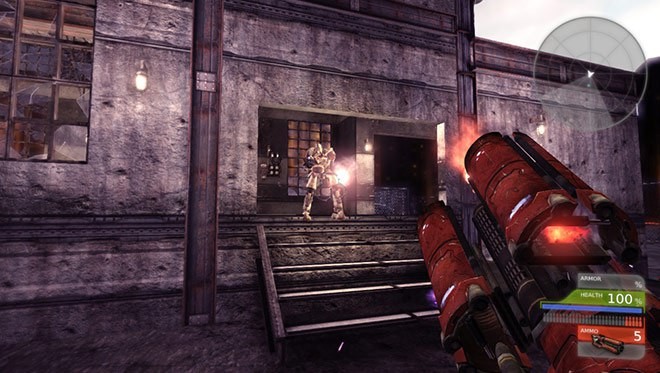 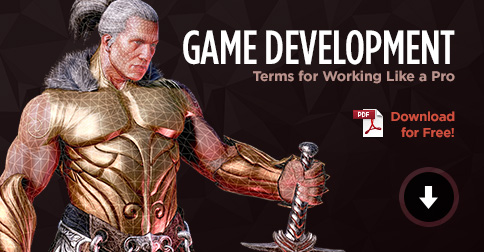 Explore Game Development terms below on Modeling, Texturing,  Animation, and Programming.   Modeling: Assets: Assets are anything that must be created in an external software like 3ds Max, Photoshop, ZBrush, etc. Assets can be models, textures, sound effects, animations, and much more. Modeling for Games: The modeling process for games is very similar to the modeling process in film, but when modeling for games it is important to consider the polygon count of the model and keeping the polygons as Quads or Triangles. Polygon Count: The "polycount" of your model is the total number of triangular  polygons it takes to render your model in 3d space. The higher your polycount, the longer it takes for the system to render it.

Triangle: A triangle is a single three-sided polygon of a 3d model. Each polygon in a 3d model will be "triangulated" when it is imported into a game engine. Quad: A quad is a single four-sided polygon of a 3d model. It's important to remember that a quad is made up of two triangles. Real-Time Render: Games are expected to render at a specific speed called Frames-Per-Second. When the player presses a button, they expect to see an action "render" immediately. The render time can be affected by a lot of different factors, but if a game is optimized, the art assets are usually the main reason for low frames-per-second.

Optimization: Optimization is the process of reducing memory usage of your assets. For example, models are optimized by reducing their polycount without drastically affecting the silhouette of the model. Silhouette: The silhouette is the major form of a model. This does not include any detail. For example, screws in a  weapon or a button on a cell phone. Small details like this can be faked using a normal map. LOD Models: Level of Detail Models are different versions of the game resolution model used in the game. These models vary in polygon count and are swapped out based on the model's distance from the camera. This is an extremely important aspect of optimizing games. (Learn more about modeling for games)

Texturing: UV Maps: UV mapping is a tedious but necessary part of creating custom textures for your 3D models. UV maps bridge the gap between 3D objects and 2D textures, allowing us to layout the 3D object in flat UV coordinates to paint them with vivid detail. Texturing for Games: The texturing process for games is very similar to the texturing process in film, but when texturing for games it is important to consider texture resolution and what types of maps must be used to get a certain look or effect. Texture Resolution: Texture resolution is the dimensions of your texture. Diffuse Map: The diffuse map is the flat color of your game object. Essentially, it is just an image wrapped around your model without any special effects applied.

Bump Map: Bump maps are a great way to give an object the illusion of depth or relief without increasing render time. Using the black, white and grey data stored in a bump map, the surface properties of the object will be altered by the value given. Normal Map: Normal maps are similar to bump maps in that the illusion of depth or relief is created by a normal map's color. For normal maps however, they use RGB values to signify the orientation of the surface normal. This helps game artists take highly-detailed models and bake all of the surface detail into a normal map - which can be applied to a low-poly model and create the illusion of high-res detail. Specular Map: A specular map is used to add "shininess" to an object. Dark colors of the image provide little to no shininess to the model, while light colors provide more shininess. Alpha Map: Alpha maps are also known as transparency maps and they are used to make areas of a model more transparent. They are usually grayscale images. The darkest areas of the map will provide zero transparency and the lightest areas will be transparent. Some examples of where these maps are commonly used are hair, cloth, plants and windows. Displacement Map: Displacement maps add high resolution detail to a model, much like a normal map. However, displacement maps physically push or displace the vertices of a model while a normal map does not. There are two things to be aware of when using displacement maps: 1) A model must have enough vertices to be displaced in order to change it's physical shape. 2) Displacement maps can be costly, so use them wisely.

Emissive Map: An emissive map is a map that will provide a glow affect if the engine supports it. These maps can be any color. However, dark areas of the map will provide little to no glow. Light Map: Light maps are maps that are used to reduce the high memory usage that comes with adding lights in a game environment. This can be done through "Light Baking". The level artist would light the level as normal and when he/she is finished, they will bake the static lights into the textures of the level. Then all of the static lights in the level can be removed, thus freeing up the much needed memory to make a game run smoothly. Tiling Textures: Tiling textures are textures that can be applied to a model and repeated infinitely in one or more directions. Tiling textures are typically used on surfaces like walls and terrains that would be difficult to texture by hand. It's a good idea to create multiple variations of tiling textures to create a more interesting look of the game. The same brick texture on multiple buildings would look very odd. Decals: Decals are textures with transparent properties that can be applied to surfaces in the game to help break up bare and uninteresting area of the game. Some examples of decals in a game would be bullet impacts, blood splatter, posters, trash, and stains. Shaders: Once all of the textures are created, they are combined into an "object" called a shader. Each texture must be applied to it's proper channel on the shader. The shader will then display the texture's affect on the model. At this point, the user can tweak certain parameters to get the final look of the model. (Learn more about texturing for games and watch a free CG101 lesson on texture mapping)

Animation: Animation for Games: Animation in games is very similar to film. The models will be rigged to skeletons and animated with keyframes. However, games have a much higher need for looping animations and one-off animations. Rigging: When rigging assets for games, you are creating controls, bones and more, and the ability for the asset to be animated. Skinning: Skinning is the process of connecting or associating the individual bones to the corresponding skin sections. The connection between bones and skin needs to be gradual -  assigning weights to how much each skin polygon is affected by the bone's motion.

Programming: Game Engine: These engines are the systems for creating and developing your games. Most popular game engines use a software framework that lets game developers bring in assets, create functionality and publish their game for play. Popular game engines include the Unity game engine, Unreal game engine, CryENGINE and more. Game Loop: The game loop is what lets a game run smoothly whether there is input from a player or not. GameState: This ican be considered part of a game's internal logic and defines an object at that particular time and keeps track of items such as timers, kills and rounds. A game's internal logic is one of the most important parts of any game's development. GUI: The Graphical User Interface are the elements that a player sees when playing. The interface can consist of remaining ammo and time, touch-screen buttons, points and much more.

Player Input: The name pretty much says it all on this one, but it's key to know when talking about game development. Player input is how the player's controls interact with the game. The input can be via mouse, controller, keyboard or touch screen and may differ from device to device. AI: Artificial Intelligence is the computer's logic when making decisions in a game. Waypoints: Waypoints are a quick and powerful way to create a simple model of a level that an AI can understand. Scripting: There are common scripting languages for games, c++, c#, Java and more, and scripting is an essential part of game programming. An understanding of the languages and how scripting is connected to all parts of game programming will help in your game development skills.