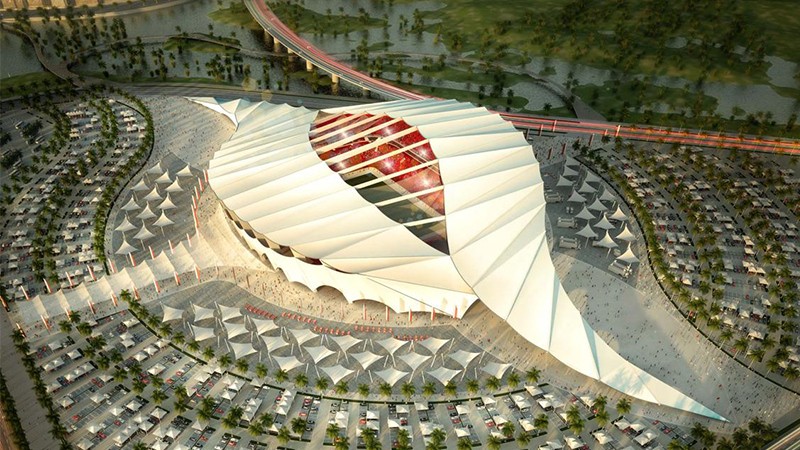 Although still eight years away, the 2022 World Cup Series is already in the planning stages for its host country, the State of Qatar.  Nine proposed artist's renderings were  recently released for the proposed soccer stadiums. We wanted to take you on our guided tour to take a look at these stadium concepts and give you our take on the proposed plans. Qatar is located on a peninsula, so many of the designs have the Persian Gulf as a backgrounds and aquatic themes. Others draw on the international feelings of connectedness and national pride. 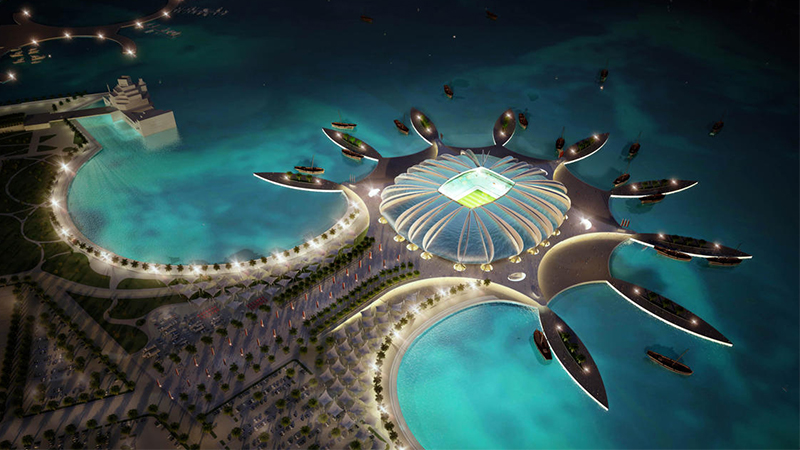 Truly a sight to behold, this stadium's concept, located in Qatar's capital city of Doha Port, looks very much like an aquatic sea inhabitant with its circular, jellyfish look and aqua-marine coloring. When viewed from ground level, this stadium resembles the undulations of a jellyfish frozen in flight as it shrinks and expands. Also, the nine docks that radiate from its center resemble the tentacles. Each pair of lights help add to the effect. This one definitely gets our vote for best soccer under the sea venue. 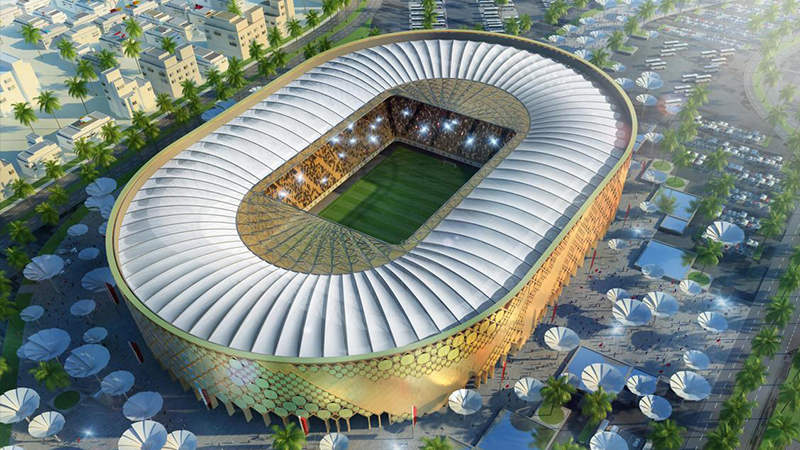 More traditional in its look, this stadium is planned for Qatar University. It sports an semi-domed roof reminiscent of the coverings that once donned the Roman Colosseum. This ancient homage is certainly appropriate for such a competitive event like the World Cup. However, this war-like reference  is softened by the inverted umbrellas structures planted along its perimeter. They look like flowers or lily pads. The stadium is a unique take on a classic design. 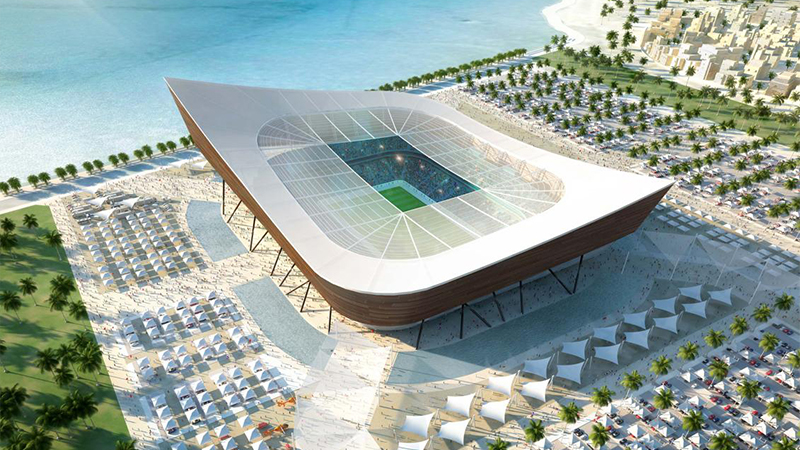 The Al-Shamal stadium also located in Qatar is said to resemble a local fishing boat design called the "dhow." The wooden sides suggest a traditional and nautical theme. Its exquisite curves also give it a modern and sophisticated look. Adding to its boat-like appearance is its supporting system, which resemble stilts. These props make the stadium look like a giant ark filled with humanity waiting to be launched into the ocean. We think this design is setting sail for greatness. 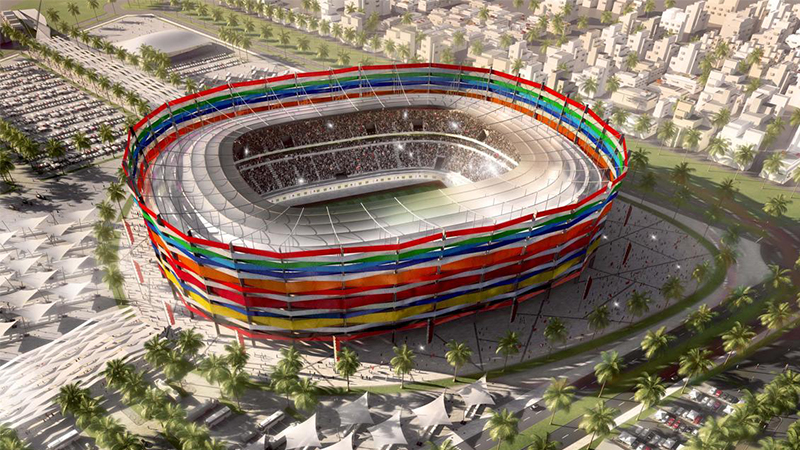 The Al-Gharafa stadium in Qatar will be designed to have a changeable facade of banners. The banners will represent the team colors of those who qualify for the 32 spots in the World Cup. This decorative feature is said to symbolize the friendship and respect that the sport of football brings to the world. Although beautiful in its concept, the practical application of putting up these banners will be just as interesting to watch. 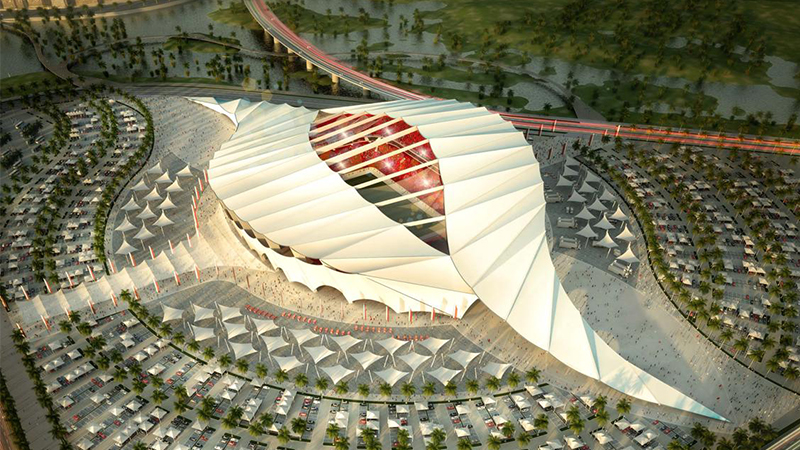 This conch shell-inspired stadium will reside in Al-Khor and features elongated ends that taper to an elegant point. The archways along the side create a rhythm with the roof sections. Also, the entire structure looks right at home along side the similarly shaped highway. We say there's a hidden pearl within this finely crafted cretaceous concept. 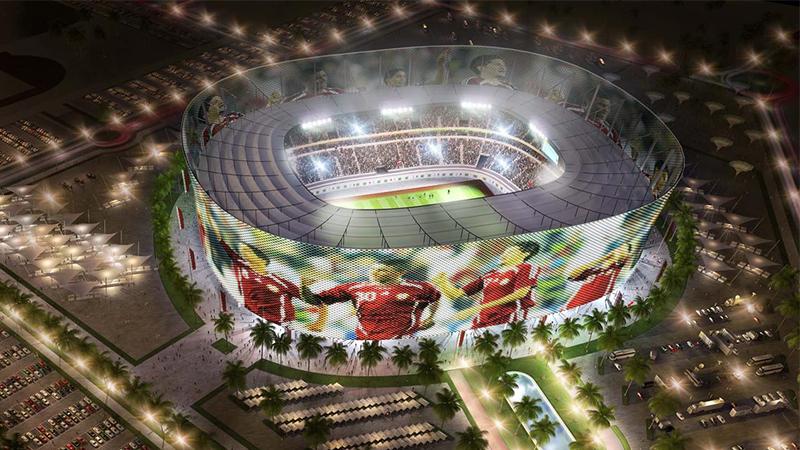 The Al-Rayyan statium in Qatar may be the least architecturally ambitious of the group. However, it's certainly going to be the most technically challenging. This is because its facade is designed to be an entirely enclosed projection screen. The screen will display news, commercials, and updates. We think Al-Rayyan will certainly win the Guinness Book of World Record holder for "largest hi-def television screen at a sporting venue." This title is currently held by Charlotte Motor Speedway's in North Carolina at 196 ft 10 in x 77 ft 2 in.

The Umm Slal Statium in Qatar takes its inspiration from a nearby fort. We can certainly see the influence. The golden facade, when combined with the structure's room, creates the illusion of being massively thick and fortified. The roof's angular design provides a lot of interest to the eye.  The roof's sections provide a sense of complexity and simplicity at the same time. The building's illumination by the stadium's interior lighting would certainly be something to see during a night game. We'd buy a golden ticket to see a structure only Willy Wonka himself could have conceived of. 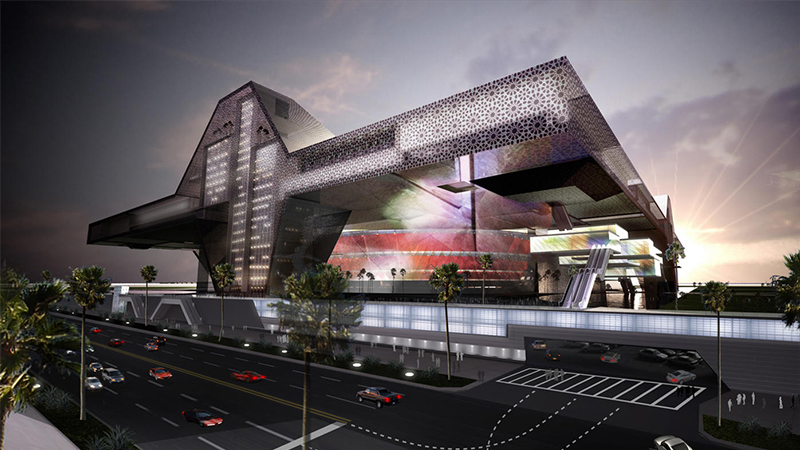 This design is said to mimic traditional Arabian tent architecture. It definitely accomplishes an extended and tent-like feel. Its cantilevered roof makes us think of Frank Lloyd Wright's famous "Falling Water House". The apex provides some much needed elevation to the structure's design, and gives it a sense of prominence and importance. 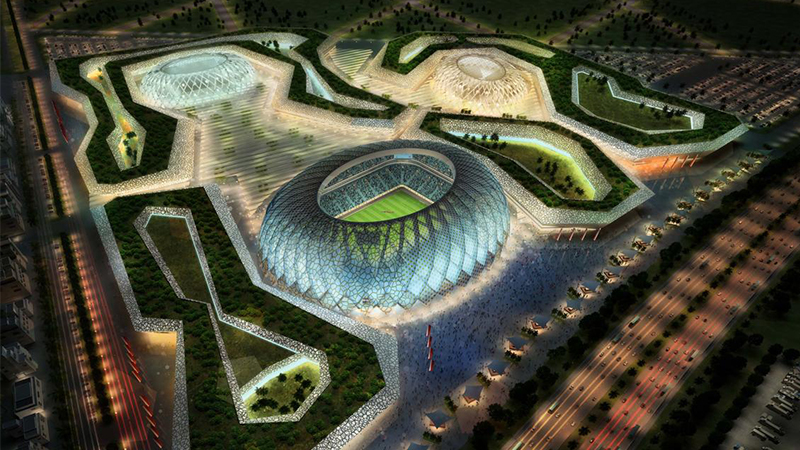 Perhaps the most elegant of the renderings, this Al-Wakrah stadium features ironwork mesh for a translucent look. Almost a combination between Concept #1 and #4, the structure gives a geometrical, yet aquatic-organic shape with its over-lapping iron-work mesh facade that expresses a delicate fragility as well as strength. We also think it looks like our Grandmother's candy dish bowl turned upside down. Let's hear what you have to say about these various stadium concepts. Do they seem practical or even realistic in their design? Which one catches your eye the most? Comment below and let us know.