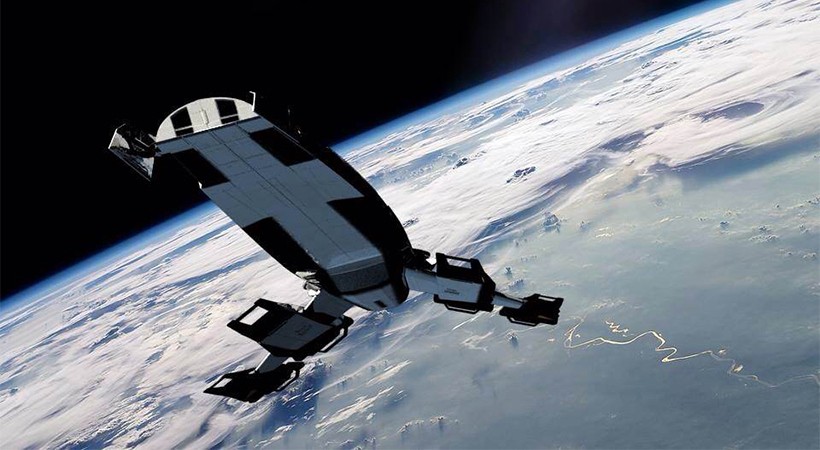 Like most of us sci-fi/fantasy nerds, you've probably had the usual debate amongst your friends about which super hero would defeat another in some hypothetical battle. While most of us enjoy entertaining these types of fantasy match ups, few of us actually move any where beyond our own imagination. However, there are dedicated groups of CG artists who use their talents and spare time to actually give form to such make believe melees. What's more, they do it just for the fun of it. They create because they have a passion for their work and a dedication to giving life to their visions.

You can find one such group of talented artists making up the Galactic Battles Project, an open-source visual effects project based out of Vancouver. Permission to come aboard the project is open to anyone. As its name suggests, the project intends to create a CG battle of epic proportions by pitting some of the most iconic sci-fi space ships against one another in an inter-galactic fight to the death. Models being used include ships from Star Trek, Star Wars, Battlestar Galactica, Eve Online, and the Halo franchises.

However, Galactic Battles is no simple simulation of ships firing at ships, but rather a fully-formed, CG short film with a real storyline. And its CG/VFX visuals are no joke either, being composed with industry-standard software and rendering power. To get more information on the Galactic Battles Project, we spoke with founder and visual effects supervisor, Nick Romick by email. Nick gave us some insights into the challenges and rewards that come with such a project and how, with a little help, you can create your own Galactic Battle. Below is the just-released official trailer for Galactic Battles. The interview with Nick follows.

Tell us a little bit about your background and how you became inspired to create the Galactic Battles project.

I’ve been doing visual effects for the past few years and 3D since 2001. I went to school at Pixel Blue Studios in Edmonton for 3D Animation and Digital Compositing, and more recently took a semester in Houdini at CG Masters Academy in New Westminster. I recently got a job at Method Studios in Vancouver.

I always loved Star Wars and Star Trek as a kid, and I was always interested in space. When I decided to start a collaborative Visual Effects Project, I thought about how cool it would be to have a giant space battle with all of the franchises together. I pitched the idea to the community and they loved it.

How many artists are currently working on the GB project?

Currently, we have about 12 people working on the visual effects for the project. We also have a dedicated screenwriter, at least 5 confirmed voice actors (including Mark Meer from Mass Effect, and Pete Stacker from Halo, an audio engineer, 2 concept artists, and and editor.

How is working on an open source project different from working with a more traditional team?

I think the best part of this project is that the people involved have a real passion for the work they are doing. We aren’t getting paid for this, so we’re pretty much running on pure passion. I don’t think that is something you see as much of in more traditional environments. It’s very inspiring to work with such an awesome team.

Have you had any copyright issues with using images?

Nope. Everything we are doing is covered under the ‘Fair Dealing’ clause in the Canadian Copyright Law, whereas existing copyright works can be incorporated into new works. The clause actually permits the non-commercial dissemination of the new work. Of course, the new work must not have any substantial adverse effect (financial or otherwise) on the original work. The American Copyright law has a very similar (less restrictive) clause, so we are covered in both countries.

Since we aren’t trying to make money off the project and we aren’t damaging the original, nobody is going to come after us.

What’s been the most challenging part of getting this project together?

I think the hardest part so far has been coordinating with people outside of the country. It’s easy when you’re face-to-face with someone, but I think it’s a lot harder to explain complex scenes and ideas across the Internet via Facebook and email. We plan on using Skype going forward, but finding a time that everyone is available is another challenge.

What different types of 3D software did you use on the various parts of the project?

We are using Maya for almost all of the modeling, animation and rigging. For some of the crazy explosions, we plan on using Houdini – it’s just far superior for dynamics and explosions. For post, we are using primarily Nuke, but a little bit of After Effects.

Why did you ultimately decide to use V-Ray for rendering over others?

It’s what a lot of the local studios use, and I’ve heard some really good stuff about it. One of our sponsors, Annex Pro, was able to hook us up with some 3-month trial versions of the V-Ray software, so I made an executive decision to go with it. I’m very glad I did, because the results have been amazing so far.

Where did you get your assets?

Some of our people model them, and we got some of them online from free model sites (like TF3DM, trekmeshes.ch, and scifi3d.com). We will have a very comprehensive list of where we got the models in our final film.

What kind of hardware are you using for this project?

As this is an open movie project, a lot of people are working from home using laptops and various desktop setups. We do have two primary machines set up right now doing rendering and some of the heavier editing. We have a 5,1 Mac Pro tower with 32GB of RAM, SSD drive and an AMD Radeon HD 7950 and a PC running Ubuntu Linux, which has 64GB RAM and an AMD FirePro W7000 video card.

We are going for movie quality, so some of the scenes we are working on can exceed 20 million polygons. This can get pretty choppy without the proper hardware.

While doing the VFX work, did you find some unique ways to approach compositing, animating, effects, etc.? What were they?

Yeah, definitely. While we were trying to animate the camera shots for the trailer, we ended up developing a really cool idea. In our project meetings, I would use my iPhone as a reference, pretending it was the camera. I recorded the movements of the “fake camera” and sent the videos to the animators. This allowed them to use the videos as a reference of how the cameras should move and how the shot should look.

How long do you expect the final film to be? When is it expected to be released?

We anticipate the final movie to be about 15 minutes long. Our writers are still working on the script, but we expect it to be about that long. It will have a lot of chaotic battles, some breaks from the chaos, and even some comedic relief. The planned release date for the project is early 2015.

How can interested artists get involved with the Galactic Battles Project?

Anyone that is interested can drop us a line at [email protected], join our Facebook page or check out our website (http://www.galacticbattles.net) for more information. Since this is an open movie project, anyone from anywhere in the world is welcome to join.

Which ship would win in a battle to the death: the Millennium Falcon or the Enterprise?

That’s a bit of an interesting question. Being as the Enterprise D is 642m in length, and the Millennium Falcon is only 34m, one would assume that the Enterprise would destroy the Falcon in one shot.*

However, during the course of this project, I did a little research about sci-fi weapons in real-world units, and it looks like the Millennium Falcon wouldn’t go down without a fight. In fact, it might just outright destroy the Enterprise in one shot.

To be honest, this is just due to the fact that the original writers for each show didn’t bother cross-referencing other sci-fi franchises before coming up with their stats (and why would they?).

For the project, we have to ignore super-technical stats like this in order to get a fair (or interesting) fight sequence.

*There is some debate on the actual length of the Millennium Falcon, although all estimates place it significantly smaller than the Star Trek vessel. To get some understanding of the debate, visit the Wookieepedia article.