Since the release of the Master Chief Collection last November, the Halo franchise has suffered some embarrassing setbacks. The game's multiplayer component continues to be plagued with problems despite a variety of patches aimed at fixing the issue. This week also saw some technical problems creep into the Halo Championship Series where matches had to be restarted because of freezes and black screens. Understandably, this has left many customers and even Halo diehards feeling a little ripped off. To its credit, however, the Collection has delivered on some of its promises, partly in the form of the exquisitely re-mastered earlier versions in the series. However, what's likely to placate many disgruntled fans for a few more weeks is the recently release beta version of Halo 5 Guardians, a game exclusive download for MCC purchasers. The next gen sneak peek is already creating buzz among some reviewers who see it as re-energizing the series. The game's devs, 343 Industries is also shipping some impressive weekly content that includes new Halo 5 maps and game play options. This week Halo fans will be voting for one of the two newest map additions to the Guardians Beta: "Pegasus" and "Orion". Beyond these expansions, however, the Halo 5 beta's new slick look and player movements are the real standouts. That's because they're simplistic design helps balance the familiar Halo gameplay with  its next gen experience. Its parred down design also helps keep players immersed by downplaying elements that can be distracting. Halo 5 looks and feels like going home...only this new home sports a more modern, streamlined architectural design. Both "Pegasus" and "Orion" are open, multi-storied environments that provide good lines-of-sight along with nooks and crannies for camping. Like some of the best arenas in the franchise's multiplayer, the new maps seem to mix complexity with simplicity in equal amounts. Structures and platforms are geometric, their architectural lines elegant and predictable. Their concrete textures even have a rough smoothness to them. However, the structures' layouts also appear complex, chaotic and multi-leveled, ensuring an infinite combination of strategies. [caption id="attachment_37428" align="alignnone" width="800"] 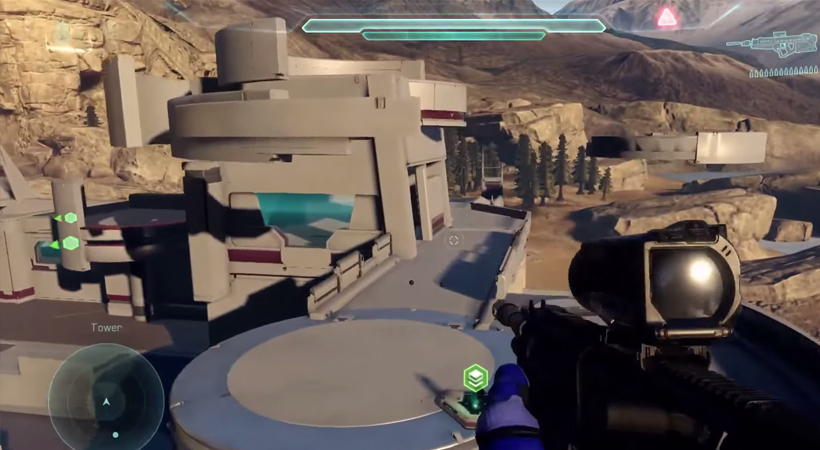 The roundish geometric shapes are a rhythmic theme within the map "Pegasus"[/caption] More immersive components, like the avatars and weapons, also mimic this environmental balance. For example, your Spartan's gloved hands are finely textured with seams visible along the fingers and thumb, looking as if they're made from soft, shiny indestructible leather--nimble but protective. Many of the guns, like the sniper rifle, have a similar sturdy Kevlar-esq feel, as if they're forged from frosted bullet-proof glass. The guns' grayish-black coloring is also consistent from weapon to weapon. Decorative flourishes are kept to a minimum. Telling the difference from the pistol and the grenade sniper is as intuitive as identifying it's particularly familiar silhouetted shape. The weapons' conservative texturing helps keep players focused on gameplay rather than distracting them with overly-wrought or flamboyant weapon modeling. [caption id="attachment_37429" align="alignnone" width="800"]

Both the pistol and sniper rifle share similar design features and textures.[/caption] Hands down, one of our favorite features of the Halo 5 beta is its sound design. It too leverages the powerful impact of contrasting elements. The metallic "ping" of the ever-power Spartan regulation pistol sits along side the bass "thud" produced by the standard melee. The devs have also included some effective in-game chatter. Warnings like "Watch their rockets" or "30 seconds to Energy Sword" help alert players to actions on the battle field while shouts of "great shot" or "nice head shot" give positive reinforcement to players. Overall, Halo 5's sounds and dialogue are designed to be both informative and emotionally supportive. These are two crucial aspects of creating an entertaining and immersive gaming experience. One of the most noticeable additions to player movement in Halo 5's beta is the boost, a sort of quasi-jetpack that lets players jump to higher levels, quickly move left or right, or use it as a melee attack. The boost can also be used to rain down a ground-and-pound, instant kill from above an opponent. This new "death from above" move is certainly flashy and will probably provide for some dramatic finishes (it's even likely to surpass "teabagging" as the best way to taunt your opponent). [caption id="attachment_37425" align="alignnone" width="800"]

Player about to execute the ground-and-pound move from above an opponent.[/caption] However, when the boost is used in simpler more common ways (like escaping), it adds a fresh, new dimension to Halo's "combat evolved." Now, you're no longer ensured a kill just by surprising an opponent and shooting them first. They may boost jump to safety or possibly dart behind another team member. The boost may seem like a subtle change, (it's certainly not unique to Halo), but it's one that's likely to bring some innovative combat options to Halo's multiplayer experience. Aside from crowd testing the game, the Halo 5 beta certainly fulfills one of its major purposes: to make us pre-order the game. While many of these added features are certainly not new to video games, they are new to the Halo Universe. The beta's sleek new design is likely to have fans continuing to fall more in love  with the game's online action as they do with its campaign.  If this year proves to be the year we see the full potential of next gen games, Halo 5's multiplayer may rank as one of the more memorable online gaming experiences...that is if it works.