Paramount Pictures and Nickelodeon Movies just released a new trailer and poster for The SpongeBob Movie: Sponge Out of Water set for release February 6th, 2015. The newest installment for the franchise follows SpongeBob and the gang on a quest to discover a stolen recipe that takes them to our dimension where they tangle with a nasty pirate played by Antonio Banderas. The CG-live action hybrid feature is a follow-up to 2004's The SpongeBob SquarePants Movie, which grossed over $140-million worldwide. Although Sponge Bob The Movie incorporated live action into its story, the characters remained 2D. Many diehard fans are expressing some ambivalence to the new Sponge Bob movie claiming it will result in an unfamiliar and inferior product. However, the new trailer highlights the opportunities 3D rendering can provide for action sequences like Sponge Bob encapsulating canon balls with bubbles. We especially liked the animation of Squidward when he gets caught within the evil clutches of the plastic six pack rings. 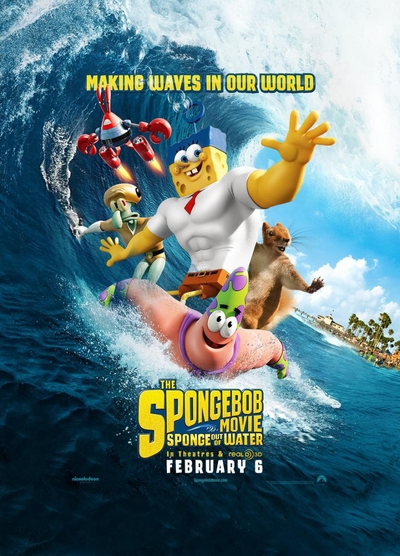 The series' move to 3D also comes with a steroid-sized jump to super heroes no less, and the new poster foregrounds the characters 3D transformation with an over-the-top mixture of adventurous surfing and hulking muscles. Sponge Bob isn't simply coming to dry land, but exploding onto it with a 3D vengeance. The loyalty of some fans may be challenged with this new move to 3D representation, but Nickelodeon seems to be putting their best foot forward with this venture into untrodden territory.