Rockstar Games released its second Grand Theft Auto V trailer for PC and the 60 frames per second visuals are quite impressive. Even though PC users are coming in last when it comes to access, they are certainly ahead of the pack when it comes to getting the lushest GTAV visuals. At 60 fps Los Santos citizens come to life in a more vibrant and immediate way--its cars shinier, its people grimier. Some of the visual standouts within the trailer are the textures and lighting that are evident within shots like the endless stream of shell casings from the machine gun. Specular light is quite nice here on the brass casings while their blurriness is adjusted correctly to mimic real world physics. 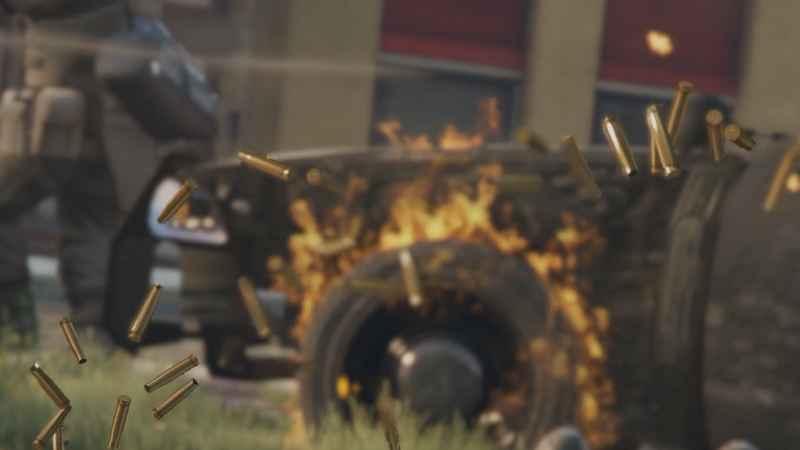 Notice the blurred casings within the center of the composition versus the ones on either side of the burning car tire. What might at first look like a mistake in the camera's focal length setting or maybe an over-zealous motion blur application within this area, actually turns out to be strict attention to detail of the render. The light hitting the center shell casings has to pass through the heat energy emitted from the fire, which then distorts the light causing a blurred image. Really great addition to the shot's realism. Rockstar's marketing strategies are always impressive: pushing online social experiences, fictional television and radio shows, and other extrinsic motivators that effectively extend the franchise's reach beyond the game itself. The GTAV trailer doesn't disappoint either. The trailer's producers do a good job of mixing slow motion with live action speeds. The 60 fps live action sequences of wall-repelling CIA contrast nicely with the slow motion firefights towards the end. 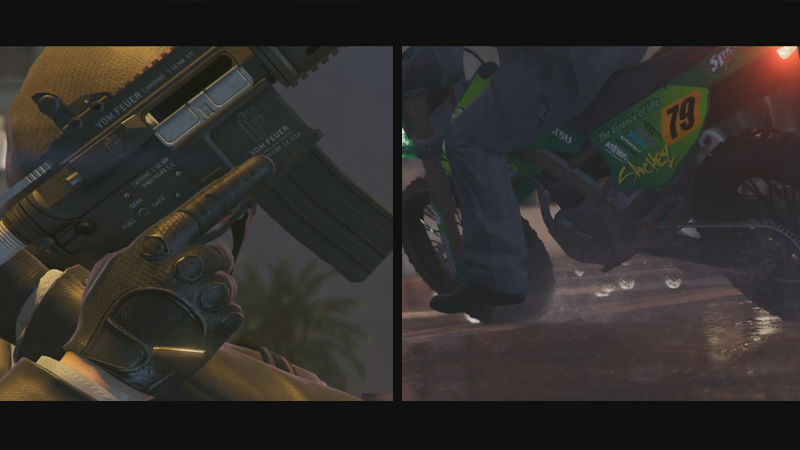 From an editing standpoint, the trailer also utilizes contrasts in composition to create tension between cuts. For example, at around 50 seconds, there is one cut that effectively juxtaposes two objects and directions: a dirt bike moving to screen right and a man carrying a machine gun moving left. The effect is a completely need image made from the two that aspires to an aggressive coolness. Let us know what you think about the technical virtues of Rockstar's new trailer for GTAV by commenting below. Or better yet point out some of its not so great moments.