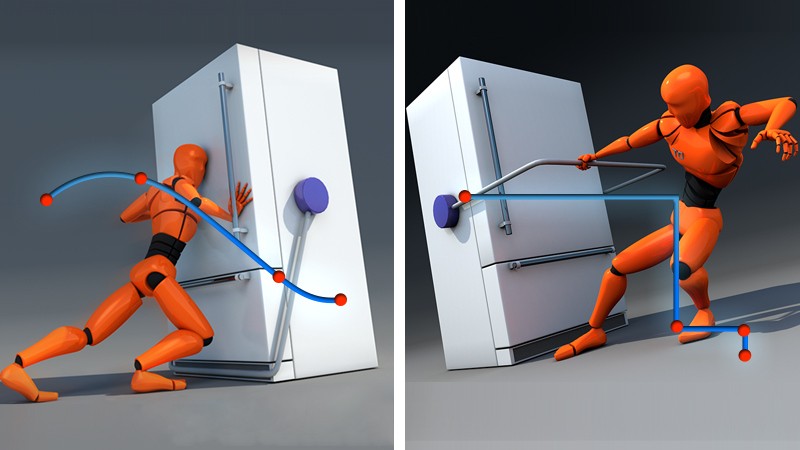 Stepped Vs. Spline Curves When Blocking an Animation

If you're an animator chances are you're familiar with the stepped vs. spline debate when it comes to blocking in your animation. To give you a refresher in case you're a bit rusty with your animation terms, both stepped and spline refers to how your keys are being interpolated. So stepped means that there is no animation created between two key poses, and with spline the computer will automatically add in the inbetweens between two key poses. Let's take a look at the benefits between each method for blocking in an animation, as well as the drawbacks and find out which technique is truly better for blocking in an animation, stepped or spline curves?

The Benefits of Stepped

One of the biggest benefits to working in stepped mode during your blocking phase is the fact that you can really focus on the key areas of the animation. Creating a great animation is a long process, and it involves many different elements to bring it all together. During the blocking stage of an animation, one of the most important things to get established is the key poses for your shot. Being that in stepped mode, the software doesn't interpolate between any of the keyframes it allows you to not be distracted by how the computer is actually moving between each keyframe, but rather the poses for your character. As you're probably familiar with, whether you've watched our courses or studied animation books, a very important part of an animation are the poses themselves. Stepped mode also allows you to keep your scene very clean, and you're able to tell the story of the animation with very minimal amount of keyframes. In addition,  it helps to really establish the important beats of the animation. You can see an example of blocking out a body mechanics shot in stepped mode in the video below. Watch how it plays out the animation without interpolating anything between the keyposes, so you can still get a basic idea of the timing, while focusing on the key ideas of the shot.

The Benefits of Spline

Spline allows you to work more straight ahead and organically. Depending on the shot, sometimes just going at it full force can be the way to go, and with spline you're really able to get a feel for how your animation is going to be played out very early on in the blocking stage. Since the computer is actually interpolating between each keyframe you're able to get a strong grasp of how the timing for the animation is actually going to look. If the timing doesn't work you can quickly shift keyframes around until you get what you're looking for. When first beginning an animation, you can still basically work in stepped mode as you're trying to create the key poses by simply flipping through your keyframes without playing the full animation. That way you can still focus on just the posing, and not worry about the animation. It's also much easier to incorporate things like follow through and over lapping action. In the example below it's the exact same shot but it was blocked out in spline mode. You can see that the computer is interpolating between each key pose, and you're able to really see how the animation is going to look early on.

The Drawbacks of Stepped

One of the big drawbacks to stepped mode is that it can be difficult to really see how your timing is going to turn out. Often times, when converting an animation from stepped to spline, animators run into a problem where the animation becomes like mush, and it doesn't have the same snappiness as before. That's because each transition is happening over a single frame, once you have the computer interpolate between those keyframes, it can really slow things down and the animation won't have the same feeling as before. This can mean that there are a lot of tweaks that need to be done once you convert to spline. However, there are techniques you can use to eliminate this from happening in the future.

The Drawbacks of Spline

When blocking your animation in spline mode, it's very easy to get distracted by the interpolation of the keyframes when you should  just be focusing on the posing or timing. For example, when working in spline mode you might start tweaking little things such as knee pops, weird rotations or messy arcs. While these things are important, when blocking in an animation you shouldn't be focusing on these areas at all. 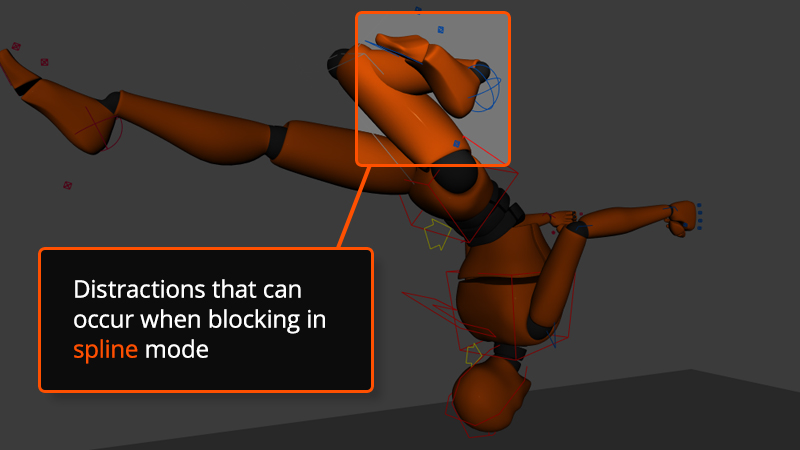 If you refer back to the spline example you can probably spot quite a few areas that need tweaking, and your first instinct is to go in there and fix all of them because their right in front of you waiting for you to adjust them. However, this early on in the animation you don't need to worry about these small issues. It's also hard to work cleanly, and a simple action may require several key poses in order to describe the action properly.

It's important you try both methods out and see which one you prefer, because it really comes down to personal preference, and how you like to work. Of course, one method might be better than the other depending on the scenario. For example, if you have a relatively short shot with a simple action, and a time crunch then spline is likely the way to go. Because it's much faster to get the feel of the timing and create the poses you need in spline mode, and there also isn't the surprise that often occurs when you switch from stepped to spline. With either method that you choose you should still have planning in place. Even if you block your animation in spline you need to have an idea of what it is you're going to animate. While blocking in spline allows you to work very quickly it doesn't mean you should forget everything you know about properly planning an animation. A shot where the actions are very subtle, for example, in an acting shot it's often easier to create those small movements if you're in spline mode. So you can get a feel of how the character is transitioning between each pose. If you're in stepped mode it can be hard to figure out those subtle actions that make for great acting shots. Taking the stepped approach for blocking out an animation you'll be able to focus closely on the key poses, and really get the story of the animation set in stone. With spline it's much more straight ahead, and it's also good because you can really see exactly how the timing is going to work out very early on.

The only way you can really decide what works better is if you try each method out for yourself and determine what you find easier for your workflow. There are some scenarios where blocking in stepped mode is better, and there are scenarios when blocking in spline mode will work best. It's up to you to decide when to use one over the other. Up to this point you may have only based your decision on the fact that you found out someone at Pixar blocks in their animation using stepped curves or vise versa, so it must mean that's the best way to do it, right? However, even though Pixar has amazing animators it really comes down to what works best for you, and how you enjoy to work.