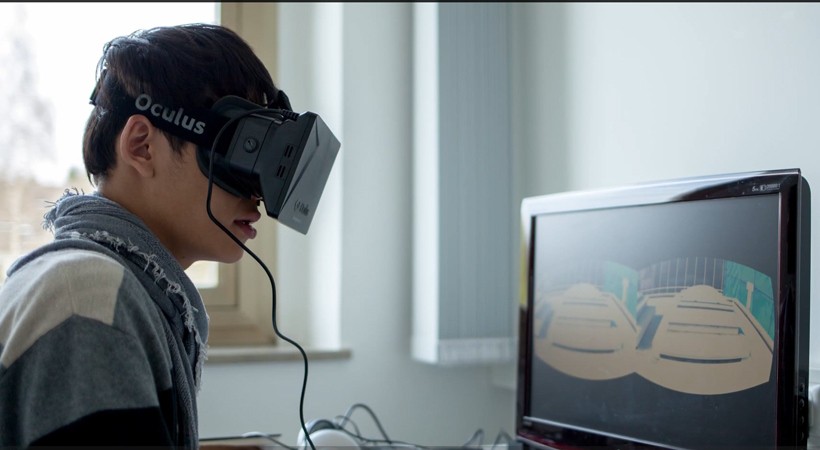 Video game enthusiasts and university students, Nguyen Duong (Kenji)and Felix Droessler, have produced an animated VR short called "Infinite Travel" that is designed to be used with the Oculus Rift. Their assignment was to take motion capture data gathered from dancers and convert it into a type of digital representation. Kenji and Felix decided to create the short as an interactive, 3D experience that would interpret the speed, motion path, and time of the motion capture data in a unique way. Infinite Travel takes the viewer on a trip through several different environments where objects and landscapes are constantly changing. The film's models were built and animated in CINEMA 4D while rendering was done in V-Ray. Converting the Motion Project’s tracking data was done using a plugin that was written specially for this project, which made it possible to transfer this data to objects and particle systems. In addition, XPresso and Thinking Particles were used to convert Motion Project data for the animation, which featured no human performers. With Infinite Travel, the user is taken on a journey while remaining in place. As the animation continues, the journey’s destinations emerge from the environment, which itself is constantly transforming and evolves from a medieval town to a nebulous world and ends in a steppe landscape with blue skies. At 2 minutes, Kenji’s and Felix’ animation is quite short but considering the fact that the images’ 360° perspective and their stereoscopic set up with a position offset of 8 cm meant that a lot of rendering was involved: the images were not only large but also had to be rendered twice. Precise planning and maximum optimization of objects and materials were required to produce render times that could be realistically achieved with the resources at hand. Rendering was done with V-Ray. After Effects and special editing tools from the Oculus Rift developer pack were used to complete the film. Infinite Travel is not only an interesting approach for letting viewers experience motion data in an unorthodox manner but is also an interesting experiment for the creation of new content using the Oculus Rift head mount display. Source: Maxon