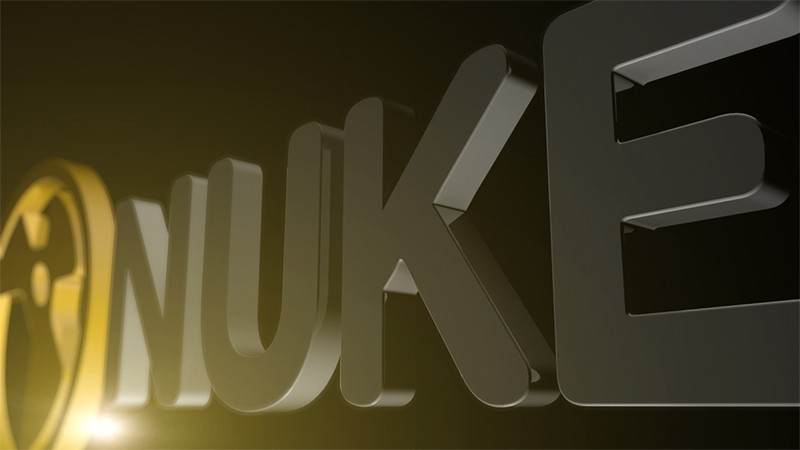 Take the Fear Out of Learning NUKE by Understanding the Basics

NUKE is an incredibly powerful node-based compositing software that can seem really intimidating at the beginning. When you’re first starting to learn any new software, it can feel like you’re drowning in an ocean of things you don’t understand. It can get even more frustrating because you have all of these ideas you want to bring to life. You can see the potential for realizing those visions, but your skills are just not where they need to be to execute. Instead of deciding that this new software isn’t for you, lean into the fear, embrace it and, eventually, master the tools that you need in order to make your creativity become a realized and tangible work of art. So how do you lean into the fear and in this case, start learning NUKE? Take it one step at a time. Really, don’t let the fear of the unknown allow you to accept the crippling complacency of the repetition of what you already know.

Leaning In and Understanding the Basics

The first thing you need to grasp when learning NUKE is the union of two images.  That’s the heart of compositing: bringing images together to make something new. In NUKE, you’ll use Read and Merge nodes for this. Read nodes are the input of the file of information; the representation of the image you want to composite. Pretty simple.  You can drag an image into NUKE, and it’ll automatically create a Read node just by the image now existing in NUKE. Merge nodes are a bit more complex. The hardest thing to understand about Merge nodes is how to hook them up and in what order the information should flow. 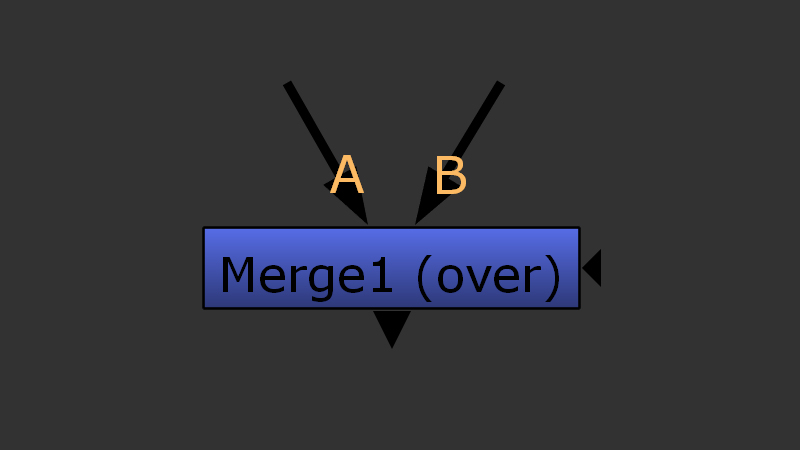 The Merge node has two immediate inputs. One is for the background image and one is for the foreground image.  The background image will plug into the first input, which is the “B” pipe, and the foreground will plug into the “A” pipe. Let’s say you want to place a robot in a street scene. The thing you take for granted is that the robot will be on top of or in front of the street. Acknowledging this will help you with the next step.  The street scene will connect with the “B” pipe and the robot with the “A” pipe. 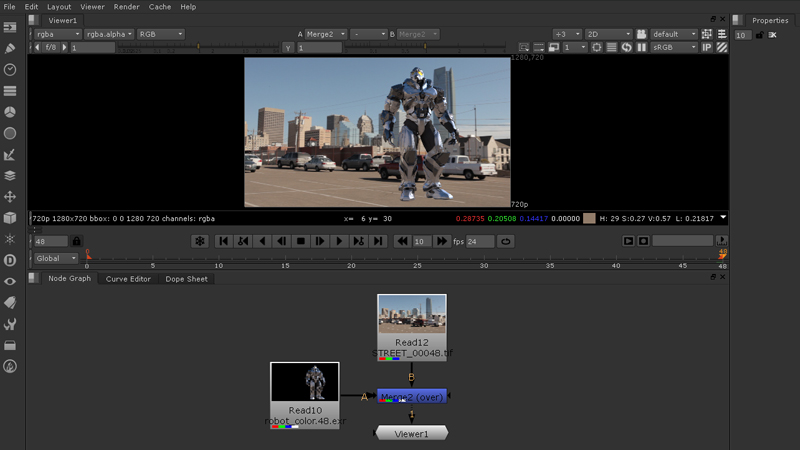 This can be confusing for some people because in the alphabet “A” comes first. So it would seem logical that the background would plug in with the “A” pipe, because it’s the first input of information. However, when you start to understand how the flow of information works in NUKE this setup becomes much clearer. Don’t think so much of the “A” and “B” as an order of the alphabet but think of them as a “B” as in “background” or “before” and an “A” as in “addition”.  This’ll help you to remember that whatever you want to “add” to your composite will plug into the “A” pipe. This setup preserves the flow of information so that each time something needs to be added you can know where in the node tree to place it based on your desired order of images. For instance, let’s say you want to add a piece of rubble to your composite. You want this new image to go behind the robot, but obviously you want it to show up on top of your background. To execute this, you’d want to move both the Merge node and the robot’s Read node down to make room in the tree to add the rubble information. Then, you read the word “add” and that means you’ll need another Merge node to add this information. So you add another merge node and hook the “A” input into the rubble because it is what you are adding. Now you need to decide what the other input, the “B” needs to plug into. If you know your rubble needs to go on top of the background, you’d hook the “B” pipe of the rubble into the background. Now, you’re faced with a new decision. You still want to have the robot be a part of the shot, but it’s no longer connected to the tree. 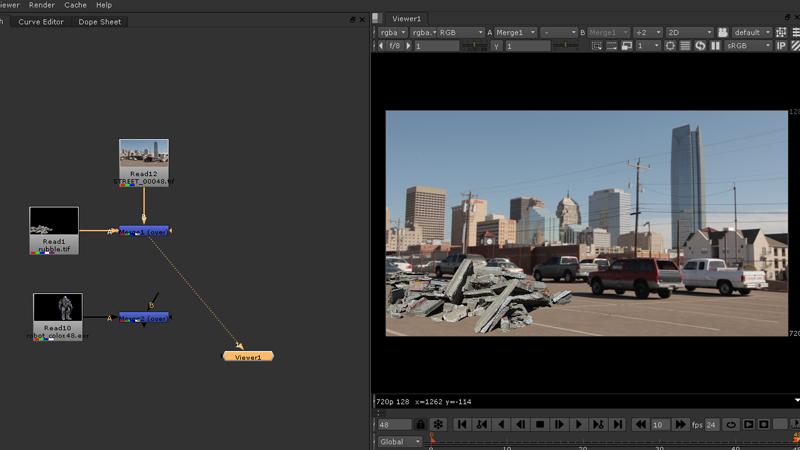 Think of the street scene Read node, the rubble and their Merge node all as information that came “before” the robot. They;re now the entity of what came before the robot. As a result, all you need to do is plug the “B” pipe of the first Merge you created into the Merge for the street scene and rubble. You now have a union of three separate images coming together to create one thing. 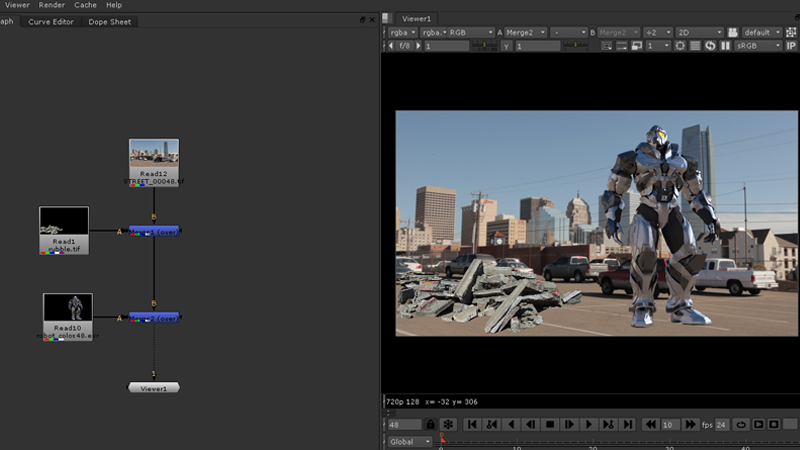 The concept of adding an image with a Merge node and using the old Merge as a jumping off point to add the new image will soon become second nature.   You’ve now created a composited image. That’s pretty amazing to go from knowing nothing to joining images together! You’ll need many more nodes to create beautiful composites, but understanding the merging system is your first hurdle to clear. If you want to know what comes next, check out Getting Started in NUKE. This is a great NUKE tutorial for beginners to go from knowing nothing to ending with a composited image you can be proud of.