Exaggeration can be one of the most enjoyable principles to put into your work because with it you can push your character rigs to the limit and create animations that are more appealing. You can put in a lot of exaggeration into an animation to create more stylized cartoony work or use it sparingly to breathe just a little more life into a realistic style of animation. As an animator it's up to you to determine how far you want to push your animations. Exaggeration is one of the 12 principles of animation which was created by the pioneers of animation in the early 80's. While the other 11 principles are equally as important this article is going to focus specifically on the principle of exaggeration so you can learn how to implement it into your animations to create more appealing work.

Why is Exaggeration Important?

Animation is the art of bringing things to life; almost all animations are grounded in at least a bit of realism. The 12 principles were created to help other animators understand the basic laws of physics and how to create animations that followed these laws. However, what you see in real life doesn't always translate well to animation, and that is where the principle of exaggeration plays a key role, without exaggeration an animation can feel boring and lifeless. As an animator you'll work with video reference in most of your shots and you'll quickly find out video reference can be your best friend when trying to find interesting posing and timing that is grounded in realism. What you see in your video reference doesn't always work well in your animations. As an animator you have complete control over what the audience sees. One of the greatest things about animation is the ability to create animations that don't have to obey the movements of real life and this can result in some very interesting animation that brings a whole new feeling to the viewer. Let's face it; a human's movement is not always the most interesting thing to watch, and with animation you have the chance to take the foundation of real life physics and spice it up with exaggeration to make it something much more interesting and fun to watch, something you don't see everyday.

You might be wondering how can you exaggerate something when you must work within the limitations of the character rig, but you shouldn't be afraid to push a rig beyond its limits. Rigs can be broken, and what looks strange for one frame of animation will often be unnoticeable when played back at full speed. Test the rig you have, find the poses that are just on the cusp of breaking the rig, find the limitations you have and how you can work around them and see how you can break the rig to your advantage. 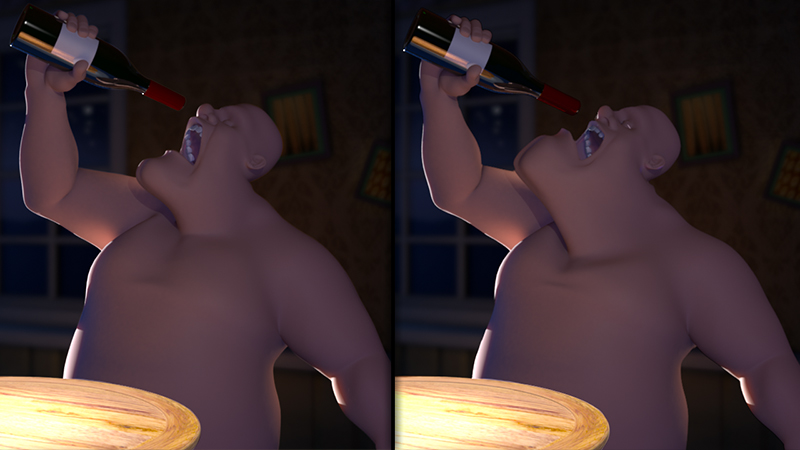 How Far Is Too Far?

As mentioned earlier, exaggeration can be a small amount. It can be something as little as pushing the timing of an action by a couple frames to as broad as your character becoming completely compressed just before a jump. It depends on the animation, if your shot is more on the realistic side you won't want to exaggerate it to a point where it becomes cartoony. That being said, there should be some type of exaggeration in any shot you do, even if it's simple timing or spacing exaggeration. It's important to point out that exaggeration doesn't always mean you need to go for a Bugs Bunny type of animation. You'll know when you've gone too far, but a great rule of thumb is if you notice when playing back your animation that your rig is broken you've probably gone too far. A rig should only be broken for 1-2 frames, any more than that and it will become noticeable by the viewer. Similar to the principle of squash and stretch, you want to feel it rather than see it. Depending on how cartoony you want your animation you may have your rig broken for more than 1-2 frames, as long as it fits the animation style you're going for.

Pushing your posing is one of the best ways to exaggerate your animations. This doesn't mean you have to break your rig, but by pushing a pose even just a little further can create so much more appeal. Exaggerating your posing can help sell the weight of your character, the weight of an object, and overall will create something more interesting to look at. Don't feel like you need to follow exactly with the poses in your video reference. As mentioned before, what you see in real life isn't the most interesting and doesn't always translate well to animation. Sure, there are times when you've matched the pose exactly as you see it in your reference and it works, but most of the time you will want to find places where you can push your posing. A good way to do this is first create the pose you see in your reference, and once you're happy with it go back and figure out how you can push it to make it more interesting. This can be something as simple as extending the arms out further during a walk or more noticeable like in the images below. 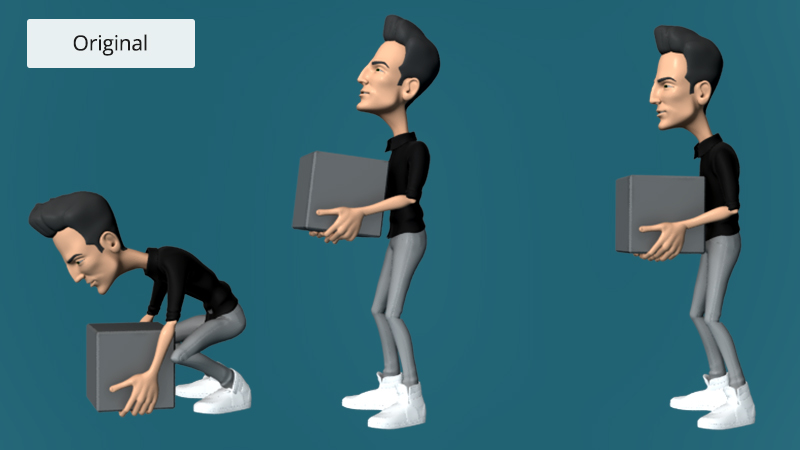 Here is a great example of how pushing the poses can make your shot go to the next level. The point of the animation is to have the character pick up a heavy object. The poses are based off of what was in the reference. Sure, they work but they could be even better!

In this example the key poses have been pushed, look at how just changing these three poses makes the object feel heavier, and creates something more interesting to look at. Yes, the original poses from the reference worked, but as an animator you have the freedom to work outside of what happens in real life.

Exaggerating timing is another way you can help sell the weight of your character and create something more appealing to watch. Typically when you're animating you're following closely with the video reference. It's important to only use the timing in the reference as a guide. Of course, there are scenarios when the timing in the reference just works, but most often you'll want to push the timing. A perfect imitation of reality can result in very floaty and dull animation. You can see in this video example of a character jumping, the poses have been exaggerated slightly, but the timing is based off video reference. Doesn't it feel a bit floaty? Just because it's real-life timing doesn't mean it will work well for your animation In this clip we took the same animation and pushed the timing on the take off and the descent. Now the character feels much heavier like he's being affected by gravity. There wasn't a need to do any crazy changes to the poses; by simply exaggerating the timing a few frames was enough to breathe more life into the character. It isn't a huge change, but even something as small as that can go a long way. Now that you have a better understanding of exaggeration, and how it can be implemented try using it for your next project. Remember, exaggeration can be broad or something simple, like pushing the timing which you saw in the example animation above. To learn more about exaggeration watch the 12 principles of animation tutorial. If you have any questions share them in the comments below and feel free to post your animations in our community forum to show how you've used this principle in your work!