When it comes to plug-ins and addons they can either be a welcome feature that can significantly speed up production or be a buggy mess. Blender has a thriving development community that is always creating addons for the application that range from Animation tools to new 3D navigation features. When you’ve found an addon that speeds up your workflow soon you wonder how you ever lived without it. One such addon in is the Rigify addon, which is an automatic rigger. Depending on who you ask, automatic riggers should be avoided at all cost, and others enjoy the helping hand when it comes to rigging. Sure, nothing can ever beat a talented TD that creates the rig the ol’ fashioned way, but sometimes, depending on the production deadline, you may not have the time to spend on creating a robust rig. Maybe you’re a character artist that just wants to pose your character out for a render and spending hours setting up a rig just isn’t worth it. Whatever the case may be, in this article we’re going to go through setting up a rig using the Rigify plug-in for Blender. The first thing to note is that Rigify is an automatic rigger that creates all the body controls, head, legs, arms, hips, etc, but the facial controls are still up to you. Rigify is also an automatic rigger, not an automatic skinner. The skinning process is still up to you, so while it would be nice to click one button and have everything be completed for you there is still going to be some leg work involved.

By default, Rigify is not enabled in Blender, like most of the addons you’ll need to activate it to utilize its features. Blender actually has a list of community and official addons you can search for directly in the User Preferences. 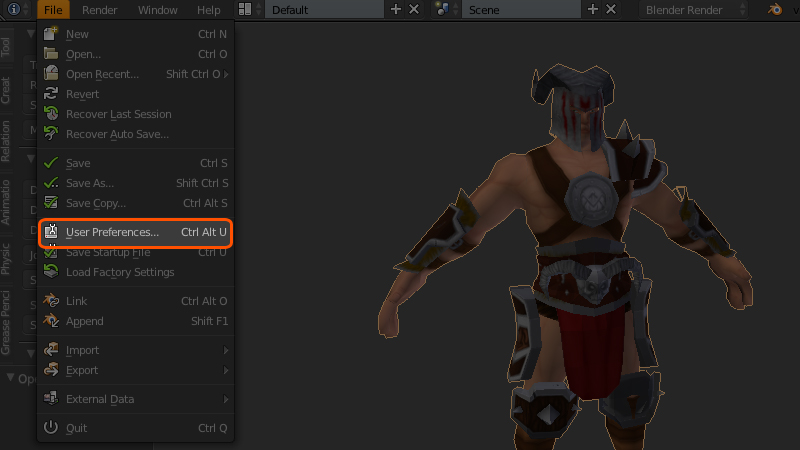 To find this list, first go to File>User Preferences. 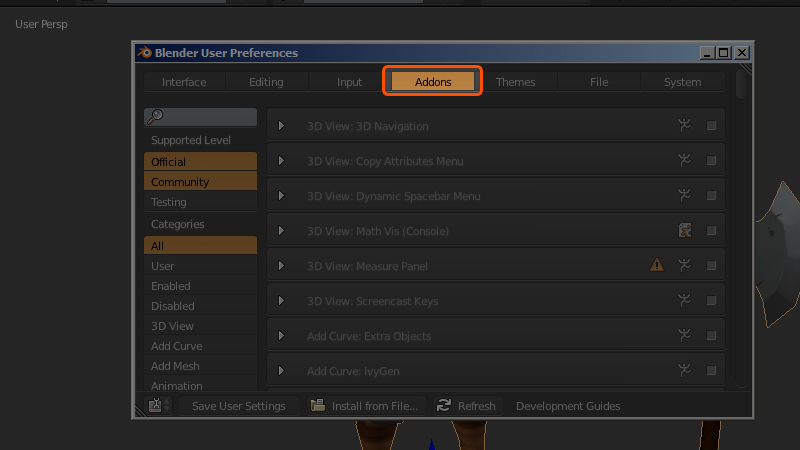 The User Preferences window should now appear. At the top you have a list of tabs, select the Addons tab. 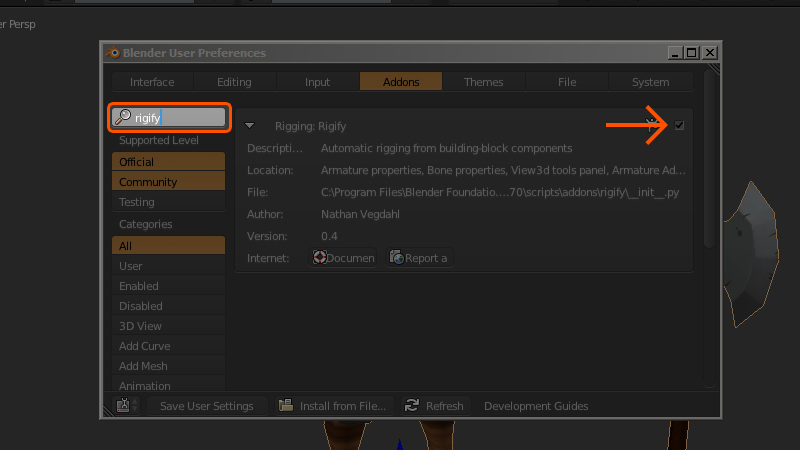 In the search box type in Rigify. This will display the addon information. You’ll want to check the little box to the right to turn on the Rigify tools in Blender. And with that, the Rigify addon is now enabled.

I’m going to be using our Warrior character which you can download the .Blend file here: Warrior_Character. This is the file we’ll be starting with. 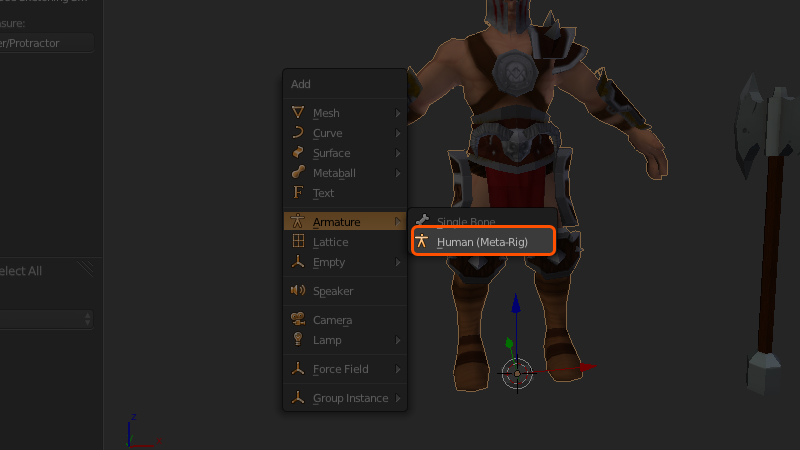 So the first thing we want to do is drop in the Rigify Armature. To do this press Shift+A while in Object Mode and choose Human (Meta-Rig). If you didn’t enable the Rigify addon beforehand, this feature would not be visible. 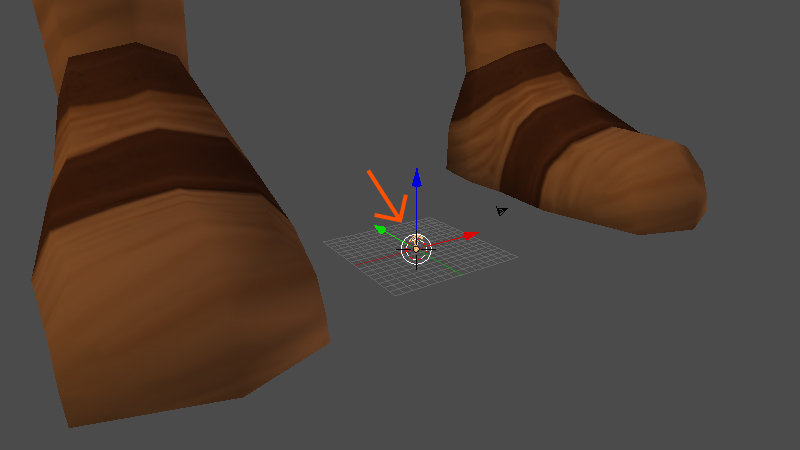 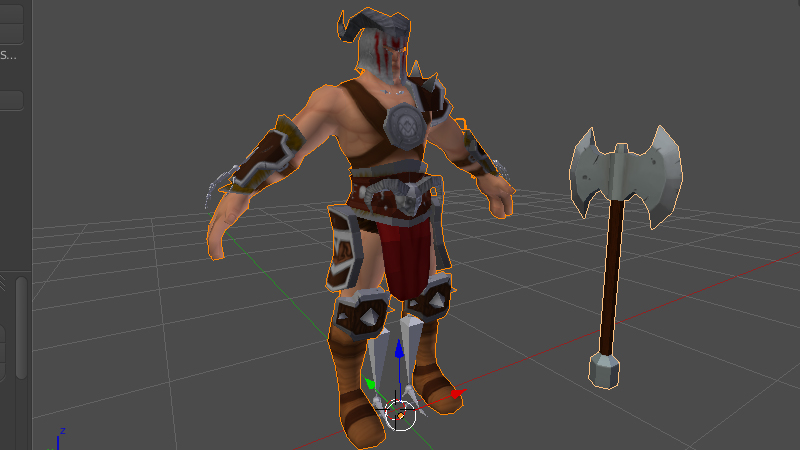 Select both the character mesh and his weapon and scale him down until the armature is roughly the size of the character. It doesn’t have to be perfect, we’ll make further adjustments later. 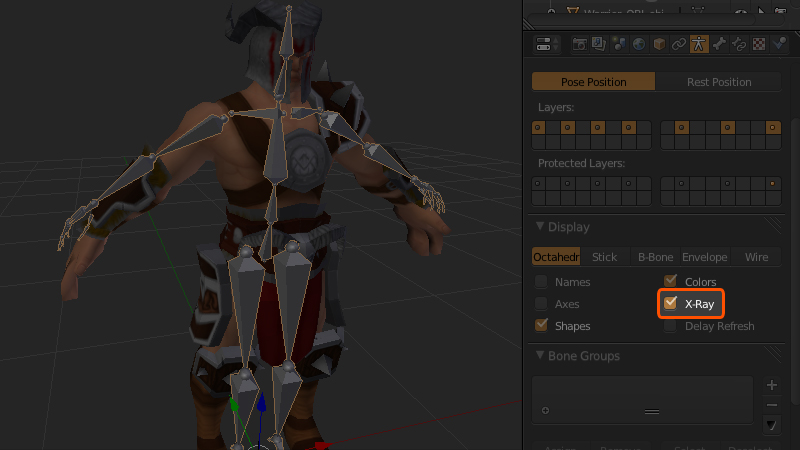 To make it a little easier to see what you’re doing, select the armature, and in the Object Data properties enable X-Ray. 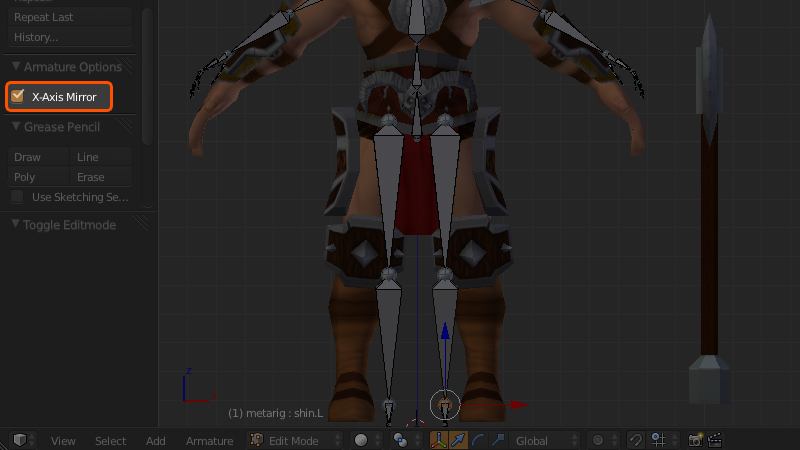 Now we just need to move the individual bones around to fit better within our mesh. Go into Edit Mode and select one of the joints. On the toolbar on the left hand side under the Armature Options enable X-Axis Mirror. This way, when you move a joint on one side of the mesh the movement will get copied over to the other side. While still in Edit Mode you can begin fitting the bones into the mesh, making sure it lines up well from both the front and side views. Like I mentioned earlier, the Rigify addon doesn’t do everything for you, there is still some tweaking required.

Once you’re done the armature should resemble the image above. When you’ve gotten to this point you’re now ready to generate the rig! So let’s do that next. 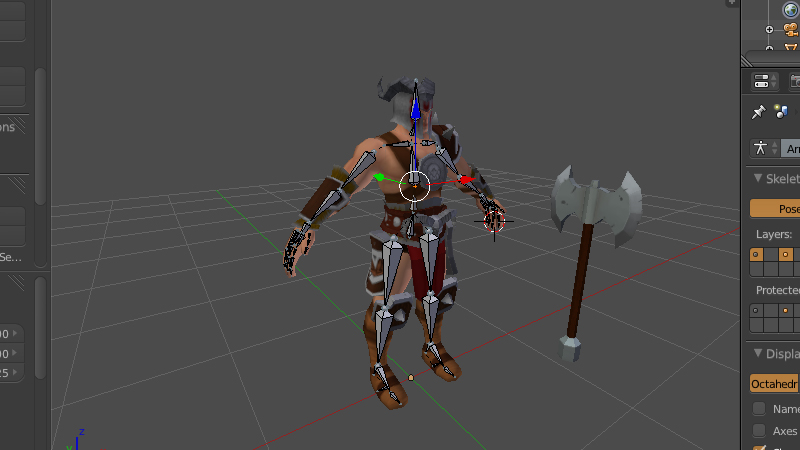 Open up the Armature properties and scroll down to the very button until you come across the Rigify Buttons dropdown. Here you’ll see the “Generate” button. This is the bad boy you want to select. So make sure you have the armature selected in Object Mode and choose “Generate.” (Keep in mind this may take a few seconds) 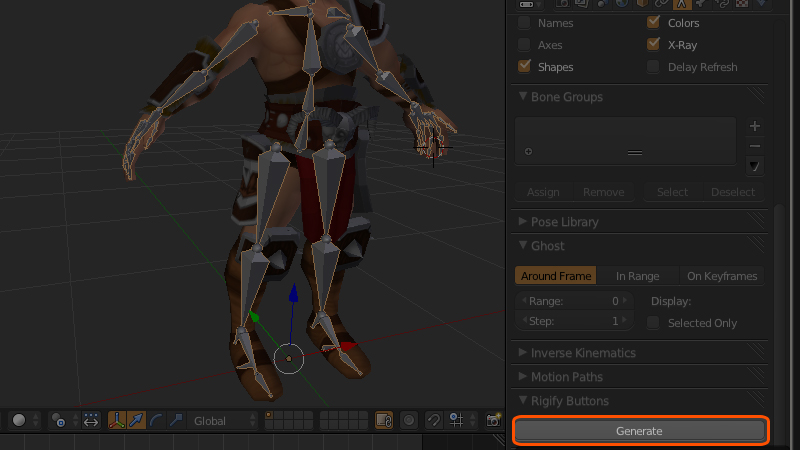 Now you’ve got a rig that has all the controls created for it and is ready to animate! Well, not exactly. At least, not yet. We still need to bind our character to the armature.

We actually have two armatures now, the “metarig” and the “rig” armature, which you can see in the Outliner. Select the metarig and hide it, because we don’t really need that anymore. 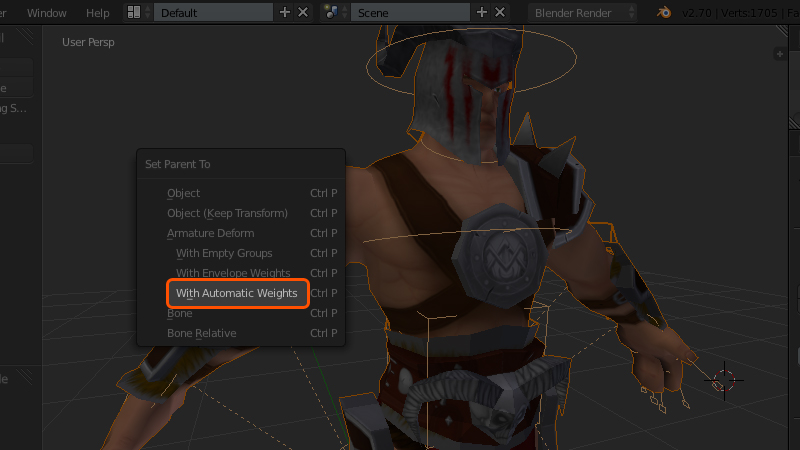 Now, while in Object Mode select the character mesh and shift select one of the control curves and press Ctrl+P and choose With Automatic Weights. This will bind the armature to our mesh, so now we can start experimenting with the controls to see what Rigify has given us. By default our legs are set to FK, which is not really what you want the legs to be. Usually, you want them to be IK. Luckily, Rigify gives us both options which allows for a very robust rig. 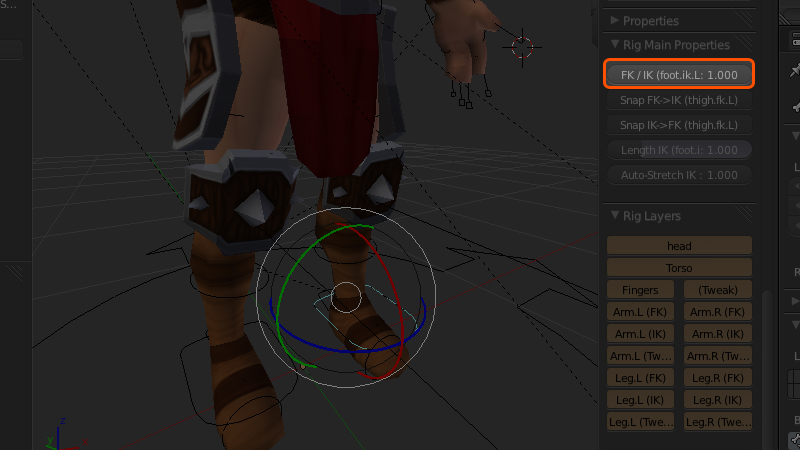 Select one of the foot controls while in Pose Mode and open up the scene properties window by selecting the little + icon in the viewport and scroll down until you see the Rig Main Properties menu and dial up the FK/IK foot property to 1, which turns on IK. Repeat this for the other leg as well. 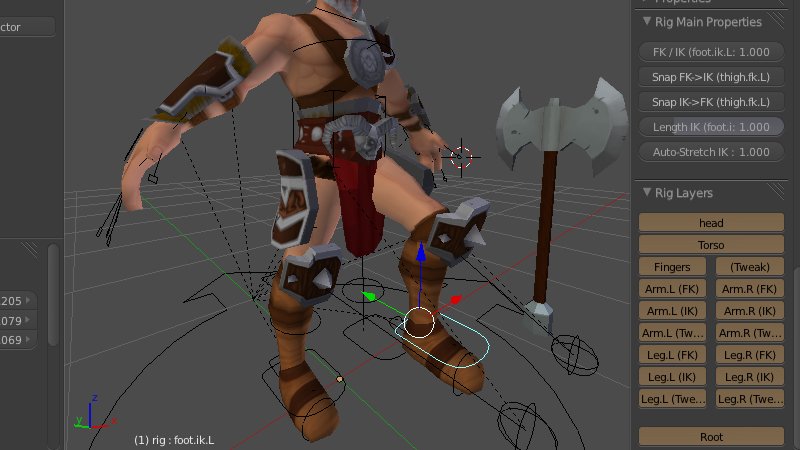 Now when we select the foot control our leg moves how we would expect an IK leg to move. You can do this same thing for the arms, if you'd rather work with IK or FK. 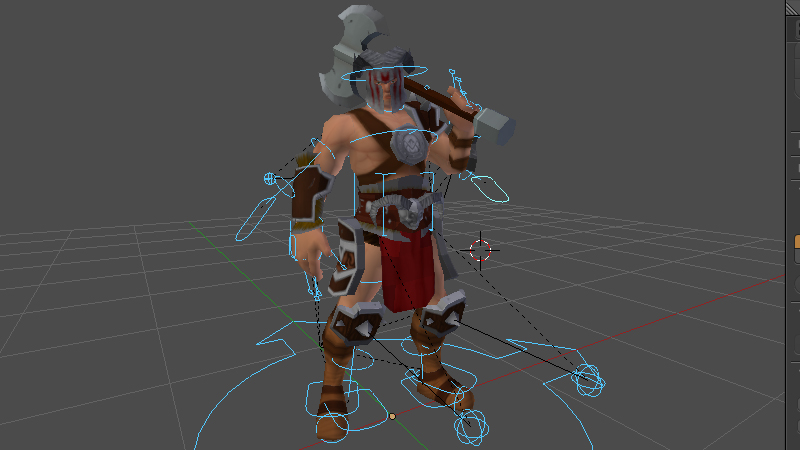 So with automatic weights we can see some decent results, but since our character has quite a few pieces of armor we’re definitely going to need to do some skinning to make sure everything deforms properly. However, even though we have to spend some time skinning you can really see just how beneficial the Rigify addon is. In just a few minutes we created a robust rig that features IK and FK arms and legs as well as foot roll controls. If you want to learn the skinning process inside of Blender check out the weight painting in Blender tutorial.